Firstly I have to admit that as soon as this bust was teased, I was excited. The original Tooth Fairy bust was the first bust I ever finished and I’ve been craving some creature painting so this ticked all boxes. This new version in comparison is a smaller scale and computer sculpted rather than a traditional sculpt, but doesn’t lose any of the concept arts character and even comes with clear resin wings. When I say "smaller scale" it's a little misleading as compared to most busts on the market this is actually a scaled up design rather than a miniature. 2/1 is effectively double the size of an actual tooth fairy (theoretically of course).

Packaged in the standard BrokenToad card box; you get a total of 9 parts in three zip lock bags, sandwiched between two layers of foam for protection. Main body, head, and tooth in one, two sets of arms in the second, and two clear wings in the last. There is also one of BrokenToad's fancy cards in the box to show it's a 100% genuine product which is always a good thing. 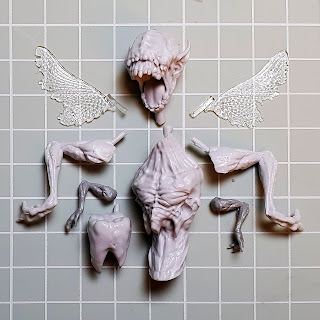 As expected for BrokenToad resin casting, the quality is high and mould lines are minimal and easily accessible to remove. There are some tiny air bubbles but you need to be careful as there is some which actually look like they are part of the sculpt, especially on the large tooth. Lastly there are some leftovers from the pour holes. None are in vital areas and are easy to clean up. The joints between parts are excellently planned and shaped to minimise gaps and make assembly easy, though as always I highly recommend dry fitting so you can work out the painting process.

Now I did have a bit of confusion with the wings as they were sticky to the touch so I asked BrokenToad if this was right. The clear resin does take a little longer to fully cure and can become a bit tacky when in the bag. Just leave the bag open for a while so air gets to the wings and this will cure it. The detailing on the wings is quite good, almost fly like, but I feel they are a bit flat in comparison to the rest of the sculpt. More recently though the casting has improved even more so this is no longer an issue, though I did also find a layer of gloss varnish helped too.

So then; the design and sculpt itself. I'm guessing someone in the process is a fan of creature type films as this could easily fit into a horror film with its eyeless, fleshy head. Veins are visible in multiple places across the body and the physical structure is human like in places (chest and abs for example) but is quite outlandish at the same time. Its mouth and teeth really are a focal point and really show an attention to detail by Russ. Each tooth has had its own sculpting and it really adds to the monstrous feel of this bust, which is interesting as it’s essentially twice the size of an imagined real tooth fairy. I'm sure we’ll be seeing some pretty inventive paint schemes created on Open wide. 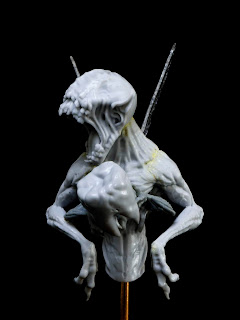 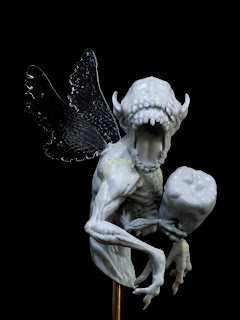 Again; BrokenToad have managed released another excellent bust kit with plenty of detail and character. Great to see Tooth Fairy recreated and available again too as there is a lack of proper creature busts and figures available outside of the garage kit market.


Very happy to recommend adding this to your collection. It may be a little complex to paint due to having multiple arms in quite a closed pose but it is well worthwhile to have some fun with some non-human skin colours and effects as I have been doing lately on this very bust.

Make sure you give BrokenToad a like on their Facebook page to keep up with their releases.
Written by Steve Haydon (Forté) on Tuesday, May 28, 2019
Email ThisBlogThis!Share to TwitterShare to FacebookShare to Pinterest
Labels: 2/1 scale, 2019, BrokenToad, Bust, Fantasy, Resin, Review, Russ Charles, Unboxing