Since Rage Craft Studios was founded back in 2015 they have had great quality right from the off.

The black box with the metallic red logo is very simple but eye catching and this new piece comes in that same style box. 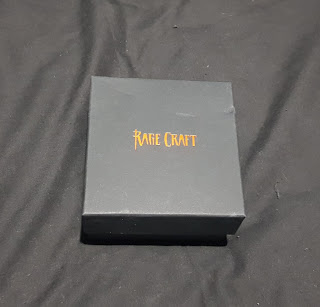 Unfortunately the postman was not to careful with this package, but hey you see what i mean...

So; as Rage Craft release their new piece, the Fallen Queen, I would like to take this opportunity to take a look at the previous release, The Banshee.

The Banshee is the first of the Rage Craft range to be made in 75mm size. The miniature is still very much intended to be used in gaming but was designed very much in the same vane as the demon princes in the Games Workshop world where the character pieces are of a larger size but still represented in the 32mmm size format.

So what about the miniature is different from the rest of the Rage Craft range?

Well the size is the big one... pun intended.

This miniature was aimed at display painters as well as gamers. I feel this is quite a good idea from any company as it opens up the range to more than table top use.

The Banshee was originally made in resin with the spiked helmet only with the flames (or smoke if you desire) rising from the top of the head but after a few tweaks Rage Craft released the Banshee with a second head option of which is a very beautiful female face with long flowing hair. This opens up the miniature to many interpretations on the painting table.
Looking closer at the miniature we can see this has been digitally sculpted with a lot of thought going into it and the detail shows through. 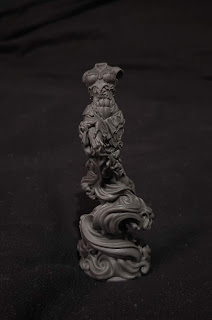 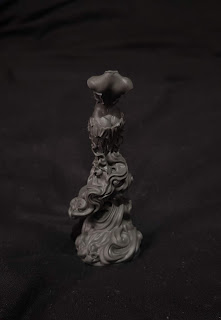 From the ground up the ethereal swirls twist and curl around the figure as she is spawning from the mystical realm to claim her prey. I like this detail a lot. The skulls that are part of the mist are very cool and the hands that seem to lift her up through the swirls are a great touch too. 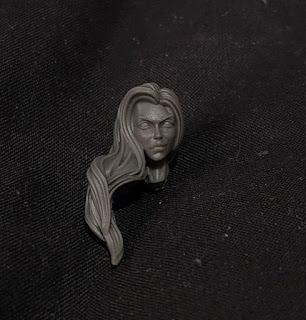 As mentioned above, the additional female head opend the piece up to display painters who are more inclinded to choose a more feminine view but either option will look very nice once completed.

How to paint it? Well that’s another matter entirely. 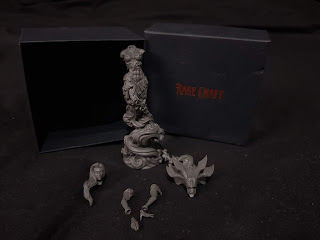 The miniature comes in 8 pieces. The torso being the main part, from the ethereal mist raises the upper body; this has open sinew and muscle structure like the body is forming as she spawns. There is upper body clothing and breast armour with some nice detail sculpted into it. It will be hard to find a paint combo that hasn’t already been done for this piece but I have ideas. 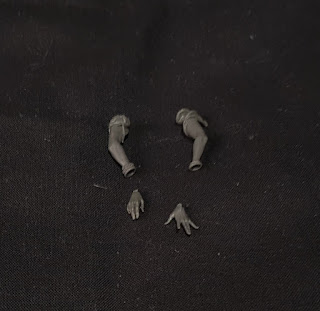 The Banshee has separate arms and hands and is designed with her arms open as if she is saying "come to me". The hands are sculpted separately so you can position them how you wish with just a little work. This will also change the perception of her intent from either passive to aggressive and if you warm up the resin you could even bend the fingers more again changing the way she seems.

personally i would have liked the torso to have come in 2 pieces and have the rage craft guys design an option to have the banshee dirfting along the floor as an added extra but maybe a conversion could happen in the future, who knows?

so is the miniature worth the price?

most 75mm miniatures reach around £30-$40, so i would say yes its good value specially with the design extras that are included and the process  to work the cuts out so yes i believe the price is competetive
I have had the pleasure to review each of the Rage Craft pieces in the past and this one gives many options just like the multi part options of the other kits.
I think Rage Craft put a lot of thought into their pieces and I personally feel this beats most static pieces from many ranges. I think anyone who enjoys converting miniatures would love these kits.

I have found it hard to find negative aspects with Rage Craft miniatures but I have been told that they have seemed a little small and fiddly to paint but the Banshee will surely clear that up and I hope to get it painted soon.
Check out Banshee at https://www.ragecraftstudio.com/products/banshee
The new release is out now you can see it on the site above or on Facebook as well as all the previous pieces. These are some of my favourite minis at this scale.

RageCraft Studios have also teamed up with Norsgard and are about to launch a Kickstarter for their game Fists and fangs. This can only be a great partnership.
Look for them on Facebook and follow along.

Thanks for reading and see you next time.
Written by Normski on Tuesday, May 28, 2019
Email ThisBlogThis!Share to TwitterShare to FacebookShare to Pinterest
Labels: 2019, 75mm, Display, Fantasy, Figure, Gaming, RageCraft, Review, Unboxing