Time for a little trip back in time. So far we haven't looked at any historical miniatures on GMR and even though I do not paint them as often as perhaps I should; I do have a soft spot for them and often find myself looking them over.

Recently thanks to a very supportive friend I came into possession of Tartar Miniatures 14th century European Knight (TR75-66) which was released back in 2015. 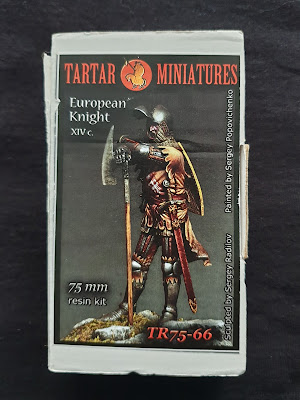 I instantly remembered the distinct box art by Sergey Popovichenko (which can be seen here on Putty & Paint) and was interested to take a look over it as I'd never had any experience of Tartar Miniatures or the sculpting of Sergey Radilov. And yes; I am still very new to the whole world of historical miniatures and there are a lot of them available out there.

So then.. this 75mm resin figure is held in a simple flip top card box. Nothing fancy but functional. Box art is stuck on with a simple colour printed sticker as you can see from the photo. Must admit I do like that both the sculptor and box art painter are clearly named.
On the left side of the box is another sticker with basic details like "this is not a toy" in both Italian and English, plus the email details and website address. Currently, the website isn't fully operational but is due to be worked on. However; El Greco Miniatures are the official stockist in the UK and have this figure priced at £33.00 (£27.50 for non-EU buyers). 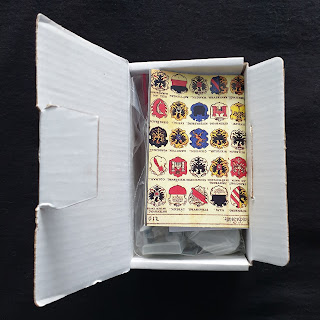 Inside is a pretty simple affair. All the parts in ziplock bags, no foam or padding (though bare in mind this came from a friend not the retailer so there may have been). 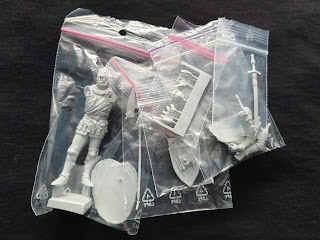 Included is a pretty cool colour card with different coats of arms for places which seem to mainly be in Germany and Italy. 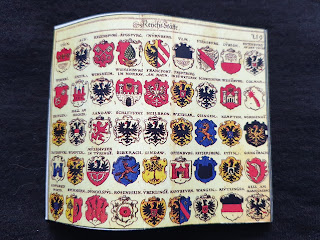 This is the sort of thing I like. It's a simple little touch but can work as a good starting point for those who like to do some research before starting their painting. 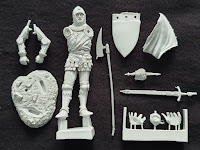 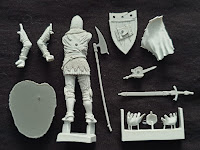 As you can see, the figure is cut into eleven parts plus a sculpted base. Some clean up is needed in places to remove extra resin from the casting process but nothing too extreme.

Starting from the top. The helmet looks to be a hounskull design with a klappvisor. Common in the mid to late 1300's from what I can tell. 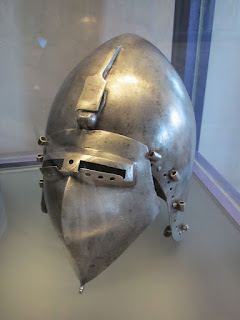 The visor could be positioned covering the face if desired but personally I wouldn't want to obscure the detailed and characterful face. 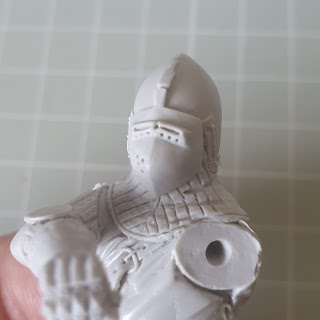 However; what seems to be my only issue with the sculpt itself is that I wish the point where the klappvisor joins the helm was sculpted more like a hinge... 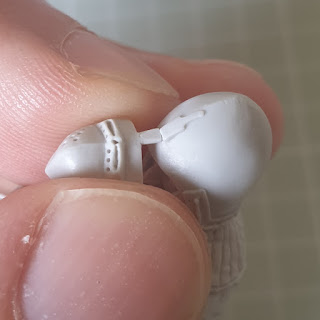 rather than the tab which needs to be removed. But that's only a small issue and more due to me being fussy. 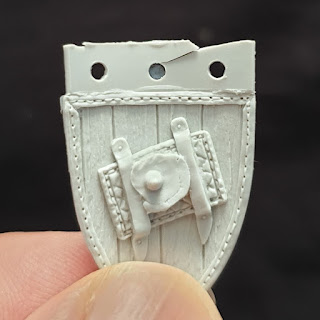 You can really see a great attention to detail on the back of the shield which is often neglected as much of it is covered. That stitching and cloth around the edge along with the padding and wood make for some really interesting areas to paint. And that tab along the top...very easy to cut down and sand. 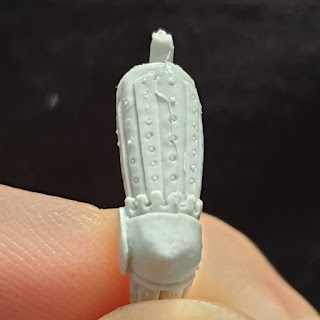 There is a bit of mould line along some detail on one of the arms but part of that will be covered and it turned out to clean up really simply with the side of a scalpel. 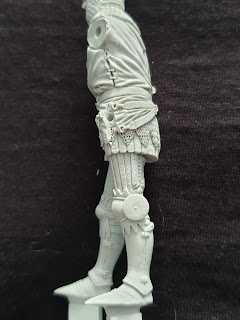 A bit of mould line around the main body section too but again, very easily removed with a little scraping and sanding so nothing to cause a lot of work. Oh...and I've not spotted a single air bubble. At all. 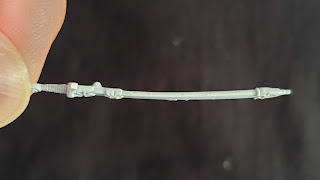 The sword in it's scabbard may have been a bit curved but a quick dip in hot water sorted that out in no time at all.

Overall the resin is really good and holds the details excellently which is lucky because there's all sorts of materials like chainmail, cloth, leather, and wood. It has a slight rubbery flex when squeezing the legs together so parts aren't likely to snap like some of the more brittle resins used by some brands. It's cuts, scrapes, and sands really well too.

Design wise, frankly...it's great. The pose is quite relaxed which makes it stand out among the many combat poses often seen on medieval figures. The way the parts are separated is well done and helps avoid too much work needing to be done with only a few small gaps needing some putty work, mostly on the cloth at the shoulders.

Just a word on the size. 75mm scale from what I understand is usually measured from the foot to the eye. This is 75mm to the top of the head so more fitting as a 70mm I reckon. 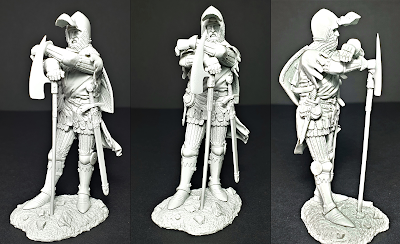 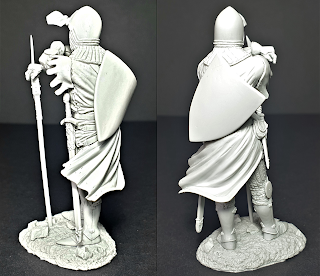 Can honestly admit that I actually am impressed with the standard of the sculpting, quality of casting, and the resin they have used. Now to add that to my painting list. Though the thought of painting some freehand heraldry does scare me for some odd reason. I suppose I really should give it a go and face those fears.

Would I recommend this? At this price for the standard I've seen; definitely.

Of note; Tartar Miniatures have a couple of other figures in this style of armour and time period which opens up potential for vignettes and dioramas.

If you like the look of this figure and want to see more, take a look at the Tartar range at El Greco Miniatures or join their Facebook group.
Written by Steve Haydon (Forté) on Monday, July 29, 2019
Email ThisBlogThis!Share to TwitterShare to FacebookShare to Pinterest
Labels: 2019, 75mm, Figure, Historical, Knight, Resin, Review, Tartar Miniatures