The Goddess from Cerberus Studios 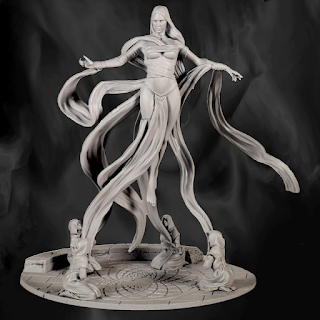 In the world of Mortals reckoning there are heroes, villains, monsters and deities. 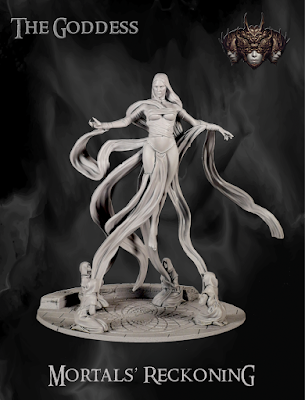 Some time ago, around early 2018, I had the pleasure to review several miniatures from Cerberus Studios. The Veiled Emissary and Lazarus miniatures and I was very happy with them. These were the launching pieces for Cerberus studios.

I have since purchased some more for my own collection, so when Benjamin told me about the Goddess I was very interested to see how this piece would turn out.

Since then the Mortals Reckoning world has grown and become a very interesting narrative based miniature range. If you do not already know about Cerberus Studios and Mortals Reckoning then head over to their website and take a read of the background and the base storyline that drives this ever evolving narrative.

In a nutshell the Veiled Emissary wants more than he has and has an agenda to gain what he wants. He twists the Warlord Kyrios’ mind into sacrificing his most valuable warrior, Diomedes, and then brings Diomedes back with a promise of revenge and to return to the arms of his love.

The Narrative is a lot deeper than my brief description but I cannot tell you every detail or you won’t need to go find out for yourself.

This review, as mentioned above takes a look at The Goddess...

The Goddess’ role in this story is one of balance. She has been watching what has unfolded and now a hero has been reborn her time of involvement has begun.

The Goddessis not your average gaming miniature, in fact she is 75mm sized piece.
She has 4 attendees who fuss over her as she drifts around her domain and they all come on a scenic tiled base. 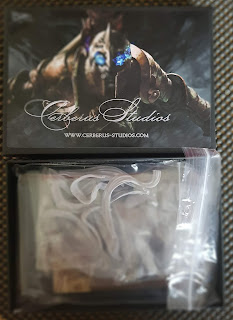 All in all there are 16 pieces to this kit and it will require some very precise assembly. For an inexperienced painter this could be tricky to tackle alone so maybe a more experience miniature builder could be nearby for guidance.

What we see right out of the customary high quality rigid black box is several Ziploc bags full of grey resin pieces. 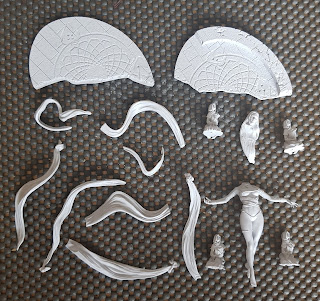 I laid out the pieces to see what was involved with the kit and my initial thoughts were assembly instructions would have been helpful, hence an experience builder would be useful to have present to work out where the pieces go. 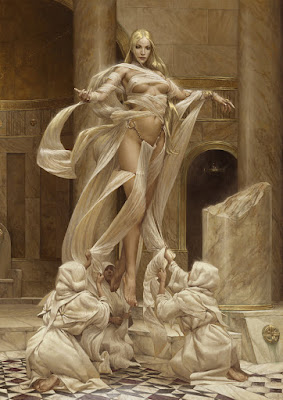 Each Cerberus Studios miniature actually comes with a very nice quality art card with some background on the reverse which I think adds to the overall quality feel to each release. The artwork on the card gives you an idea of how it goes but I can see some painters getting a little frustrated with the build. 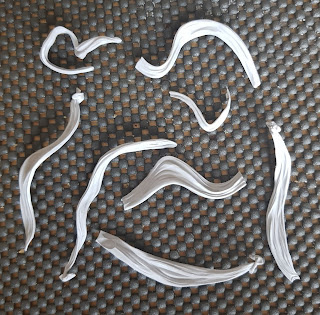 The overall quality of the piece is pretty nice. The material pieces are cast really nicely which was a surprise as smaller details usually suffer from a few mould lines due to cutting moulds but these pieces have survived the casting process nicely. However, the main torso has succumbed to the dreaded mould line. Down the right side is a mould line which runs the length of the torso that will require some attention. Due to the way the mould has been cut there is a line down the inside of the legs which is sometimes unavoidable with flash build up and the mould staying open slightly. This is not a huge issue but will just be a little fiddly to prep.

During production there has been an attempt to clean the line down the side but only to a minimal level leaving the customer to finish this. I know from past experience that if miniatures go through clean up some customers don't it as they have their own methods and are sometime unhappy with how someone else prepares a model.

As an experienced builder this does not worry me too much but I can see less experienced painters getting a bit perturbed by this as it will indeed require scraping sanding and buffing to a very good level. Especially as it is mainly skin and for a Goddess that is beauty personified bumpy rough skin doesn't sit well with the theme of the kit. 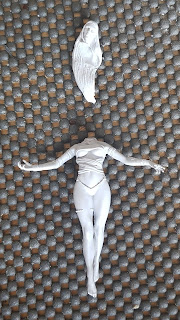 Aside from some minor casting issues the miniature was sculpted really well and printed in a very high quality as there are absolutely no print lines visible. The anatomy is very nicely done, the musculature is not overly toned and reflects the serenity that a female deity is often depicted. 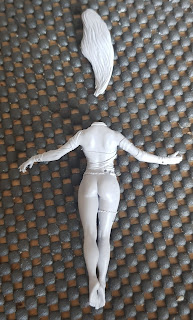 The other details are nicely done too. The cloth that wraps the torso is fluid with no angular edges and the folds and creases are realistic. The chains are sculpted in detail and look as delicate as they need to be as they will be gold or shining silver, so the torso looks like a nice piece.

As I was inspecting the cast it dawned on me that the flowing material which is full of movement does not echo in the hair...

The hair of The Goddess runs almost straight down with just a hint of a turn which I find does not translate correctly with the movement of this figure.

I would have liked to see much more movement in the hair to add that little bit more ethereal-ism to the piece. Ya know; long flowing locks drifting away from the shoulders. Not wildly, just enough to echo the flow of the bellowing materials below, to the music of Garth’s Dream Girl scene from Wayne’s World. One other point on the hair is the detail is quite flat or shallow for want of a better description. I would have liked to see much more flow and detail for sure.

The folds in the cloth are nicely done and you can tell they have been sculpted realistically but the hair seems to have been forgotten a little and has fallen by the wayside but I don’t feel this takes anything away from the piece at its base design and is just my personal opinion.

At the bottom of each run of material is an attendee of The Goddess...

Initially I thought it was just 4 of the same miniature which by the way are 32mm miniatures like the rest of the range. However on closer inspection each miniature is a totally different sculpt.

Going back to the assembly for a second, on the bottom of each miniature are dots. Each set of dots has a corresponding set of dots on the base so you know where to set the miniatures correctly.

This put my mind at ease a little as it now becomes a starting block to help piece together the whole kit and it actually doesn't take long to work out where each part goes. In fact, each section has a key and lock for ease of location and fixing in place, so my initial thoughts of a tricky assembley were appeased.

Each attendee is sculpted in a kneeling pose shrouded in heavy hooded robes. The attendees are anchoring the Goddess to the floor as it looks like she will float away if they were to let go. The whole feel of this caught my attention because of the movement and subject and I thought it was a pretty nice piece for sure.

On breakdown however it doesn't seem that bad. What you have is one 75mm sized miniature, four 32mm sized miniatures, a scenic base, art card, and decent packaging. Take in mind production cost of sculpting, printing, moulding, and finally casting and I really think it isn't badly priced at all.

I know some will not spend that much on potentially gaming miniatures but I know a lot will as they explore the world of Mortals Reckoning.
Most of the range are quite nicely priced in fact, ranging from £12 -£70 and are all good quality resin. You may think that’s high but when you see plastic kits for £20-£100+ it really isn't so bad at all.

Now I mentioned the scenic base earlier... 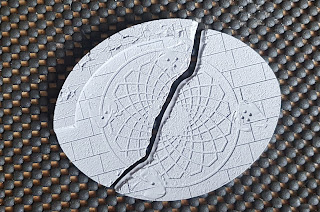 The base its self comes in 2 pieces, it is assembled via a huge crack that runs through the centre of the base which hides the join.

Now with that in mind, once assembled the base actually fits in the box quite easily with room to spare so not quite sure why this is in 2 pieces?
Maybe a moulding issue but I am pretty sure it could have been cast in 1 piece but hey, we all do things differently.

The base is designed with paving surrounding a symmetrical circular pattern like I used to draw with my spyrograph when I was a kid,. You know the cog shaped thing you put a pencil in and moved it around inside a bigger cog to get those almost fractal images, but I digress.

The base goes together quite well actually. It’s not just a butt joint, it actually has a male and female connection system which I think is a nice touch and will make a strong bond once together.

One other thing which was brought to my attention was its similarity to a Warmachine Gaming piece called The Harbinger of Menoth. I have never taken interest in Warmachine so I didn't know this figure existed so I have no idea if Cerberus Studios took inspiration from this what so ever? Benjamin may be able to clarify this as he has been a keen gamer from an early age but any similarity I'm sure is a coincidence but I will let you guys take your own guesses for a bit of fun.

So, how do I summaries this?

On face value I quite like the piece. I had to as I paid the £70 price tag for it.
The overall feel of the piece hits my interest peak of all things gothic and supernatural, as well as genre’s like mythology and fantasy movies. I feel this piece captures a little of each of those things in one release.

As you read, I did find several niggles with the piece but it didn't put me off building it. £70 is a high price and I feel the clean up needed should have been a lot less but when assembled this piece is going to be some size and it will take some planning when painting it.

Do we assemble totally and paint it all together or do we paint individual pieces and then assemble?

Tricky one to decide, but whichever is decided I feel this piece is going to look pretty sweet and maybe even build it a nice marble effect scenic base just to be a bit fancy?
What do you guys think?

Take a look for yourself at Cerberus Studios and have a look at the rest of the range too, you won’t be disappointed.

Let me know what you think either in the comments or over on our Facebook page.

Thanks for reading and see you next week for a new review.
Written by Normski on Monday, August 19, 2019
Email ThisBlogThis!Share to TwitterShare to FacebookShare to Pinterest
Labels: 2019, 75mm, Cerberus Studios, Fantasy, Gaming, Resin, Review