The Old Druid by Carmine Giugliano


Going back now to early 2017; Carmine released the Old Druid. This piece went by under my radar for some time as my first sculpt by Carmine was the Van Helsing bust back in 2016 and I didn’t catch on to his personal projects right up until 2019. 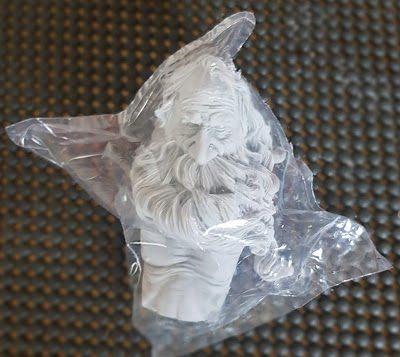 However; the Old druid bust I first saw in the painting competition at Euro Militaire (now Euro Miniature Expo) and again at Scale Model Challenge, but I didn't know it was sculpted by Carmine.

After seeing the progress pictures of his Wukong sculpt I took a retrospective look at his other projects.

You guys have already seen the reviews on Wukong and The Slayer so here is the third instalment of my Carmine bust selection. To be fair this is going to be a very short review as this piece is a one piece bust. But what a bust it is!

This was the first piece I saw were the hair was the frame for a face rather than armour or leather.

I'm really not good at painting hair so this piece is one hell of a challenge for me.

I really love the ageing skin on this bust. The furrowed brow is screaming for botox, his bulbous nose of an old alcoholic fisherman and the wrinkly skin under the eyes spreading out like the tentacles of a box jellyfish. 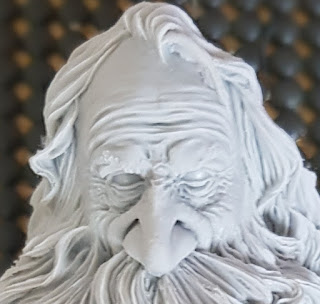 Needless to say that is some very fine sculpting.

The body is just as amazing. Skin that belongs to a fat guy stretched over an old guys torso. Just imagine Iggy Pop with his top off and ya have it perfectly but the Old Druids lust for life seems to have left with his youthful skin. 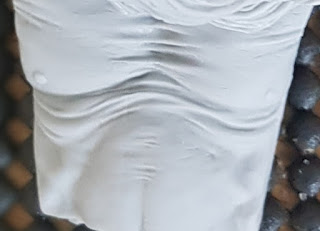 Now the most prominent part of this design is the hair.

Sculpting hair is no easy task and this piece is roughly 50% hair. His hair flows and twists like smoke filled eddies on the trailing edge of a wing. The swirls and curls of this hair will be enhanced nicely by some very high contrast painting with a hope of showcasing the facial features. 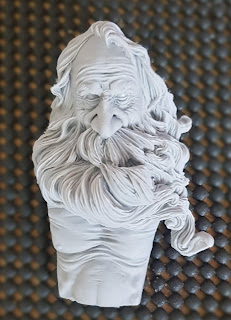 The quality of this is very good. The mould was cut along the sides to avoid mould lines running through detail, but there is a fine line up the stomach where I assume the mould was cut to get this piece out intact.

This may be a one piece cast but the hair will cause the caster quite a headache so I imagine there was some fancy cutting to open the mould.

Resin is nice, it's cast pretty well and the details are crisp and organic and this reinforces why I prefer traditional sculpting over 3D.

On face value there is not a lot to this bust but when you look at it up close its packed with detail and will require a lot of time and patience to paint it well.

All in all I really like this piece and I am glad I actually found out where to buy one.

I hope to review more of his creations in the future as there are more and more sculptures coming out of Thor Creart studios.
Written by Normski on Monday, August 05, 2019
Email ThisBlogThis!Share to TwitterShare to FacebookShare to Pinterest
Labels: 2019, Bust, Old Druid, Resin, Review, Thor Creart