Bold Miniatures are a relevantly new company run by Mario Ferreira Vilanova. He started Bold back in July of 2018.

Mario always had a vision of using the most talented artists in the hobby to produce high quality miniatures and for his first release he produced Joshua. This miniature came from the art work of Elisa Day (also known as Katherine Zhuk) and was 3D sculpted by James W Cain with box art by Sergio Calvo Rubio.

The Kickstarter for Joshua was successful and Joshua saw paint jobs all across the globe with Trent Denison’s version most noticeable after Sergio’s box art.

This next Kickstarter will see the release of the next two pieces from Bold Miniatures. Anna and Valery. 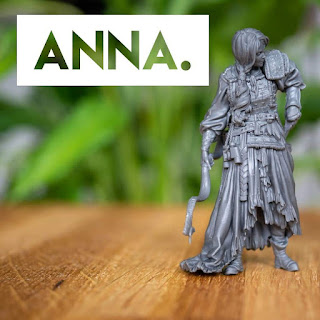 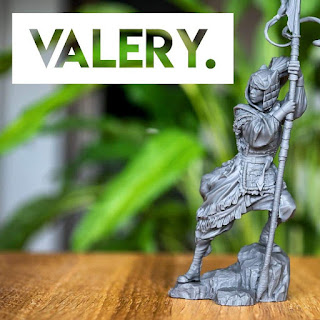 Anna is based on the concept art of Katya Gudkina and again 3D sculpted by James W Cain.

I also need to mention that Mario has taken on all of the casting duties of his own miniatures which we will discuss as the review goes on.

Anna and Valery are a duo so will both feature in the kickstarter so keep your eyes open for the campaign and take a look at what Bold have on offer.

Anna is the boss of this duo and Mario has kindly sent me a copy to review as part of the Kickstarter campaign. 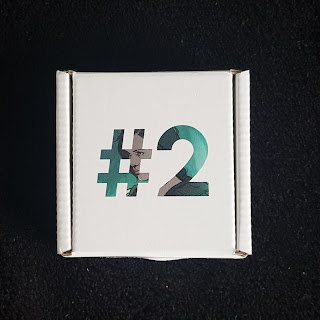 Anna is the first in the range to get the new style boxes and very useful padding. 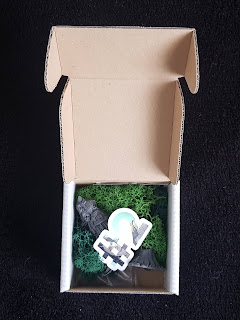 Inside the box we get 2 ziploc bags a torso and a small terrain piece, all sat on some lichen and topped with the new sticker. And who doesn’t love stickers? 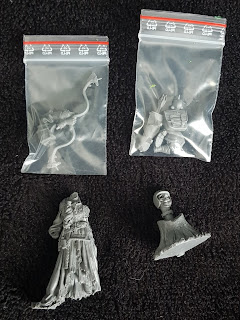 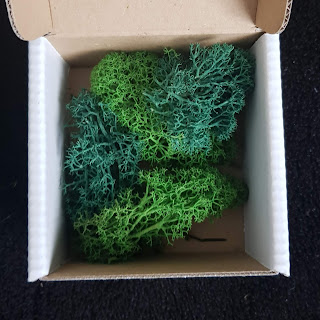 The Lichen has replaced black tissue. It is Mario's vision for the padding to be useful instead of ending up in the bin and I for one think using another very useful product in this way is an outstanding idea so hats off to Bold for this.

What do we get for pledging for Anna on the Kickstarter?
Anna and Valery as single miniatures are around £40.
to pledge for both the pledge is around £73 this includes stretch goals too.

All together we get 10 parts. The miniature has been cut in a way that Mario hopes will all fit together nicely once all the prep is done.

In the box is scenic piece, this is one of the stretch goals of the campaign and does not come as standard in the kit. 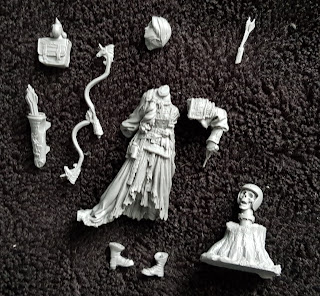 The head attaches to the torso by the neck and the long hair has been sculpted as part of the torso and joins the head at the hair band with a clean butt joint.

The left arm has a key and socket joint and once in place there is a very small area of filling to complete and most of the joint is hidden by the design of the cut.. 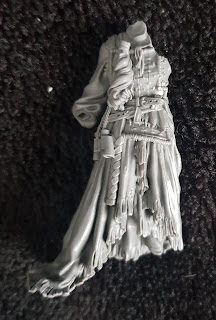 The peripheral pieces all have similar joints and location points; all of which are done in a way to hide the way they are attached. This I find is one of the positive aspects of 3D sculpting.

The design of the miniature had some changes as Mario was not happy with the fit of the pieces so had it re-cut in the way we see it now. I feel the changes have worked well giving multiple fixing points to the parts making the joints much stronger.

The theme of the piece follows on from Joshua with a dystopian/ post apocalyptic setting with a fantasy twist.

In fact the dress looks very much like that of the 17th century old west. Women of the time would get dresses imported from Europe and in time started to replicate that style into their own fashions. 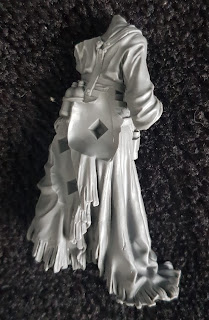 The dress is then adorned with a sectioned patched leather tunic (as you can see above) with modern equipment such as binoculars, and what look like coca cola bottles on the belt.

The bow and arrow hint at a technology starved environment but the fluffy unicorn toy peeping over the US postal service satchel brings us right back to a modern setting.

The details of the miniature are all sculpted quite nicely; sharp and clean no dull spots and very organic.

James has done another outstanding job with the sculpting.

The face of Anna is really nice. There is clear emotion in the features. You can tell just by looking at her face that she is thinking about what she is doing like she has that far away stare while reaching for an arrow for the task ahead. 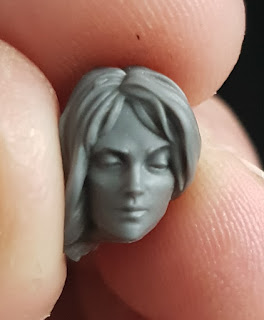 There are way too many sterile faces on miniatures these days and it seems to be a forgotten feature of sculptors these days. But James has done well to portray emotion too add to the theme of this piece.

Now as I said above Mario has taken on the casting duties and does all the work himself.

Mario is very new to the moulding and casting of miniatures and knowing myself how difficult this process is I can say Mario has done an amazing job with it.

That being said there are several issues present with the cast I received. On the terrain piece is a skull with a motorcycle helmet on this is sat on a pipe section.On the back of the helmet is a mould line. It isn’t a huge mould line and I had to turn the piece to the light so it cast a shadow so you can see it.
This comes from lack of experience with mould curing but will improve in time as Mario gains more experience and not being a main part of the miniature the cleanup of the mould line will not affect the quality of the miniature. 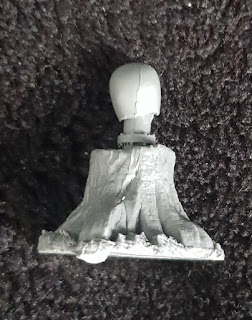 All the smaller piece have been cast very well. Small pieces often have mould lines and suffer negative critique, but in reality delicate pieces will require the customer to undertake the clean up as this is often unavoidable.

Mario has however managed to minimise any cleanup, there are still points of flash and very fine lines but to get these parts perfect is a huge undertaking. 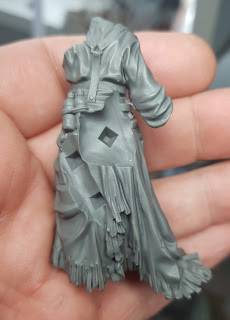 On the main torso you can see the mould has been placed along the cut of the arm join and down the fold of the dress. This was done to hide the cut and in a way that allows the customer to prep the miniature with as little effort as possible.

This is done at great cost in effort and time to the caster as it is not easy to cut a mould to hide a mould line and is often harder for the caster to remove a cast when cut in this way, but Mario has managed to do this rather well and the cleanup is indeed minimal on this piece.

If I was to summarise the miniature I would say this is a nicely produced piece. Yes there are mould lines but none of them hinder or deform any detail at all. Everyone involved from concept to production have done very well and we can see that Mario has upheld his vision of high quality pieces.
The pose of Anna is in action, not static, so will allow the customer to tell a story with this figure very easily.

I like this release and I think Mario has done stellar work for his first time casting. I am sure as he continues his range his casting skills will become much better.

Part two of the review will complete the Kickstarter special with a look at Valery; the sidekick of Anna, and give you an insight into the dynamic duo from Bold Miniatures.

Take a look at Bold Miniatures or head over to Facebook and check out all their products.