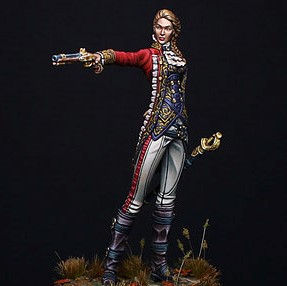 Mr Lee's Minis is one of those companies which seems to have something for anyone who's looking for figures or busts to add to their collection. Many are from established brands or sculptors but they also carry many items exclusive to them through their own line. 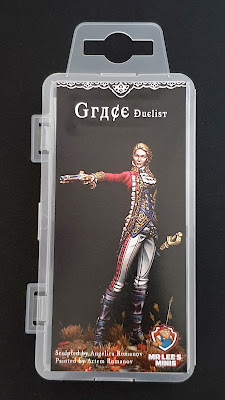 Packaged in the standard hard plastic clam style box with full colour box art on a front sticker which also names the sculptor and painter (which I always like to know). The figure arrived in the post safely.

Coming from the sculpting hands of Angelica Romanov who is starting to get her name around and has a very clean design style.

The box art interestingly comes from her husband, Artem, who has painted a great box art. But for this article I'm looking at Angelica's creation.

Overall the style of the figure feels very 16th to 18th century. Almost like she could step out of a Pirates of The Caribbean type film but at the same time not copying anything I've already seen.

As a figure it's a fairly simple three part cast with only the right arm and sword being separate. 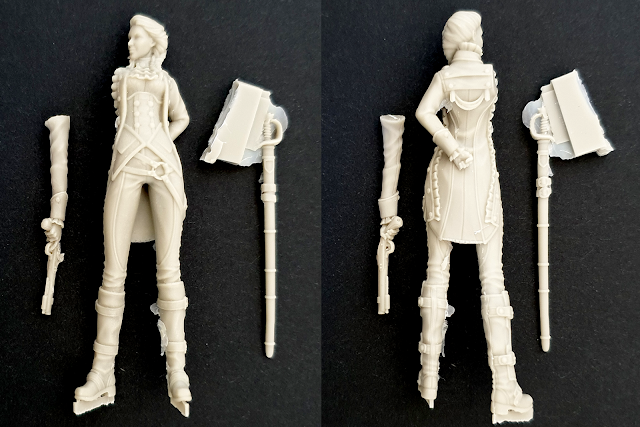 One thing that stands out from looking at the box art is the embroidery in the box art is painted on rather than sculpted. That for me is a good thing as it gives the painter the choice plus I personally often find that sculpted material details, especially on computer sculpts, to be deep and really plastic looking.

No tricky assembly to be done with Grace though I feel Angelica missed a trick by not creating a couple of keys and sockets to make sure the arm and sword are exactly in the right positions. Maybe I've just come to expect that with some of the other computer assisted design (CAD) stuff.

You can see quite a bit of flash which did clean off easily so no worries there. 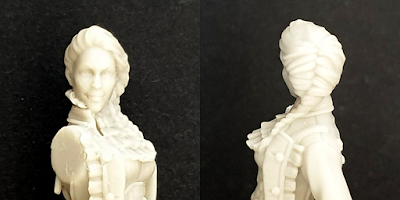 As usual I like to start at the head when looking over miniatures as they are often a major focal point.

Detail and design is good, especially with the ears and hair. Would've been nice to have the symmetry in the face reduced but at the same time the look does really give the feel of an absolute bastard of an officer who won't stand for any rubbish at all. Very fitting for the overall confident pose.

I have sadly noticed that either the cut on the mould runs up into the face or this copy has a slight defect. Fixable if careful with some putty and sculpting tools but it has been pointed out to Mr Lee's Minis and stock is being checked which is encouraging to hear (and also why many are confident to buy from them too). 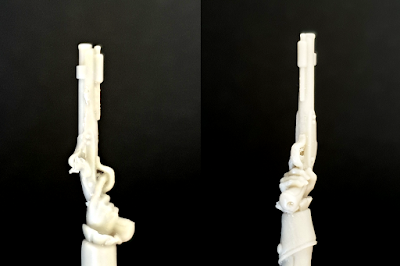 Her pistol is a great design, especially with the screw placement and hammer detail. Little bit of mould line along the side but easy to remove and an easy to fill bubble. 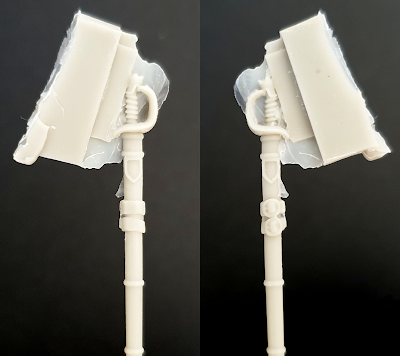 Now every officer needs a sword. Grace's is nicely designed and has some lovely detail on the front of the guard.

The piece of excess resin was easy to remove but take your time to clip a bit away from the sword to remove most and then clean closer.

I was wondering why the decision to cast that way around and I suppose it does have the advantage of making sure that part of the detail reaches the customer in one piece even with the required cleaning. The details on it are well defined so cannot complain at all. 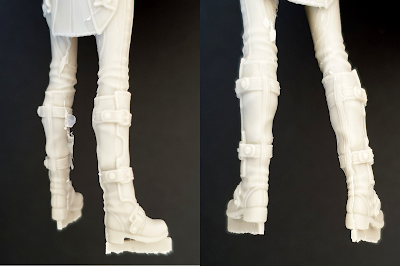 Down at the leg you get to see quite a bit of work put into the boots with the buckles and layers of leather well distinguished.

You also see how the mould has been cut too. Most removes really easy and which ever resin the caster uses is good to work with. Flash and lines can be easily trimmed, scrapped with a scalpel, and sanded to remove. Though the one at the back of the right boot was a little out of line so needed a little more sanding. 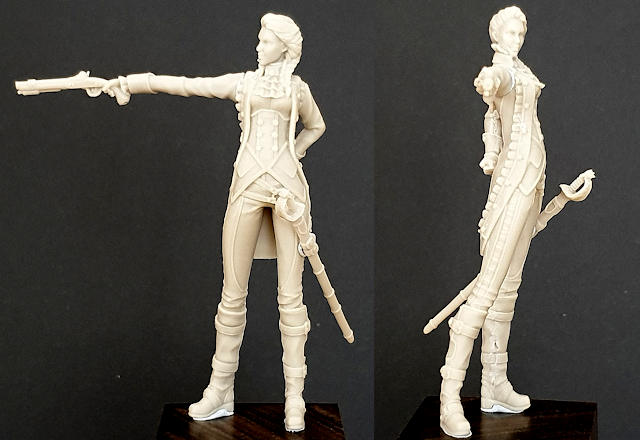 There's a few things that really shine for me with this figure:


There's more than enough sculpted details along with smoother flat areas to give a painter something they can create with to create material textures of freehand patterns.

The casting, while a couple of slips on this copy are present, is crisp and really shows off Angelica's sculpting. Plus the resin is solid. Firm but not brittle. You can see a small patch on the back of her coat and left leg (below) where I forgot to give it a little wash after sanding. But it cleans up nicely. 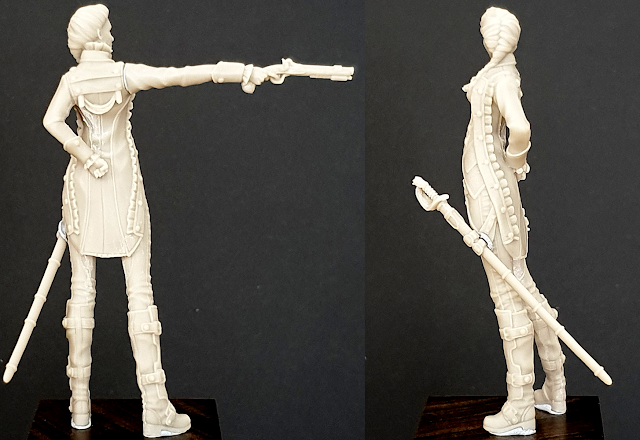 While being a tiny bit confused on her setting, I can actually see many ways a figure of this design could find herself utilised. Yes she has a historical hint but I feel she will more fit with steampunk and fantasy settings. Even dystopian or sci-fi settings too (Gundam anyone?).

The whole feel and attitude of Grace as a strong female figure really works well and I hope to see more from Angelica in future too.

At £35 she doesn't break the bank and is very reasonably priced and can be found here on the Mr Lee's Mini site.