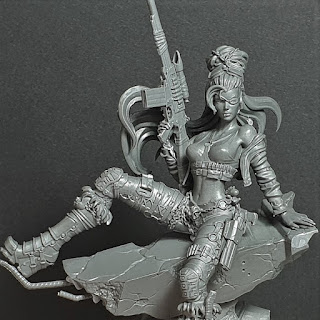 This tag line in itself explains so much about the whole look, style and name of Cherry Viewfinder. A wasteland sniper with a mean looking attitude. 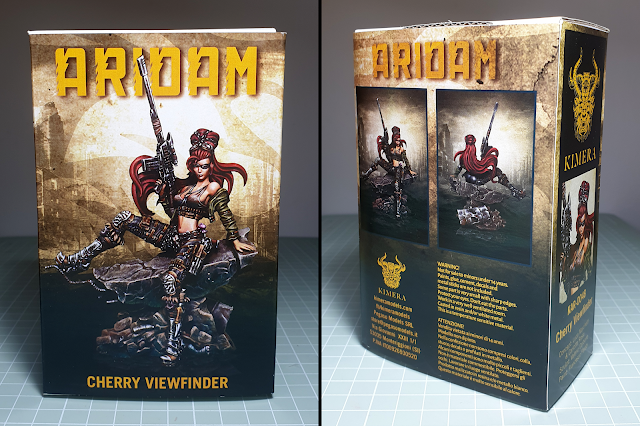 Cherry Viewfinder. A name like that just makes me think of Tarantino films like Kill Bill. An infamous killer of a woman with a look all of her own. Put her in a Mad Max like setting with scavenged trophies and plenty of leather and that's pretty much the setting my mind places her in.

You can really see that Valero Carbone has done a great job in translating Carlotta Rossi's quite complex concept art into a 75mm 3D miniature. 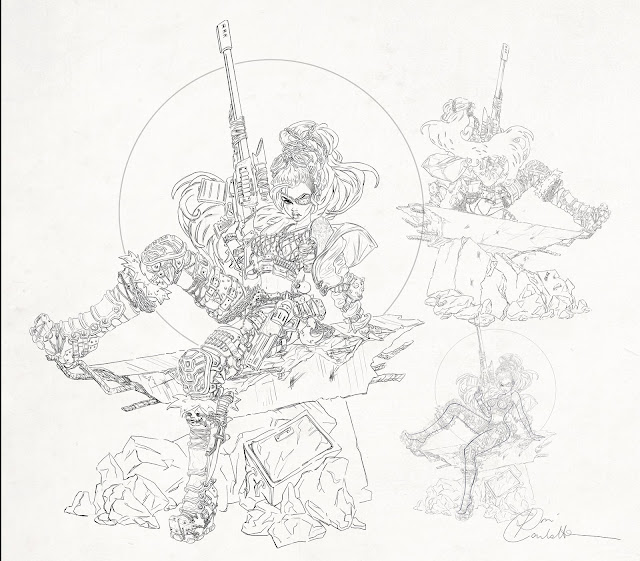 There has obviously been a few changes to some of the details here and there but I think sticking 100% to the highly detailed concept would've resulted in a busy and overly complex miniature which could be tricky to cast and paint. 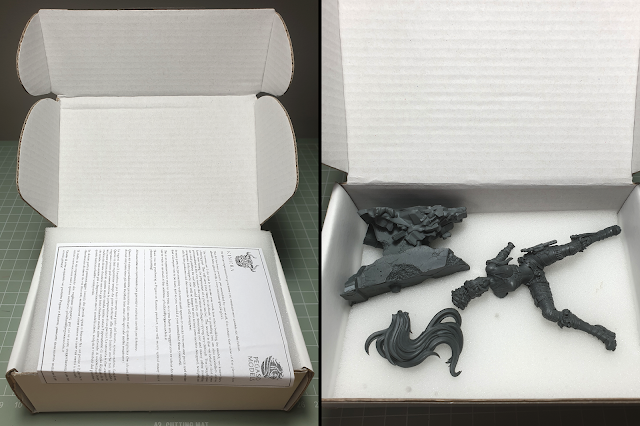 I have to admit, I was for some reason expecting one of those large black Kimera Models branded boxes when I knew this was coming my way, which as you can see obviously isn't the case. However; this box fits everything perfectly while cutting down on size and materials used.

The sleeve tells me all the information I need like the artists involved, scale, company details, and also a few warnings ("Don't eat the parts" being my favourite). And of course is in full and glorious colour showing Francesco Farabi's box art.

All main parts are sandwiched between two firm bits of foam so nothing is going to move around. The smaller parts were contained in a clear bag under the lower piece of foam. No complaints here. There is also a sheet of information to explain about a partial pre-assembly experiment Kimera (and Pegaso) have been doing, but I'll talk more on this later.

As you can tell, for a 75mm there isn't many parts. Well that's due to the partial pre-assembly.

The base (from what I can tell) would be in two parts. Top concrete block and the main base. Whatever adhesive they are using, it's tough. I couldn't pull those parts apart with my hands and a good grip. So that's a good thing. The reinforcing bar parts are sensibly kept separate.

Her right leg, pistol, and knife are also pre-assembled too. Great news if you don't like prep work. Not quite so good if you're like me and enjoy the hunt for mould lines and cleaning up. But I'll keep an open mind because of the reason behind the decision (discussed later... sorry).

I'm glad to see that the large amount of hair, rifle arm, and left hand are still separate. I think putting those in place would either run the risk of damage or seriously reduce brush accessibility. So a good move there. 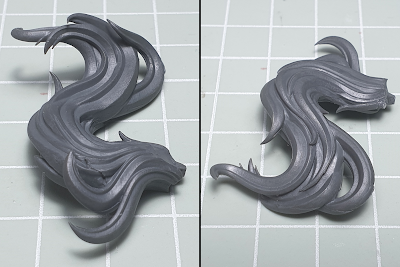 The bulk of her hair is quite stylised and bordering on being comic like rather than having lots of sculpted strands of hair. As someone looking for detail, this is a little disappointing.

But on the other hand, I struggle to paint really detailed hair and am often told to picture it as ribbons and paint the volumes. This here is pretty ideal to paint in that way and the feeling of strands is easy enough to add with some brush strokes later on.

There is a slight mould slip but is luckily on the underside and accessible to clean.

Cherry's rifle...
That gun barrel and scope must be a pain to cast and remove from the mould. But it's cool. I always drill gun barrels so this really saves you even thinking about doing it.

Sadly, the inside of her wrist isn't moulded so well. Now before you think "that's not good enough" blah blah, casters are human after all. These things happen when miniatures are cast in large batches and the caster is moulding and checking hundreds of parts.  All it has taken though is a photo and email and there is a replacement part on it's way.  So if you ever have a problem with a kit from any company; always contact them directly. Don't go to social media and start to publicly complain. You may even highlight a deeper issue they were not aware of too.

Anyway... back to the arm. This fits perfectly onto it's place on the main body (the hair does too by the way). 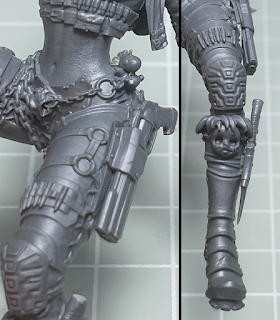 Little details and characterful touches from the concept art are definitely found all over the place on this lady.

Creepy, eyeless doll faces on the shins.
Chains and large round links connecting them together.
High heeled boots with solid heels. No stilettos.
Fur.
Bullets.
Protective, builder or military type knee pads.
And a small plush pony or unicorn because... well, you can ask her.

All of this just adds to her story and the overall setting.

Not the most comfortable seat to choose, but again this adds a bit more flavour to the setting.

The bars fit simply into holes which are already in the top block. Just one of them needs to be in a specific place for her right foot to rest on so you can play about with the placement.

What I did notice though it there is some surface texture on the top block which I asked about. Some marks look intentional to give it a worn and damaged look, but there are some faint print lines that have made it to the casting. I'm expecting these are likely to go once primer is applied but does highlight one of the drawbacks still sometimes present with 3D printing. 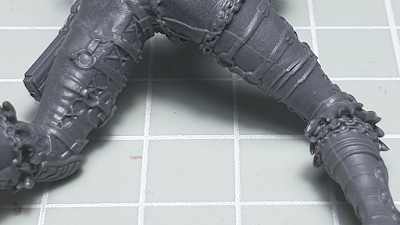 There is a bit of mould line removal to be done but luckily on the underside of her legs which aren't massively visible when all assembled.

I was a touch worried when I first saw the dark grey resin as previous experience has been that dark resin has been more brittle and not too good for cutting and sanding. This wasn't the case and the little cleaning I did was straight forward as with most resin miniatures. 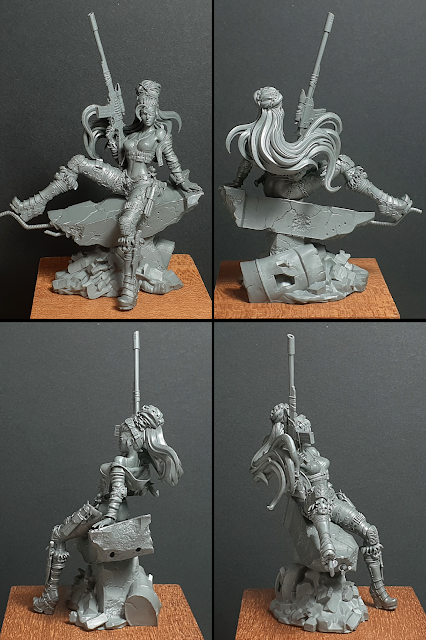 Overall; a characterful figure if a little edging towards the 80's movie pin up image. I hope to see more versions of this figure getting painted and maybe even taking a primary spot in dioramas, overlooking those below her. At €54 she's in the lower Kimera Models price bracket which is good.

As for the partial pre-assembly; I'm not totally sold on it from a modelling perspective. I like to clean as best as I can and decide on my own sub-assemblies and some areas should perhaps be left for the buyer to clean to their expected standard.

However; this is being done as an attempted measure to discourage recasting which is damaging the hobby and it's often seen than companies close and sculptors give up because they cannot live by working in the miniature world when wages cannot be properly paid. So for that reason I hope this method works and I wish them luck with it. Although those cleaning and assembling need to keep an eye on mould lines which will be tricky to get too once glued in place.

You can purchase Cherry Viewfinder from Pegaso World and see more of the range too. Don't forget to follow the Kimera Models Facebook page for future releases and information.
Written by Steve Haydon (Forté) on Monday, October 07, 2019
Email ThisBlogThis!Share to TwitterShare to FacebookShare to Pinterest
Labels: 2019, 75mm, Aridam, Kimera Models