A Moment of Serenity from Massive Miniatures 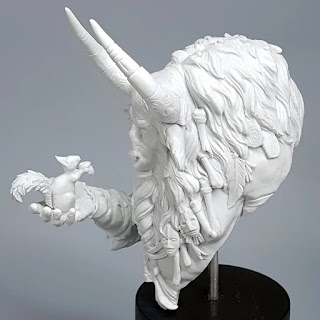 Massive Miniatures is the baby of Luke Wilson who I've known for a few years now thanks to the now gone, Figure Painter Magazine.

I was lucky to get an early look at this bust along with my wife, who decided straight away that she wanted to treat me to it. Especially as we have often spent time out feeding squirrels and she could tell I liked the look of the unfinished sculpt by Peder Bartholdy.

Now, I could just say everything is amazing with 'A Moment of Serenity'. But frankly Luke would have a go at me if I didn't treat this with the same honesty as everything else I review. And so... 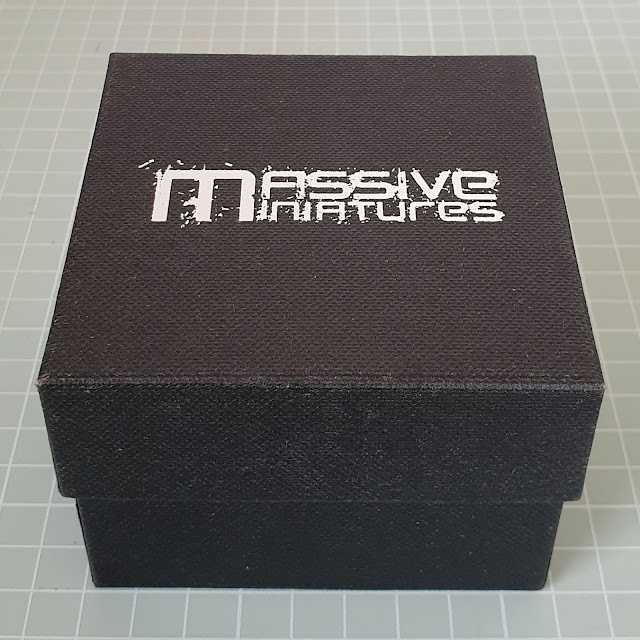 A simple but stylish black affair with the Massive Miniatures logo on the top in silver and a sticker on the bottom with the name of the miniature and barcode.

The box is sturdy enough to protect your miniature so isn't just for looks. 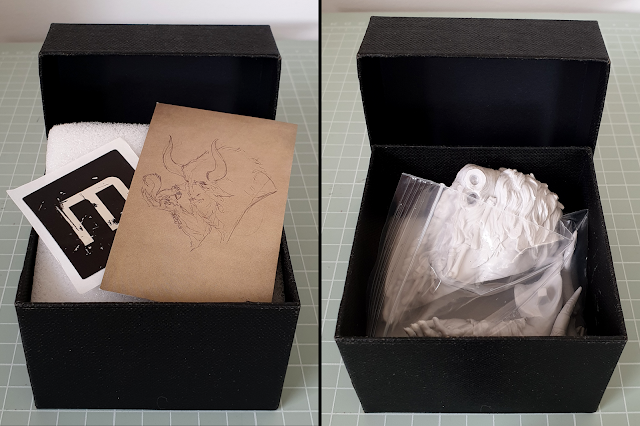 The box felt like maybe the contents may be quite a size as the lid wasn't all the way on. But obviously I had to dive in as I was looking forward to it and may have asked a few times when Kaygar (the Minotaur's name in the short story for it) was being released.

The first things I found was a double sided card with the concept sketch on one side and the story written by Luke on the reverse, and a sticker with the companies M logo which is always welcome. Unfortunately there is nothing to mention the concept artist, sculptor, or caster in or on the package (though they are all credited on the web store).

Sandwiched between two layers of thick white foam was all the parts. As you can see there is a zip lock bag with all the smaller parts and a huge, solid lump of resin forming the main section. 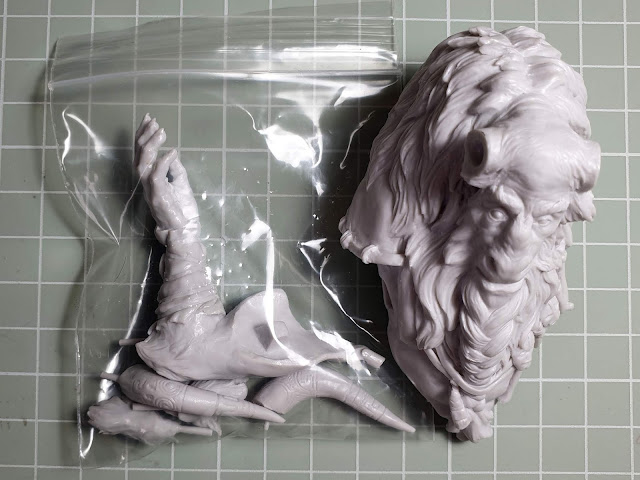 As you can already tell, there are a fair few pieces to this bust.

I'm unsure on the actual scale this is meant to be as it's 80mm in height which I'm guessing may put this around 1/12th scale when compared to a human sized sculpt. What I will say though is this is larger than I was expecting for the £35 price tag. So that was a nice surprise.

That fur and facial expression is typical of Peder's traditional sculpting style. Subtle and delicate details but plenty of character. There are lots of interesting little trinkets attached to its hair giving it quite an old tribal feel. Definition is good here and you can see the deep and clear sockets for the horns, ears, and right arm.

There is just one small plug at the bottom; behind the end of the platted beard. And as for finding where the mould joins... that was tricky. It seems as if the mould line runs along the edge of where the bust is cut off which reduces the chance of detail being affected to pretty much almost zero. Kris at BrokenToad has, as usual, done a great job on keeping the sculptors work intact.

Something to note too is the more bison look to the face rather than the classic bull like minotaur. No protruding head here. More a flatter, wider face; and a peaceful overall feel rather than being a rage filled beast. 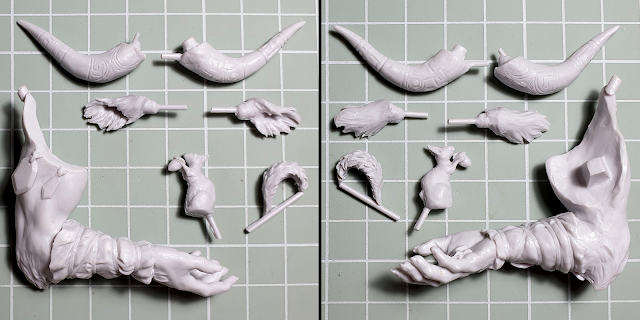 The bag contains the other seven parts.

As you can see just from those two images; every part has something to be removed. But, every one is in a location which is easy to access with a pair of clippers. What I found, and have done with the last few kits I've had which have been cast by BrokenToad, is their resin has a subtle rubbery feel to it. But don't be put off. I'm not talking PVC or Forge World levels as it cuts and slices excellently, and reacts to being sanded well too. 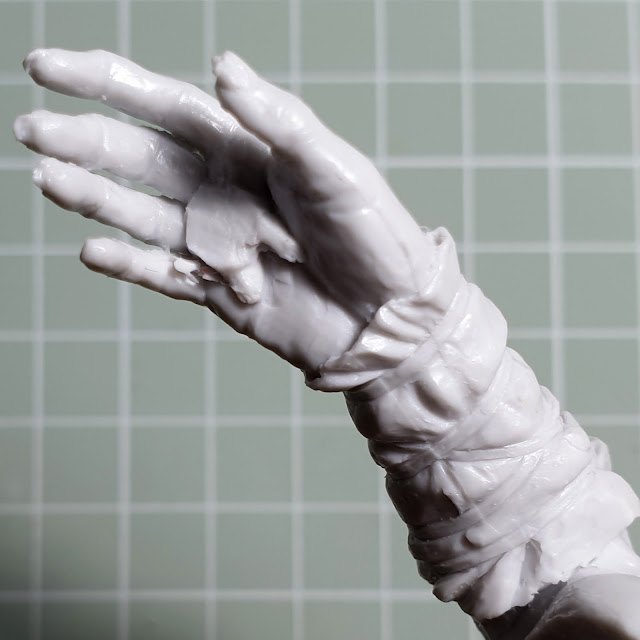 I feel I need to point out the worst mould line and flaw I could find. And this is it. A slight line along the inner forearm and some strange excess next to the squirrels feet/ joining area which just sliced off easily with the scalpel.

Oh... and a second line along the thumb. I'm almost frustrated that I have no more to point out where the casting comes in as I always aim to show you what you have in store when you pick up anything we review. But this is pretty spot on and only took about half an hour to clean up and much of that was taken up with turning and tilting under the lamp. 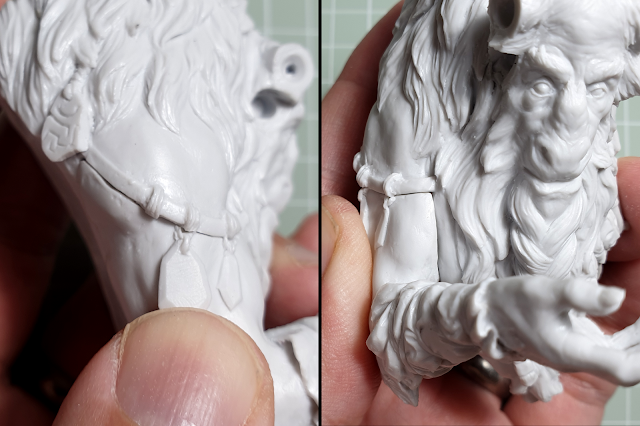 There is a little work to do on the arm join. Nothing major at all though. A little Milliput or your chosen filler and all will be good.

Now for the really sweet bit.

Peder has been getting a name for himself making detailed animals and you can see why with the delicate fur detail, the ears, and that fluffy tail.

But it's the pose of offering the nut up to the huge and powerful beast that really sets of this whole design and story. With the squirrel sat in an open and relaxed hand it shows a gentle side to this minotaur. A mythical creature usually portrayed as always aggressive towards some adventuring hero. Maybe this one looks after nature.

My only issue with the way this bust is cut is perhaps the way the squirrel body connects to the legs as it isn't a completely defined join. A key of some kind could help. Especially when everything else goes into place so easily and efficiently. Just check the ears in the assembled video and photos below for example.

What I have noticed is that in my rush to put this together and photograph.. I really didn't do a great job in drilling a straight hole for the rod. Rookie mistake. And with a bust like this it really makes a difference as you want that squirrel to be upright. So it looks like I'll be filling that one in and drilling again. Oops.

If you're still wondering if I like this or would recommend this miniature, well, it's an obvious yes. And not just based on the fact that it has a squirrel. As a piece it has a great composition and tells a small part of a story. It also has different textures for a painter to play with. Fur and skin are obvious but you also have bones, wood masks, and large horns with tribal carvings to play about with. Just be careful with positioning the squirrel on the hand and don't make the mistake I did when drilling the hole for a rod. 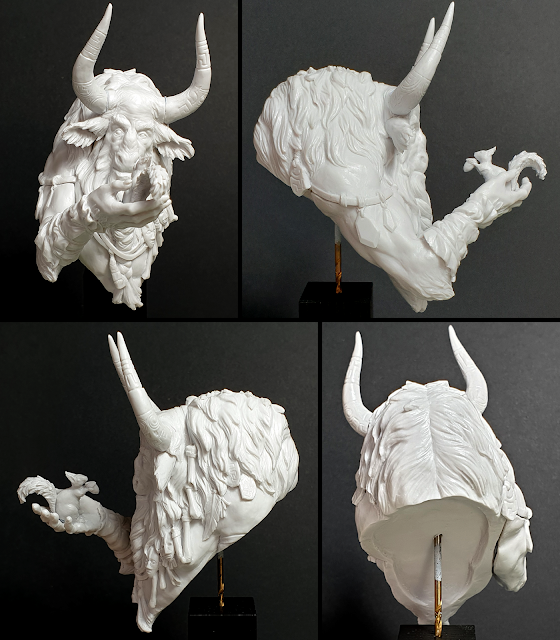 In a hobby full of war and battle, 'A Moment of Serenity' is a great addition to the growing catalogue of calm and almost tranquil miniatures available to painters and I'm looking forward to seeing what people create around this.

You can purchase 'A Moment of Serenity' directly from Massive Miniatures and follow their Facebook page to keep up to date with other releases as and when they happen.

Now I just need to match it to a suitable plinth (and fix the drilled hole of course).

Until next time, than you for checking GreyMountain Reviews and please feel free to leave a comment and/ or subscribe for future articles.
Written by Steve Haydon (Forté) on Monday, November 18, 2019
Email ThisBlogThis!Share to TwitterShare to FacebookShare to Pinterest
Labels: 2019, Bust, Fantasy, Massive Miniatures, Peder Bartholdy