Huia the Goddess of Life from Kaha Miniatures 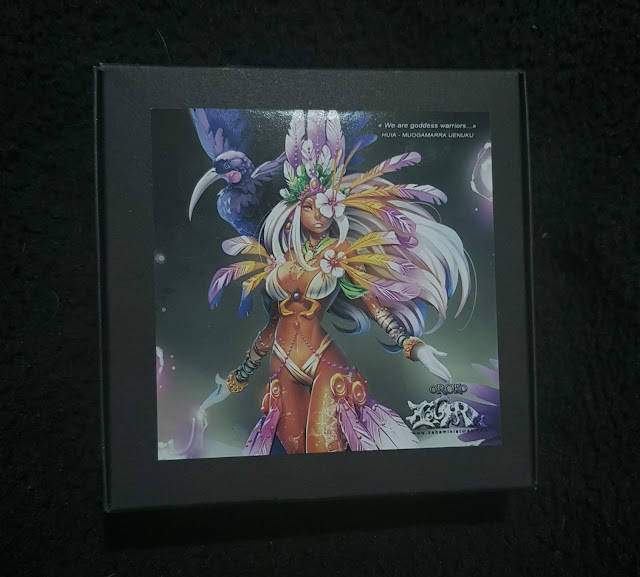 Just as well because this figure is one of those kits that will require time and patience to assemble and paint nicely.

Fancagne Didier the owner of Kaha Miniatures is known more for his small 28mm scale miniatures, animal warriors, and barbarian type characters as well as some oriental and Māori style pieces.

These miniatures have been around and appreciated by hobbyists for some time now and are very nice indeed.

Huia the Goddess of Life is a totally new direction for Kaha Miniatures as it is the very first 75mm sized miniature for Fancagne’s range. 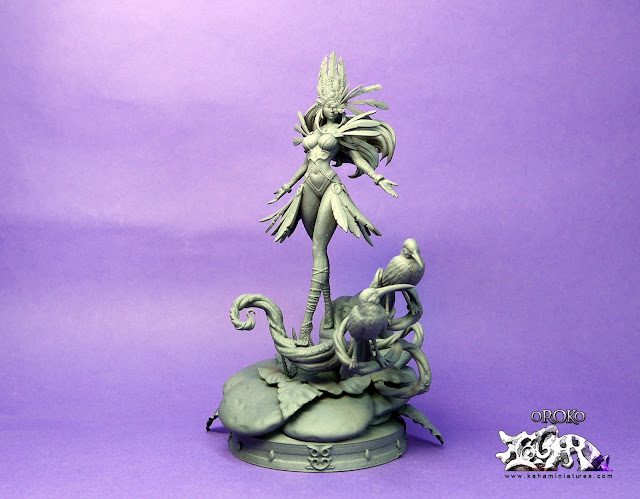 I don’t know how many of you have met Fancagne but he also has a dance troupe called Sakura Party and part of this troupe is his very lovely other half Teecia. She has a costume very similar to this miniature and it looks like Teecia too in caricature form so this piece is very relevant to Kaha Miniatures indeed.

Lia Henson is the person behind the elaborate concept art you can see on the box and was used to create the scene for this sculpt.

Inside the box is where the jigsaw begins... 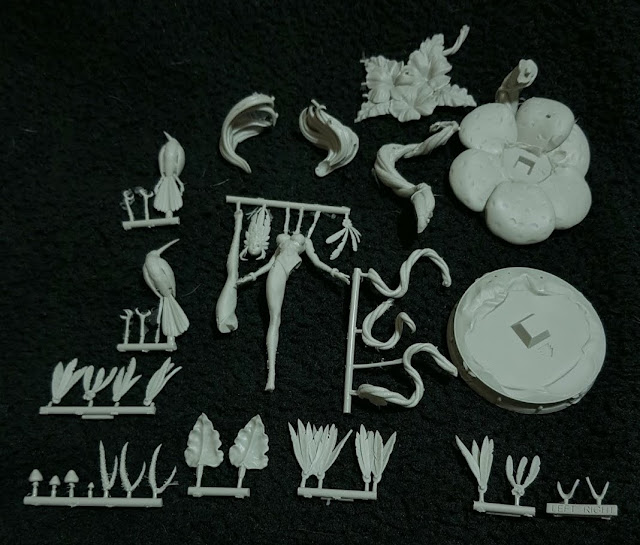 36 parts make up this very cool and intricate sculpture by Warren Chandra Gunaean. I spent quite some time perusing these, looking at all the edges of the very small bits looking for mould lines but I am very happy to say I only found one. And that was on the leaf of the biggest fungus petal of the base. The only other issues I found and left in place was some flash so you could see I hadn't cleaned it before reviewing.

Flash happens as there is a fine gap in the mould as the resin seeps into the gap when it is poured and put under pressure. 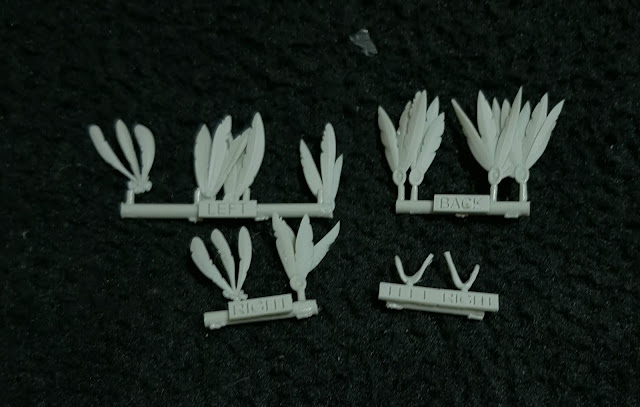 When I initially saw the amount of parts I instantly thought I need an assembly guide. But on closer inspection I noticed some of the sprues have location words in them. So with this guiding the location of the feathers the rest was easy to work out so my initial concern was appeased. 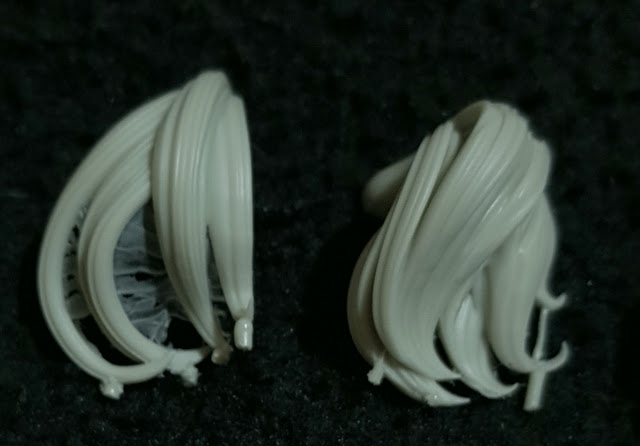 Small pieces are often affected by flash due to the nature of casting so I am not unhappy to see the flash but the caster (Aurélien Diot) could have cleaned them before packaging just for presentation purposes as this piece is at premium price of €90 direct from Kaha Miniatures.

This miniature is very eye catching and I hope to see many colourful versions painted in future. The construction of this miniature will indeed take some steady hands and possibly stepped assembly as you will have a hell of a job painting it if you assemble it completely.

The design of this piece is influenced by Sakura costumes and the Ngāti Huia tribe. A Māori tribe who suffered through the extinction of the Huia birds in New Zealand. 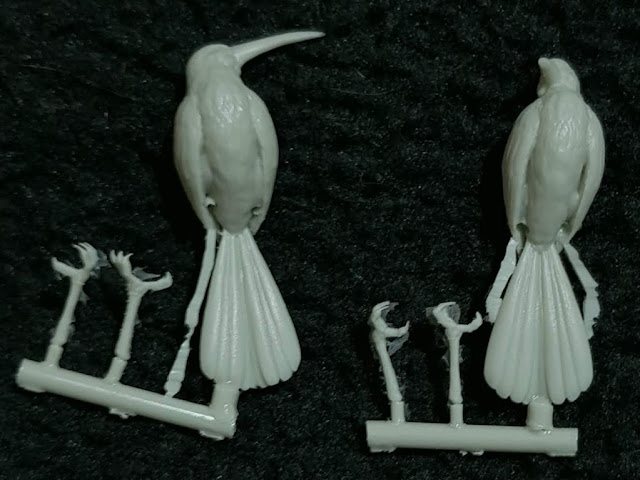 The piece gets it's name from the birds in the sculpture. The long beaked bird is the female or the pair and I assume the figure represents a shamaness of the Ngāti Tribe or simply a tribe member dressed in Huia feathers, but I guess you would have to talk to Fancagne to give you the story behind the concept.

Aside from the flash, this miniature has been cast very well in grey resin. 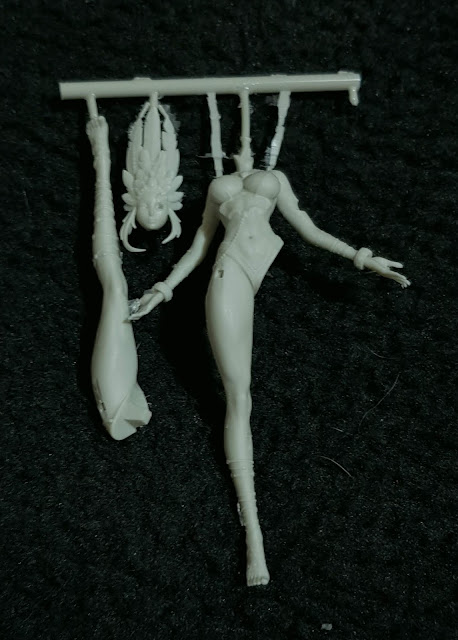 The torso also had some slight flash but managed to escape any mould lines and is designed as a tall,  lithe figure of a very shapely, beautiful animated female with a feathered plume. And once the hair is fitted it has long flowing locks. 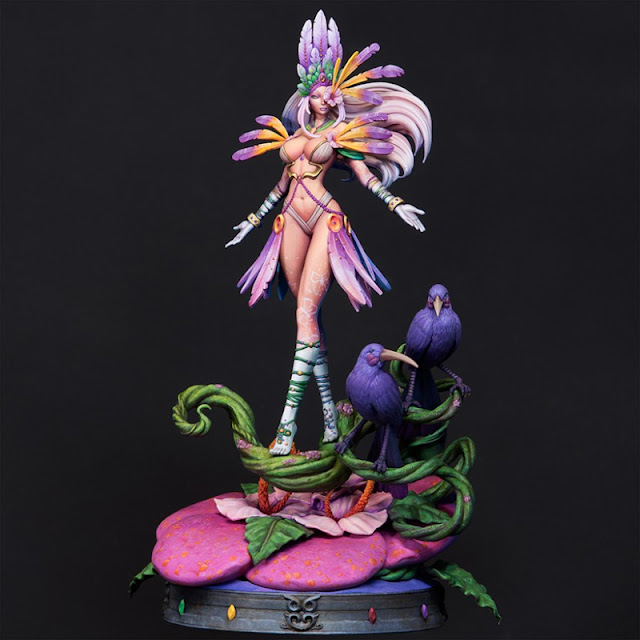 The miniature is stood centre of the flowing roots over the blooming flower bed which is again centre of some fungus-like petals. Stood proudly like a tall feathered stamen shooting out from its floral haven showing her off like the glorious vision she is. To her left are the aforementioned Huia birds that give her the name perched on the twisting roots that curl upward from the base of the sculpture. The paint job by David Colwell has been done in very colourful tones but the Huia bird was mostly black with orange facial spots, so the artwork may not be true to nature but it showcases the miniature very well.

I saw this piece at Scale Model Challenge 2019 as Fancagne shared a row of tables with us (BrokenToad et al.) and while he was packaging them into boxes I instantly wanted one.

I will enjoy painting this piece as it has a cultural and personal aspect to it and I love miniatures and busts that tell a story as this one does.

To my Knowledge there is no other piece like this on the market currently so this is highly unique and therefore well worth collecting as part of my stash of future projects.

Kaha Miniatures can be found at www.kahaminiatures.com if you wish to purchase a copy of Huia the Goddess of Life and I look forward to seeing the painted versions soon.

Take a look at David Colwell’s Facebook page or head over to Kaha Miniatures on Facebook and check out this lovely unique piece.
Written by Normski on Monday, November 25, 2019
Email ThisBlogThis!Share to TwitterShare to FacebookShare to Pinterest
Labels: 2019, 75mm, Kaha Miniatures