Pegaso Models have had a number of top quality releases throughout 2019 and now I get to take a look over one of the November line up in the form of the 75mm, Roman Legatus. 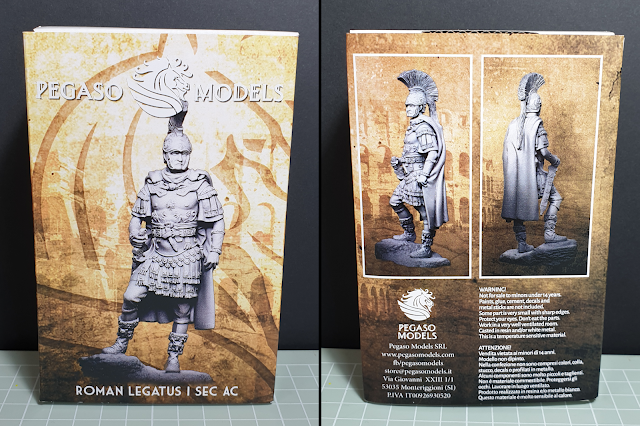 This year has seen a change in the packaging for both Pegaso Models and Kimera Models (their sister company). Moving from the blue or black coloured boxes with stickers on. Now you have a white thick card box with a sleeve showing the miniature and it's title on the front.

On the reverse as you can see above you have a couple more angles of the miniature, company details, and some safety advice. And yes... 'Don't eat the parts.' still tickles me, childish I know. Sorry.

The info I love to see is on the left side. The concept artist who is Luca Marchetti, and the sculptor who is Richard Galicek. Details like this may seem basic but for collectors and those who have done the work you are looking at it is an important acknowledgement I feel. 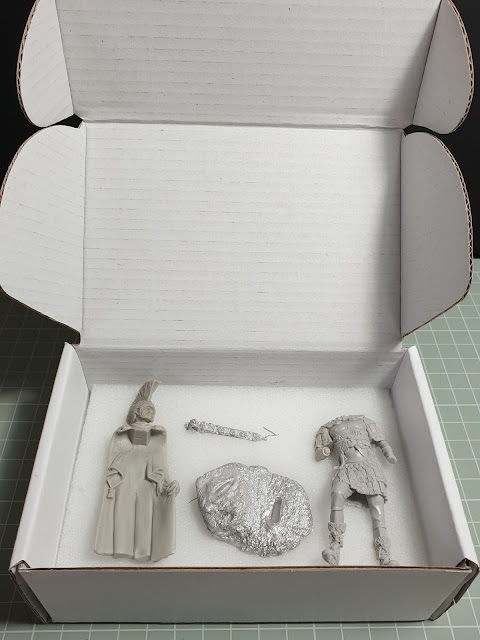 All parts are safely held between two thick foam layers. Just four parts doesn't really seem much. However; the cast is actually done in eight sections and some assembly already done beforehand on the resin sections.

This is something Pegaso and Kimera are now doing and they include a leaflet inside each miniature explaining why. To sum it up though; it is being done to firstly reduce clean up for customers and secondly to try and discourage recasters. I'm just hoping it is doing the second as I do like cleaning up my own projects as I'm pretty fussy.

There's also two small sheets of information included too, written by Marco Colombelli. One in Spanish and the other English. These are some useful details about what the Legatus legionis actually was in history and some useful tips for colour choices. Nothing brand specific which is a plus being that there are so many brands selling acrylics and also those who like to use oil paints too.

As you can see you have both metal and resin parts which I still find strange but I'm sure it is likely a cost based decision. That is only a guess so I may well be wrong.

The overall quick glance over is promising. Shapes look good as do materials and details. Especially that cloak which has a great weight and the folds are excellent which will be great to paint.

The head, crest, and cloak are a good example of the assembled parts and how you still have a bit of work to do. The crest has a line running along the top of it which did carve off but you can also see a mould line running up the back of the neck and helmet. It did have a bit of cleaning but finishing that while assembled was tricky and frustrating with limited accessibility.

There is also a little gap filling to be done too. Though that's pretty normal anyway.

Details wise, I'll honestly say the camera and light hasn't done them justice. To the eye, and not in a larger photo, the detailing on that helmet is lovely and will really take paint greatly. I might have been tempted to reduce the neck length to bring the head a touch closer to the cloak. But I don't have that as an option. 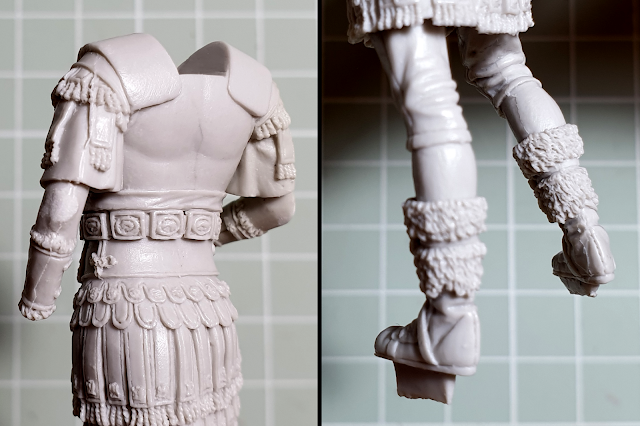 Now again, keep in mind that these photos are likely showing larger than the figure so those mould lines down the arm, spine, and inner leg aren't quite as horrific as they seem. But cleaning them would've been easier with the arms separate. Personal preference again. But they did clean up fine so cannot moan about them and it's more just a case of adapting my prep process. 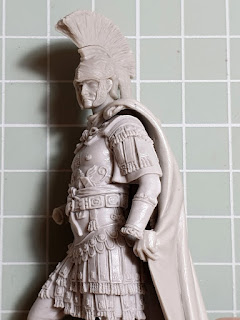 The way that the two main parts attach gets me perhaps more excited than it really should.

Having that hand attached to the cloak rather than the arm and the smooth areas on the shoulder armour are really the key parts to how well they attach.

The cloak also covers the spine mould line, which is good. Although it also covers loads of sculpted details around the back of the figure which I'm sure would've taken Richard Galicek some time.

You can really see the attention to detail that Richard has put into those fringes, armour, and generally the whole figure and I'm sure this will appeal to anyone with an interest in Roman miniatures.

I do feel that the sword would've been better cast in resin as the details are a little softer than across the rest of the figure. But it's a nice and firm metal so you won't end up bending it while cleaning up which I know I've done plenty of times.

Material quality is excellent overall I'd say. Few bubbles in the cloak part to fill but nothing drastic or difficult to do. The resin is firm without being brittle and not showing signs of any mould release which is always a good thing.


I'd comfortably recommend this to anyone looking for a great 75mm sized Roman officer for their collection. The sculpting is excellent and although it is in the common 'one raised foot' pose, this has a slight turn at the hip and knee which implies a movement about to happen to me.

I'm still unsure on the part assembly as I really like to get into all those mould lines and joints to make sure things fit as close as possible and I like to pin parts too. But I can see the benefits too so just have to see how the community take to it. 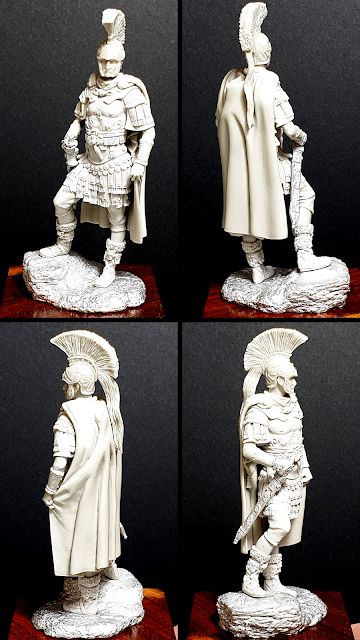 The Roman Legatus is available from Pegaso Models but if you want information on future releases make sure you sign up to their newsletter (at the bottom of their home page) or follow their Facebook page.

As always, thank you for your time and if you have a product you would like us to review please get in touch.