In May 2017 Aradia Miniatures ran a Kickstarter for the characters from Dante’s Divine Comedy. It funded in just 2 hours!

After the Kickstarter had fulfilled Aradia began to release the miniatures through their store and one of the wave 2 kits in the Divine Comedy range is Nessus. 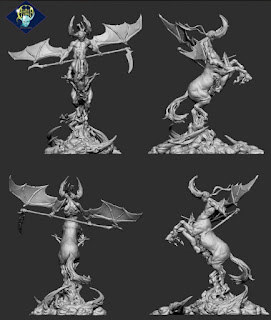 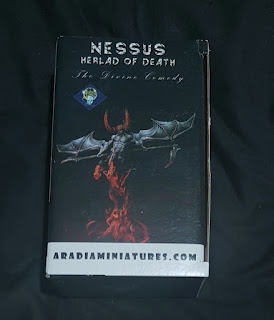 Nessus is a character from the Inferno, the first act of the Divine Comedy. The story of Nessus in short tells us of how he desired Heracles’ wife and Heracles shot him with an arrow before he could force himself on Deianeira.

Before he died, Nessus told Deianeira his blood would make Heracles faithful for eternity so she soaked one of Heracles’ tunics in his blood. But when Heracles wore it, it killed him as Nessus blood was tainted with the poison of the Hydra.

This new release depicts Nessus with a woman nailed to his underside. 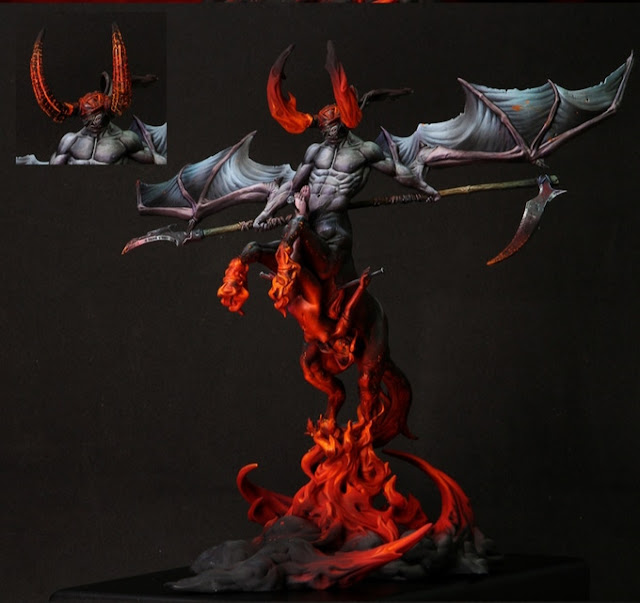 I think this concept by Stefan Moroni is a very nice artistic interpretation of Nessus carrying Deianeira across the river Euenos.

Most images show Deianeira on his back but one from Boris Vallejo has her in his arms almost naked, which is the closest image to Stefan’s concept. 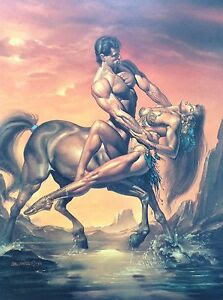 The fire Nessus is stood in I feel is a metaphor for the poison that flows in his blood from the Hydra that killed Heracles with heat or fire.

The classic imagery shows no scythe or crucified woman but the title of the concept is matched by the scythe and torso, so I think this interpretation is an amazing piece of artwork which has been very well sculpted by Dmitry Gravilik, and he has put a lot of detail into it. The fur on the horse torso and the anatomical details of the female figure.

Let’s just say the details of the body are errrrmmmm almost real...

Other details like the horns on his head and bat like wings are also additions not seen by myself in my bit of research so I imagine this is also artistic licence, but Aradia may want to clarify this later?

The miniature of Nessus is cast in grey resin and has a huge 27 parts. If you like Lego this is a kit you will enjoy because it is going to be a task to build. But who doesn’t enjoy a good build. 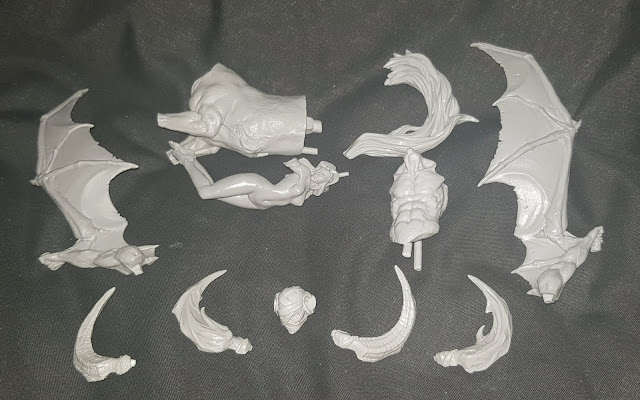 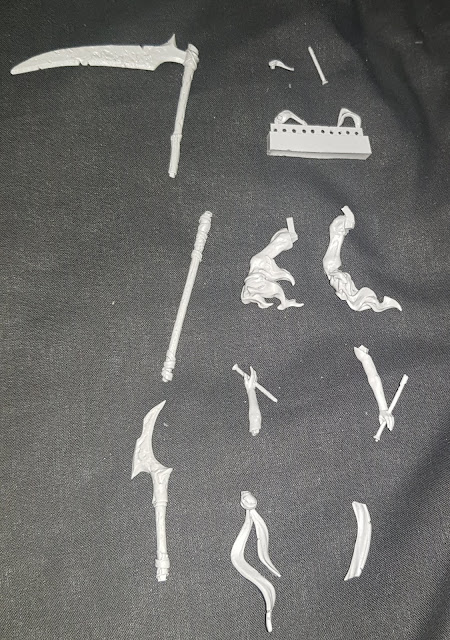 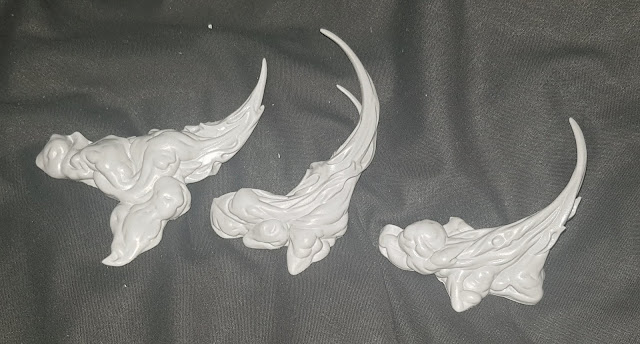 I took a really good look over the cast quality and my usual search for mould lines found just four obvious ones and a minor one.

One set of horns (you get a choice of normal or on fire options) have visible lines which will need some careful preparation. These are stepped slightly due to how the mould has cured or has been under too much pressure and distorted.

The other has points where the vents were but have just been clipped off. These will need some sanding and buffing but that is normal; except they are in visible places which could be tricky if you aren't comfy with cleaning detailed areas. 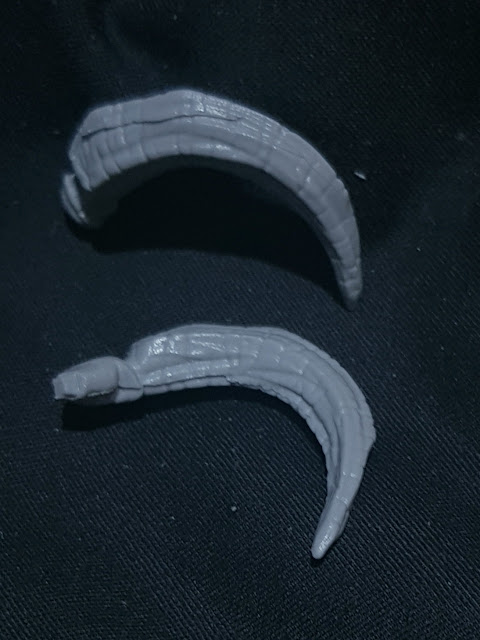 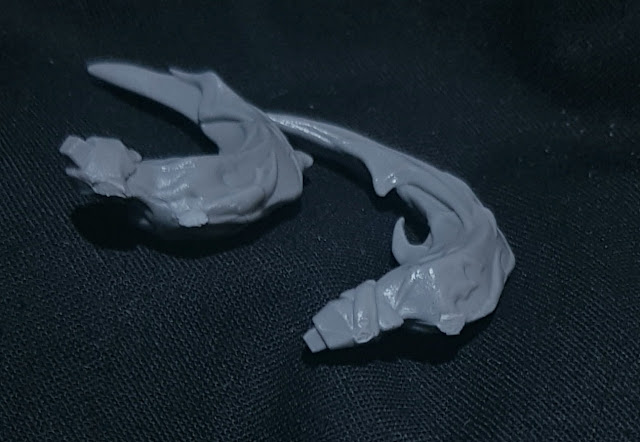 Either way the lines are quite visible, but the one on the head I almost missed. I held it under my lamp and there it was. It is quite fine but follows the bandage edge and won’t take much prep at all. 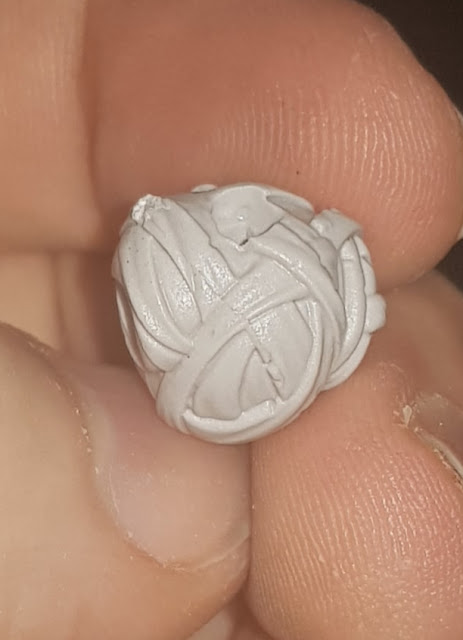 The head of Nessus as mentioned is bandaged up like some kind of hideous beast, this is also an interesting detail for the sculpt. 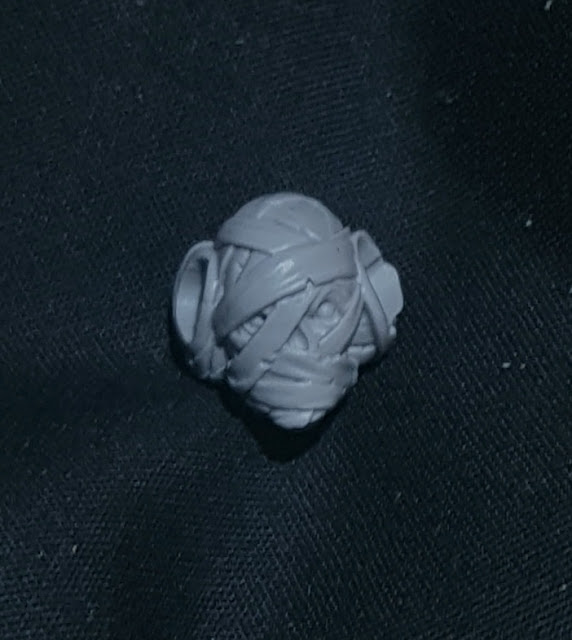 The rest of the cast have been cleaned nicely so no lines needing removing at all. Ok so mould lines aren’t the end of the world and we have all seen so much worse; and there are some weirdos out there who actually enjoy prepping models... ya know those crazy types haha... (yup... me... Steve)

Some of the parts are quite shiny and this could be due to mould release or oil seeping from the mould. Some of the parts did dull after wiping them but others stayed shiny, so I suspect this is the oils setting on the cast. Not only are they shiny but they have a slight pitted surface which happens in new moulds.

New moulds need dusting with either talc or chalk which reduces the amount of oil that bleeds out from the silicone and gives the cast a smooth finish. Sometimes when this step is missed out the oil covers the surface and when the resin cures it goes shiny and often leaves pit marks on the cast. So I think this is why some parts are shiny.

I spent some time at my bench with blu-tac and put the main body together and measured it. 200mm on the store and just over that on my bench. It is also as wide as it is tall so it is a pretty big miniature. 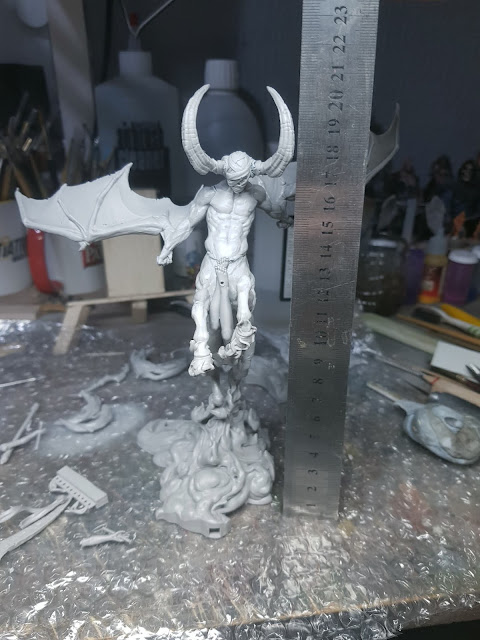 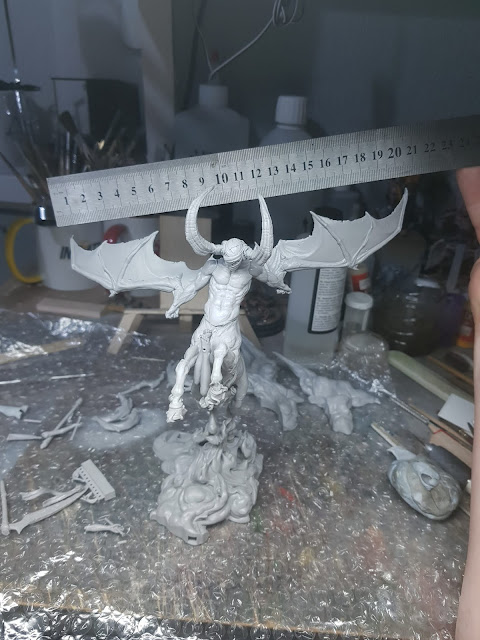 3D sculpting has progressed so much in just a short time and there are some outstanding sculpts on the market. Aradia have some pretty nice miniatures and I think Charon was my favourite until Nessus landed on my bench.

I am a big fan of mythology and art based on it, renaissance period specifically. These releases from Aradia hit my interest on the nose.

It would be nice to hear a bit from Stefan regarding his concept as I find it is a very cool piece of art.

The classic image of a centaur mixed with a dark Pegasus and a Minotaur produces this monstrous miniature and the anatomy of the whole sculpt works really well. The key and lock system all fit very well but the joins are going to need work to look seamless.

The detail of the miniature is all very clean and sculpted well. As far as I can see there are no print lines or dull edges from the printing process and the resin used is of a nice quality. 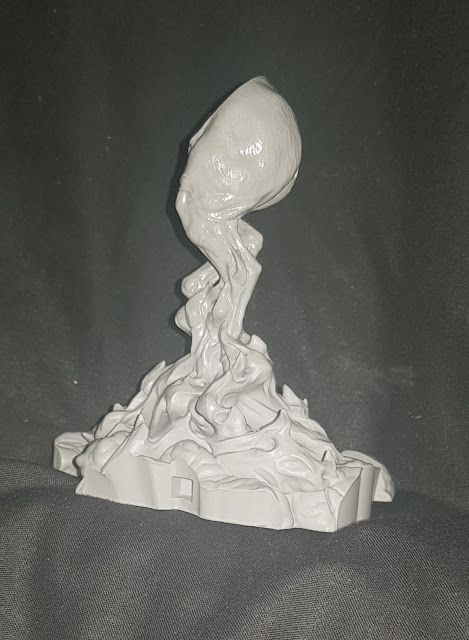 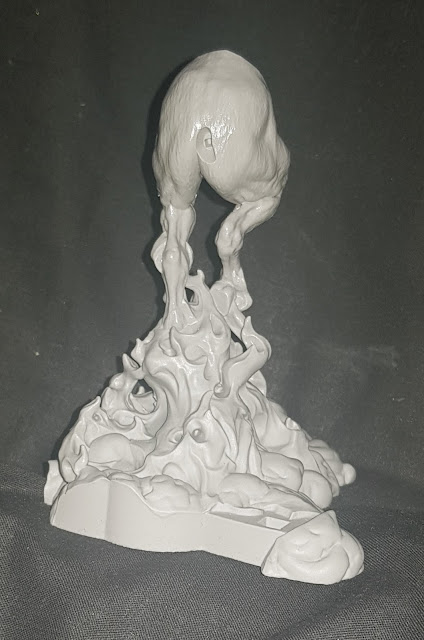 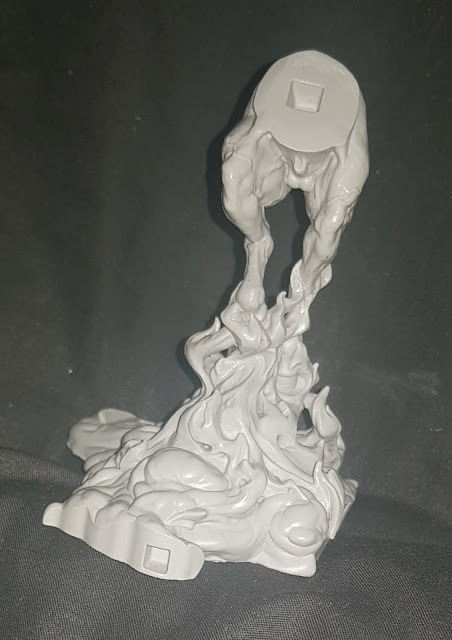 The lower section has 4 parts; all the flames surrounding Nessus are in 3 separate parts which all have their corresponding positions. This gives the base some width giving balance to the whole sculpture preventing it from toppling over. 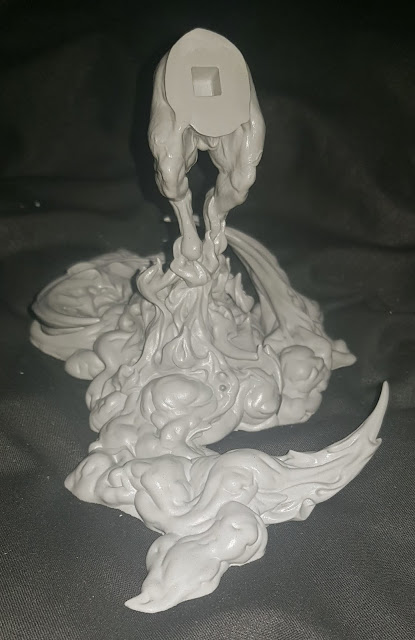 The musculature of the human torso is so nice and the veins on the horse as well as the long hair in places are nicely sculpted. 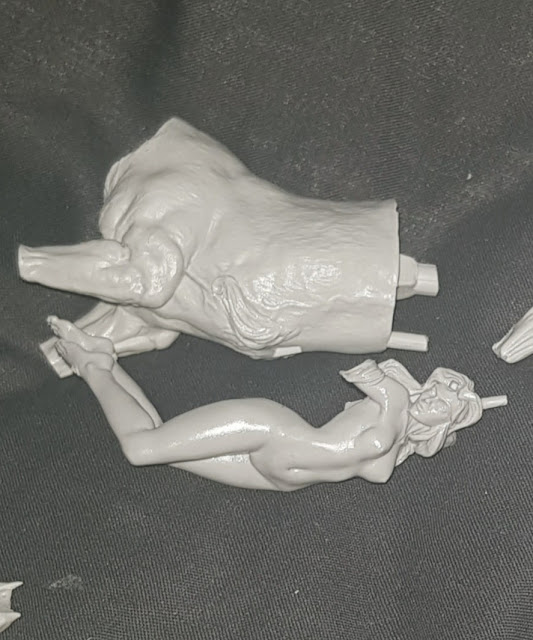 What I do find a bit perturbing is the joint between the horse torso and the rear end. It has been cut straight which is going to need some serious work to smooth out, I feel it should have somehow been cut around the legs to reduce the need for a filling and smoothing.

On a childish note it has a good set of nuts. Not like a Carrasco sculpt but they are present all the same, and once the female is in place her head will be right next to Nessus’ junk haha so childish but yet it caught my attention.

The inverted crucifixion is very satanic in nature and adds to the dark tone this miniature holds and will influence many paint jobs as this piece shows up on benches.

Like many of the Dante pieces, Nessus is an interwoven mass of shared aspects from the tale of the Tunic of Heracles and they have been sewn together very well by Stefan and Dmitry.

I do find the casting issues a little off putting as this miniature commands a €120 price tag.

When this piece lands on customers door steps I hope Aradia has taken a look at the casts before shipping as the clean up done gave this piece a nice pedigree, should the casting have been done perfectly. Although this copy will require some preparation; once the prep is done it is going to look glorious so a perfect cast prepared to a pro standard is going to look insane.

Once the guys from Aradia read this I am sure some extra care will be made checking the casts of future kits before they ship out because Nessus is one hell of a beast and really deserves nothing but the highest quality to make this a showcase miniature.

I actually really love the concept but the execution on my copy fell a bit short of perfect so if you are considering a copy and feel my review has dissuaded you don’t miss the chance to own a copy because one copy does not reflect the rest.

Take a look at the Aradia range and see for yourself how diverse their stuff really is.

If you like mythology or even just some out there concepts Aradia are very much worth a look. Head over to http://aradiaminiatures.com or take a look on social media. 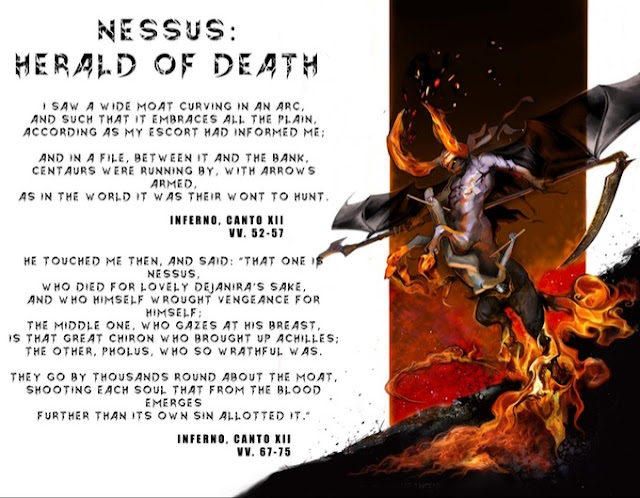