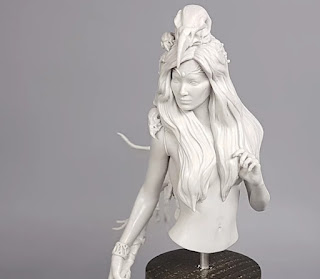 Massive Miniatures released a couple of busts at Scale Model Challenge 2019. I took a good look over 'A Moment of Serenity' a few weeks ago, but now I'll have a go over 'Avian the Forest Witch'.

In true Massive Miniatures style this bust has been sculpted by someone different to previous releases with Stanislav Che creating the digital sculpture. This is someone I've not come across before. 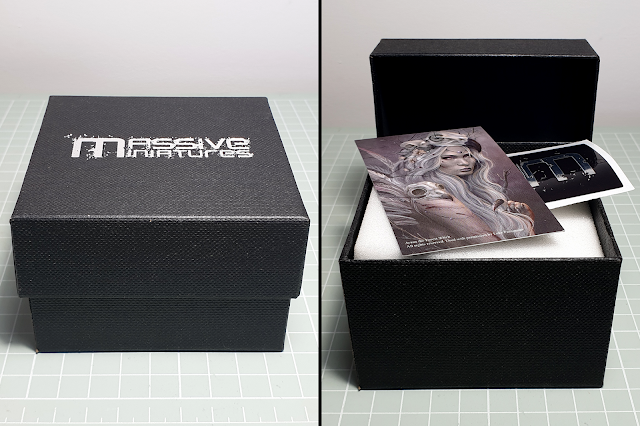 Presented in the functional but stylish black and silver thick card box as is standard for Massive Miniatures. Simple but always does what it should. On opening you'll find a snazzy sticker and double sided art card with a short story on the reverse. Gives you a good starting feel about Avian's character.

Stanislav had a stunning piece of artwork to recreate in the form of 'Avian' from Luke Fitzsimmons who has quite a catalogue over on Artstation.

As you can see the art is quite fleshed out and detailed so I'll be making comparisons to it as I look over the miniature itself. 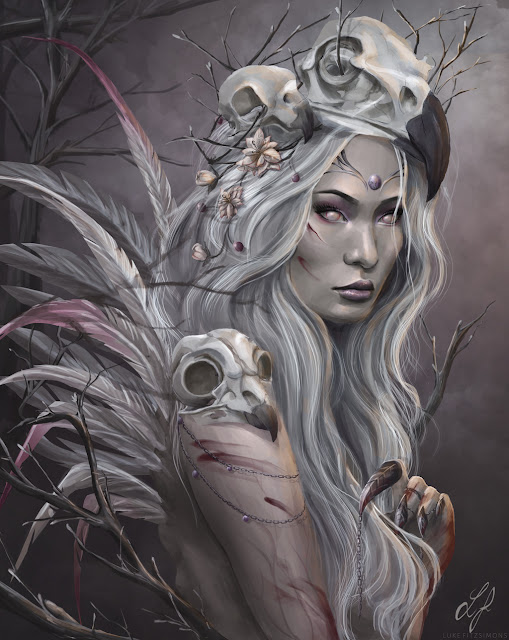 Under the layer of white sponge is all the parts to make the bust. No extra options but they're not needed.

One main central core of body, head, and a lot of hair and feathers; and a zip lock bag holding the other twelve parts. Most of which create her staff. 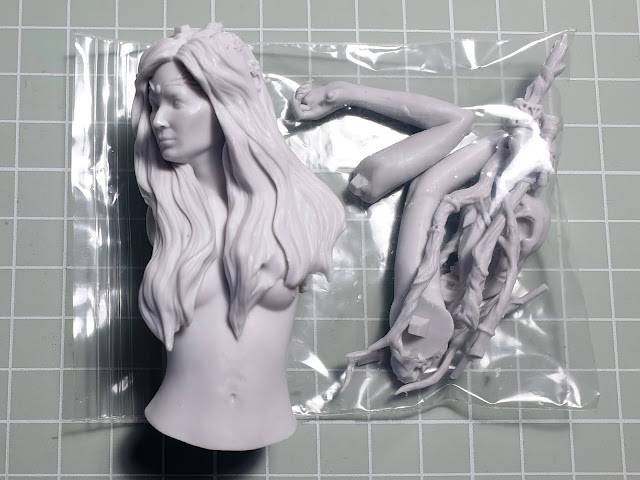 Now you've likely noticed that Avian isn't really bothered about normal concerns, like clothes. Though in the hands of many companies it would've likely been more explicitly designed. This has more been handled artistically rather than the often used pin-up route. Something I'm pleased to see. 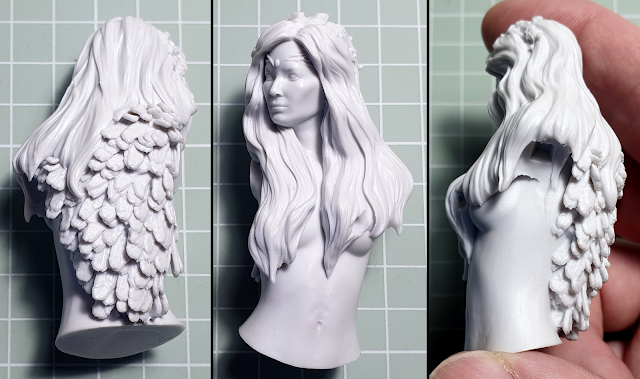 Looking around the main section you can easily notice some fine details like her head jewellery,  and the plants on her hair.

These are great details. Especially the flowers which in places are quite delicately crafted. The one I tried to capture below for example actually has space between the leaves and her hair which has been cast perfectly by BrokenToad.

However; this part also has a whole load of feathers. These in the art are longer, more pointed, and much more sparse. I'm unsure on the current look to be honest, Especially when some other areas of the sculpt are so well rendered. Don't get me wrong; I don't hate them. I just really like the style of the art.

There is minimal cleaning to do on this section with a piece to remove on the head which will be hidden under a large bird skull, and a line down the left side which will be under her arm.

Looking from different angles you can easily spot a couple of pegs to attach bird skulls. Also a really odd shaped bald patch to rival any fryer. That however is a great example of how this bust has been digitally cut into parts. Everything has a snug fit and you'll likely not need to do any gap filling at all. That has to be one of the things that is a massive plus with digital sculpting.

There is a subtle hint of an iris which luckily follows the sight line really well. Like I said though, it's subtle so you could likely smooth it over with some PVA or paint if you want to change her facing.

As with quite a few digital miniatures there is a couple of odd points with the hair where instead of curving around solid areas it cuts off. Prime example is under the jaw. Fixable and not uncommon. Bit more time on the hair could've helped. Especially with the aforementioned plant details being so good and it framing her face which is a strong focal point. 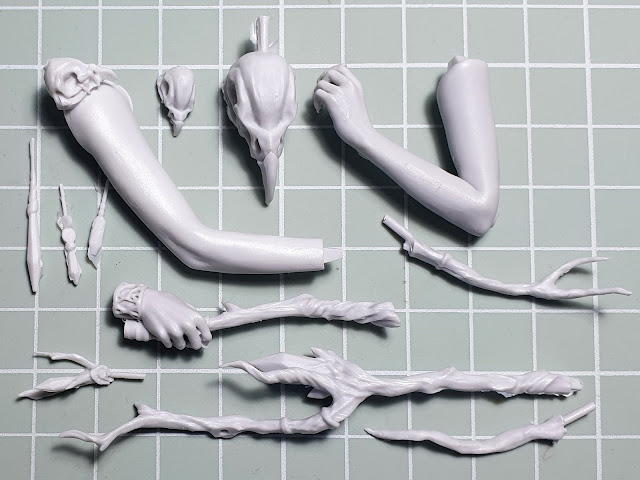 Now onto the contents of the bag. Couple of bird skulls, her arms, and eight parts to make up her staff.

There looks to be a few parts to remove from the moulding process but all placed in areas that join to another part. Must say, I wouldn't want to be casting those tiny gems.

A little bit of flash can be seen which all came off easily as expected.

Her headdress is a huge bird skull which has been well designed. Mould line runs along the lower part to the jawline and up to the pour point. Easy to clean up with some scraping and a little sanding.

There is a smaller skull too which I couldn't find a mould line at all. 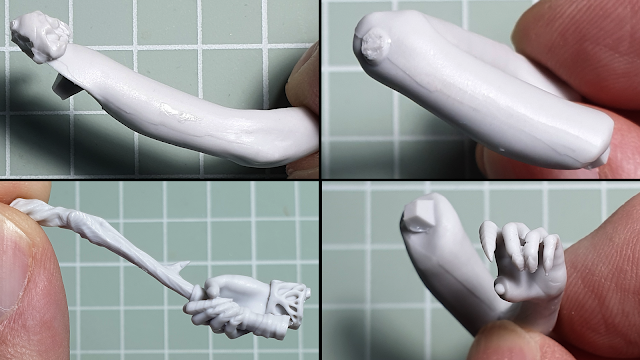 The arms both needed some cleaning but nothing tricky. Her fingers on the right hand needed a little work between them which I found to be a little more difficult, but I didn't want to snap any digits.

She has some interesting metal claws on her fingers which breaks up all the flesh with a different material. Also of note is her bracelet. Almost coral like in style so could be painted in a few ways depending on your ideas. Would've been nice to have a few of the fine chains from the art on her arm too but that's just me being picky.

Great bump where her thumb would be but you'll see exactly why in the assembled pics further down. Nicely done.

Her staff is quite detailed. Quite branch like is look and feel. Though from some angles I'm left wondering if the lines are meant to be sculpted texture or are left from the printing process.

Again you can see the points where parts join each other and it all goes together well... once you work out which go where. And yes, I did refer to the web store photos to help.

The tiny gems I did photograph but due to the tiny size, there wasn't really much to show. I nearly clipped off the long parts thinking they were excess but from the site photos it looked more like they're hanging so I just cleaned the flash.

I'm still playing around with getting some nice 360 videos happening so you can see all around. Let me know what you think and if these help.

On the whole I'd say it's a great looking bust which assembles together excellently as you can see from the images that have had a quick clean before assembling with blutac (apart from the staff details which needed to be glued). Her right wrist held without any help at all in fact. It's just a shame that the face is completely symmetrical (another common digital sculpt oversight), and that a little more time wasn't put into the hair and feathers is my view.

I will also recommend a good steady plinth too because although BrokenToad resin does have a slight rubber flex, I doubt the staff and gems would survive a topple over. 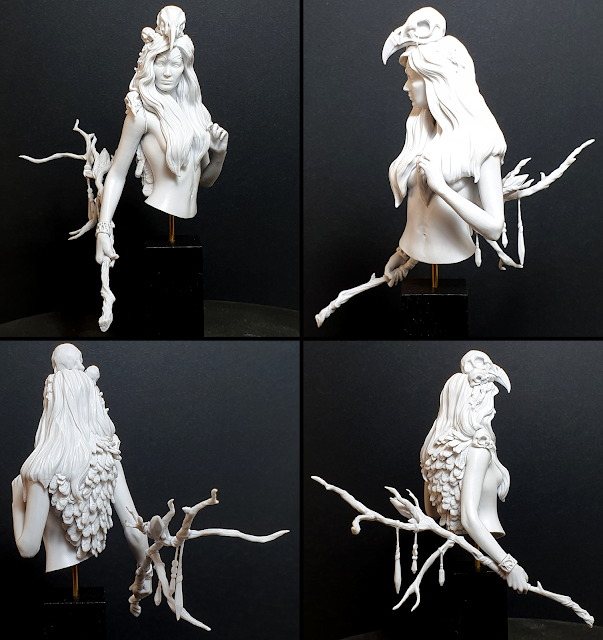 Avian the Forest Witch can be purchased direct from Massive Miniatures at a price of £40 which is good for the size, resin quality,  and amount of parts involved.

Thank you for reading and may you brushes do what you want them to.
Written by Steve Haydon (Forté) on Monday, December 02, 2019
Email ThisBlogThis!Share to TwitterShare to FacebookShare to Pinterest
Labels: 2019, Bust, Fantasy, Female, Massive Miniatures