Back in 2014, Black Crow Miniatures released their first creation on the miniature community which was well received as being a really high quality product.

To date they have eighteen releases (yes; two of them were different versions of previous releases) and majority have come from concept art by Guillermo González.

Eldareon marks the second time Edgar Ramos has been given sculpting duties and if you've seen his previous Wraith I'm sure you can understand why. Especially as it has sold out multiple times. 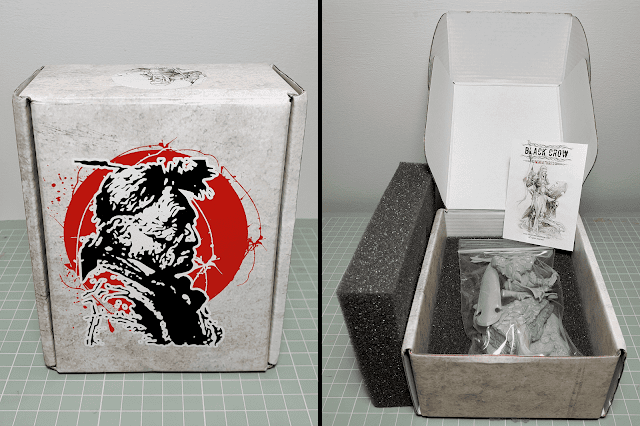 My first experience with a Black Crow miniature was a few years ago and their packaging at that point was a pretty cool tube design which as you can see has gone in favour of a more practical, if less original, sturdy card box. Full colour printing all over though so it certainly stands out against some of the plainer approaches out there.

No box art or information and the only way to tell what miniature in inside the box is a round sticker which in this case shows a section of the concept art.

Inside you'll find a small double side printed card with the Eldareon art on one side and the resin figure on the other. Always good to see the original art I reckon.

Foam as you can see is the order of the day and there's no messing around here with two solid slabs of the stuff with most of the parts held between in a large zip lock bag. His pole arm was under the bottom layer of foam. 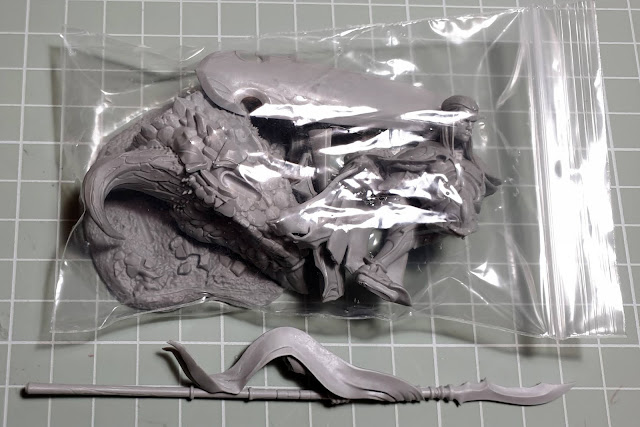 Quite a bit packed into one bag as you can see. Perhaps two bags could work better or leaving the base parts out. Either way, nothing was damaged which is always the most important thing.

Eights parts in total with two of them creating the base.

Really pleased to see the base in two sections as I'm one of those who likes to build their own basing. But that beast head would need to be used. Not just because it is the right height for his left foot, or because it has parts of his clothing sculpted onto it...

But because frankly, that beast looks awesome.

I'll admit that I find myself asking "how did he decapitate that with the weapons he is carrying", but then sensibly tell myself to shut up because a) it's fantasy, and b) it's dammed cool.

That inner neck section is just asking for some gore work.

Looking over this part you can see that the detain is crisp and sharply reproduced. Not surprising as the caster is Ciprian who seems to be able to cast anything and looks to be casting constantly. Just two bits to trim off and sand on the horns and a third on the underside. 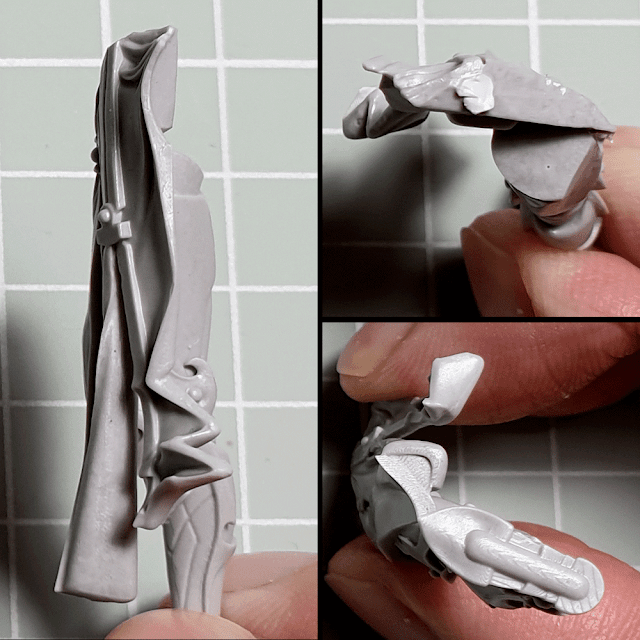 On to the right leg which again has some great and well formed detail. One small bit to trim and sand which is in an area which joins to the other leg section so no big deal. And the only bubble I've spotted anywhere... which isn't surprising with it being an enlarged photo.

What you can see here, and in a few other photos is one of the drawbacks of digital sculpting and printing. Print lines. Many are in areas which join so don't matter but there are a few in visible places. Primer will likely fill and smooth those but just in case a Milliput wash or something like Mr Surfacer could be an easier option to trying to sand them. Especially if you like to do a lot of glazing in your painting. Similar to the right leg really. All clean up is in areas which won't be seen once assembled apart from the print lines really.

I will say though, as I have done before. Some of these digital sculpts are ridiculously good to assemble and the majority of this kit is no exception with joins being close and likely needing next to zero filling at all and I think just a couple of pins in two areas. Those being the waist for added strength and the right arm which has a smooth join.

As is often the case with Ciprian; finding mould lines to remove is a challenge as they either don't exist or are seriously fine. There is one along the side of that torso. Good luck spotting it though.

You can also see the armour detail too and there is quite a deep part in the cast on the back which I reckon is hell on the silicon moulds.

Pour point again hidden at a join. Needed a little shaping under the armour plate but that's more me being fussy 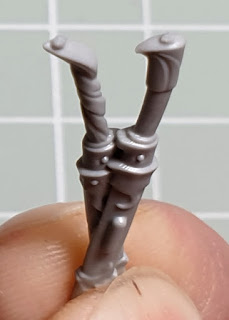 Those little bumps on the handles are the pour holes so a tiny trim and sand quickly fixes that.

Getting to the point that I'm almost looking for flaws to report that just aren't there.

As you can see too, that odd shaped bump on the side of the scabbard actually has a matching socket so it fits perfect with the belt. 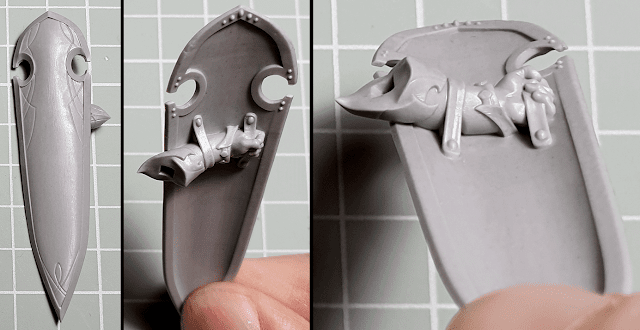 That shield just screams elven design. Long and slim with some pattern details too. Might sound odd but I almost wish their wasn't the sculpted pattern as it reduces that large flat section which is just asking for some kind of elvish freehand. Easy enough to fill and I suppose it gives something for those who don't like to paint designs themselves.

Inside is pretty plain. Left hand and forearm with some good detail and those all important straps too.

And again keeping quite a traditional elven feel with a long and curve bladed polearm. Perfect for using through those holes in his shield. Though I never did get the point of adding a long flowing piece of material. Just my practical head getting in the way of cool as usual though more than anything.

There is a slight warping to the polearm which with things like swords is a case of a quick hot water dip and straighten. Likely be the same here too though I haven't tried it.

Bit of mould line down a side and running through the material as I found when cleaning up. May need a little putty to full rather that scrape it away as it crosses a couple of nice folds.

This is certainly a figure of focal points and can be viewed from a few angles rather than having one sweet spot so there's flexibility, especially if you're planning a vignette or diorama.

I'm still getting used to trying to capture a 360 video (nope... I don't have a rotating turntable. Christmas perhaps), so hope you've had some motion sickness tablets.


Hope you survived that with your lunch intact. It will get better I promise. The videos too. 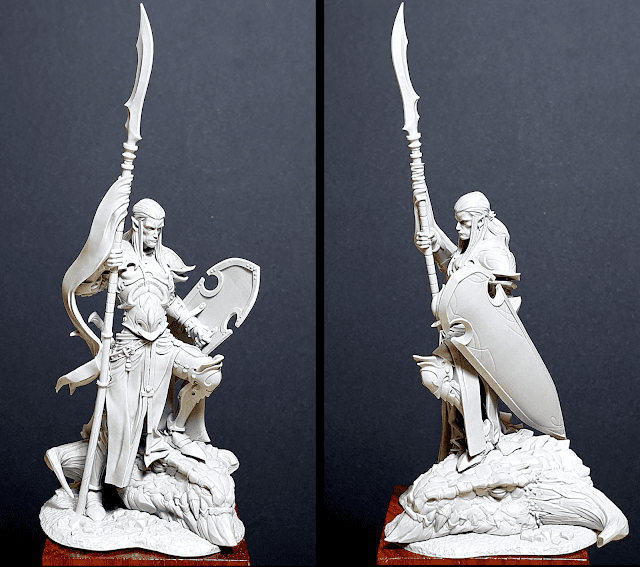 This is one stern and imposing figure which would stand out in any collection and gives you quite a selection of materials to play about with. From the beasts scaly skin, large teeth, huge horns, and internal neck details through to smooth metals, flowing cloth, long hair, and elven skin. There's lots to get into.

I've already seen a few of these painted up and it looks like it'll be a great one to really play with metal effects, whether you prefer metallic or non-metallic painting styles there are plenty of angles and curves to create implied reflections and other effects. 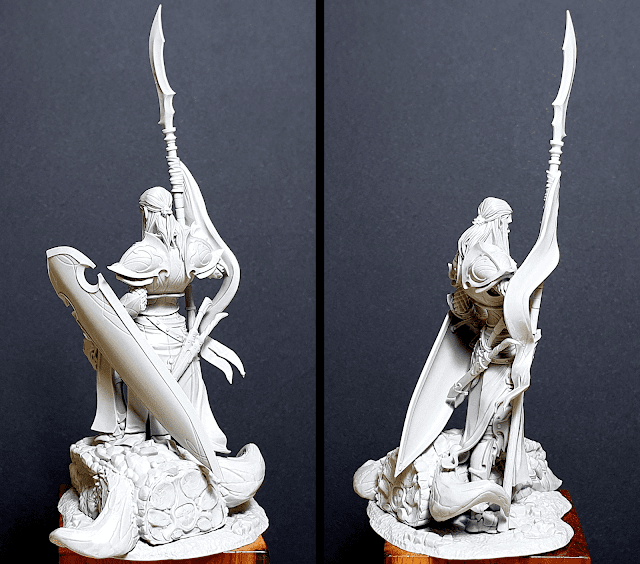 I wasn't sure whether to mention this.. but why not?
For some reason the sculpt of his face reminds me of the actor Bill Nighy. Unsure exactly why but what do you think?
And on that note I'll finish up.

You can purchase Eldareon direct from Black Crow Miniatures for a very reasonable 42.35€ (inc. VAT) and check out their Facebook page and Instagram if you would like to keep up with their releases.

Many thanks for your time as always. Always much appreciated. Feel free to leave a comment and we look forward to seeing you next time and in a new decade.
Written by Steve Haydon (Forté) on Monday, December 23, 2019
Email ThisBlogThis!Share to TwitterShare to FacebookShare to Pinterest
Labels: 2019, 75mm, Black Crow Miniatures, Review