(Say this in ya best pirate accent)

AAAAR ya land lubbers. Cap'n Normski ere sharing a piece of my bounty liberated from the French mainland from the coffers of Romain Van den Bogaert. Read along before it get buried with the rest of my treasure under GreyMountain...

Why are Pirate reviews the best? Coz they AAAAAAAARRRR!!!

And what is a Pirates favourite hobby subject? AAAAAAART!!

One more? (please no)

Nah, I think that is enough of the cheesy Pirate jocks for now. Wouldn’t want to go overboard with the pirate jokes and wouldn’t want to hijack this review with loads of Pirate puns would we me hearties..

Let's take a look at the new release from the RVDB studio. Horizon. 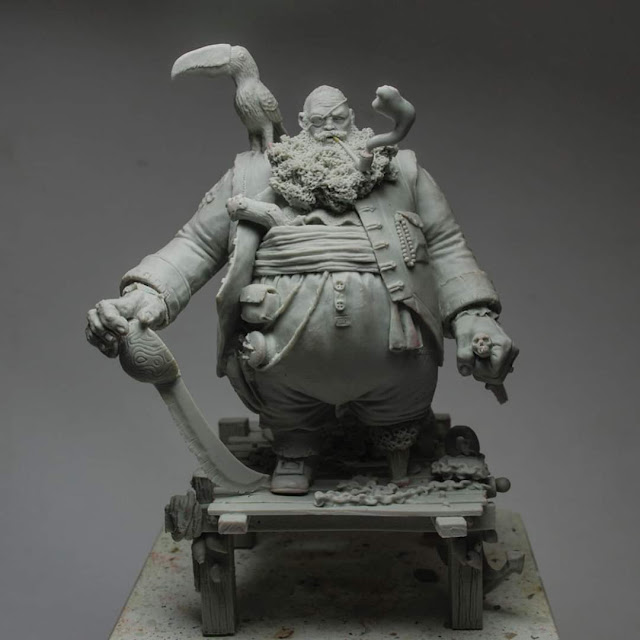 Romain Van den Bogaert doesn’t usually sculpt figures of this scale as we usually see busts or large head sculpts coming from his studio via various companies in the hobby.

We know Romain for his very cool pieces the little Demon Archivist sat doing some demonic shenanigans with his book, and the 2nd version (Archivist on the Run) sculpted walking along going on an adventure with his devil friend on his shoulder.

This figure is a change in direction for Romain as it is a 80mm sized sculpt, full figure with its own scenic base in the style of a jetty covered in various nautical details. and I can only think of two other releases around this scale from Romain.

At €60 this piece isn’t the cheapest on the market but you can get 75mm miniatures with less parts and details for much more. Other miniature producers charge way too much for their stuff and that is shocking. but that is another story for another time.

Horizon is a bloated buoy shaped guy with a tiny head due to his engorged torso with hands like shovels and a beard ya could scrub ya dishes with. When I first saw this as a sneak preview at SMC 2019 I thought, "yup I like that for sure" and Romain kindly suggested reviewing it as we had chatted about reviews in the past.

Well here it is so let’s take a look at what you get in the Romain Van den Bogaert branded box. 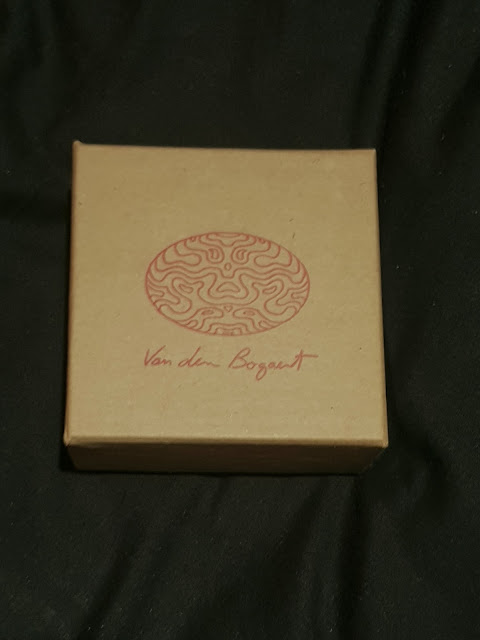 Inside the box you see the zippy bag with the parts in and the main body of the figure. 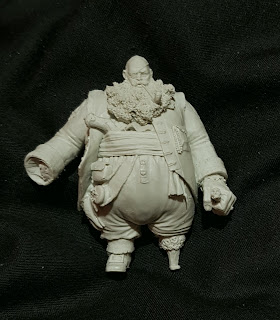 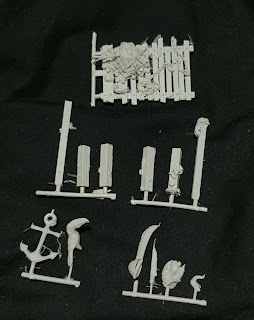 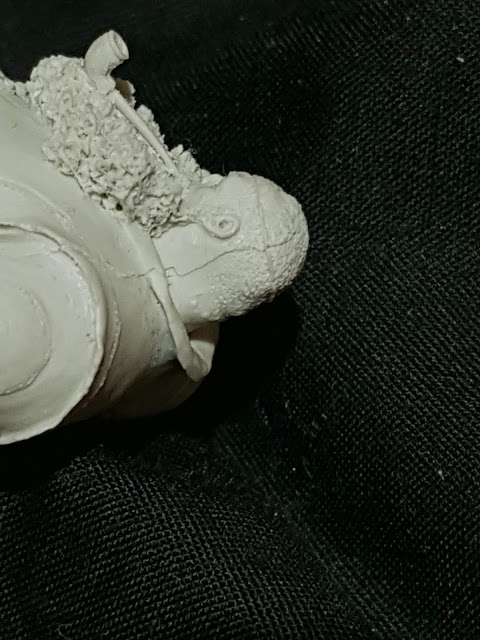 Unfortunately the main part has a mould line running up its left side which terminates at the top of the head. Now working with moulds I know this can happen and to avoid the casting issue I think the mould would have needed some creative cutting to allow a seamless cast.

However; this miss alignment is present and is going to require some clean up, especially on the head as the line runs through the hair detail. Everywhere else is just a scrape and buff but the hair will need extra attention. The rest of the cast only suffers from flash and no obvious lines. This could have been scrubbed off before packaging but as we are all aware, flash takes seconds to remove.

That being said; the detail of the sculpt is really nice and has survived the casting process well, but I can see the moulds taking some abuse due to beard and pipe features that will pull bits of mould out after a good run of casts.

When I saw this figure my first thoughts were to the old MProyec sculpt of Barbarella but on closer inspection the stance is the same but the character is different. The sword in the right hand, the musket in the pants and the wooden leg echo each other but the anatomy is totally different.

Horizon is balloon shaped and wears no hat and no bandanna. I quite like that feature as it leaves the figure open to conversion should anyone wish to add either later.

Funnily enough this crustacean wearing pirate resembles another fat bearded guy who will be visiting people in a few weeks, no not me. I’m not that sociable... (or well behaved). So a December release could more than likely spark some colourful paint jobs.

As mentioned; there are pieces of crab hanging from his cummerbund and scattered across the jetty with other molluscs like sea snails sliding around the legs of the jetty. 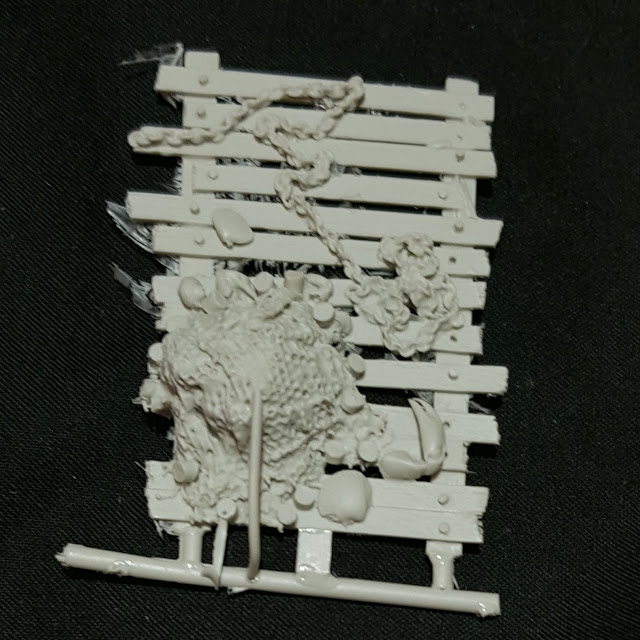 Out of the 14 pieces the jetty is made up of 8, and they are loaded with detail such as the snails and clam and crab claw as well as a net and an anchor and chain.

These details help set the scene of the piece but I’m sure many will make their own bases in time but it is nice to have this extra detail should you not want to break out the diorama skills.

I am quite looking forward to seeing snail trails painted on this as it is something we rarely see on paint jobs. 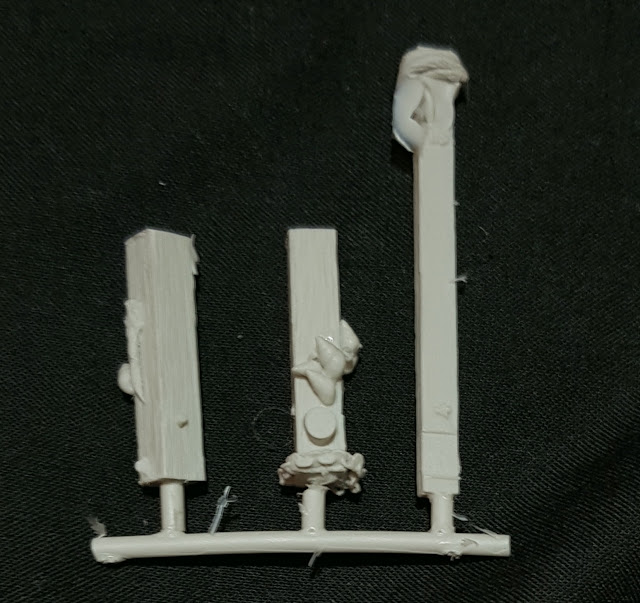 As this is a traditionally sculpted piece, you can see the work that has gone into it when you handle it. Digital sculpts are so clean and precise you just don’t get the same feel of a traditional sculpt when you hold it. There will be some filling required due to cuts being made but all parts leave only little gap once in place so not a great deal to do to get this piece to paint. I love digital sculpting, but traditional will always be my favourite out of the two media.

Other details worth mentioning are the Toucan on his shoulder which I also like and look forward to painting... an old Guinness advert for colour choices will come in handy for this. 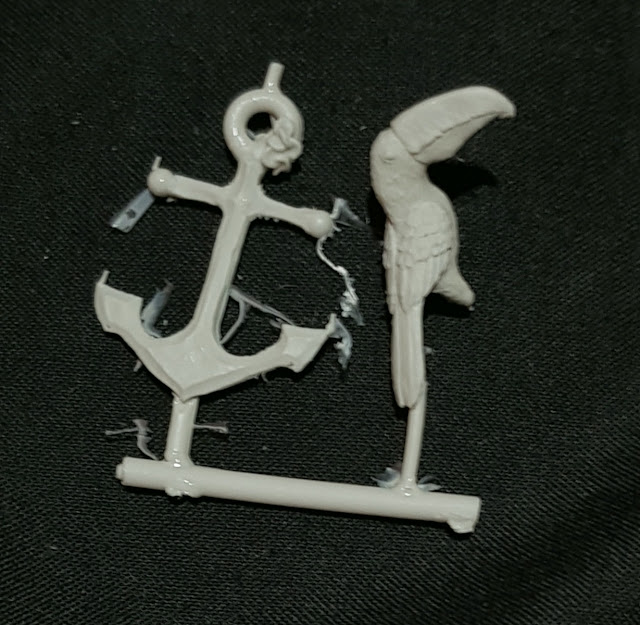 He is also smoking a pipe which you can either have the smoke coming from it or choose not to but you can decide that later.

There is an octopus motif on his back and his sleeve. Different from the usual skull and cross bones we all expect. Bit more C'thulhu style. 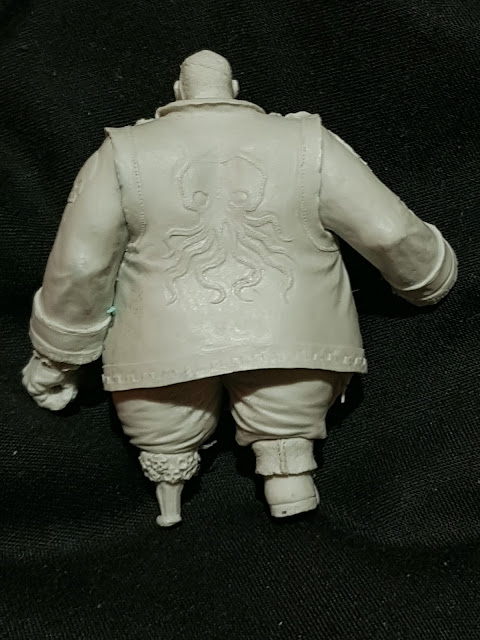 I particularly like his facial features and he reminds me of the king in Chitty Chitty Bang Bang, except he has two eyes and not a patch like Horizon does. In fact, I also think he looks a bit like Tom Hardy in Bronson. 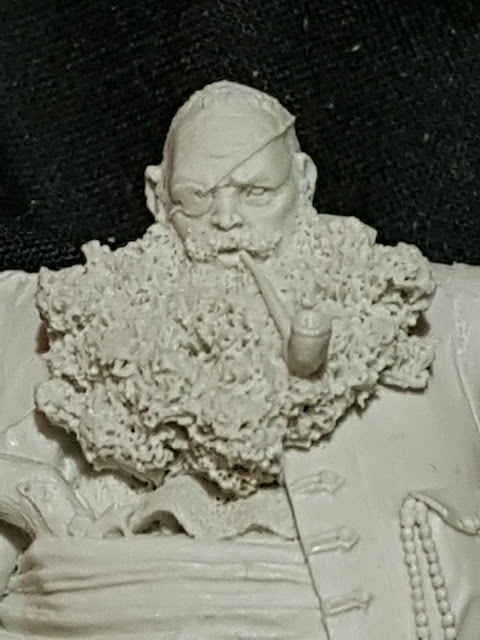 He has however over indulged on his pirate feasts and has the lower half of a Weeble (Google it haha). They wobble but they don’t fall down, a bit like Horizon should he be pushed over while swashing his buckle.

So, to summarise; this miniature I would say it is a very well sculpted piece with stacks of character and will encourage many fine paint jobs for sure. The casting issue should have been cleaned up before shipping and that would have made this and extra nice quality piece.

Horizon is very much worth a purchase and I hope to see many painted in competitions and personal galleries on social media very soon. I also hope this is a new direction for Romain and we see many more full miniatures from him over 2020 and beyond.

If you wish to purchase a copy head over to http://romainvandenbogaert.com/boutique/horizon/
Written by Normski on Monday, December 16, 2019
Email ThisBlogThis!Share to TwitterShare to FacebookShare to Pinterest
Labels: 2019, 80mm, Pirate, Romain Van Den Bogaert