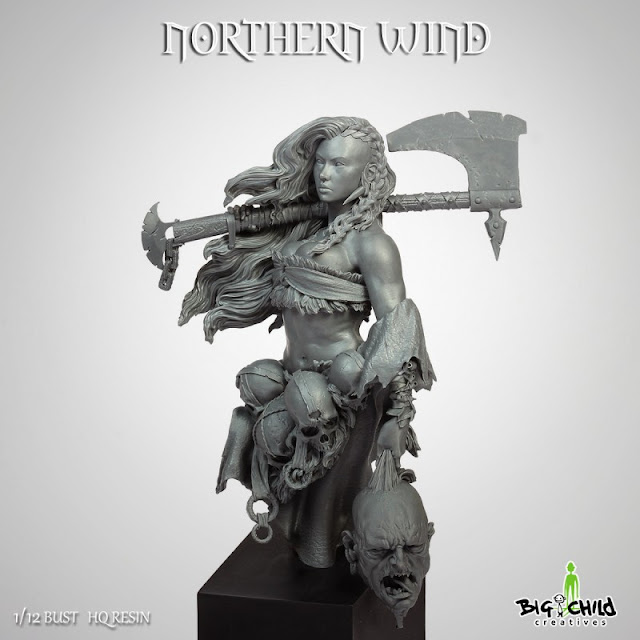 Digital sculpting and printing has been with us a while now and it has improved enormously. BigChild Creatives have embraced this tech and produced a range of miniatures ranging from Orc Pirates to Roman Legionnaires.

Northern Wind is a new release from BigChild Creatives and comes in at a reasonable 38€ (including tax) at a scale of 1/12th. 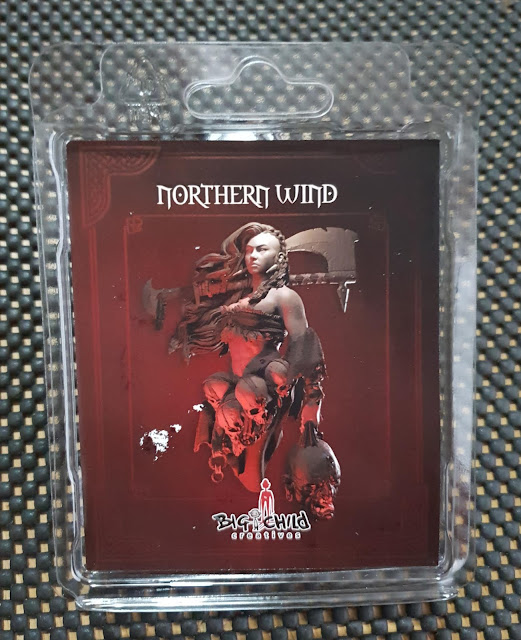 It has been cast in that dark grey hard resin that BigChild have settled on for their casting needs. It is a lot like the resin Raging Heroes used for their TGG range. 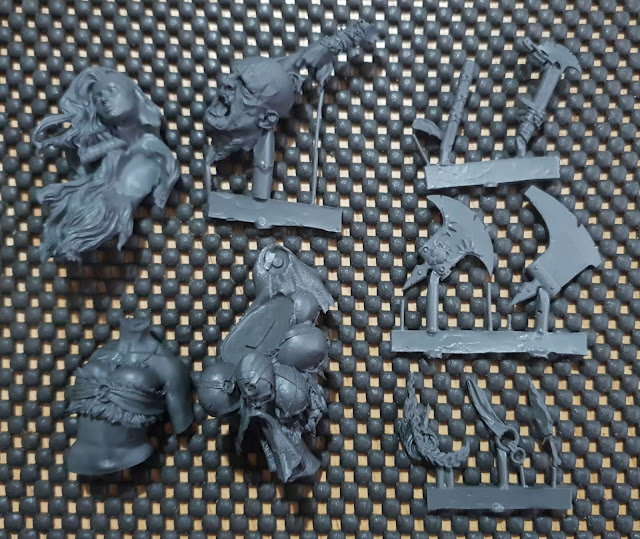 It sits in the moulds really well and captures detail crisply, but it has absolutely zero flexibility. So if you drop it there will be breakage which is a negative to such hard resin. Of course, we don’t want too much flex but a little goes a long way when handling miniatures.

My usual format is to look for negatives. Aside from the brittle resin I gave the casts a look over and found the mould lines I always hunt for.

I found just one mould line but it is well within acceptable limits and I am kind of glad it is still there. The hard resin will require sanding and buffing to gain the same smoothness as the cast surface. 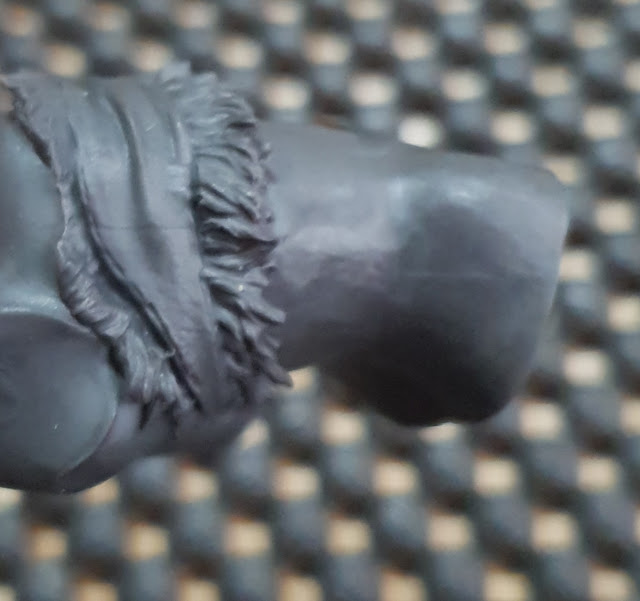 Now anyone reading my reviews will know I always go for the negatives and talk about clean up so now you will see me do a total 360 on this model. You guys will no doubt think “Oh come on make ya mind up”, but stay with me haha.

This cast has been cleaned up which I am happy with for sure, BUT part of the clean-up has been done a little bit aggressively and looks like it has been cut rather than scraped or sanded. This will need a little work to get it back to its intended finish. 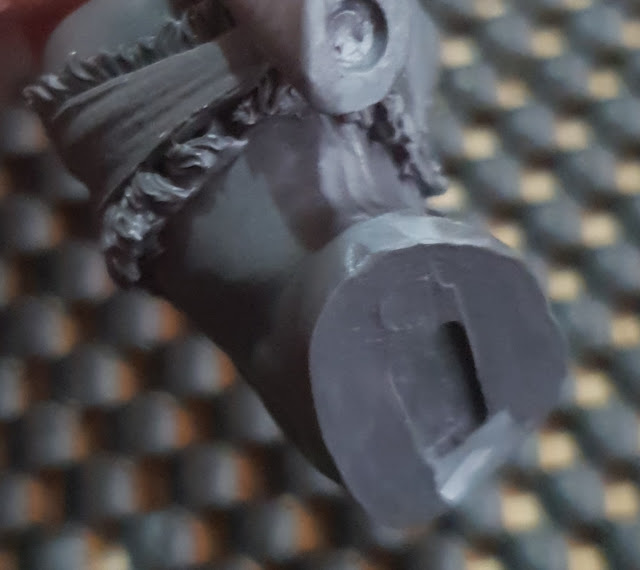 The other cleaned areas are highly visible due to the colour change in the surface where the blade has been in contact. 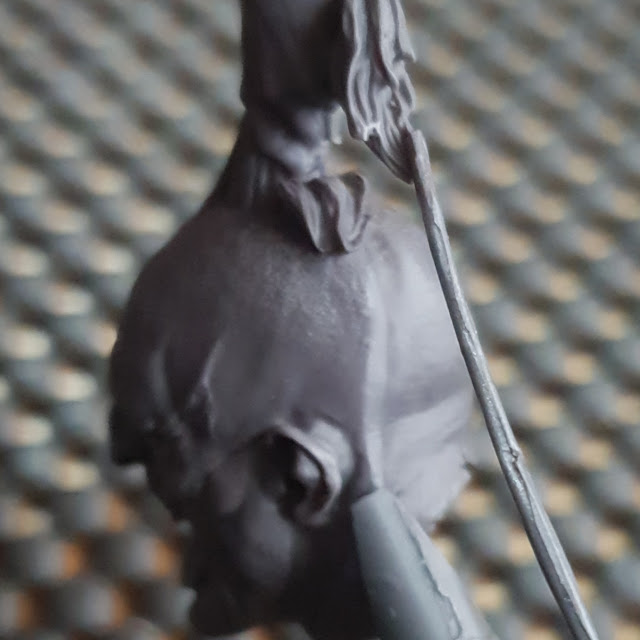 Now don’t misunderstand my intentions, they are not to bust chops or pull things apart; I simply have a personal standard I think we all should hold in our business of production.

When producing a miniature or a bust we sell them as quality products, we should at least clean our casts to a reasonable standard which BigChild have done in this case.

Now here is the fun bit which you will all laugh at...

In the case of BigChild Resin I would have preferred to have cleaned it myself because now I have to prepare half done clean up. This is only the case for this kind of resin as it will need a series of sanding sticks and buffing to regain the surface finish it needs to keep the consistency for the painting surface so the paint has the same texture across the skin.

I still stand by my ideal that we as producers should send out our casts in the best quality condition the customers deserve.

Now the 360 has been dealt with let's actually look at the design of the bust.

1/12th scale is a strange size for a bust in my opinion as I am used to the 1/10 scale pieces which I find an ideal canvass to work with. However; I think 1/12th scale is a nice stepping stone for those who are intimidated by larger pieces.

Often war gamers step up to display type painting and ask for advice on which busts to paint. I would suggest getting 1/20th scale or 1/12th scale. When compared to war gaming giants etc are a similar size so these scales are perfect for stepping up into the bust painting world.

Northern Wind follows a current trend of the Barbarian Genre led by Black Sun Miniatures but that is for another day. Her imagery is that of a youthful Warrioress surrounded in trophies of her vanquished foes and she is heralding a severed giants head. 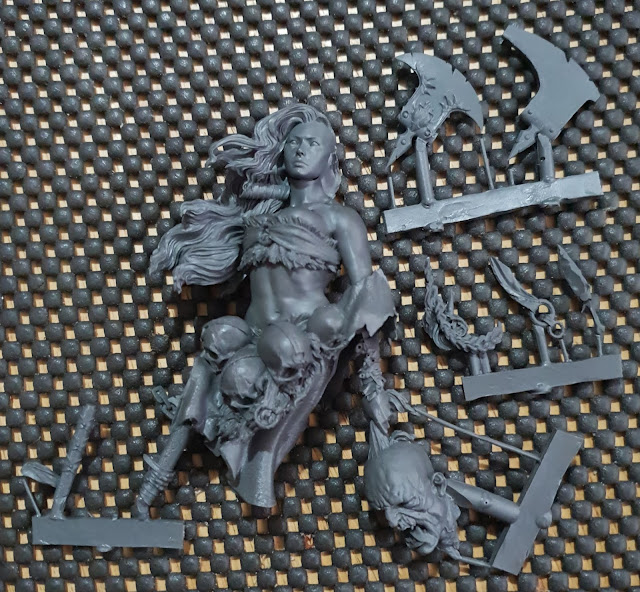 The low part of the torso is draped in a cloth which doubles as the connecting point to the plinth which has recently become a popular design aspect. She comes in 11 parts in a blister pack with printed card inlay at the previously mentioned 38€.

The cuts of the bust all fit together really well and only some parts will require minimal filling.

The bust is quite stylised with flowing locks and an athletic figure and is adorned with skulls. There are quite a few of them and I have seen comments of "too many", but this is a fantasy bust so who is to say these are wrong. Fantasy means exactly that, so those who criticise have an opinion and are entitled to it; but doesn’t mean they are right. The skulls are atop of furs held by strings, straps, buckles and rings which are nice little details.

The anguished look on the giants face is quite apt considering it has just been hacked off. May have been a tad painful...

Her boobs aren’t overly exaggerated, which is a nice change for a female bust and we all know how those balloon boobed busts look tacky. So bonus points for not making this look cheap.

The axe has been cut into three parts which I assume was for ease of casting. It comes with a head swap option of a half moon blade which has chaotic type details on and a blunted tip drop blade option. Both have a skull splitter on them.

There is a stone chipped blade dagger which sits between the skulls and the braided hair piece which will require just a small amount of filler when in place.

All these small parts fit in well and make Northern Wind quite a nice bust.

In summary, I find this bust to be quite a nice piece and the concept is very much of my interest (that being barbarians). The 3D sculpting has been done very well by Hugo Gomez Briones and has been printed in very high quality with no print lines ruining the surface like I have seen on many recently. The quality of the bust is nice. I am not a fan of the dark brittle resin and the clean up will require some time but once buffed to the correct finish it will be a nice bust to paint with plenty of textures to play with.

All in all; Northern Wind is a nice miniature. Aside from the resin and the clean up I am quite happy to have reviewed this bust from BigChild Creatives.

If you would like to add a copy of Northern Wind for your collection you'll find her direct from BigChild Creatives at https://shop.bigchildcreatives.com or an official stockist like Mr Lee's Minis.
Written by Normski on Monday, February 10, 2020
Email ThisBlogThis!Share to TwitterShare to FacebookShare to Pinterest
Labels: 1/12 scale, Barbarian, BigChild, Bust, Resin, Women