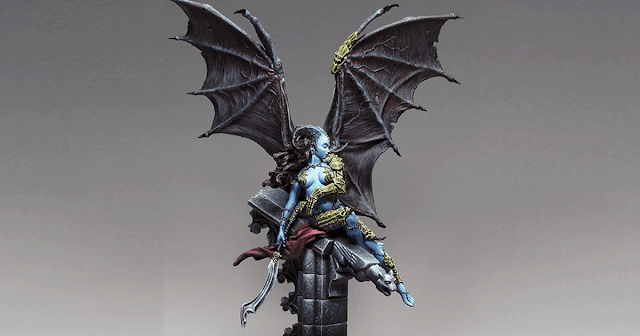 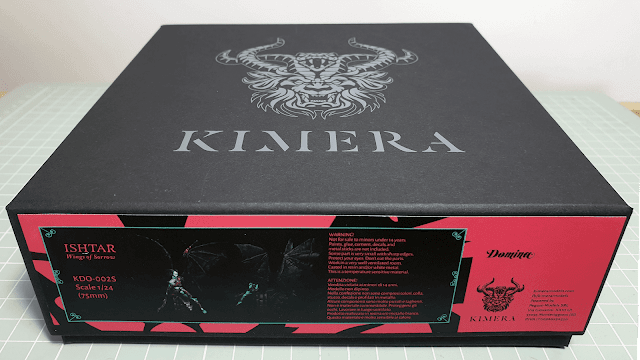 Released in the first half of 2017 by Kimera Models; Ishtar Wings of Sorrow is the second figure in their Domina range. To quote their site "Domina is a fantasy series dedicated to sexy and sensual female figures". To date it holds six figures and four busts.


Ishtar is still available in their original, larger black box packaging (unless recently changed) with the company logo taking pride of place on the lid. A sticker on the bottom edge shows which figure is contained, and another large full colour sticker showing the box art is one the bottom of the box too (but you don't need to see that really).

Under the lid is a full colour leaflet which can be seen more below.

Now then.. This box was plastic wrapped which I feel isn't really needed as the lid is taped down. The thick foam lifted the lid a bit when I cut the tape too so there was no way any of the contents was going to move around during shipping from Italy to the UK. 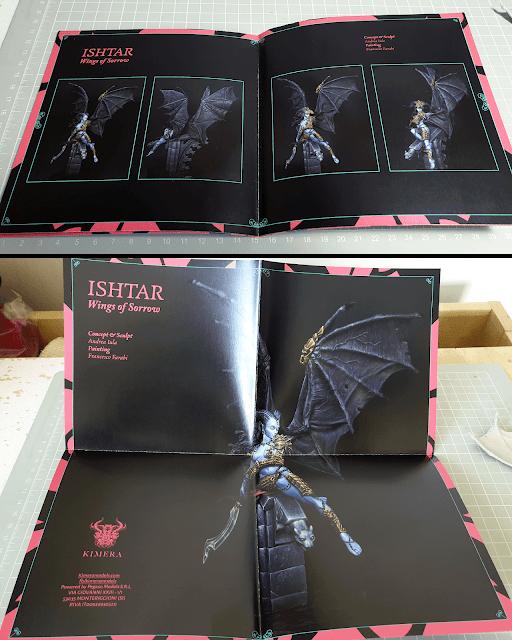 That colour leaflet is really nice. Showing off the box art by Francesco Farabi. This also includes two photos using the optional parts. Unfolding to show the large photo is a good touch too.

You'll also find the person behind the concept and sculpting named here too. Andrea Jula is behind this creation (who has sadly left miniature sculpting for other things) and he was one of the driving forces behind the look of the Pegaso Miniatures range so not an unknown to many. Possibly known more for his historical miniatures though. 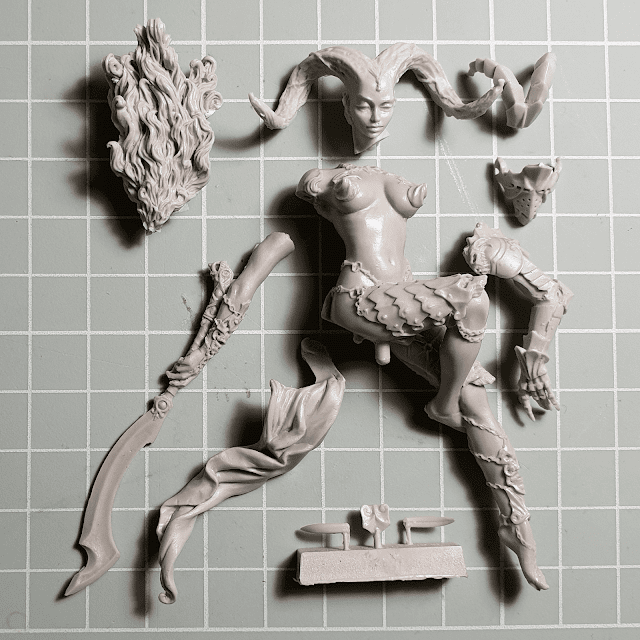 In total this figure comes in nineteen (yes... 19) parts so I've split them down into sections.

Above you can see the nine which makes the main body of Ishtar, plus the two optional parts. Those being an armoured mask and horns for the mask.

Lots of bare skin to paint and some token armour to give you a different material to paint. 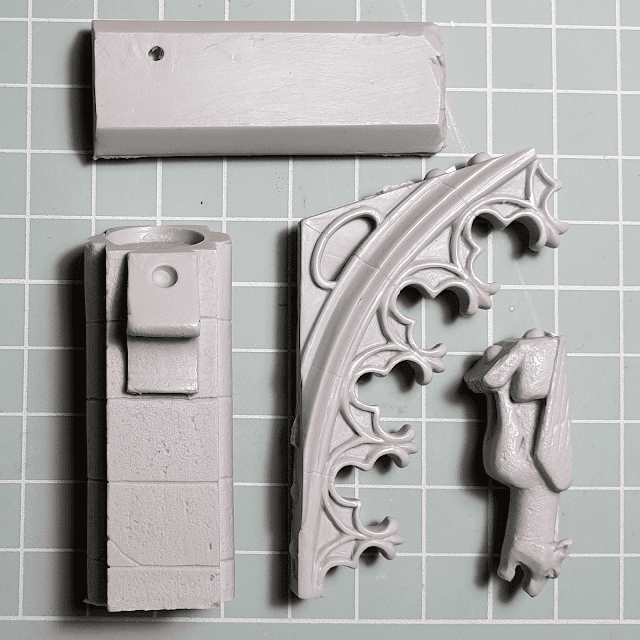 Here you have the four parts which make up the stand. Especially good for those with less of an interest in base making.

Certainly has a Gothic feel to it. 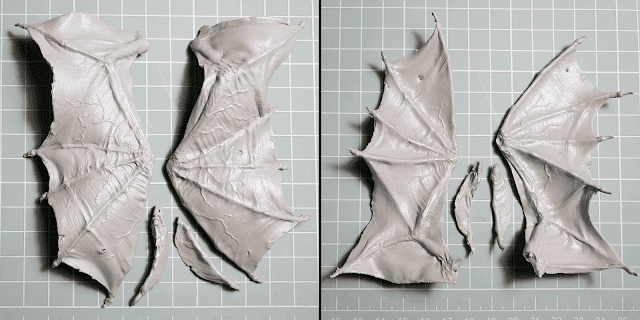 And lastly; Ishtar's large leathery wings which really have some great surface detail and feel stretched out and menacing.

A good solid plinth or base will be needed with how top heavy the sculpt is.

The head seems a good place to start, seeing how it is usually the main focal point for many miniatures.

Her horns are a strange mix. They look almost like they're some old grown plant than the usual bone looking horns usually sculpted on daemonic miniatures. Not a style I've seen before but also works well here.

The angle of the neck feels a little odd but I can't quite put my finger on why. That thought did go when she was assembled though but I felt I'd mention it in case you think similar when looking at the photos above.

Face wise; not the most expressive or emotive but sometimes sculpts are a little too detailed. Plus with all the surrounding detail from the armour and horns I reckon keeping it more simple was a good call.

The hair section is really well cut and fits into place perfectly. Matching up with the back of the head (between the horns) and her right shoulder.

Mould line runs along the front and was easily accessible to scrape off.

The sculpting is really good as the hair has a nice natural feel to it. Overlapping and curling in places. Something often neglected in digital sculpts. 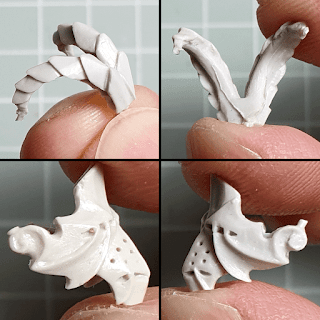 Here are the two optional parts.

Not sure on using these as they cover some of that lovely hair and cast a bit of shadow on her face. But that is obviously personal taste. 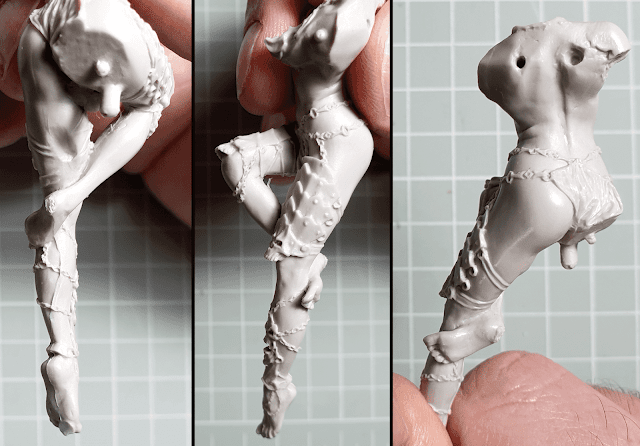 Mould cuts across this kit have been mostly kept to areas which are either unseen or in areas which would only be spotted by looking from many odd angles. That's not to say this doesn't need cleaning and prep work. It's rare to find any kit like that. But mould lines are pretty easy to access and remove for the most part.

The main questionable part of the casting I find is under the toes on her right foot. If, like me, you are pretty fussy about having the sculptors work reproduced as close as possible. Finding a pour hole or vent in the back of the toes possibly wasn't the best as you need to try and re-sculpt the detail. Not the easiest thing to do.

The pegs under her bum may look a bit odd. The large one is actually excess to remove and the smaller matches up with a hole in the stand.

But what you do have here is great attention to anatomy, armour design (when it's just there for show/ intimidation rather than actual protection), and some nice little details like the chains which remind me more of jewellery rather than just being there for functionality. 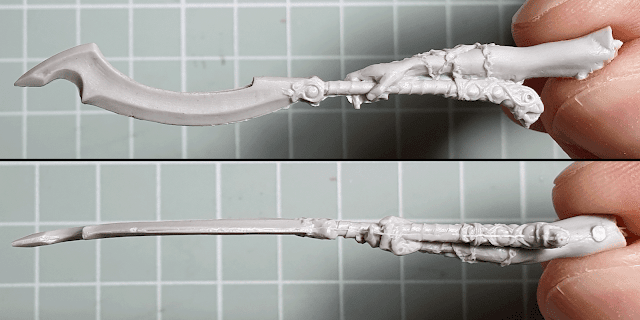 Interesting weapon design and I can't spot a definite influence for it, but it screams fantasy. Bit of a shame about the line cutting through the details on the underside so much. Again though, that side is largely unseen so usual clean up is fine.

The blade does have a curve and the hot water method fixes that. 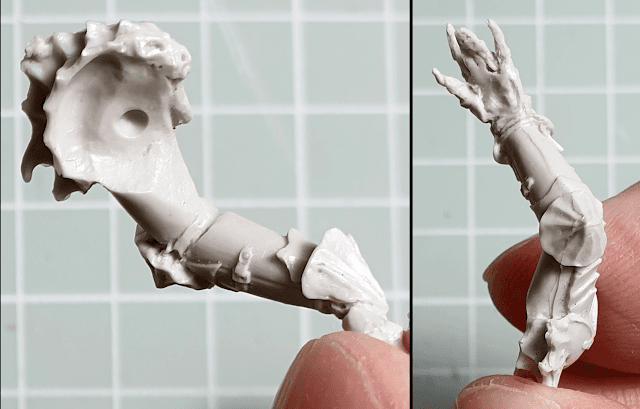 The cut on her left arm is pretty impressive considering this is a traditional sculpt. As a fact, all the parts on this figure fit together pretty near perfectly after clean up which is really a sign of a great sculptor.

Again, another mould line to see. Go easy when cleaning this arm up. I managed to snap her pinky finger and I'm not the most heavy handed person. Luckily it didn't vanish into the void or carpet monster. Some super glue gel and then some liquid superglue to cover the join and it is back in place. Glad the hand is positioned close into her body.

This is actually her most armoured body part too so I'm guessing she was designed as being right handed. Silly observation I know. Just wanted to show the area to clean up on the long loin cloth which fits into position really cleverly too. This almost slots into position. Curving around where the body connects to the stand.

There is also three tiny parts attached to a chunk of resin. Took me a while to work out where they are for by looking at the box art photos. The middle one attaches to the elbow joint of the left arm which is cool. Casting that in place would likely cause issues.

Those long tongue looking parts actually attach under the skulls on her knees. I left them of for this review and I'm unsure if I prefer it with or without them.

Each of her large wings interestingly comes in two parts. A small section (the small photos) attaches to the top where the finger like bone parts join up.

One has a section of bone looking armour which is different.

The section that actually contacts the main wing may not look like the best join in the world, but they sit in place spot on. Gluing those was just too simple which was a pleasant surprise as I was expecting issues when first spotting them.

As you can see there was a fair amount of clean up needed along the top and bottom edges where mould lines were. Not the cleanest cast edge wise but the detail on the membrane is lovely.

Where they attach to the body is again and excellent match up. However; and this is where digital sculpting often trumps traditional, I do wish the keys were a bit more substantial for a stronger hold. I will likely add a couple of pins to each. Lucky these aren't metal wings. 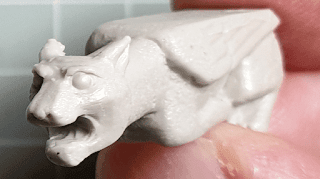 And finally, we reach the stand.

Looking like a section from some Gothic cathedral, complete with gargoyle for her to pose upon.

I almost wish that the gargoyle was a bit more detailed and monstrous, though that could pull attention from Ishtar. 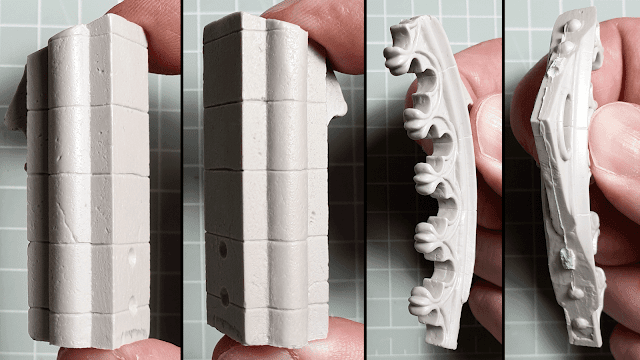 Surface texture is excellent and will likely be a joy to go at with drybrushing (yes... drybrushing. And no, a kitten didn't just die because I suggested it). Mould lines are minimal or hidden so it was quick and easy to assemble.

I did sand the bottom as it was slightly curved inwards due to the way resin shrinks a little. Also added a 2mm thick brass rod for extra strength in the join to the plinth. 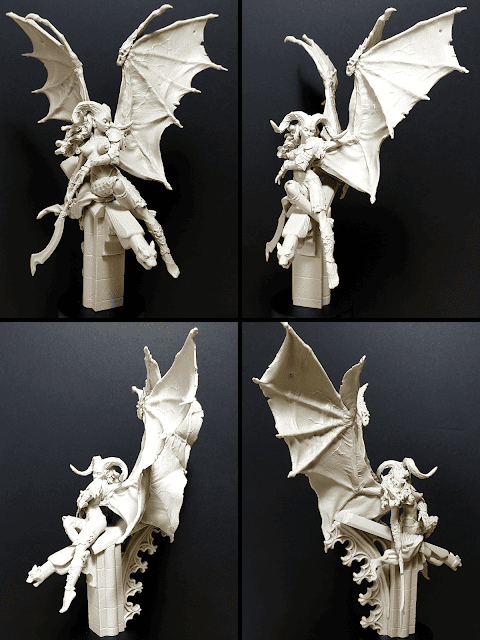 I'll be honest in the fact that I'm not usually interested in the more pin up style miniatures on the market. Many I feel are just there to pull the hormone cash. But I do like daemons and movie monsters so while this does have the bikini armour that I often find fairly ridiculous (especially when combined with forced sexualised poses and inflated silicone enhanced breasts and bums... you know what brand I mean). This sculpt does work for me as a potential painting project.

I put a lot of that down to the anatomy and the way parts interact with each other which shows the talent of Andrea Jula. The flowing cloth following the angle of her hair and giving a hint of blowing wind (stop giggling), and the way her right wing and legs give way to the solid stone of the building gives her a softness that flesh has.

Even though she is armed and has some armour (those daemons do love non protective show armour), she looks calm and peaceful... for the time being. Perhaps she is looking for her prey before swooping down. 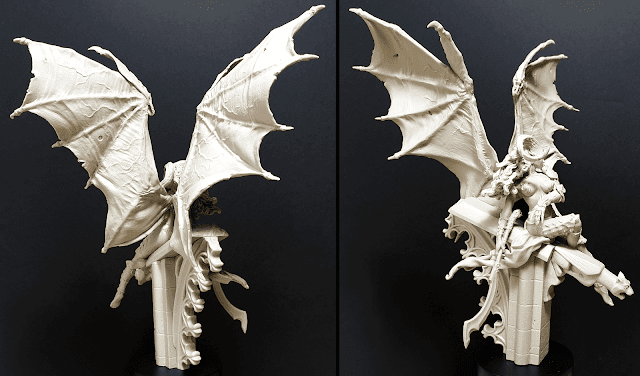 I do actually have an idea for painting her and it's perhaps a shame that I don't airbrush as it might make the effect easier. But still, she's on the project list.

Ishtar is still available direct from Kimera Models at https://www.pegasoworld.com/product/ishtar/ for 69.54€ (including tax), which may seem high but this is a pretty substantial figure. That's around £58 in the UK currently.

Thank you for getting this far. Stay safe. Enjoy you hobby. Don't buy recasts and as Norm says... don't drink your painting water (though don't panic if you wash your brush in your tea or coffee).
Written by Steve Haydon (Forté) on Monday, April 27, 2020
Email ThisBlogThis!Share to TwitterShare to FacebookShare to Pinterest
Labels: 1/24 scale, 75mm, Andrea Jula, Kimera Models