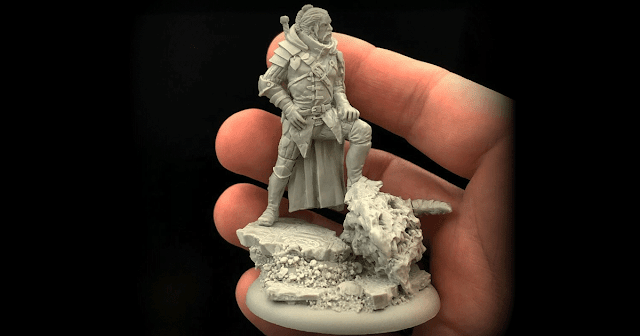 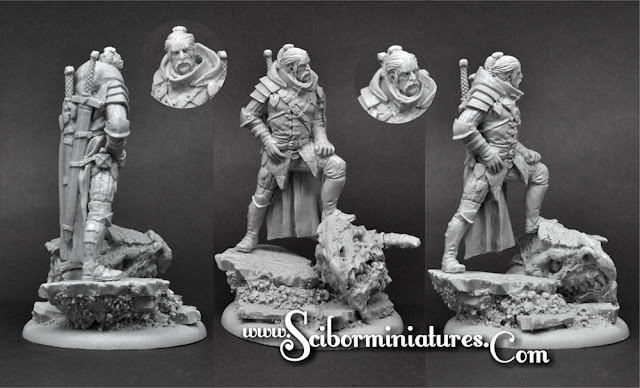 This week I am taking a look into a scale I don’t often dabble and that is 54mm or 1/32nd scale.

I think in my time in the hobby I may have painted two 54mm sized miniatures but I think I may be looking for more as my eyesight gets old and wrinkly like my face...


Scibor Monstrous Miniatures has been on my radar for many years since I was introduced to display miniatures by the guys on WAMP forum many moons ago.

In fact my 2nd ever bust was from Scibor and it was a Dwarf Pilot, pretty cool bust actually.

So in recent times Scibor has been putting some very cool offers on his range and I took another leap into 54mm with his Wyvern Slayer model.

When I saw this I thought it was 75m and thought yeah that is really nice piece and then realised it was 54mm.

Ok before I carry on I want to mention the postal issues caused by COVID-19. Scibor posted out my order but due to the restrictions his parcels were returned and he had to send them by courier instead which he emailed me and informed me he would be covering the cost and he added an extra miniature to compensate for the postal issue. I did offer to pay any extra but Scibor did not take my offer and promptly reposted my parcel. This is an amazing gesture considering the postal issues were not his fault... so thanks Scibor much respect...

So what do you get in this kit? 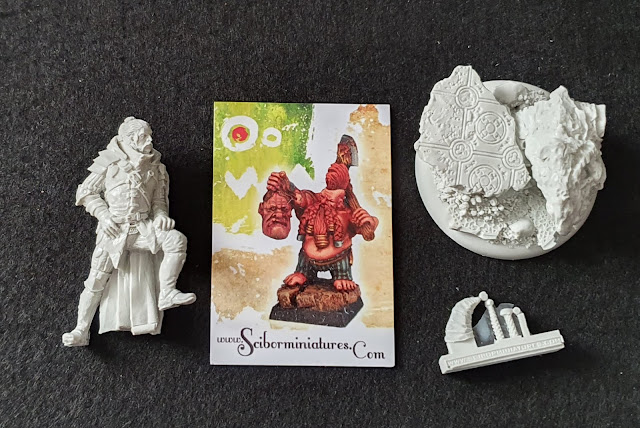 The Wyvern Slayer comes in grey resin and comprises of 5 parts; the main body, the scenic base, two sword grips and a bit of Wyvern horn.

The casting is pretty good, there was a bit of flash in a few places and there are some fine mould lines up the inside of the legs and cloak and also up the outside of the boots too.

This will only take a matter of minutes to remove and buff back and get ready for paint. 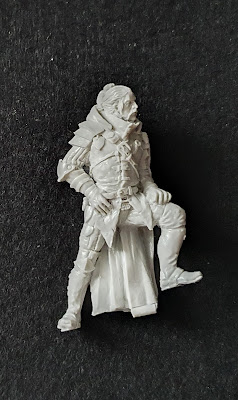 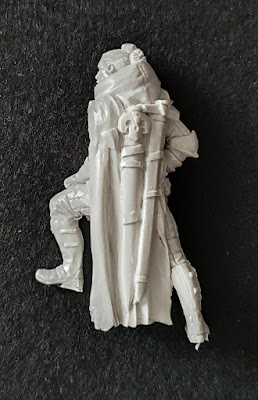 The main body is almost cast in one part but the sword handles have been cast separately and to avoid bubbles. There are some small discs on the end to pull any bubbles away from the pommels which is cool and I am sure has saved many of cast from failing. The horn is also cast in this mould to reduce the amount of moulds needed. 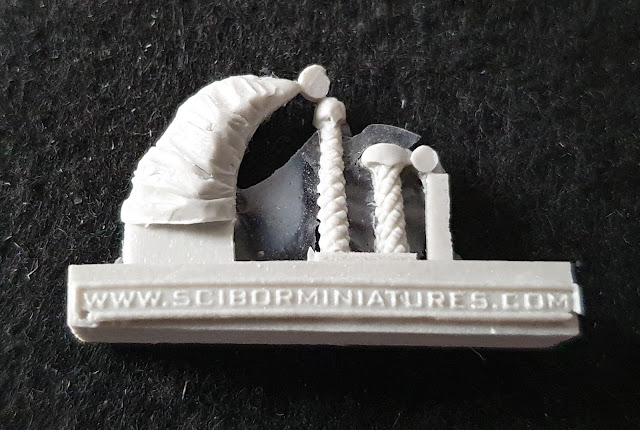 3D sculpting is pretty damn good these days but a traditional sculpt will always have something about it that just wins me over.

The theme of the Wyvern Slayer caught my eye because it originally seemed to be a Captain Ahab type miniature and I imagined him stood on the bow of a ship looking out for his Moby Dick.

But to find he was a dragon slayer was pretty cool.

He has a gnarly scar on the left side of his face from a bit of a close shave with a claw and a very hipster topknot so match his 1970's moustache, very retro indeed.

You could definitely imagine him in the Witcher or Skyrim and a paint job of mainly leather will suit him perfectly as he will need that layer of protection for fighting those crazy scaly fiends.

He is armed with two long swords and has shoulder and elbow armour to add to his defence.

His proud stance over his vanquished foe adds to the overall aesthetic to this miniature and it really did get that line of thought from my first look at it. 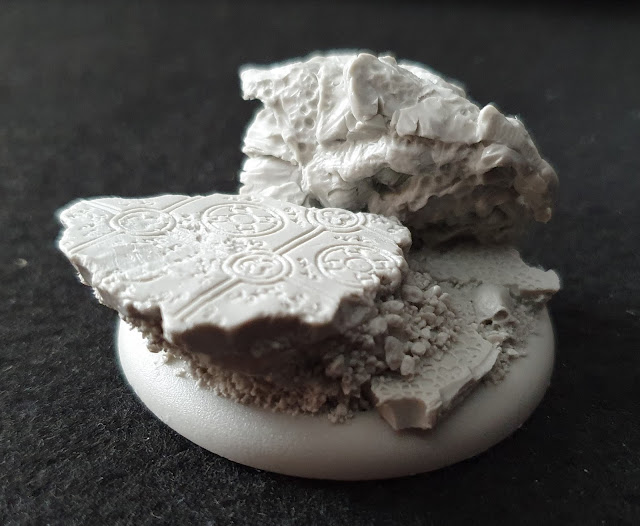 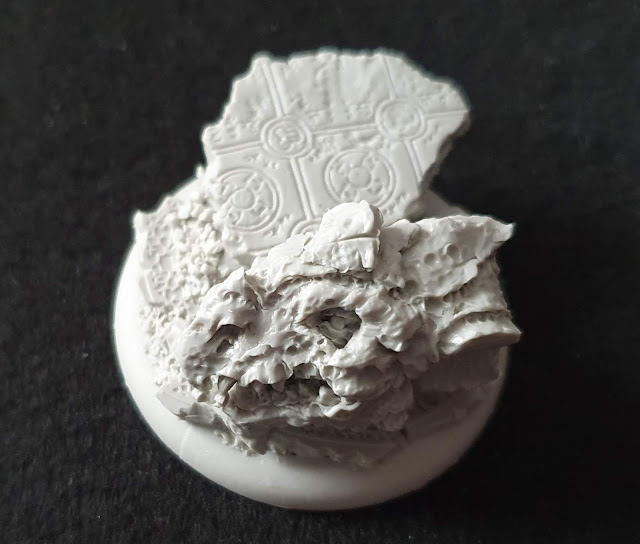 As mentioned before a scenic base is supplied in the kit and it has the Wyverns head on it which looks like it crashed through the floor once it hit the ground. If you turn the base around you see the spine and surrounding flesh and the oesophagus for the extra details. 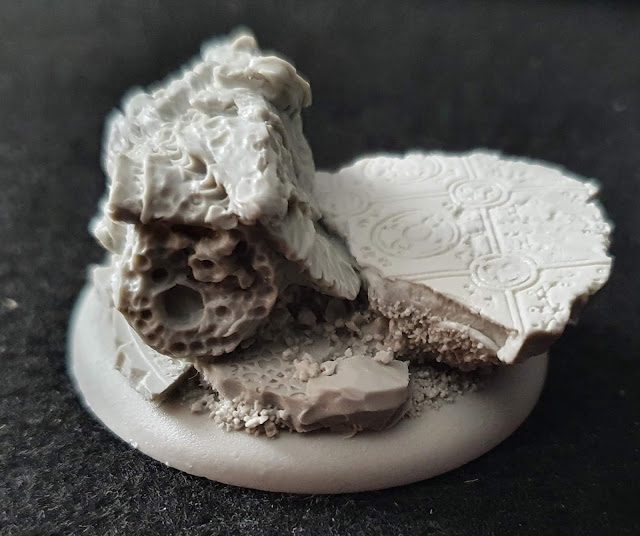 If you wish you can drill out the oesophagus to create a deeper cavity and have blood pouring out onto the ground.

The base is on a gaming style 50mm base if you don’t want the round lipped base look you can easily chop away the edges and put the base on a plinth with some extra basing materials to give it that display base aesthetic.

I usually try to find negatives in casts but aside from a couple of mould lines there is not a great deal wrong with this kit, I am happy to say I am pleased with this miniature and I am glad Scibor dangled the carrot for me via his advert on Facebook and I am now looking at a couple of other pieces from the Scibor Monstrous Miniatures range.

If you like what you have read please go visit Scibor at www.sciborminiatures.com

Scibor has 54mm sized miniature as well as a few 75mm and his range of 28mm miniatures is pretty cool too.

So head over and check out his site and happy spending...

Thank you for reading and let us know if you decide to purchase anything from Scibor we would love to hear your thoughts too.