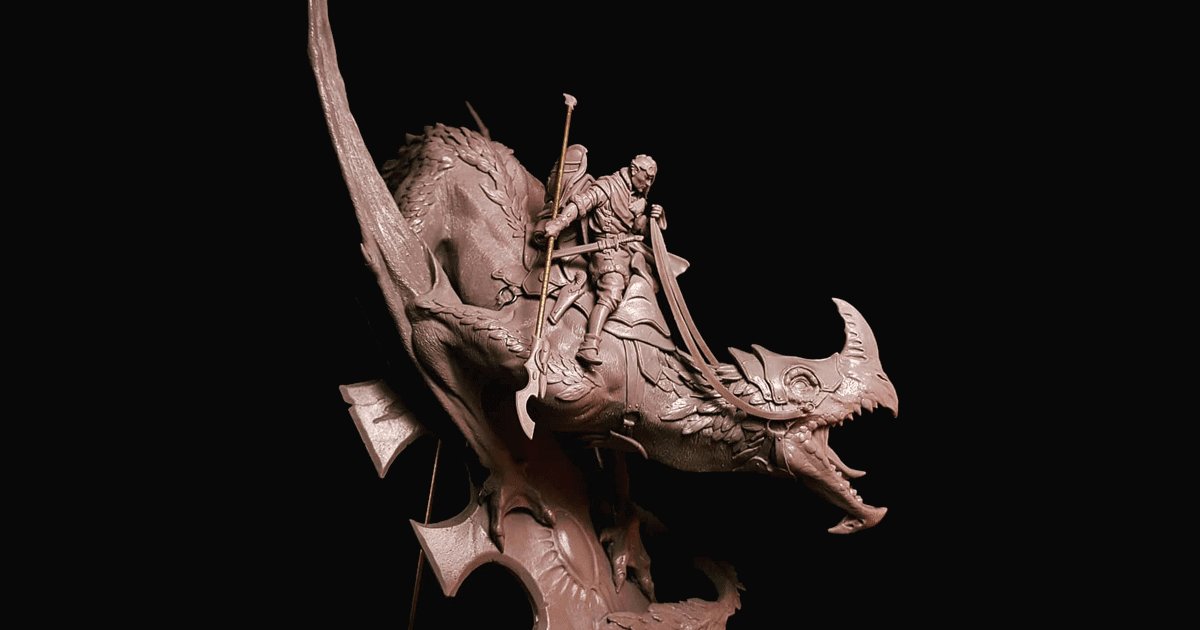 In this wonderfully diverse world we call a hobby we have almost certainly started our days playing DnD and Warhammer or painted soldiers or built model kits, but one thing is for sure we have all ended our journey in the world of figure painting.

I am sure, like most that our journey was influenced by fantasy and Sci-Fi genres.

My journey saw me gravitate to wood elves and space wolves as my 2 chosen armies in the Warhammer worlds and these choices have in turn influenced my journey into the display painting world.

When I was shown the concept art for the kit I am reviewing I was quite happy with the direction it headed in.

I must say though that being part of a group that tried to help shape the final product was a task and a half due to the racing mind of the owner of Dragonhead Models, Jamie Hutber.

However, the end product finally was sent over to Joaquin Palacios to sculpt and this review takes a look at how Elwin Luthias & Rymmaig turned out.

So let’s delve into the box and check out the quite sizeable 54mm kit.

This kit comes in nice quality grey resin and has a total of 22 parts and is shipped in a nice plain box printed with the Dragonhead Models logo packed with wood shavings which compliment the colour of the brown box. 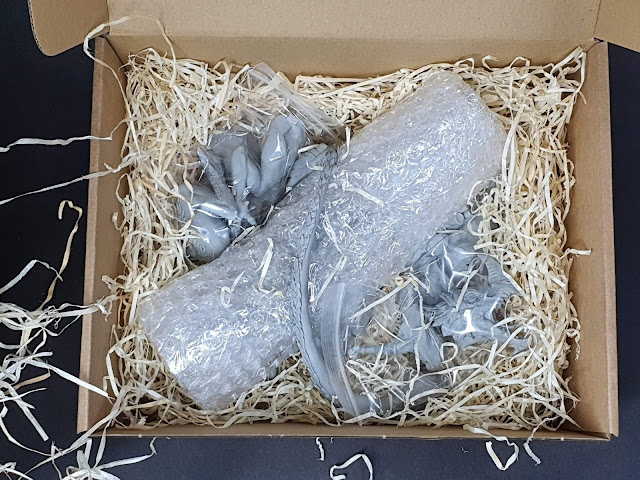 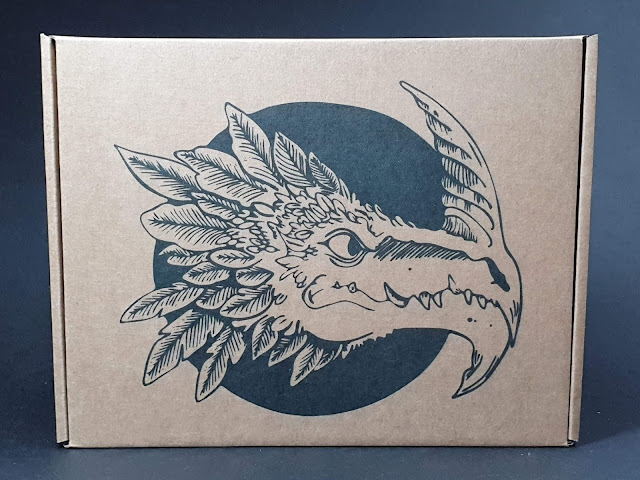 There is also a parts list which to my knowledge no one else does apart from armour and aircraft manufacturers. 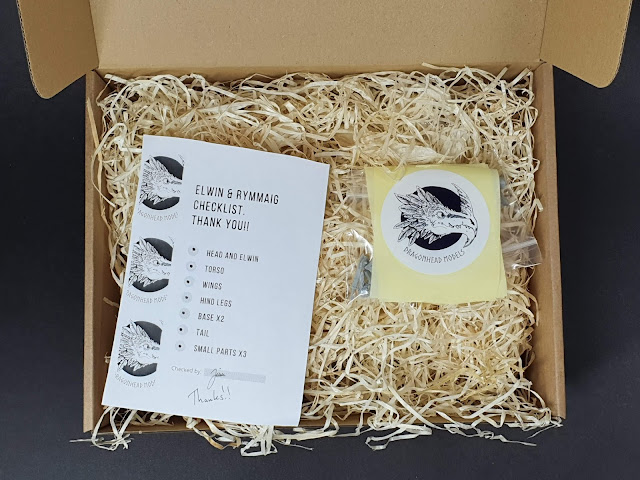 Aesthetically speaking it is a nice looking product.

As you know I often go looking for the negatives so let’s point those out and see if Dragonhead Models can withstand the scrutiny of Normski.

Mould lines are a part of casting, some companies are insanely poor at casting and I have seen some recently that I personally would send back to the caster and have them re-done but thankfully Ciprian Negut has done Jamie what seems like a solid casting service.

The copy I received was sent pre packaging so for this review the images of the box are stock images... but I digress...

When inspecting the casts straight out the zippy bags I could see Joaquin had done a nice job of the sculpting so this wasn’t an issue so I went looking for those dreaded mould lines.

I am happy to say I can count on one hand the amount I found.

Surprisingly enough these mould lines were quite fine and will require a small amount of prep.

The rider has a line on his cloak, the dragon tail has one along the length of it and the torso of the dragon has a small mould line underneath on the saddle and ironically there is one on the dragons head.

Palacios and Negut production, bang on...

The details are really nice and unlike some sculptures I have seen lately the feathers look like feathers... 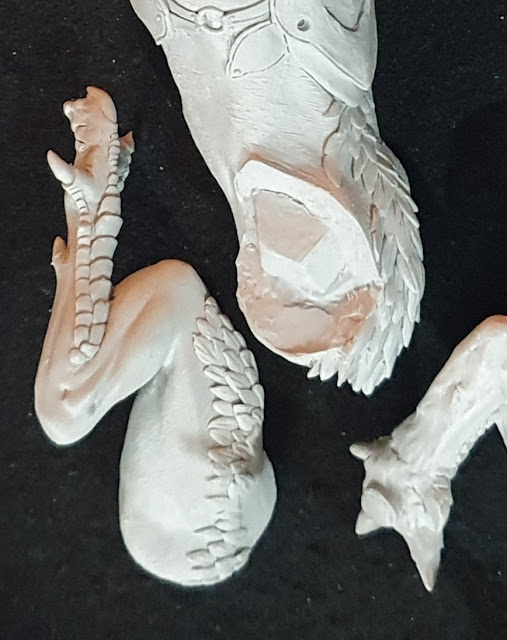 This dragon is a forest dragon so has characteristics of a bird and Wyvern.

In fact it looks like a Wyvern had a bit of ding dong with an Eagle Dragon.

I came to this conclusion because of the beak and feathers and front claws coming from the Eagle and the hard leathery skin with hard scales in places and a horned nose accompanying the winged front legs coming from the Wyvern, but I will let you ponder over its actual heritage and it would be nice to read your thoughts on this matter. 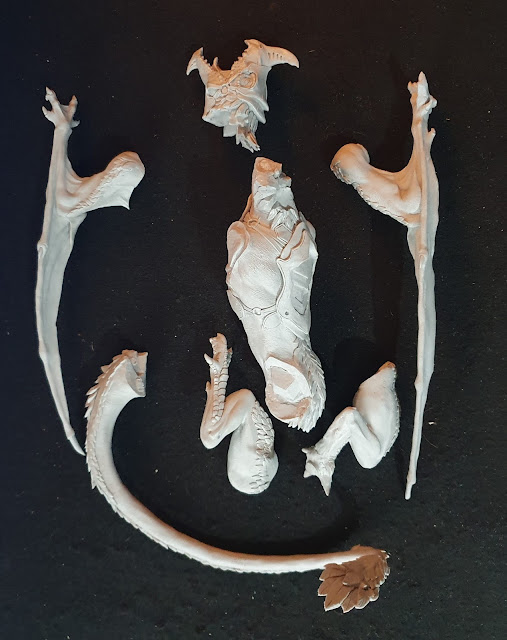 The pose is quite nice; it can either be on over-watch or about to launch...

The rider echoes either stance and is looking alert...

Elwin sit aloft the dragon on a flying saddle which looks tough and robust and suits the Elven feel of the dragon. 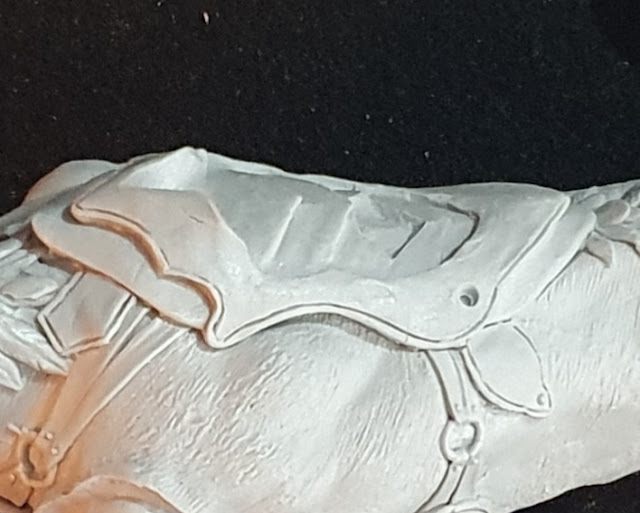 I must say though the saddle has ridges the point backwards..

If this dragon comes to an abrupt stop the rider is in for a very bumpy painful experience kind of like sliding down a Klingons forehead with no pants on....

Joaquin Palacios has put his mark on this piece and you can tell by the shape of the elf’s face it’s a Palacios sculpt as his Elven sculpts all echo each other. 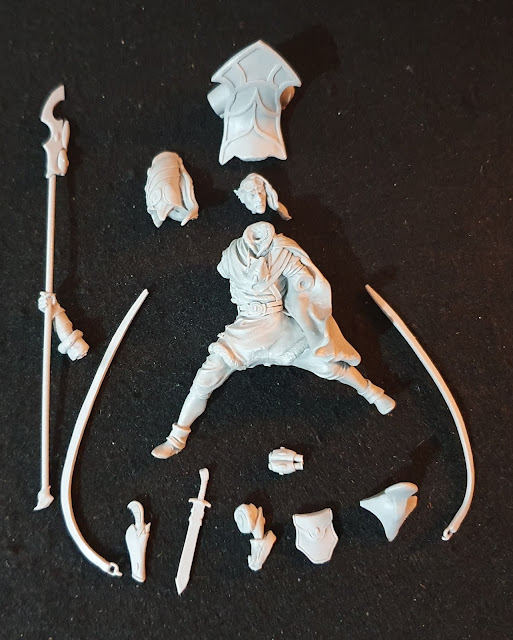 All the small parts on this kit are cast immaculately and amongst them is a helmet for engaging in battle, some satchels and a couple of weapons as well as a power lance.

The genre of this piece is set in the Sci-Fi world as the kit includes Eldar like parts but you could easily swap out the parts to make this a fantasy kit.

You can tell Jamie is influenced by the Games Workshop aesthetic due to the base the dragon is posed on.

This base just screams Eldar... 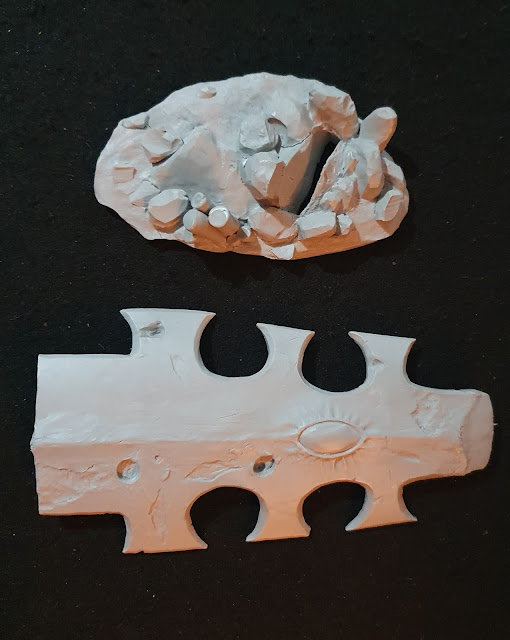 I like how the dragon is completely separate from the base giving you the choice to make your own diorama or base to suit whatever direction you go in with the paint job and scheme.

I have deliberated over this for a while and I can say GW have had many of their images copied or have closely influenced others art and if you Google sci-fi elves you will see within just a few images Eldar pictures pop up. All the images show lank and lithe characters with tight flamboyant armour or costumes and some kind of pulsing weapon.

So as Jamie is very much influenced by GW his aim was to have that aesthetic in his sculpts.

I have said many times to Jamie to stay as far away from GW IP as possible and he has achieved it with this kit.

After all how many times can you re-invent the wheel as long as you don’t totally rip off GW Intellectual Property in the process.

So far, for this release he has kept the GW influence to a minimum and let’s hope he stays away from it for good.

Jamie is trying to create his own world and narrative for his range so let’s hope we see some very fine miniatures in the future.

This kit comes in at £109.00 and for a 54mm sized dragon and rider I feel he has released a bargain.

I know of several 28mm dragons out there that hit £200-£300 so this kit has to be a bargain and hopefully Dragonhead Models will come up with some epic minis at affordable prices in the future.

I did tell Jamie I was gonna give him rock all in this review but I genuinely couldn't find any major flaws with this kit.

So well done Jamie on your release and let’s hope you keep the quality in the forefront in all you do in the future.

If you would like a copy of this kit head over to www.dragonheadmodels.com, this kit is worth a purchase for sure.

I hope you enjoyed the read and please get involved in the comments if you have any comments or would like me to clarify anything?

Thanks for reading GreyMountain Reviews and remember, Don’t drink ya paint water.
Written by Normski on Monday, May 04, 2020
Email ThisBlogThis!Share to TwitterShare to FacebookShare to Pinterest
Labels: 1/32 scale, 54mm, Dragonhead