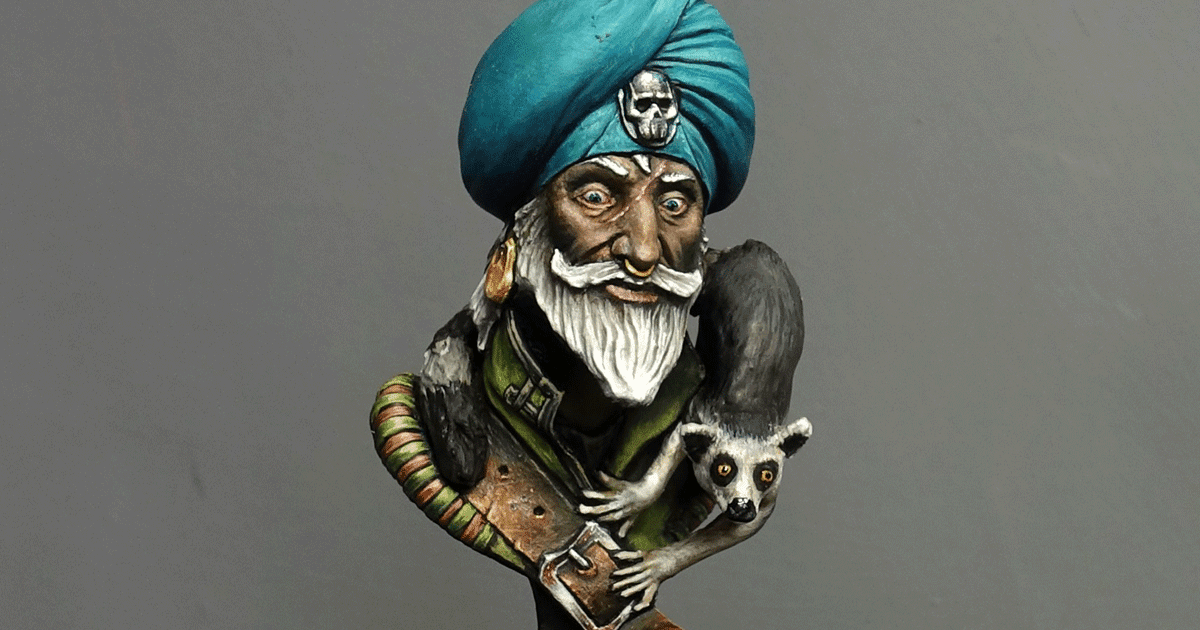 Back in August 2019 I had the joy to check out a previous Abyssoul figure in the form of Zensh-Iku which Impressed me quite a fair bit. Much of it due to to original style of the design.

Fast forward to May 2020 and I find myself looking over a newly released (finally) mini bust going by the name of Jahb 'I Kalehm. The most appreciated trader in Nerei, according to the little story on the shop page. 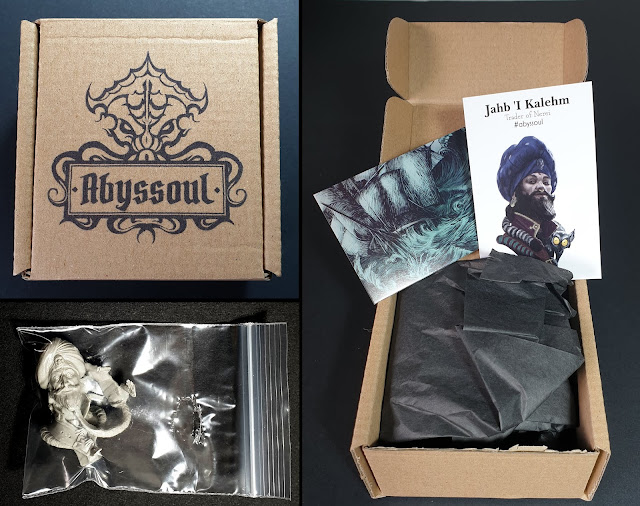 First thing I noticed when I opened my shipping packet was the change in packaging design. Gone is the old black box with string and wax seal, and say hello to the new printed brown cardboard box. Though I do miss the wax seal.

There is something different printed on most facings of the box but I'll let you see that when you buy something from them. But the art used really fits the setting that is being built up.

Two cards greeted me. The concept art card also has a message from Fausto (Abyssoul's owner) which I believe he does for every order as I've seen a few others on social media. Nice personal touch.

The old filler was like straw so the new black paper feels more fancy. No chocolates were found though which if you know Fausto then you may have seen photos of his sweet, non-resin creations. One day I'll taste something. 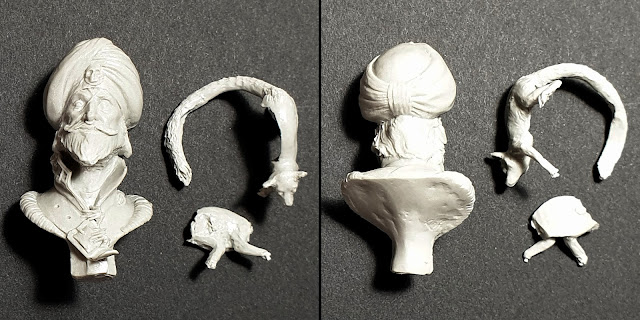 Mirko Failoni is behind the concept art and has designed quite a few others in the range too.

Sculpting wise; as it features a hairy critter in the form of a lemur, I'm sure you wont be surprised this was done by Peder Bertholdy. Seems he is really getting around and sculpting more animal based miniatures all the time.

I'm unsure who the caster is his time around. I do remember Fausto saying he was looking to use someone more local to him and to give a lesser known caster some work. Always good to try and grow the community in ways like that and there is certainly a shortage of high quality casters.

Details look to be reproduced excellently and the resin feels good too. A little shiny perhaps but the traditional soapy scrub usually deals with any mould release issues. Though it doesn't feel greasy at all which is a good thing.

Slight mould lines running up the sides of the neck but nothing that a quick scrape and sand couldn't cope with and otherwise very little to do on this main section to be honest. 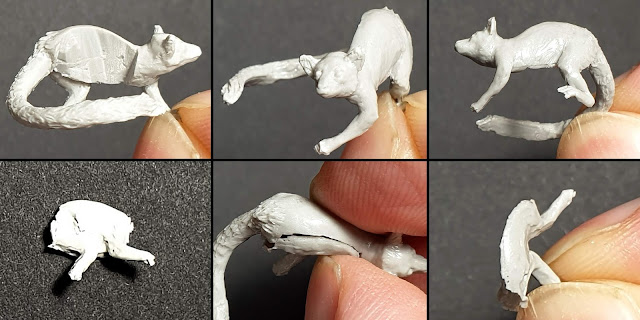 As for the furry beast (lemur, not Normski); this is where the clean up was needed and I should've done a bit more fitting and cleaning before gluing. Rookie error... oops.

The main section has a mould line running along the belly and a little nub to clean on the tail. The was pretty simple. The join to the smaller part needed a bit of trimming. And that was where I rushed a bit. If I did a tiny bit more sanding I would've got a closer fit which may have resulted in easier placement on his shoulders as there are the four legs to line up plus the collar touching the inner side.

So as a rule... always spend that bit longer on your miniature prep work for a better result.

But otherwise, that lemur looks lovely. 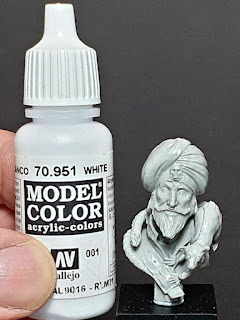 As I said before. This is a mini bust. Just 40mm in height (less than 2 inches). Feels tiny as a bust but may feel large if you're more used to gaming scales.

Certainly has that old pirate trader feel to it.

Now then... getting that lemur into place properly was tricky (and yes, I know. Should've gap filled too. I still can). Ended up using a toothpick to apply some gel superglue onto the main body where the legs touch. Letting that dry and then using a hairdryer to warm it and position parts that weren't quite right. Useful to be able to do. 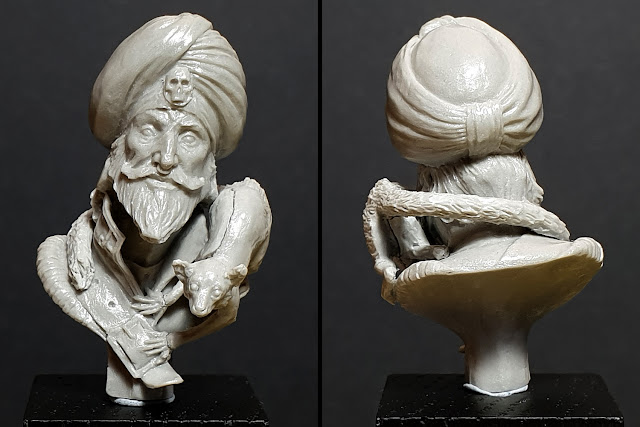 I like this little character. Feels like the sort of trader of exotic artefacts that you always come across when playing fantasy role playing games. Guaranteed to have the exact things you need at a price which would empty your purse every time.

There's no doubting that you have different textures and materials to play with. From dark and well worn leather to a bright and colourful turban. Rich metals and of course lemur fur and big eyes (have never painted one of those before).

I do feel that perhaps having the tail as a separate part could make painting more accessible and assembly a little easier. But either way, it's something different in a market filled with warriors and adventures. All who need to by their resources from somewhere after all. 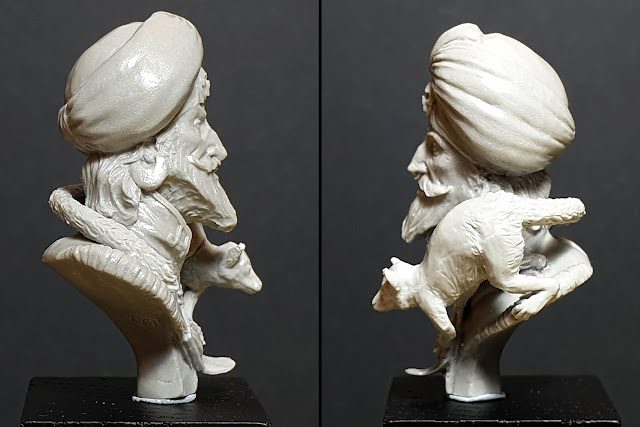 Jahb 'I Kalehm is available direct from Abyssoul at https://www.abyssoul.com/jahb-i-kalem for just 17.50€ (around £15) which is pretty good for the detail and character.

Make sure to check out their Facebook page and Instagram to see more of their products and keep up to date with future releases as they have some great designs to come.

Thank you for getting to this point too and I hope this has been helpful to you. Take care and I hope your brushes behave.
Written by Steve Haydon (Forté) on Monday, May 25, 2020
Email ThisBlogThis!Share to TwitterShare to FacebookShare to Pinterest
Labels: Abyssoul, Bust