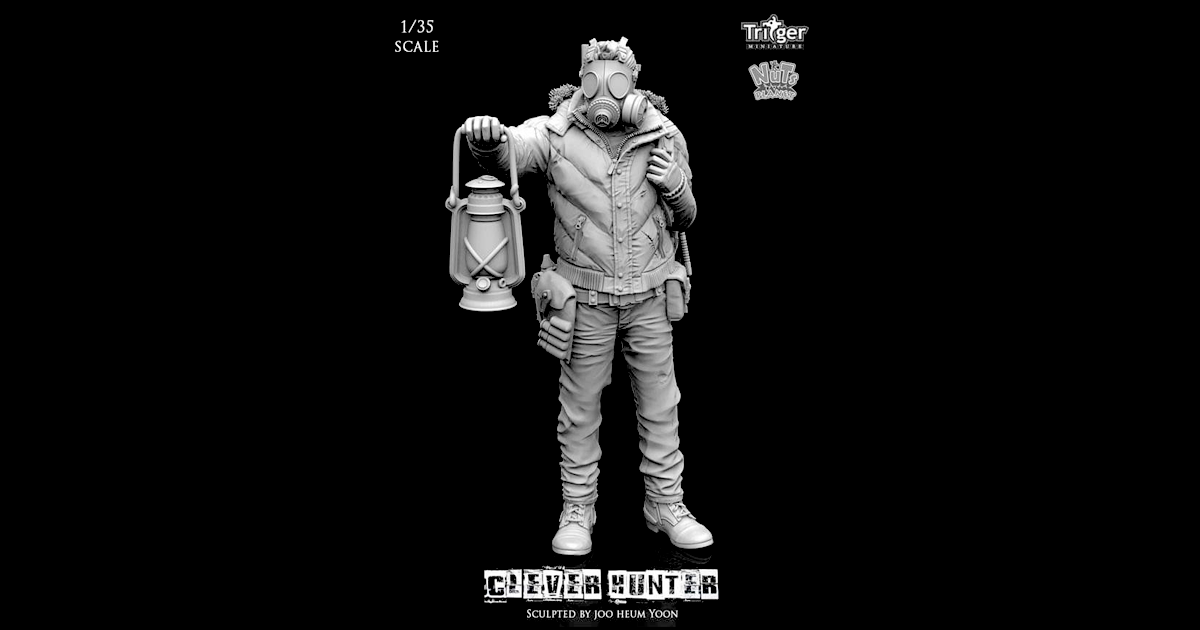 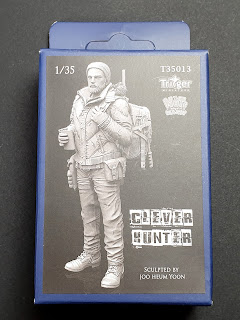 NutsPlanet is no stranger to us here at GMR with Normski previously reviewing Freshman Lily in 1/24th scale and the 120mm scale Lucy Russian Sniper figures.
I've seen NutsPlanet for quite a few years now and they've always looked high quality. This is the first I've had in hand though. Not sure why it's taken me this long. Possibly because choosing from such a large and constantly growing company is difficult. I've heard nothing but good things though so I've been looking forward to this.
The Trigger range is primarily figures but covers from 1/35th (close to 50mm) up to 1/12th (around 150mm), and in a post apocalyptic setting.
Clever Hunter is available in 1/24th scale and more recently 1/35th scale which is much more diorama friendly. Though the photos I'd seen don't show any difference in detail quality (but it is the same digital sculpt after all).
Sculpting here has been done by Joo Heum Yoon as is the case for the majority of the Trigger range.

All parts were held in a single zip lock bag so nothing ground breaking but dose the job. Nothing wrong with that at all and pretty standard for smaller scale miniatures.
Seven parts in total but you'll only use four or five as you have two optional builds here.
Though using the lantern in some way with both builds would give some chance to play with object source lighting (OSL) and directional lighting. Could set up some good atmospherics.

Looking closely at the heads you can see that while the casting and edges of details look a bit soft, you can still see exactly what the different details are. This is more something I find with smaller digital sculpts quite often so nothing unexpected.
Pour points are in locations that are easy to remove and clean, and the hat variant has the excess where it joins the body anyway to just cut and connect. Didn't manage to find any mould line which is impressive and something I had been told about NutsPlanet quality. 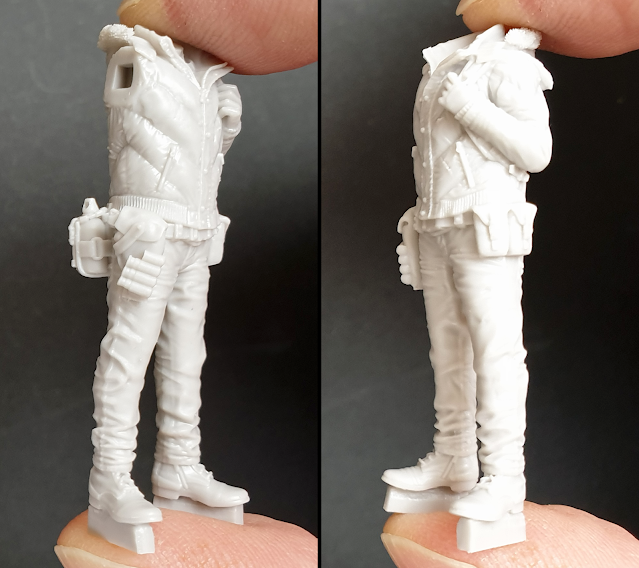 As for the body; lots going one here. Plenty of pouches for all that gear he likely has on him to make survival that bit easier.
Then you have materials and surface details. These are really well designed and reproduced nicely in such a small size. Folds in his trousers look realistic to me and the sculptor remembered to put in seams, pockets, and a zip cover too.
The coat is excellent. Really has a padded feel to it. Although the fur does feel a little spiky. 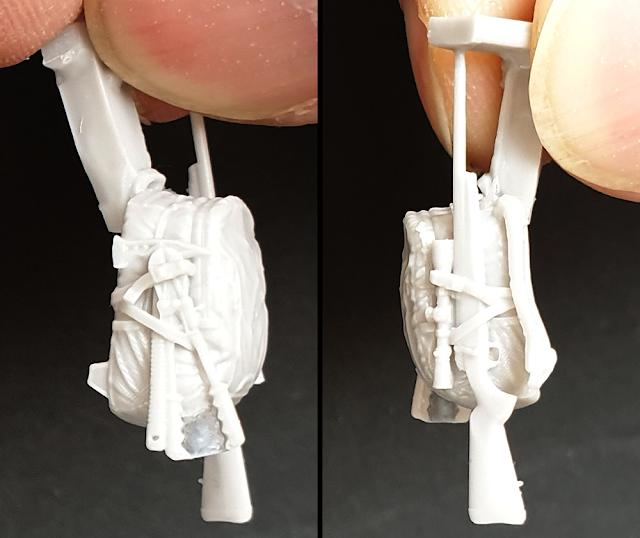 His backpack looks pretty full but those external straps are being put to good use. This guy isn't messing around.
The excess resin block here is good as it keeps the rifle nice and straight, plus minimised the chance of that barrel getting snapped in the box. Easy to remove, just take it slow. The join to the body hides the pour point and frankly the design of the join is top quality. 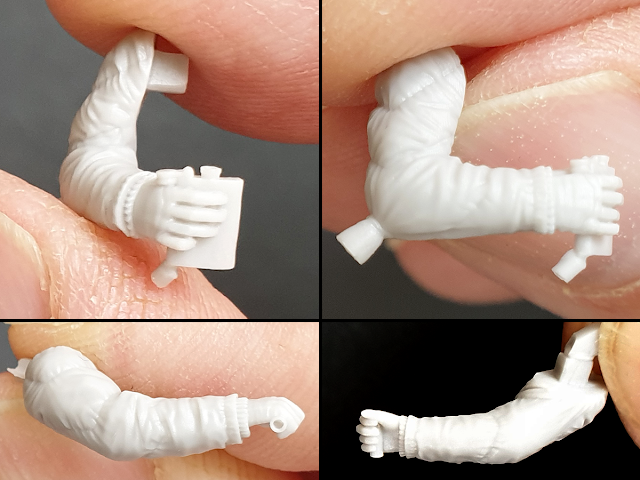 Two optional arms in close up for you here.
Not the best pour points on the drink flask option but I often see those poor elbows being popular places. Trimming and sanding was easy anyway and nothing suffered.
I found a mould line finally... in a hidden place anyway so nothing to get excited about really. Challenge still on.
Tiny holes in the sides on the hand match up perfectly with the lantern so no drilling needed at all. And of course; well reproduced in the resin. 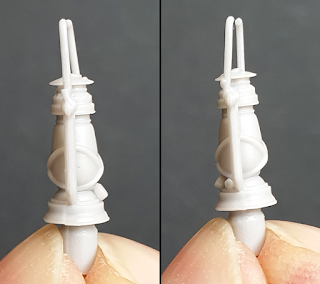 Your OSL option. It's a popular way to paint and this just gives you the best excuse to make the most of the painting method.
Also...YES... a slight imperfection in the casting. NutsPlanet casters are officially human. Being honest though it is about what I expect to find on miniatures this tiny. I've seen bigger mould lines on mass produced plastics from a slightly known company that rhymes with wames gorkshop.
The Joo Heum Yoon obviously looked at reference for his sculpting because this looks spot on for a paraffin lamp. 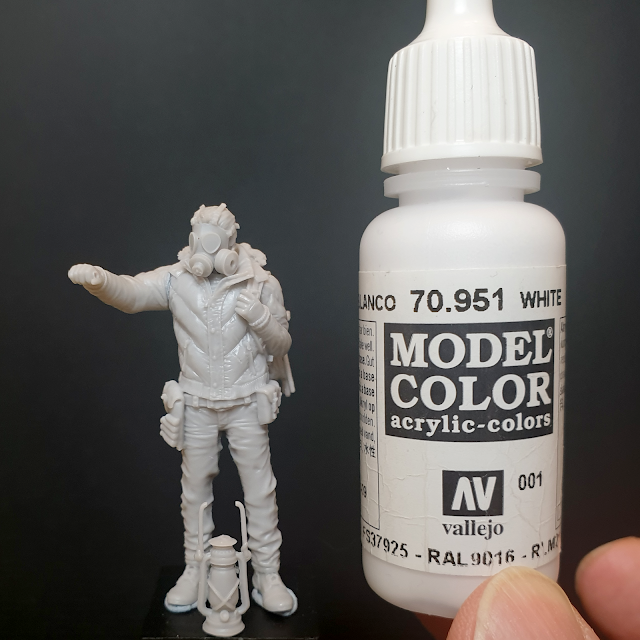 Coming in at around 50mm to the top of the head he feels a little small up against most 54mm scale figures. But this will work better used with more scale model company products where 1/35th is common. And they have plenty of scenic and vehicle kits to be played around with.

As you can see from the assembled photos it's an excellent and characterful figure, especially considering it's size. Yes; for me the standard face suffers from the typical digital sculpting perfect symmetry and lack of any expression so of course I would go for the gas mask version.
I'd definitely be tempted to go down the diorama route with this too. Some desolate place with a ruined and long time abandoned vehicle perhaps. That is where this sort of figure would really shine rather than just being painted with minimal basing and on a plinth I reckon.
As for quality, well... great resin that was really easy to clean up. Joins and cuts are exceptional, as are the pegs for making sure things line up exactly as intended.
I would perhaps like some slightly sharper details but from what I can tell that is more the realm of the larger scales and I'm honestly really fussy (as many people know).
Lastly and this is the cruncher... this is listed on the NutsPlanet site as $18 and on UK sites just £14.40 including VAT. That's cheaper than pretty much any single plastic figure from the most known tabletop game company. Can't really argue with quality at that price.

If you would like to purchase a copy of Clever Hunter or have a browse of their large offering they can be found at http://www.nutsplanet.com and they also have a good list of places to buy from around the World too.
Check out their Facebook page and Instagram if you want to keep up with NutsPlanet information too.
Hope this has been useful and don't drink Norms painting water (seriously... don't do it).
Take care and happy hobbying.

Want to support GMR?
Have a product you would like us to review? Contact us and we'll be happy to talk.
If you would like to Donate to the running of GMR, anything is greatly appreciated.
Written by Steve Haydon (Forté) on Monday, June 29, 2020
Email ThisBlogThis!Share to TwitterShare to FacebookShare to Pinterest
Labels: 1/35 scale, Figure, NutsPlanet, Post Apocalyptic