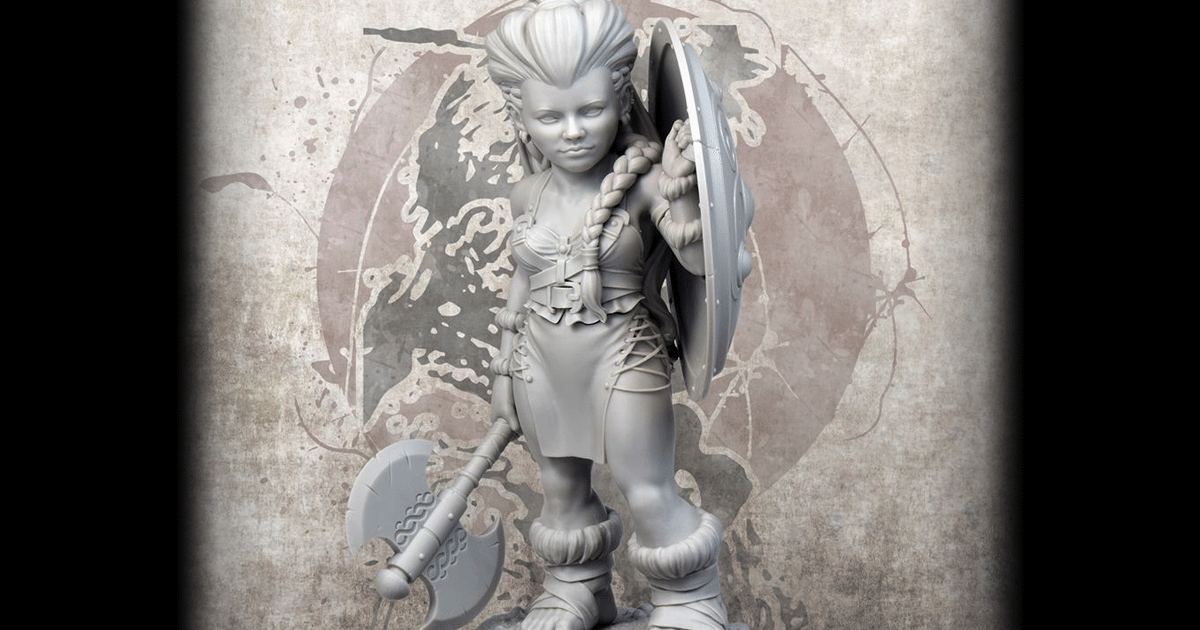 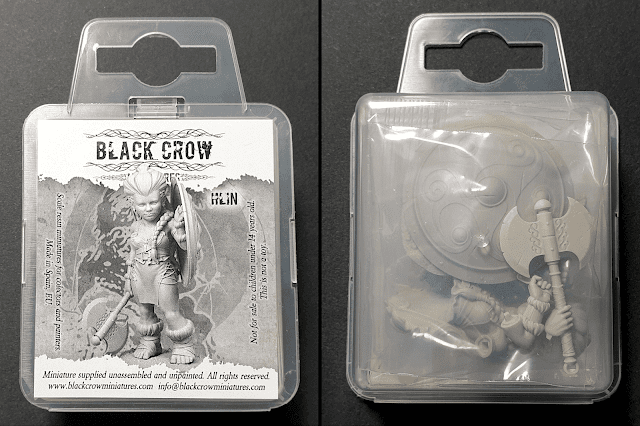 Securely packaged in a popular plastic clamshell box. Bit of a change from the usual larger and fully printed cardboard boxes, but with the size of her this works perfectly.
Simple sticker with no painted box art which I like. I often find myself distracted by amazing box art painting so just seeing a bare unpainted photo works for me. No doubting which company this comes from either with the overall image style. 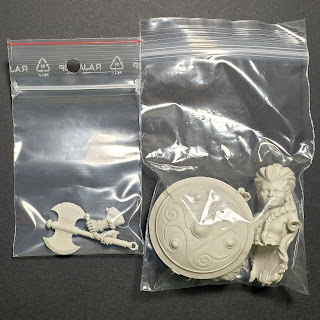 This review should've been with you sooner but frustratingly with COVID-19 going on it took over a month to make it from Spain to the UK.
All parts look good in the two zip lock bags. Nothing separate that looks like it shouldn't be.
But that shield just looks huge. Good luck to anything trying to get past that.

What do you get? 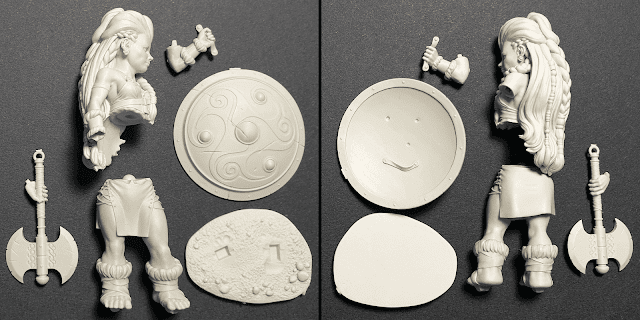 Six parts make up Hiln including a fairly simple base, which I'm expecting to not notice being used too often with how fantasy painters seem to like creating excellent scenes for their figures.
Nothing glaringly worrying in the slightest. A few bits of excess resin to remove and some fine mould lines which you'll see below. Quality frankly looks ace on a quick look. Not surprising with Ciprian being the caster.

Looking over the upper body and head you can see a lot of well defined details and shapes, or volumes as often referred to within painting. This is great as it really helps you decide how to shade and highlight areas. Hair is often an area that people (yes, me) struggle with but here rather than ultra fine strands you have quite obvious sections.
One thing I often find on digital sculpting is that materials often seem to strangely cut into each other rather than curve around. It's something that can really put me off a miniature when a body part looks like it's phased into a section of hair as it stops in one place and appears somewhere again. Isidro looks to have avoided doing that which is excellent. 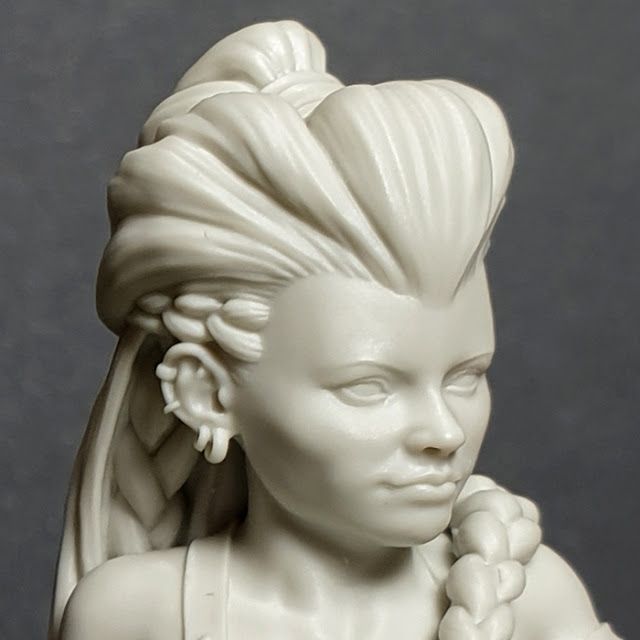 I had to zoom in on that face. Had to. Just absolutely had to.
Someone has really been looking at face shapes and muscles. Just looking at the photo above you can see from the shadows how the face has curves and shapes. Ears are really well designed too.
Then you get some finer details like the shape of the mouth, eyes, thin eyebrows, and multiple ear piercings. It has a feminine feel but also feeling strong. 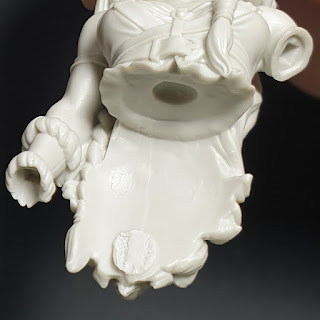 Now to show you the most disgusting and disgraceful pour point and mould line on this whole figure... which even with minimal cleaning you will never see once assembled.
This is really where Ciprian shows what he is good at. Hiding those joins in his moulds to the point that novices shouldn't have much to do to get a high quality result.
Obviously this isn't all down to the caster. The cuts and sockets have been really well designed as you can see, but I'll talk more on that later. 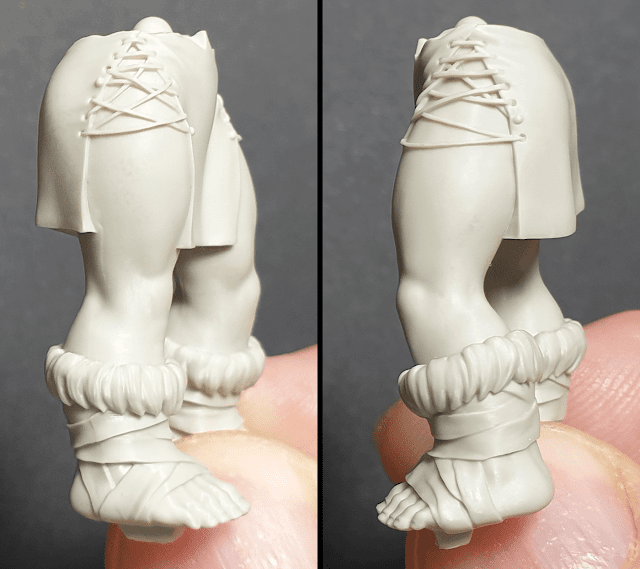 The look of the skirt and footwear have an almost caveman feel. Simple but do the job. Funny though haw all those male dwarven warriors always seem to wear heavy boots. This lady is near barefoot. One tough lady for certain.
Looking at the lacing on the skirt you can really see that it looks solid. Going over other sections rather than just being a slightly raised line passing through. Again, a good attention to detail.

There are some faint mould lines on the outside of the feet which only needed a bit of light sanding. And you'll find the rest of the line on the inner legs and across the solid part under her skirt. Again though, quickly sorted with a light sanding.
I do kind of wish that the inner part filling the skirt was a little but further up. Not in some creepy weird pervert type way but more because the cloth doesn't seem as thin on the corners where it hangs away from the legs, though that really is me being picky and mainly because everything is just so well done here.
In case you're wondering about that top cut and the key... yes it matches up perfectly with the top half. 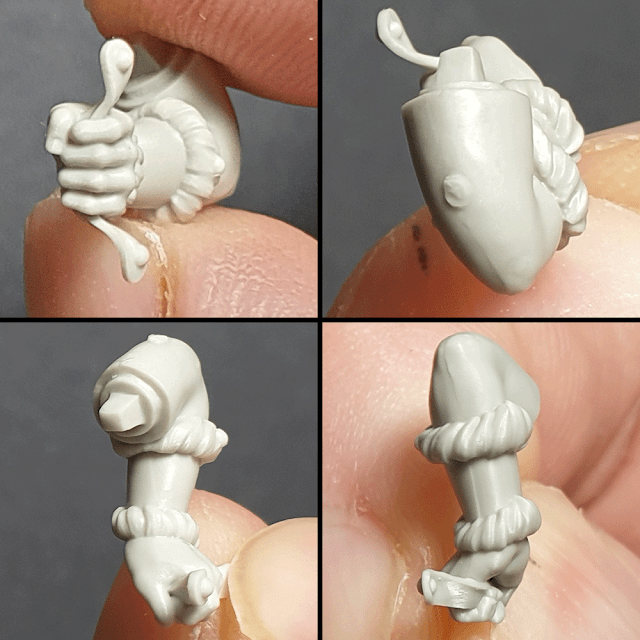 Her left arm is where I found the most work to do. Which says a lot as it's a little mould line and a pour point to sand off.
Nothing really to shout about unless you've not spotted the three round keys that match up spot on with... 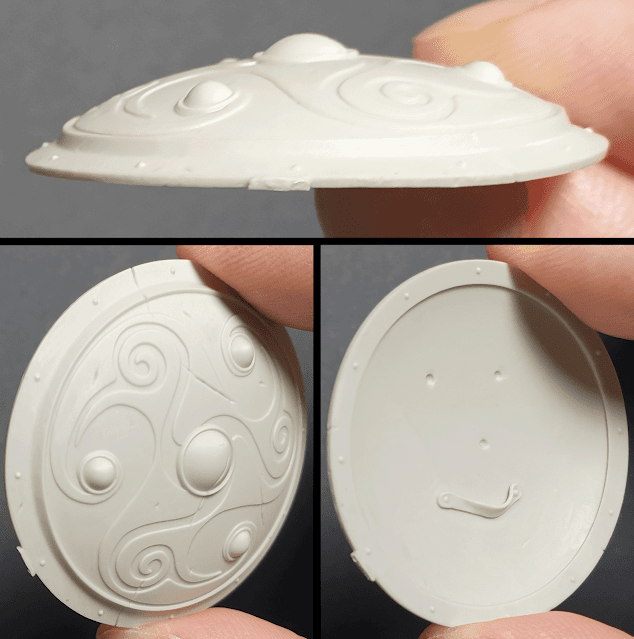 the three sockets on the inside of her huge shield.
Level of crispness on the detail on this is just stupid. Everything is reproduced fantastically and a little sand round the rim after trimming of that little tab of resin and this was done.

Her axe has a fine line top and bottom and some excess left on the ring on the handle. Quick fix once again.
Hand position is great. Relaxed but ready at the same time.
There's some nice detail on the axe and it does have a classic dwarven feel to it being double headed and having a runic pattern.

Last up, the base.
Not really much to say. Fits well to match up to her feet and as you can see there was some cleaning to be done around the edge. Though I think I'm more interested to see what scenes people create without this piece. 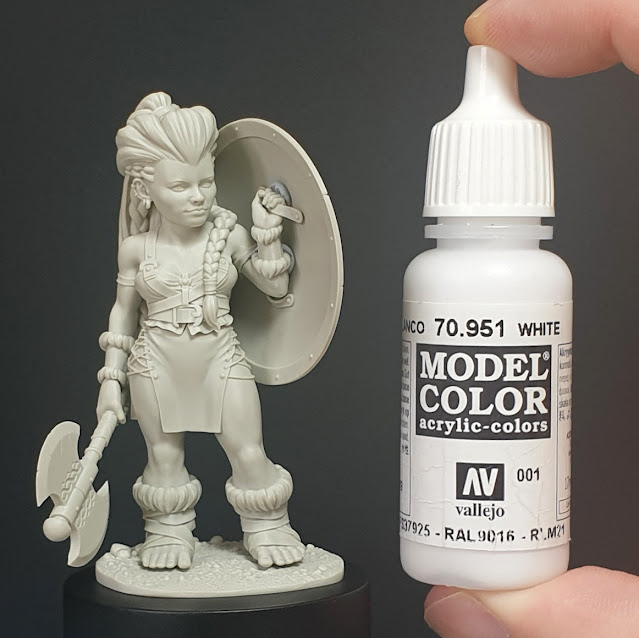 Being 75mm scale does not mean this dwarven shieldmaiden type warrior is 75mm in height. She comes in at 55mm to the eye so scaled well. Hope to see her in a party alongside some non dwarf adventurers if someone goes full in for a larger scale diorama. 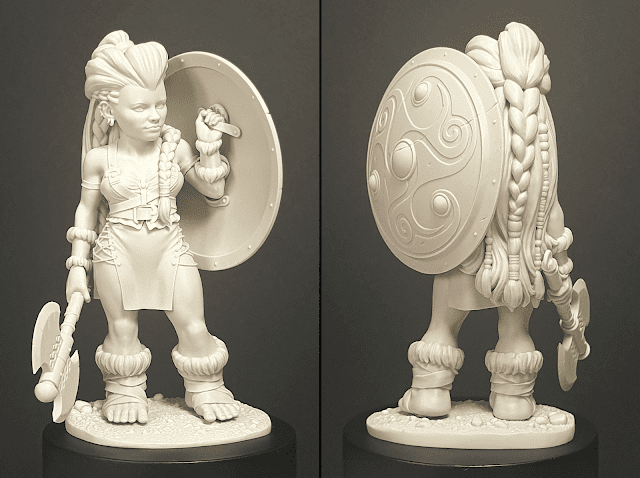 Have to admit I was impressed when I first saw the images teased on social media. Initially I thought it was a bust but I'm glad Hlin turned out to be a full figure.
Speaking of figure; Hlin isn't a stereotypical dwarf female which are often shown as being quite round, buxom, and for some reason often seen dealing with food. This to me feels fresh, even though with the larger feet and slimmer frame I'm left wondering if a frisky hobbit may have been involved somehow.
Anyway...
The way this figure has been cut and the joins designed is stupidly good. The only join on these photos which I glued is the waist. Everything else is held with blutac. I've found no bubbles and no gaps so that's absolutely zero gap filling to do which is always a bonus.
Hlin feels very much like a great figure to paint. Plenty of different materials but not overdone with details. Excellent anatomy and overall design leaving her feeling relaxed but also someone not to be messed with at the same time. And there are already some excellent painted versions appearing and I'm really looking forward to seeing more. 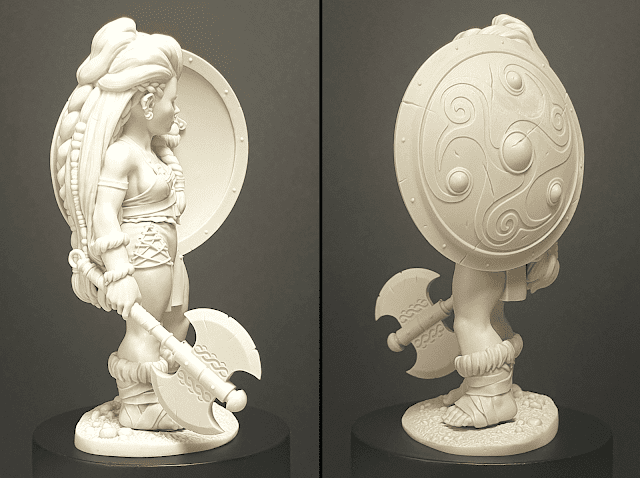 Hiln is available directly from Black Crow Miniatures for 36.30€ (30€ excluding VAT) at https://www.blackcrowminiatures.com/
If you would like to keep up to date with Black Crow Miniatures then give their Facebook page a like and follow their Instagram.
Thank you for you time as always. Stay safe, happy hobbying, and seriously... don't drink your paint water.

Want to support GMR?
Have a product you would like us to review? Contact us and we'll be happy to talk.
If you would like to Donate to the running of GMR, anything is greatly appreciated.
Written by Steve Haydon (Forté) on Monday, July 27, 2020
Email ThisBlogThis!Share to TwitterShare to FacebookShare to Pinterest
Labels: 2020, 75mm, Black Crow Miniatures, Dwarf, Fantasy, Female