Liath the Druidess from Kimera 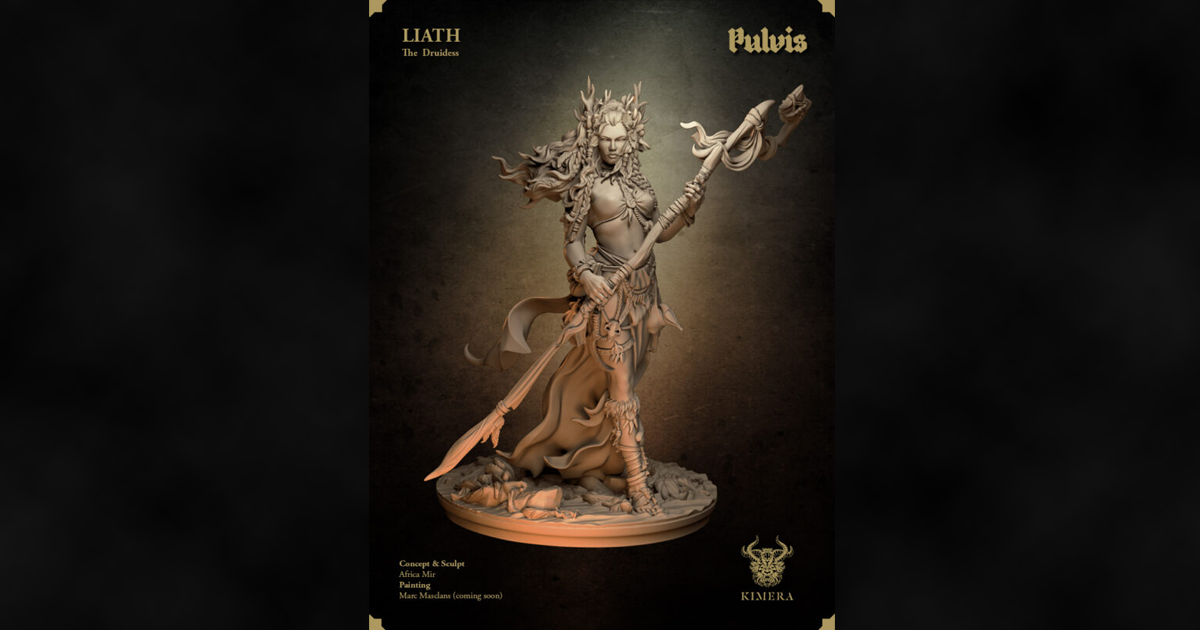 It’s Monday and that can only mean one thing, back to work...

This week I am taking a look at one of the recent releases from the Pegaso/ Kimera stable; Liath the Druidess from the Pulvis range.


For those who don’t know, Pulvis is a fantasy world that these figures are conceptualised within and in Pulvis you will find all manner of fantasy characters and creatures for your collecting pleasure.

Liath is the newest release from Kimera and it is possibly 1 of 2 pieces from Kimera I actually like (now, before someone gets upset that Kimera haven’t pricked my focus until now, we all like different things so sit back down and breathe it’s not personal I just prefer Pegaso kits) so I spent the cash and hey it’s here with another kit to be reviewed later.

So let’s take a look and see what Liath has for us.

Liath was one of those miniatures I saw and thought oh I quite like that and when it hit the store I got a copy in the “Oh Shiny” way we often do.

Liath is sculpted by Africa Mir and the box art painted by Marc Masclans. 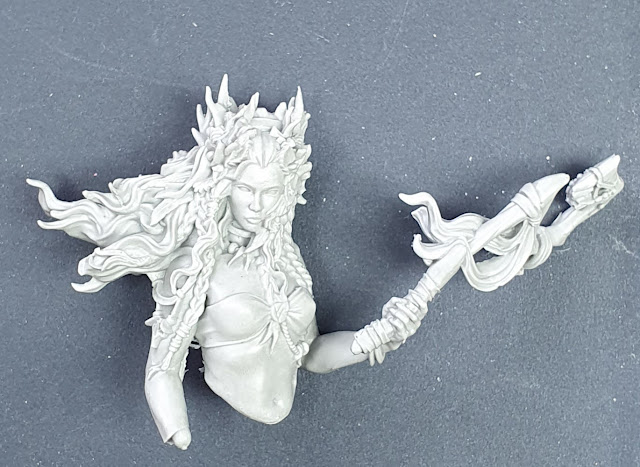 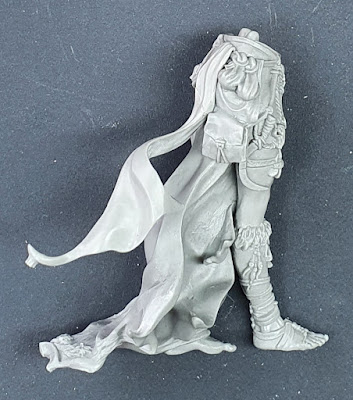 It comes in a printed sleeve box and in 3 pre-assembled pieces of grey dyed resin and is sized at 75mm in height.

Why pre-assembled? We will get to that shortly...

Without the pre-assembly I think this would be 5 parts to the kit, the scarf and arm would be the extra parts.

As her name suggests she is a Druidess. Her attire is that of woodland folk you would usually see on wood elves in fantasy novels and artwork.

She carries a druid’s stave which is home to some kind of gem stone and ribbon adornment.

This figure is clearly female so it’s nice to see she hasn’t been over sexualised, which is always refreshing to see. 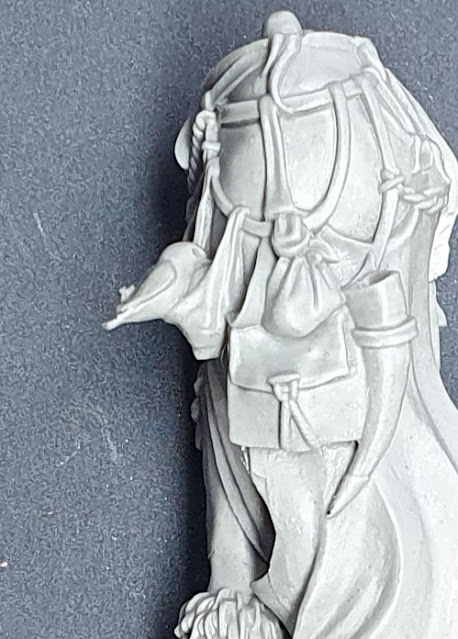 She is very pagan in aesthetic even right down to the little bird feeding in the grain pouch on her belt.

So there is plenty of detail to see and paint on this miniature so if this fantasy style is your thing maybe this piece is for you?

So let’s discuss quality shall we... 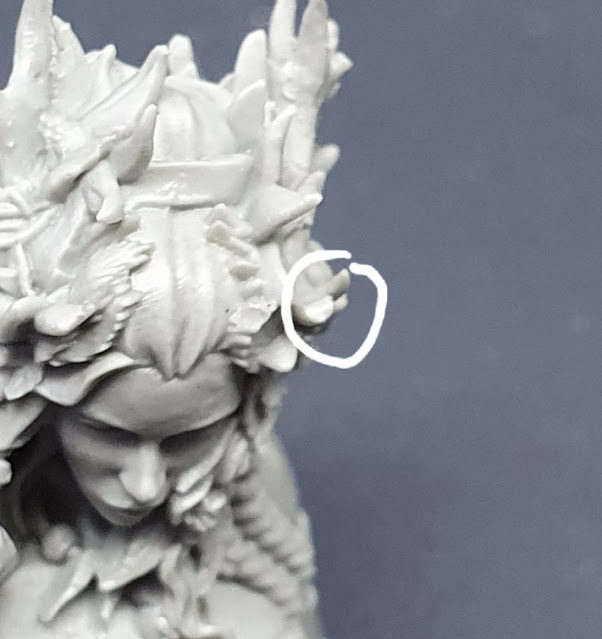 So right out the box it was observed that there is supposed to be thorns or sharp bones in her hair but one small bone has broken.  It looks like who ever took it out the mould didn’t take care to look for damage so it reached the customer broken.

It happens at times yes, but for a €54 inc taxes model should be arriving in perfect condition.
So what else was noticed?

The pre-assembly seems to have been rushed without considering the customer’s needs or ability.
Why is this you ask??

Well, the pre-assembly has been done in the fight against recasting. This is a very noble and worth-while fight, because recasting steals a living from the original creators of the original pieces.

So Kimera and Pegaso have started doing this to their kits. I am all for steps like this but what I am not ok with is the lack of clean up performed on the pieces that have been pre-assembled. 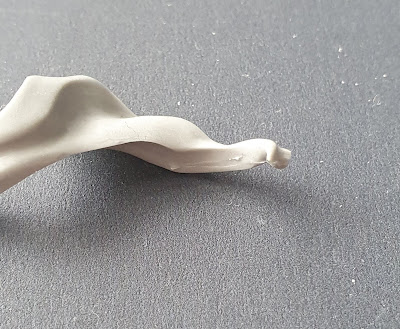 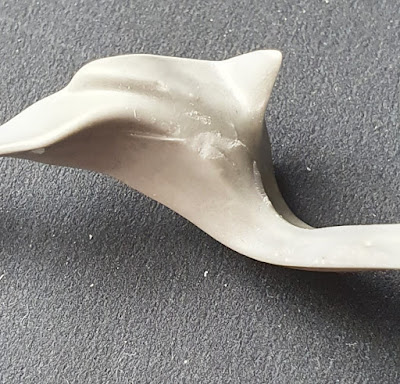 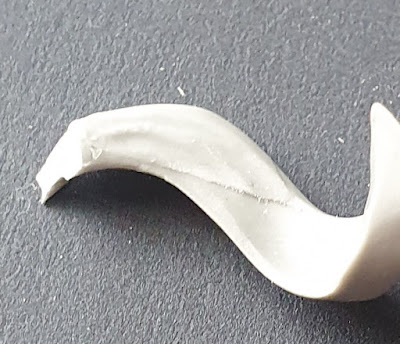 There is a scarf flowing from the belt that has caught the wind but on the underside of this piece is a mould line. As it happens I just snapped the scarf off by accident which made it easier to photograph the issue... I actually dropped it and caught it but smacked it against the table in the process...

Now I also know how brittle this resin is... also I know I’m never going to make it as a juggler...

If pre-assembly is to happen surely this should have been cleaned up so the customer doesn’t have to twist and turn to try and scrape and buff the mould line. 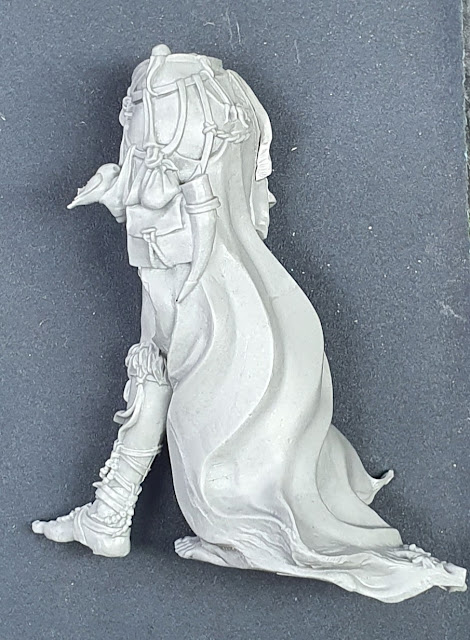 There is also several other mould lines to be taken care of the worst runs up the folds of the flowing skirt.

I am an old hand at this hobby so I can manage some tricky details like this, but other hobbyists don't have the experience to clean this kind of issue up to a good standard while the piece is stuck in place.

So, my suggestion to Kimera is to at least take care of the parts that could potentially cause some hobbyists a difficult time during the preparation of this kit.

As you guys know, I do feel the upper echelon of miniature producers who sell at premium prices should give a premium service and I feel leaving the clean up totally to the customer is taking advantage of their need for the miniatures they buy.

Now, I have said it before many times that customers are usually experienced hobbyists and can take care of these kinds of issues but if someone less experienced buys a kit that has not been cleaned they will wonder if it was worth the money to have to put all this work in and cope with tricky clean up like on this kit.

Food for thought?
Or
Just being fussy?

You have an opinion why not lets us know what you think, but keep it civil...

Now being the guy I am with a leaning to the pagan side of life I do really like the concept of this miniature. Africa has done a really nice job of the sculpture working in 3D.

Liath really does hit home the early days of my wargaming days when I collected wood elves and other characters for when I played fantasy role play. So, Liath the Druidess fits into my grey mountain stash very well as she is very much my kind of miniature.

The little teeth and bones that decorate this figure and the little bit of movement from the windswept scarf just reduce the static feel of the pose so you could easily make a vignette with this kit if you desired rather than just plopping her on a plinth.

If you wish to purchase this or any of the Pegaso/ Kimera range head over to www.pegasoworld.com and check out their whole range. You can also keep up to date by liking their Facebook page or following them on Instagram.


My final thoughts on Liath the Druidess have me somewhat in dismay. I really do like the actual figurine and will get around to painting it eventually... yeaaaah ok we all say that lol.
But the little production details have me a little saddened that they weren’t noticed or considered before shipping it out, it would have taken the caster or the assembly line minutes to remove the mould line before assembling it.

But this is my outlook on it, what is your opinion on the subject? Is it a big deal or is it one of those things you expect to deal with?

Pop us a comment and let us know what you feel about the pre-assembly reason and should things be cleaned first before being glued in place?

So, thanks for reading and I hope this review helped influence your choice of purchase.
Have a nice week and remember don’t drink the paint water.

Kimera made contact with us to discuss this copy of Liath and as expected have given excellent after sale service. If you ever get a kit you are not happy with (and this applies to any company) get in contact with them and supply photos showing your concerns. It's rare that companies will not want to help a customer with their products.
Please, do go down that route rather than venting on social media, You'll be surprised how many companies really value their customers.
Want to support GMR?
Have a product you would like us to review? Contact us and we'll be happy to talk.
If you would like to Donate to the running of GMR, anything is greatly appreciated.