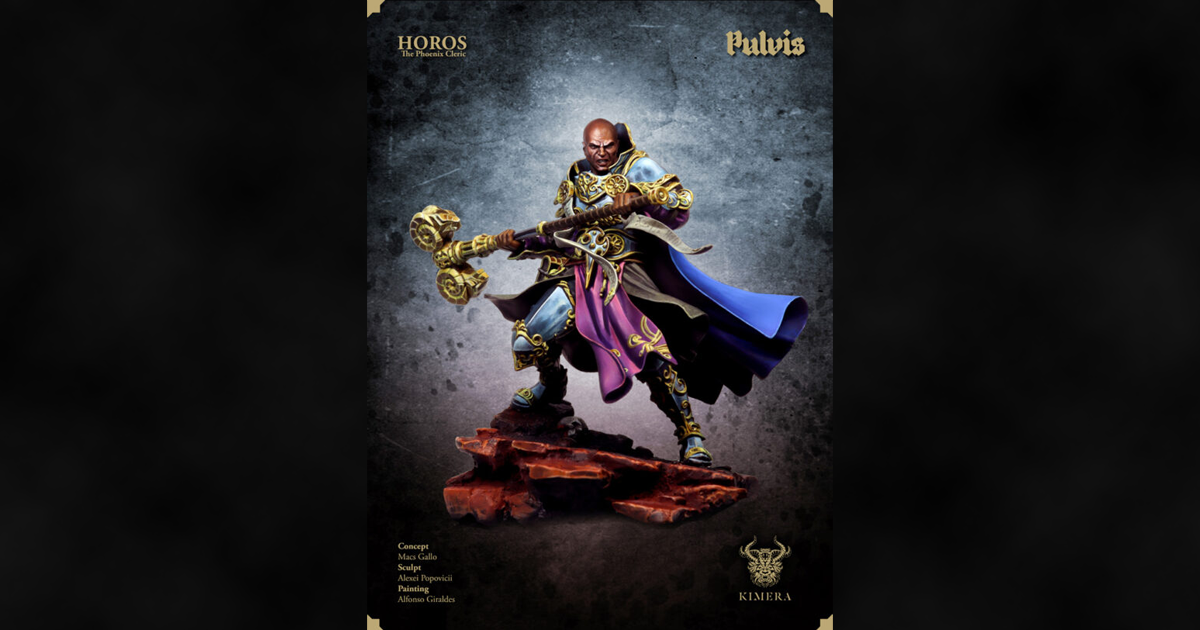 As you may remember in my previous review of Kimera’s Liath I mentioned I would be taking a look at Horos, the Phoenix Cleric.

Today is that day...

Horos is again one of those miniatures that got my interest when I saw it in photos of sculptures at the Monte San Savino Show if I recall correctly?

Then I saw Alfonso Giraldes painting it on Facebook and I thought "yeah that’s one for the collection".

Once it arrived from Pegaso World with Liath I gave it a quick look over, but today you will see what I saw and what I think about this miniature. 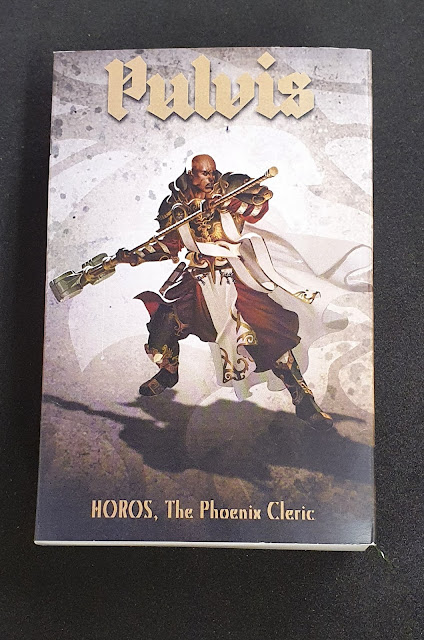 Horos arrived in the usual sleeved printed box with the concept artwork on the cover and the colours of the cover art are pretty nice too.

I don’t often like to copy cover art but these colours are my go to colours so I will probably be attempting a similar scheme to the cover art.

Now with that in mind let’s take a look at the contents of the box. 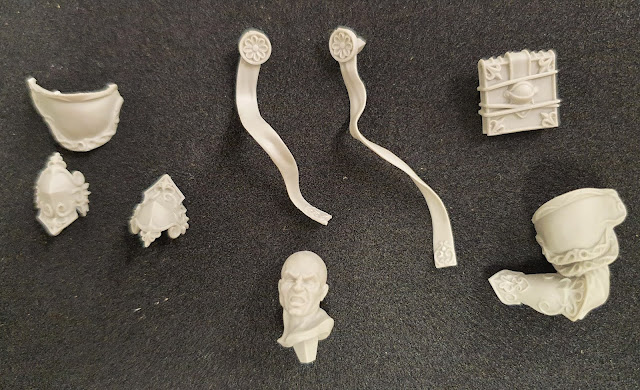 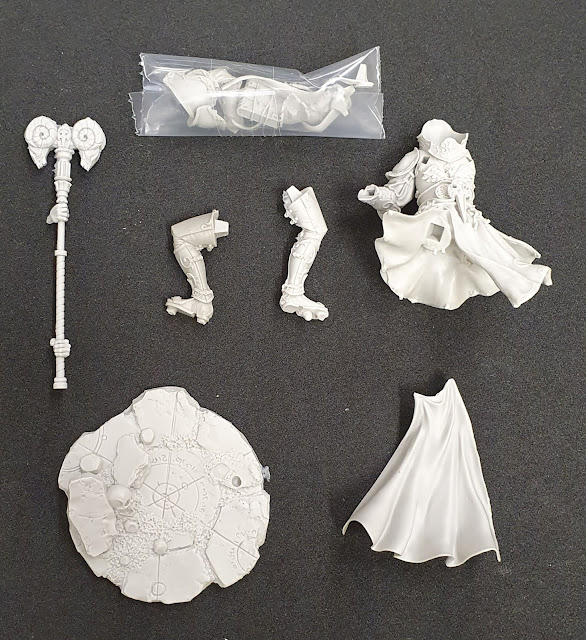 Horos, the Phoenix Cleric comes in 14 grey dyed resin parts packed nice and secure, and comes at the price of €54.90 the same as Liath. 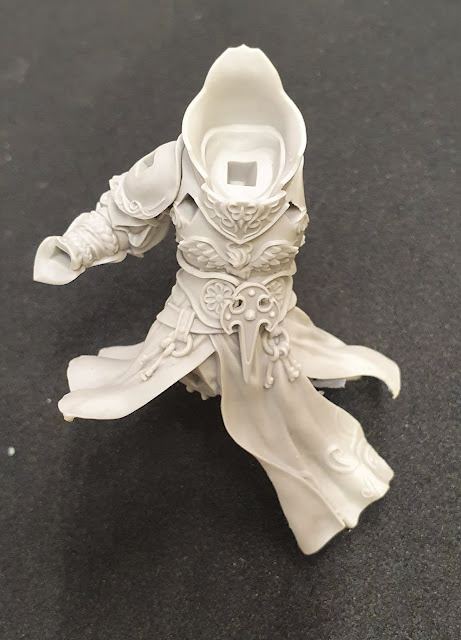 Giving the parts a look over, again we can immediately see the pre-assembled pieces that Kimera have settled on doing, and again we can see how the pieces have been assembled without thought to clean up.

As I mentioned in the previous review, my personal feelings on this are that if you are going to pre-assemble parts you should at least clean those parts to a decent standard before gluing them together as this now makes the clean up for the customer more of a task than it should be.

I have spoken to Kimera regarding my thoughts and I still believe this should be done better before gluing together. If you can take the time to sit and glue the pieces together it would take literally another minute to scrape and buff a part before assembly.

However, this is how Kimera send out their products and the customer will have to take care of these issues and I am sure many of us are capable, but I still feel this is a production issue that doesn’t need to be present on the cast.

So, as hobbyists many of us will expect to do some kind of clean up and I know many customers will defend quality issues and will not contest any miss casts or casting quality issues.

Myself; I feel casters and producers have a duty to send out a product in the best quality condition when asking premium prices.

With that in mind take a look at what else I saw when inspecting the cast quality. 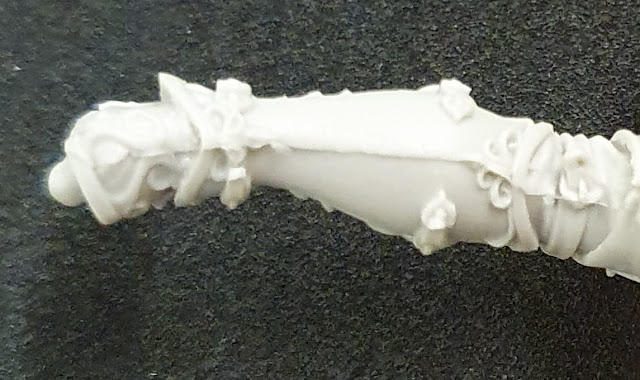 Running down the back of one leg is a quite abrupt step in the resin, this can be caused by several issues but it should not be sent out to a customer in this state. 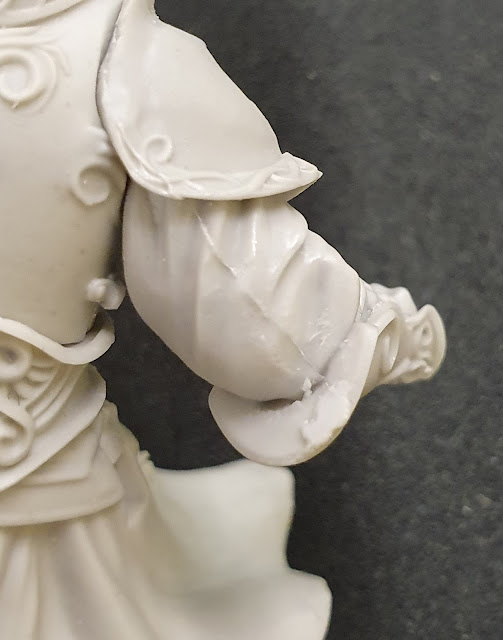 There is also a mould line which runs up the pre-assembled arm; this would not be so bad if the caster had cut the mould away from the detail but as it stands the mould line again runs through the detail of the shoulder pouldron and runs up over the shoulder in a very tricky spot to clean which goes back to my point about pre-assembly earlier. 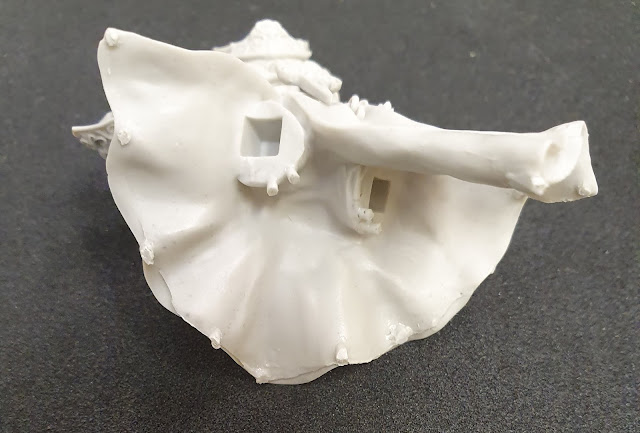 Looking under the cloak you can clearly see the casting vents and the mould line where the caster has actually tried to hide a mould line which surprises me because of previous cuts. Because of locating the cut in this way any prep will be hidden and this is well placed in this instance. 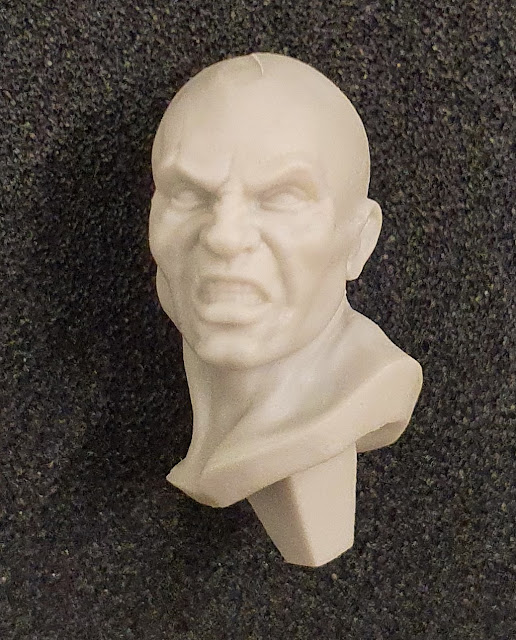 The only other issues I found were the casting vents on the hammer head and a little flash which often appear on miniatures, and a mould line down the back of the head, you can just see the start of it in the photo on top of the head.
As Horos is bald this will not cause any great issues in the preparation stage.
What really surprises me is the small parts have all been cast really well. Usually it is the small parts from many producers products that suffer poor casts due to size of moulds and cuts, but the caster seems to have nailed it on these pieces. 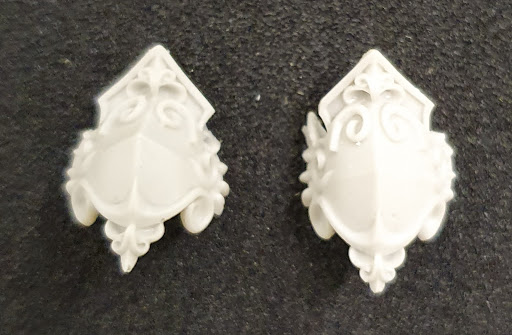 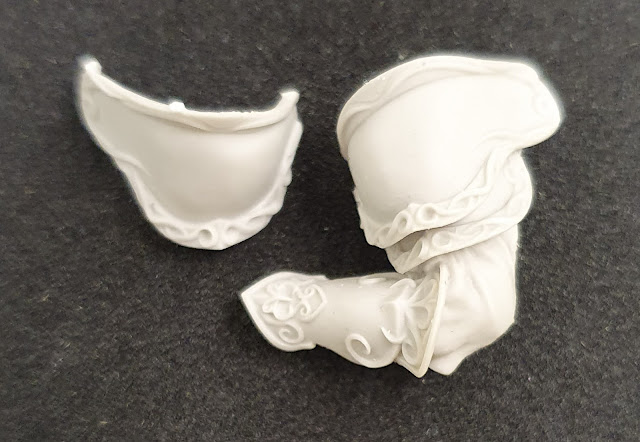 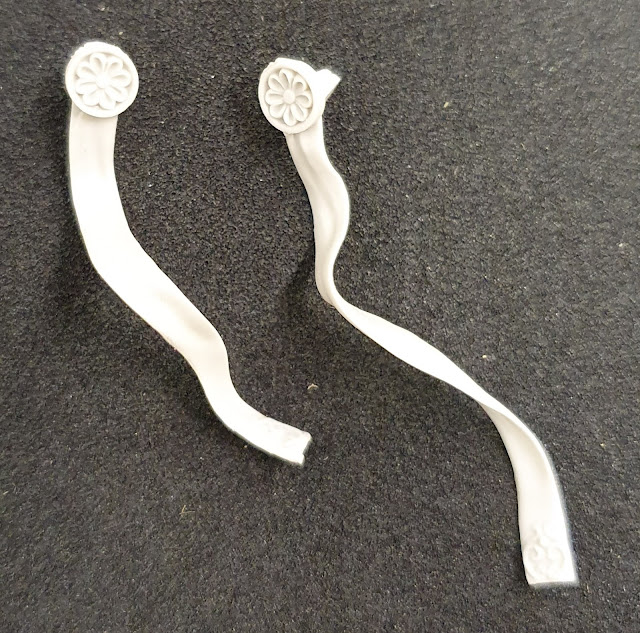 The theme of Horos is right up my street when it comes to the fantasy genre. In fact my first ever Golden Demon entry back in 1989 was a battle bishop which was not a million miles away from the design of Horos, except he was on a horse and the guys who handled it broke it but that’s another story...
What I do like about the design is all the filigree on the armour which once sorted out of the issues will look nice when I eventually paint it maybe this time in 2030 haha.. 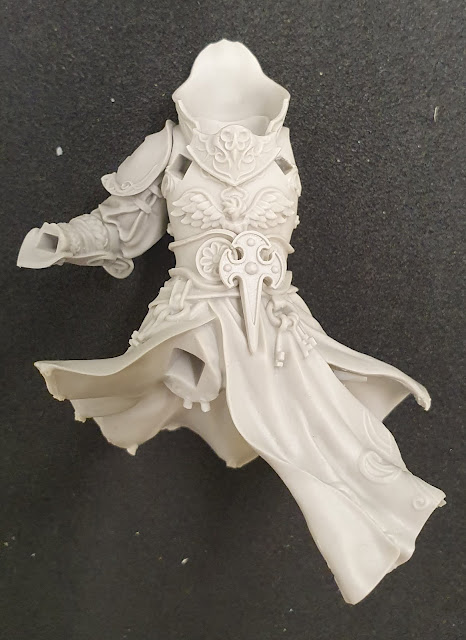 The Phoenix on his breast plate is really nice. I can see someone going all out on that and I am sure flames will be painted but that person will be a much better painter than myself.
The Dynamism of the piece is pushed on by the movement in the cloak and ribbons that are being lifted by the wind and the hammer being wielded in a defensive stance about to counter an attack or give something one hell of thump as the double rams head hammer falls. 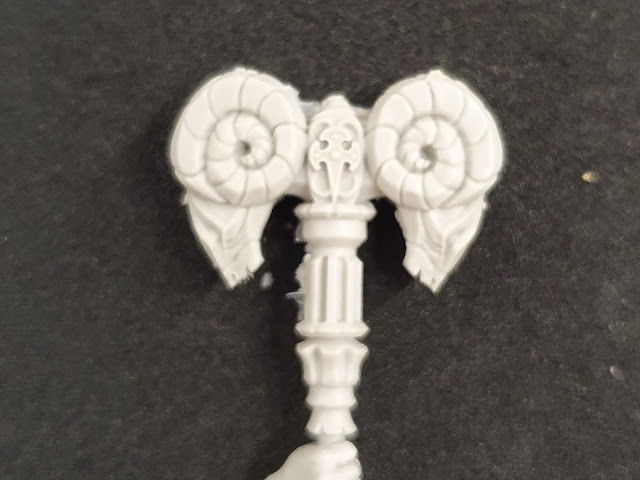 What I have noticed is the possible influence from a certain Horus of the Horus heresy from Games Workshop.
How have I come to this conclusion?
Well his name is Horos and on the tome the rests on his hip there is what looks a lot like the Eye of Horus. 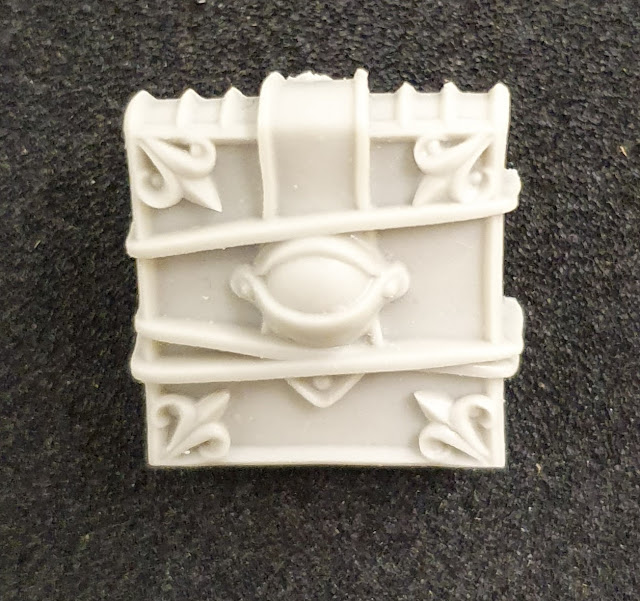 I know many arcane tomes have many kinds of iconography on them but the name and the eye simply remind me of the Horus from GW.
It may be intentional, it may have been unintentional, but either way it sparked my memory and that is what I settles on.
It would be nice to hear from Macs Gallo (the concept artist) to find out if there was any influence from Horus of GW in this concept.
Alexei Popovici is the sculptor and he has done a very nice job in bringing the concept to life and the box art has breathed life further into the sculpture which was done by the very talented Alfonso “Banshee” Giraldes.
I can say this has been a very cool production team put together from Kimera to bring Horos to our hobby benches worldwide.
Again, I want to say I do like this miniature a lot but I have once again been let down by the casting quality of this piece.
I feel the steps between the print going to the caster and the moment this miniature arrived on my desk have let the piece down a lot.
Horos, the Phoenix Cleric had the potential to be and outstanding product but the casting has let it down dramatically.
If the pieces I have pointed out were cast as nice as the other parts then this miniature would have been on the top of my painting list but as it is I will have to wait till my motivation is at a level that I want to sit and clean up the mess that is surely putting me off.
I will say that Francesco Farabi did contact me with his reasons for the products going out to the customer in this condition and offered to send replacement parts too so always contact Kimera/ Pegaso directly if you're not happy with a product. For the most part I can agree with what he said, but in closing I will always stand by my view that the customer should never have to shoulder the burden of a poor cast. Some clean up is fine we do expect that but when we have to spend a considerable amount of time putting right what should be already cast correctly then I will never be ok with that.
In summary, what should have been one of my favourite miniatures to date has turned out to be one I will not attempt any time soon till I can find the heart to tackle all that fine detail that has been obscured by mould lines.
Some casters really need to rethink where they cut moulds and some sculptors really need to consider the casting process and not put detail everywhere forcing casters to cut moulds in awkward places.
Needless to say my purchases from Kimera have been a bit of a letdown and this is quite disheartening as their new miniatures in the Pulvis range are very nice and it makes me think twice about the quality they will arrive in and am I willing to take the risk to purchase them?
Do you have an opinion or have you purchased a copy of Horos and you find it to be good quality?
Why not get in touch and let us know...
If you would like to purchase your own copy you can directly from Kimera at https://www.pegasoworld.com/product/horos/ or via one of their official stockists.
You can also follow them for future releases via Facebook or Instagram.
I hope you found this review helpful or you even if you disagree with any points made please do let us know as we would really like to hear from other customers/readers.
Thank You for reading and as always pleased remember to not drink the paint water...
Want to support GMR?
Have a product you would like us to review? Contact us and we'll be happy to talk.
If you would like to Donate to the running of GMR, anything is greatly appreciated.
Written by Normski on Monday, August 17, 2020
Email ThisBlogThis!Share to TwitterShare to FacebookShare to Pinterest
Labels: 75mm, Fantasy, Figure, Kimera Models, Pulvis