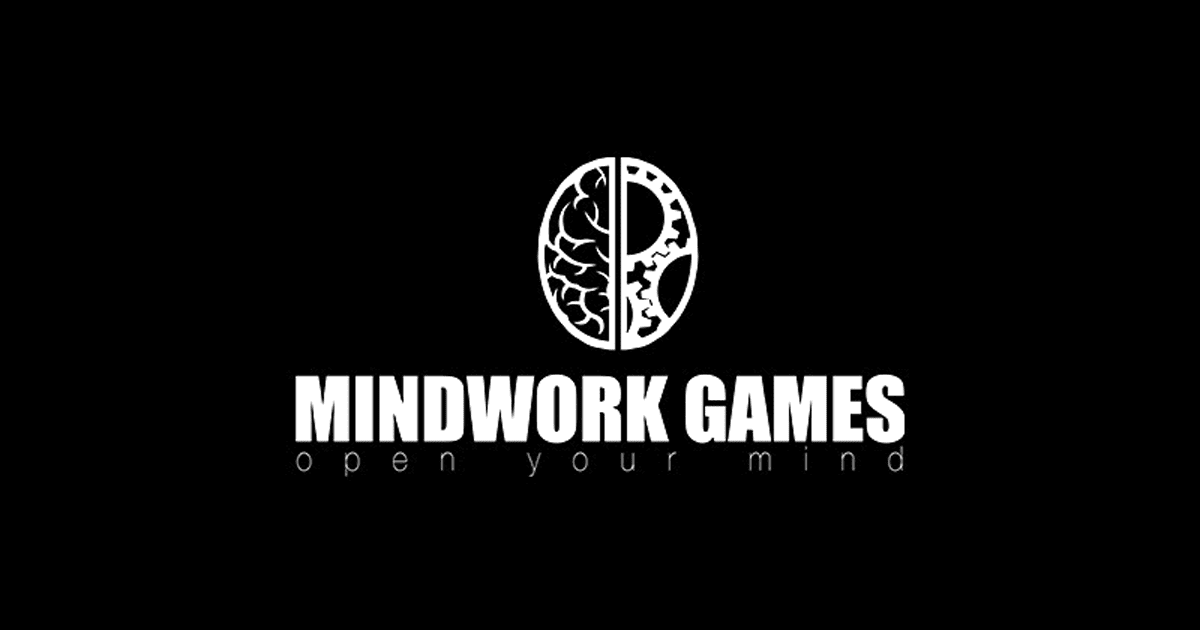 Hope you've been well an able to get in some quality hobby time.
Following on from last weeks Mindwork Games part 1: Blood Temple, it's time to take a look at a second kit named Lone Wolf based on the artwork of Gerald Brom.

Slight change in box with a classic black and white style and a lower, square style. Bit of plastic in the form of bubble wrap to protect the main body part of the figure. Still think a slightly sturdier box could be good for protection but that could also be more what I'm familiar with than anything else. 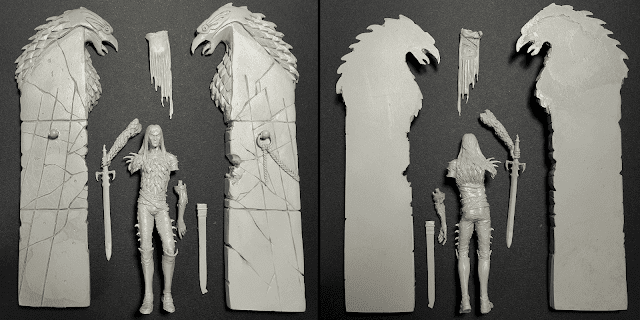 Seven sections this time around including two large scenic parts.
Martin Lavat is the sculptor responsible and unlike most of the recent Mindwork Games releases it is sculpted using Beesputty, Procreate and Magic Sculpt.

It would be rude not to talk a bit about the original art by Brom. So here goes... 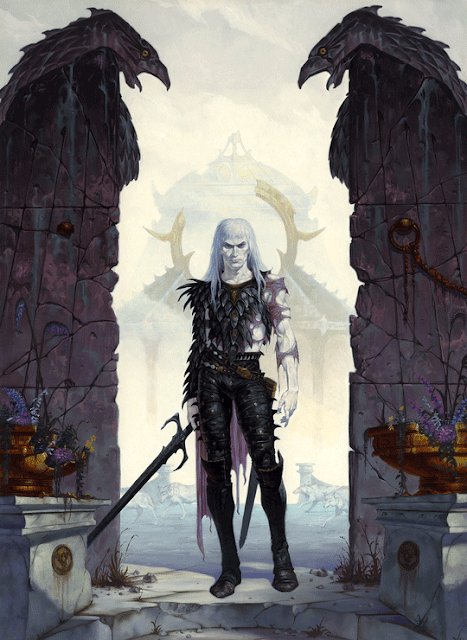 Lone Wolf is a depiction of a popular fictional character created by Michael Moorcock who first appeared in writing back in 1961. Elric of Melniboné has since featured in many novels and comics throughout the years. Appearing in stories with the likes of Conan the Barbarian, Adam Warlock, and more.
Even music has been influenced throughout the years by the character with bands like Deep Purple, Blue Oyster Cult, and Hawkwind being on the list on the Wiki page. Makes for pretty fascinating reading if, like myself, you are not familiar with the character.
One description goes "It is the colour of a bleached skull, his flesh; and the long hair which flows below his shoulders is milk-white. From the tapering, beautiful head stare two slanting eyes, crimson and moody..." and I'd easily say Brom captures that.

Back to the miniature now... 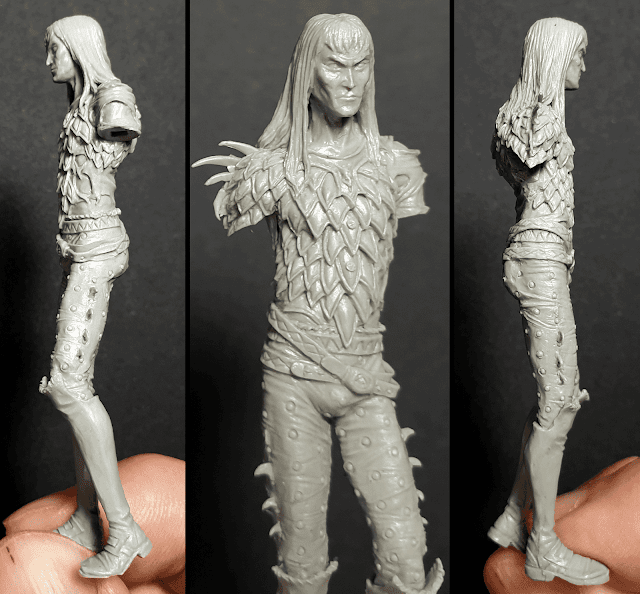 Looking between the main part of the figure and the art and you certainly see that Martin has certainly captured the frail and slim body shape along with the clothing and general overall look and feel. Not bad going from a 2D canvas painting.
There is usually four spikes on each leg... but I clumsily managed to knock one of them and break it. Oops. 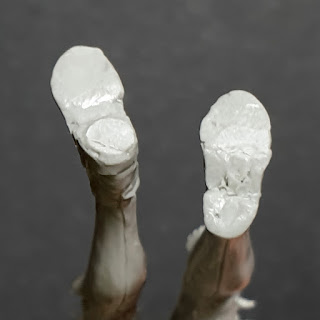 Cast quality of this main section is pretty good. Faint mould line running around the outside from a two part mould and a main pour point found on the bottom or the foot which will be flat on the floor.
Resin wise, it cleaned up easily and isn't oily or covered with mould release which is always a good thing. 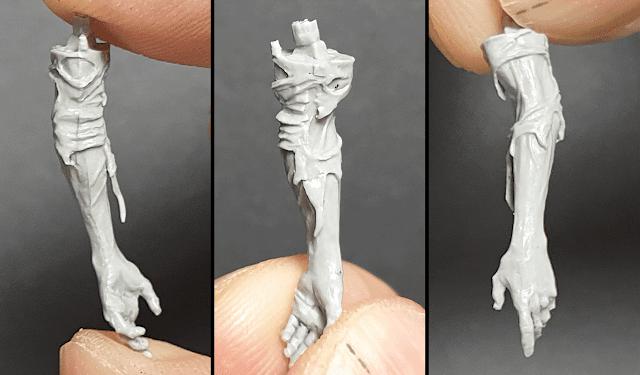 His left arm is in a relaxed but ready position. Not aggressive but ready for things if they would change.
Couple of pegs to remove at the join. Nothing that's in a visible position once assembled though which is always a good thing. Bit of mould line running down the back of the arm to be removed or filled depending on your preference.
Good looking hand sculpt though. Aged feel but not weak at the same time. 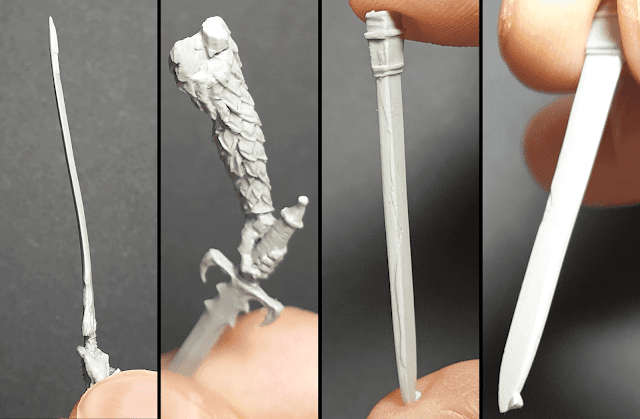 Oh my god... a banana sword!!!
It's resin so don't panic. I sanded the area at the tip of the blade, cleaned up the pommel and all the other mould lines on the arm, which wasn't really much being honest. But when it came to hot water dipping the blade it went like this. Boil water in a bowl, dip the curved blade in until it seems softer, pull out of the water to straighten and see that it had become straight, run under cold water. Seriously, it straightened in the hot water without me touching it so the curve must've happened in the package rather than casting. Bonus.
Scabbard cleaning was straightforward and locating where it attaches to the figure was easy too. Great cutting in the whole really.

The piece of cloth that hangs from his back is again pretty well cast. Couple of resin lumps to remove from casting and a bit of mould line around the edge but nothing more than expected.
What I will say with this figure which I have touched on is the way the parts have been cut. You can tell from the cloth part that it will fit exactly where intended with no question. and that is the general feel across the whole figure.
The only join that needed a bit of work was the right arm. This was cut more to preserve the armour sculpting and avoid having a join running through the scales. A pin and some filler will have that done anyway. So in general I can't say anything bad. Yes, it isn't the standard of digital sculpting joins but it's pretty close. 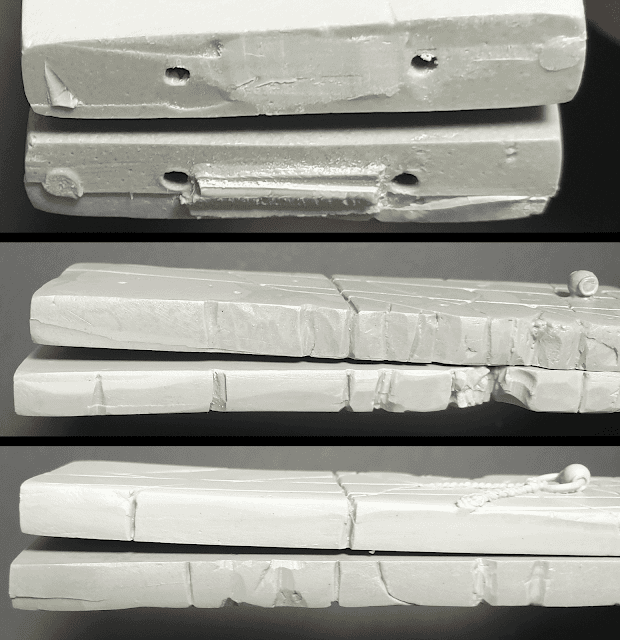 The basing parts or more background parts do give a nice frame to the figure. Though sadly the backs are complete smooth as you'll see in the assembled photos further down. I say "sadly" because I like to be able to turn miniatures around and see them from different angles. Especially when someone puts in time sculpting them and the another person paints. However; there is quite a trend at the moment for using backdrops and this is where I can really see these getting good use.
Bit of mould line around the outside, some pouring areas at the bottom to sand smooth, and one is a little warped. I may need to use a hairdryer to warm that to flatten it.
But... and this I maybe got a little excited over (I'm a simple person really); pilot holes! Two at the bottom of each part. deep enough to use straight away but also deep enough to make sure you can drill straight if you want extra pinning strength. Lovely touch. 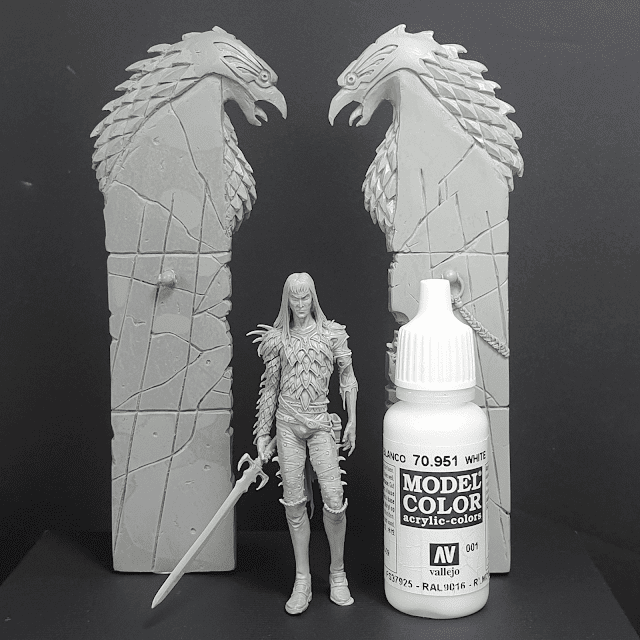 Martin has done well to bring this piece of 2D art into a 3D sculpture. Does surprise me to see the background created too but if you look at the rest of the Mindwork Games range you'll see that some scenic parts are always included in the more recent releases.
Without finding out about the character of Elric I was left wondering why his anatomy seemed slightly stretched, but I can tell it's a long running trait of Elric, quite distinctive and helps him stand out. Obviously aside from his albinism.
As a kit, it's good. Easy to clean and assemble and really gives you a good starting point for creating a scene. Though you'll need a wide plinth or picture frame depending on your plans. Think I'll need to have a good think on how to approach this one.
Priced at 60€ which I feel fits for what you get.

Where to buy and other info

Lone Wolf can be bought directly from Mindwork Games at https://mindworkgames.net but is limited to just 200 copies.
Of course Mindwork Games are on social media so go give them a look on Facebook and Instagram.
Thank you for reading and I hope you check out the Mindwork Games range and find something you like.
Take care and stay safe.

Want to support GMR?
Have a product you would like us to review? Contact us and we'll be happy to talk.
If you would like to Donate to the running of GMR, anything is greatly appreciated.
Written by Steve Haydon (Forté) on Monday, August 31, 2020
Email ThisBlogThis!Share to TwitterShare to FacebookShare to Pinterest
Labels: 75mm, Brom, Mindwork Games