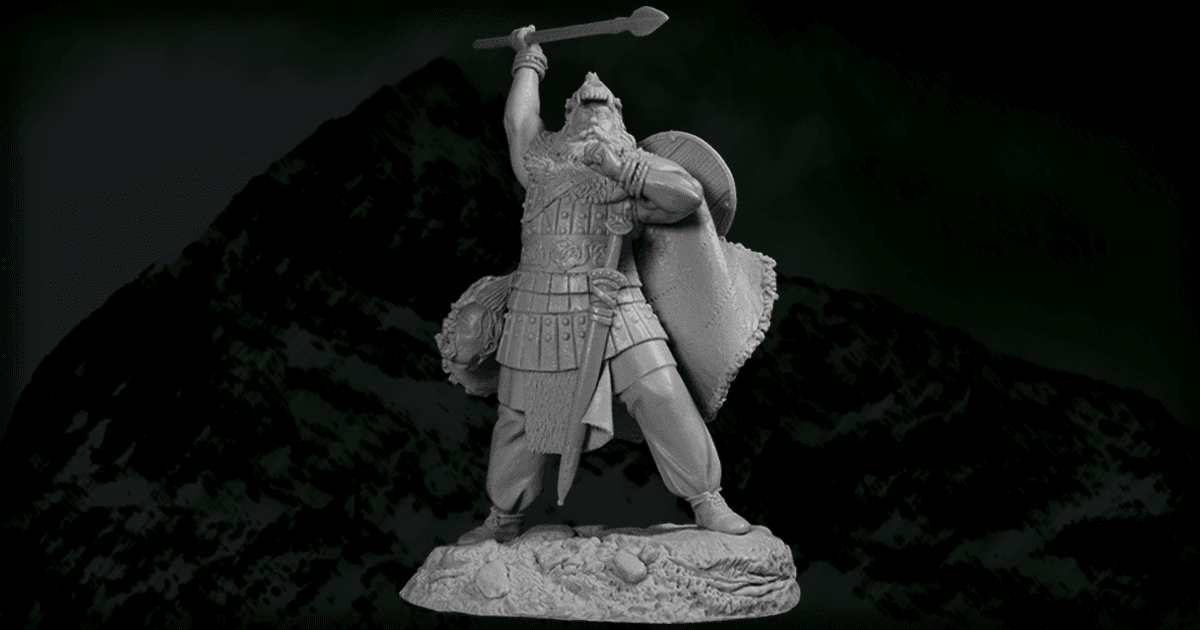 Two weeks back I took my first look at a Blast Model figure in the form of the Voyevoda of the 17th Century (check that one out too if you missed it). And so I thought I would take a look at the other figure they sent my way which is the Cuhullin, again in 54mm. 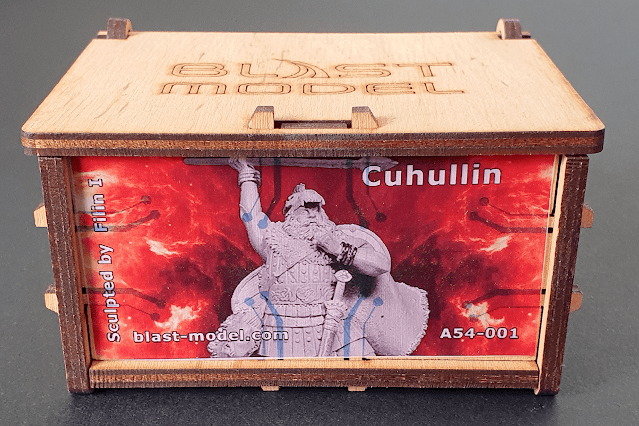 I had a little look up on what or who Cuhullin was. Cuhullin looks to be the English term for Cú Chulainn who is known to be an Irish mythological demigod. He appears in multiple Irish stories but also in Scottish and Manx (Isle of Mann) mythology too, so definitely give it a look up if that is of interest to you. 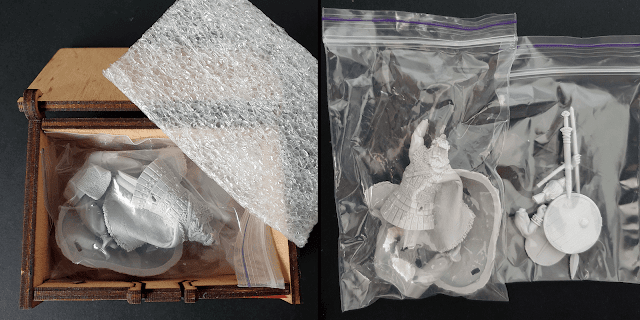 Exactly like the previous review; Cuhullin is packaged in a pretty cool laser cut wood box. All parts are in a couple of zip lock bags and safely held in place between some padding.
However; this figure is in more parts using a bit more resin. Still only comes in at 18€ direct from Blast Model (or £16.50 from Mezzer's Minis in the UK).

Nine separate parts including a choice of two shields to go on his back and a fairly ample and raised mound style base.
That small wooden box was packed with not much space left.
Igor Filin is again the sculptor here and it's nice to see more of his work.

Starting with the main focal point of the upper body. You can see a couple of large bits of excess resin where the join to the lower body is. These actually taper in so removing them and cleaning was stupidly easy. Slight mould line along the outside of his right arm but as expected after the last review it was easy to deal with. There really isn't much to clean up so far.
Detail and material wise you've already got almost everything on this one part. Fur, leather, skin, metal, hair, and bone. Some nice pattern detail on his belt too.

Down at the legs we find a little bit more to clean up but again, mostly where the two body parts connect so hiding it really well.
Slight mould line to remove but the resin responds well to scrapping and sanding so absolutely zero issue at all.
Some nice looking creases in the cloth for painting to add the the variation of materials across the figure. 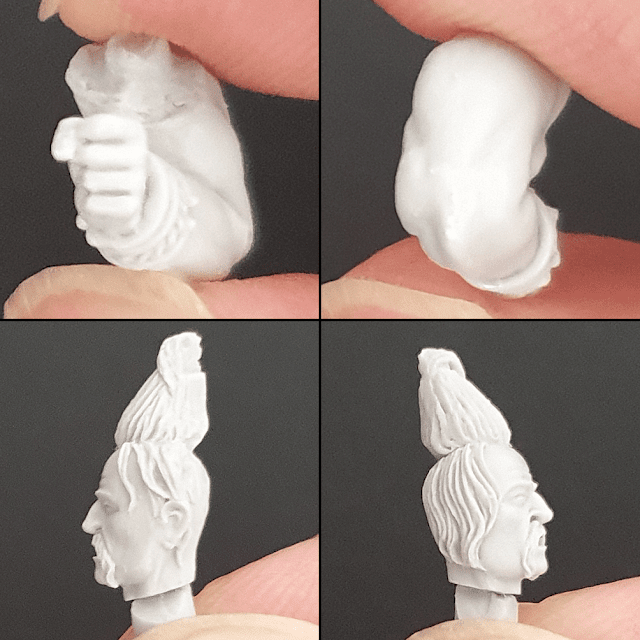 There's a couple of extra detail parts which I've not mentioned yet in the form of his left arm and a decapitated head. A must have accessory for all frenzy prone warriors...perhaps.
Nothing massive to note really with either part. Both share the same thing of not needing much clean up and both fitting into their positions easily and flush too.
There's some jewellery on his wrist which has a good Celtic feel. Possibly the wrong term but I'm sure you know what I mean (hopefully). 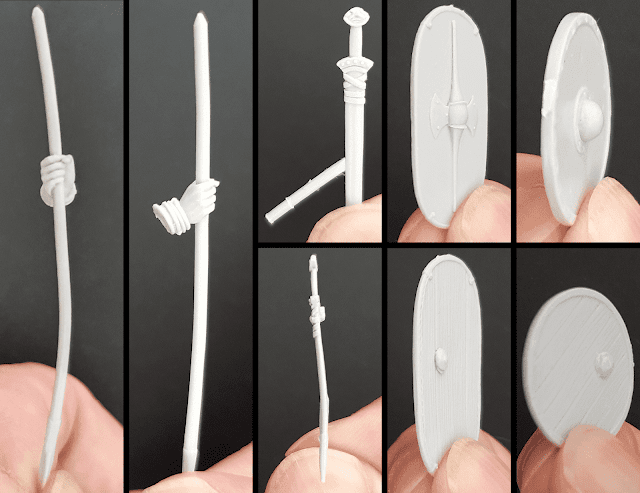 Every warrior needs a weapon...or two, and perhaps a shield (or two if you fancy a change in your day to day wardrobe).
Both weapons had a curve. If that spear was metal I would've been cursing. So on went the kettle for a cup of tea and a hot water dip. Good news too. The tea went down well. Also both weapons reacted well to the hot water (not my tea) and straightened out on their own which was a huge relief.
Really like the shield design choices. Both typical of the time and well sculpted. Good looking metal work but also plenty of room for those who like to freehand paint shield designs. 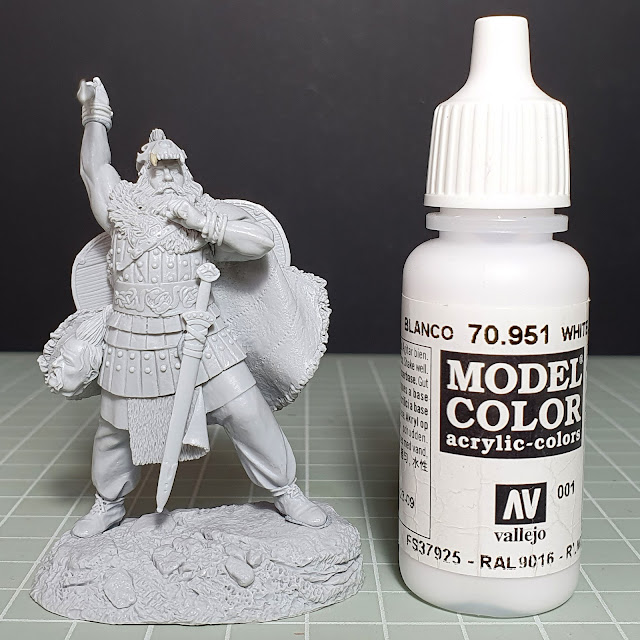 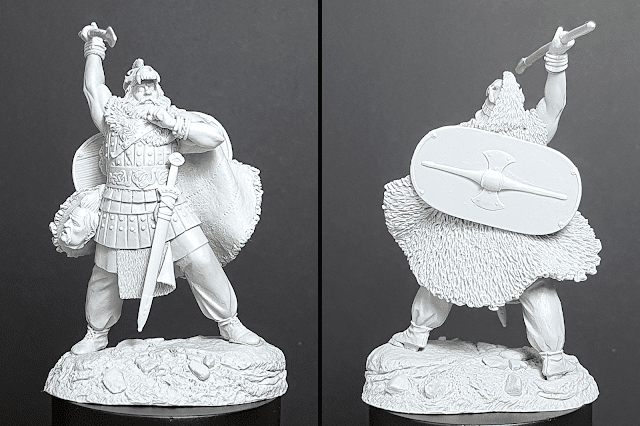 Wide variety of materials coupled with good resin, great assembly, and a budget friendly price. If you're into your ancient history or Celt type miniatures then you really can't go wrong here.
Yes, it isn't the most perfectly sculpted of miniatures, but it also doesn't have the high price which they come with and easily has a quality to satisfy all but the most fussy (as in more fussy than I am...they exist, I believe).
Great looking figure and I've been really impressed by Blast Model. Certainly expect to see them cropping up in collections and historical painting contests. 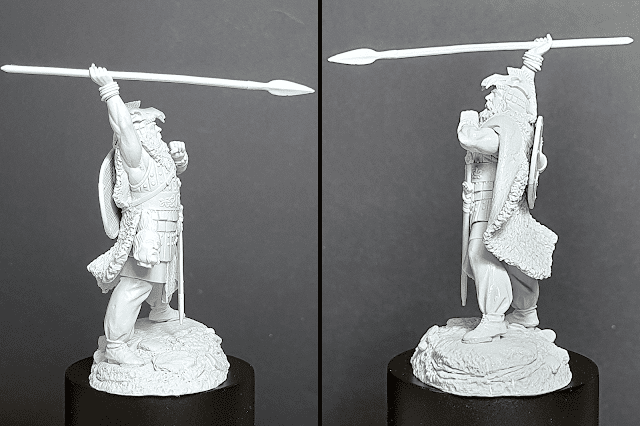 Where to buy from?

Cuhullin is of course available directly from Blast Model at https://blast-model.com or via Mezzer's Minis in the UK at https://www.mezzersminis.co.uk/blast-model-54mm
Blast Model are also on social media on Facebook and Instagram so make sure you check them out and give them a like or follow.
Thank you for checking out our reviews. Please feel free to leave comments, subscribe, donate, or if you have a product you would like us to review get in contact.
Take care and stay safe.

Want to support GMR?
Have a product you would like us to review? Contact us and we'll be happy to talk.
If you would like to Donate to the running of GMR, anything is greatly appreciated.
Written by Steve Haydon (Forté) on Monday, October 12, 2020
Email ThisBlogThis!Share to TwitterShare to FacebookShare to Pinterest
Labels: 54mm, Blast Model, Cuhullin, Figure, Filin I, Historical