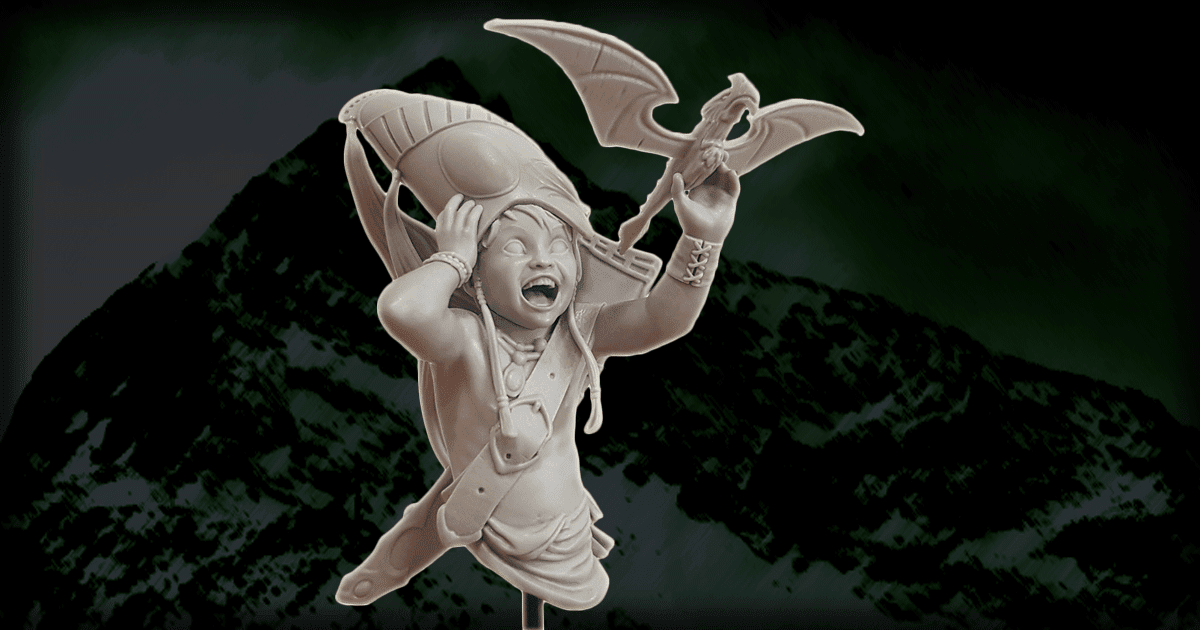 First review of 2021 and I really must say I hope you had a Happy New Year and all of us at GMR wish you the best for the rest of the year.
To kick the year off I have the latest release from Dragonhead Models. Prince Elwin is a 1/10th scale bust digitally sculpted by Joaquin Palacios from concept art by Diego Gisbert. 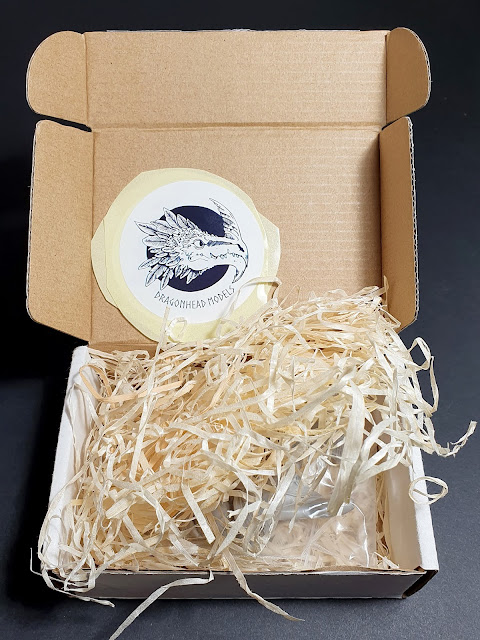 Now I've know Jamie (Dragonhead's owner) for a few years now after being on a few classes through Journeyman Miniatures, and having many, many chats on Facebook. These often revolve around his love of Games Workshop's Eldar and traditional sculpting (from the 90's in particular). Because of this he generously gifted me a copy without telling me (or I thought he was joking perhaps and forgot), and this is not the retail packaging you would receive.
If you know Jamie you may have heard his thoughts about digital sculpting a few times and maybe witnessed me banging my head repeatedly while in discussion with him. Needless to say, I think there's a few people out there that find it funny when we get going and I'm really starting to think he enjoys being a little wind up at times.
So let's take a look at the first ever digital sculpt to be released from Dragonhead Models. 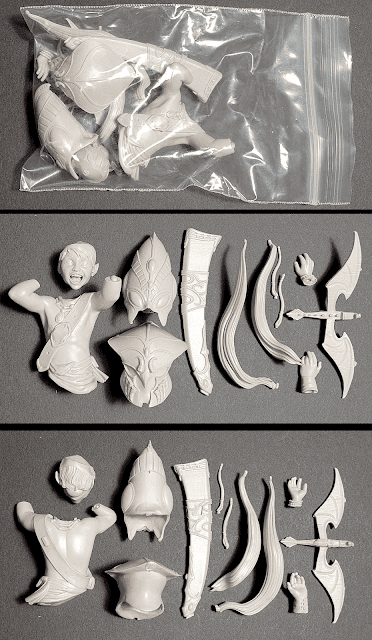 12 parts! Yup...12. For a bust of an Elven child. Seems a little crazy I'll admit but this does have an animated and dynamic pose as you'll see below.
2 parts are options depending on which helmet you want to show him playing with. 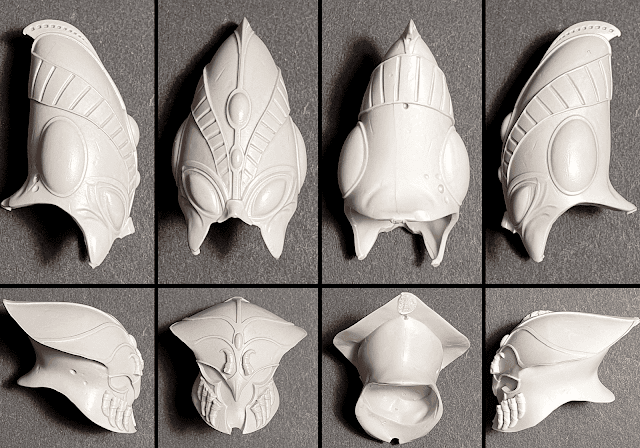 Thought I'd stick with my usual format of working top down. So here are the two helmets.
You can certainly see the Eldar influence in the first helmet. Tall and ornate with what could be a couple of huge soul stones on the sides. But that is where the similarity ends. Slightly more of a bug like look I feel and without any face section. Futuristic but also with a fantasy feel to it which seems to be a theme throughout his growing range. Nice to see something familiar but also different.
The second option also feels a little familiar. Though it would really need some long, rubbery looking dreadlocks to seriously grab that Predator look. Odd to see this one with the eyes, nose, and mouth area filled in. Perhaps some futuristic glass covering. Up to you on that though. I have my own ideas. 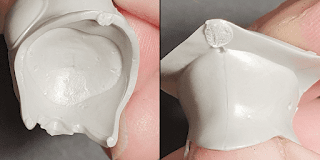 You can see where pour holes and vents have been located away from prime viewing areas. Also, both helmets only look to have the one mould line.
If you hadn't guessed from that; the casting has been done by Ciprian Negut who is certainly a caster doing quality work. 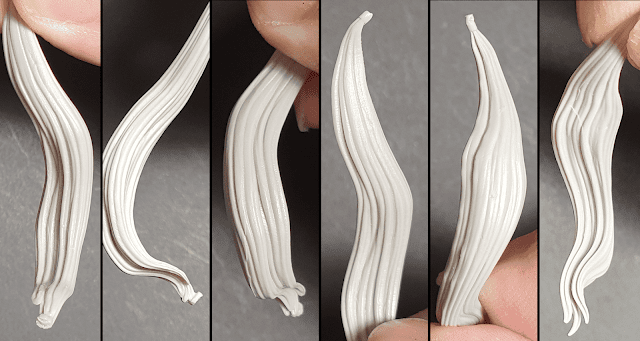 You might have noticed a few holes on the back of the helmets (2 on the bug and 1 on the pred). These are to attach the long flowing hair sections. Or at least they would be if there was a peg which fit into them. This is something which honestly had me muttering some slightly harshly worded comments while testing the assembly. Especially as I managed to snap off one of the bits at the top of the hair where it should join the helmet.
The trouble is, from how I look at it, those tiny parts are unlikely to form a strong and sturdy bond to hold such long hair anyway. Which is a shame. The one bonus though is that if you decide to adapt them so they are secure, pilot holes in the helmets are already there. But you'll have to be inventive.
Bit of mould line cutting across the hair strands in places but that is difficult to avoid. Luckily easy to clean up. 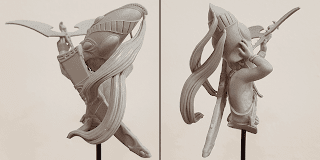 You can see from the shop images what I mean about the tiny connection. Literally a 1mm wide part to hold all of that. Fine if no one will ever go near it.
Something for the sculptor to bare in mind on future sculpts perhaps. Not everyone in the hobby has a delicate touch. Digital is fantastic for creating good, solid connections; as can be seen across the rest of the bust. 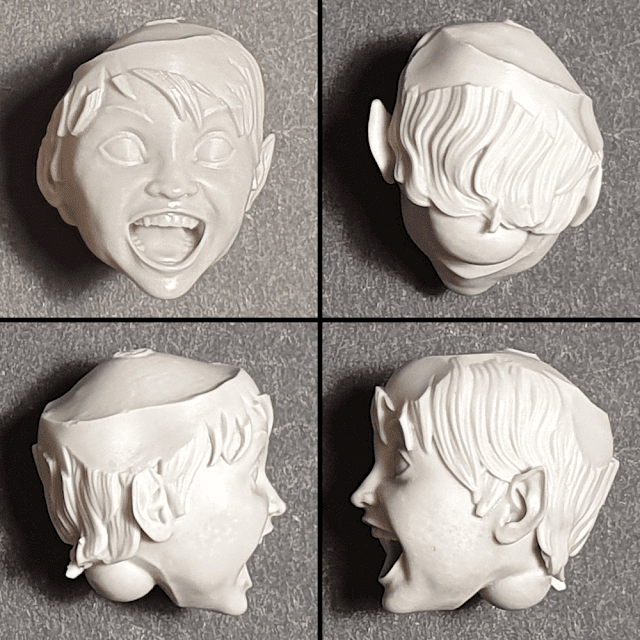 This is easily the section which draws you to the design. Just look at that face!
Joy, youth, and very nearly those huge eyes you find on the more innocent characters in Japanese Manga and anime. Messy hair of a kid who has way more priorities like playing and messing around with older relatives combat gear. 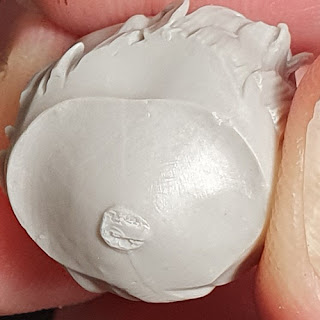 Nicely hidden pour point and the only mould line I could find on this part too. Plus a good example of a digital cut which fits the helmets in place well.
So far so good. 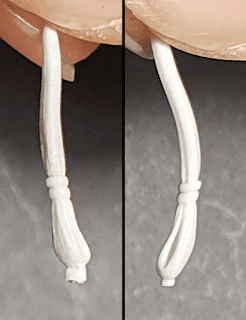 If you noticed in the photo about with all the part, you likely spotted two tiny, thin pieces. these are hail sections which hang down each side of his face.
Pour points to remove and carefully sand at the bottom of each, but be careful. Especially when painting if you have them glued into place. 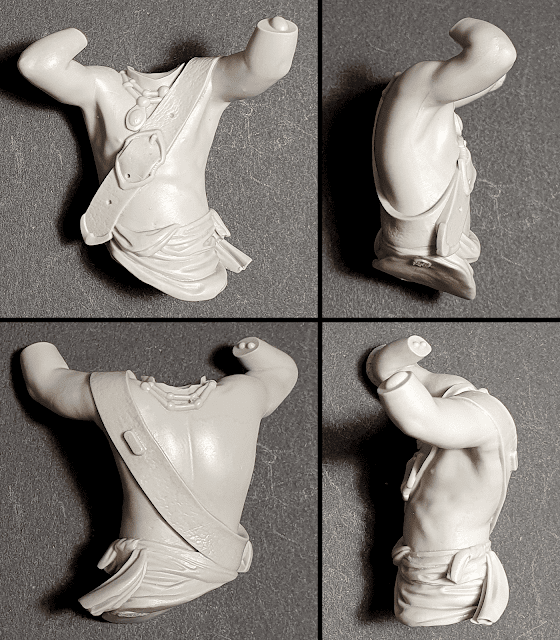 Can't have a bust without a main section can you. Here it is.
Softly toned for a youth rather than the more muscular male busts we're used to which is a good move.
Really nice sections of texture here starting with the cloth around his waist. Lots of folds and creases to paint. Then you have the massive belt and it's cracked leather surface. There's also some areas of metal and jewellery so plenty of different things to play with your paint over.
You can see the connections to the hands and head too. They can obviously only fit a specific part at a certain position too which is what you want.

There is a few bits to mention here.
Firstly the again out of view pour points and easily accessible mould line to clean up. Really finding casting like this to be a treat.
There are a couple of areas which could've been sculpted a little better to match the quality found around the rest of the bust.
First being the necklace which looks a bit soft in places and even looks to vanish into the skin in one place. Luckily the head and helmet pulls the focus from that.
The second is the end of the belt which has a strange lump behind it. It's a shame this part wasn't a separate piece. Could've been digitally cut to fit in without the lump. But it's there and I'd likely slowly and carefully carve it out. 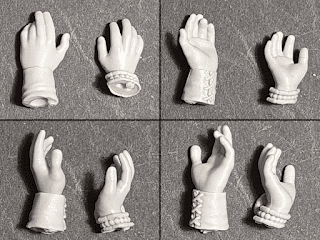 Hands are nicely shaped to with some nice details too. Wrist strap and bracelets. Though no really defined finger nails.
Cuts are excellent and so are the joins to the main body. Makes them really easy to get into place and the joins are tight too.
Little bit to clean up as you can see but that took no time at all. 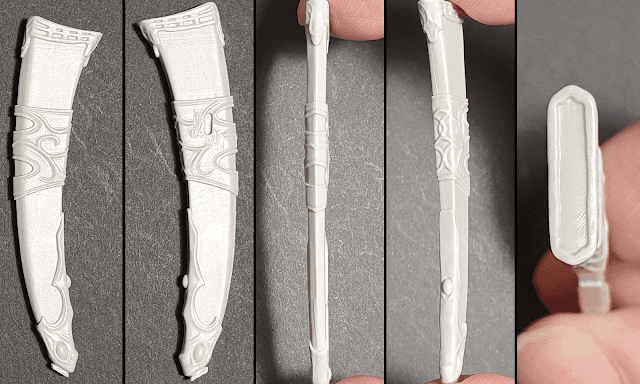 In comparison to the young Prince Elwin, this scabbard is huge. Obviously an older relatives item. Lucky the sword wasn't there too really.
Just makes me think of young kids playing with their parents clothes. Looking ridiculous on one hand but having so much fun that they don't care. Like a toddler wearing their parents huge shoes.
Nice bit of finery here to paint however you like to do your metals.

Lastly there is his wooden dragon toy which ties in to one of the other members of the Elwin royal family (which Normski also reviewed last year). This actually fits nicely into the young Princes hand. Does have a slight Mayan of Aztec feel to the design which is cool.

Yes...it's back and thanks to my lovely wife, without me shaking any miniatures while turning them.
Hope that worked for you. Let me know if there's any issues (although I know the video doesn't show in the email subscription reviews sadly). 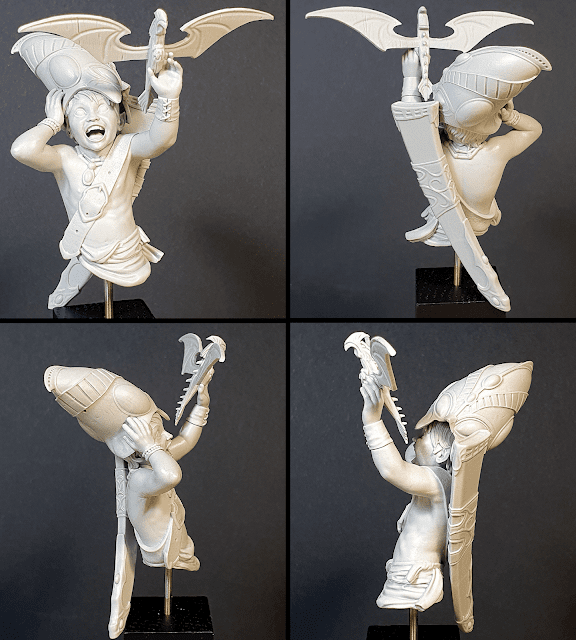 I have to say it. This is easily my favourite miniature in Jamie's range at Dragonhead Models so far. That's not because the others are bad (far from it in fact), but more because it is different and original. There aren't many miniatures I know of which capture a child's ability to just do their thing with a huge smile on their face and in their eyes.
But as I've already stated, it is not without what I see as flaws. There are also some faintly visible print lines in some parts but those who I know who have painted this have let me know that they didn't notice any once primed. Which is good, though the printer should really be making sure it doesn't happen for a paying customer. Especially when home printing is really expanding, although I'm still not convinced that it is rivalling and experienced person with top end equipment. I've yet to be proven wrong on that point of view.
I do love this, even with it's swearing points. Much of that is really due to an excellent original concept. So keep it up Jamie. Just get a bit more focused...if that's possible. 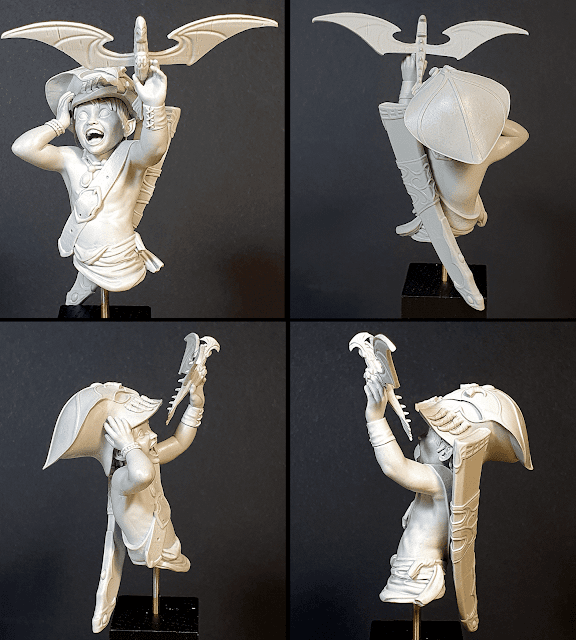 Where can I get Prince Elwin?

Directly from Dragonhead Models at https://www.dragonheadmodels.com for the grand price of £35 plus shipping.
As with almost every company these days you can find Dragonhead on Facebook and Instagram so check those out for sure.
And that is it. First review done and dusted, and thank you for getting this far. Until next time, stay safe and get some hobby time in.