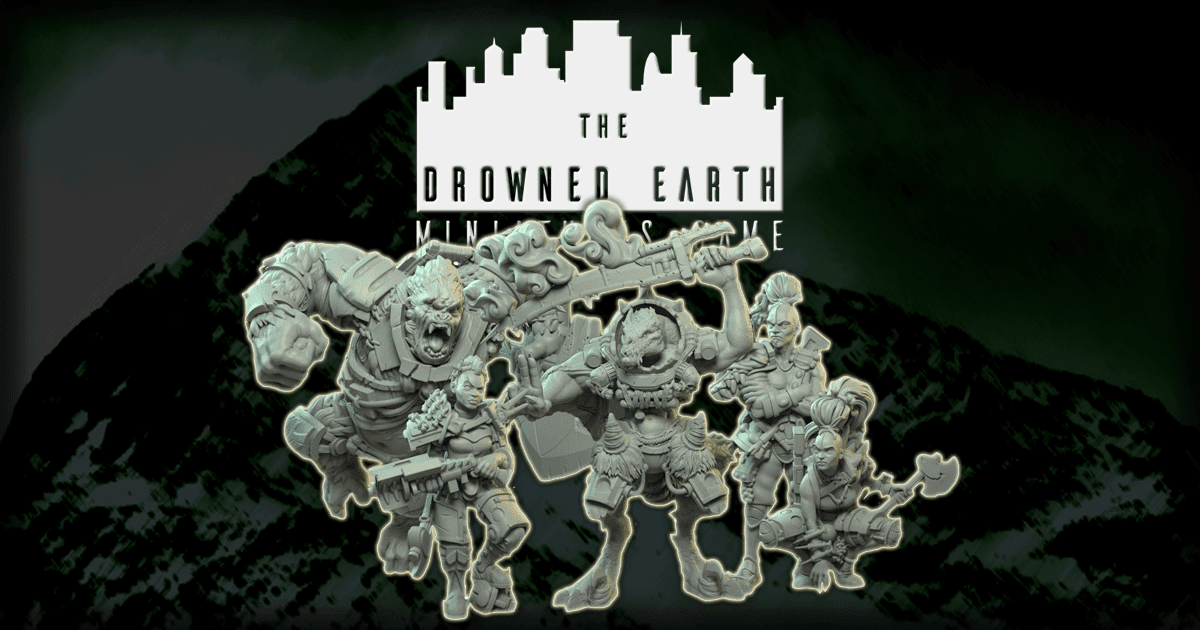 "The Drowned Earth is a skirmish scale tabletop miniatures game where brave heroes and villains risk the dangers of the wilds for glorious riches and ancient technology!"
I met James Baldwin a few years ago at a painting class and our paths have crossed a few times. Each time we discussed getting a review together for his tabletop game and miniatures called The Drowned Earth. But every time, life happened, things drifted, and well...to put it simply it didn't happen. Until now that is.

James has sent me a selection of items from his range including the rule book (which is also available as a FREE PDF download but without the added world fluff. Just in case you fancy a taster of the game system), a selection of single miniatures which come in impressive and original packaging, and one of the faction starter boxes which I thought I would start off with.

In talking with James, I've found that a part of his decisions involves trying to create his products in the most environmentally friendly ways possible. Interesting to actually see a recyclable logo on the packaging here which I've not noticed on a hobby product like this before.
This ethos has also lead him to go for metal miniatures rather than resin. Any errors at the caster can just be melted down again for more casting; unlike resin. 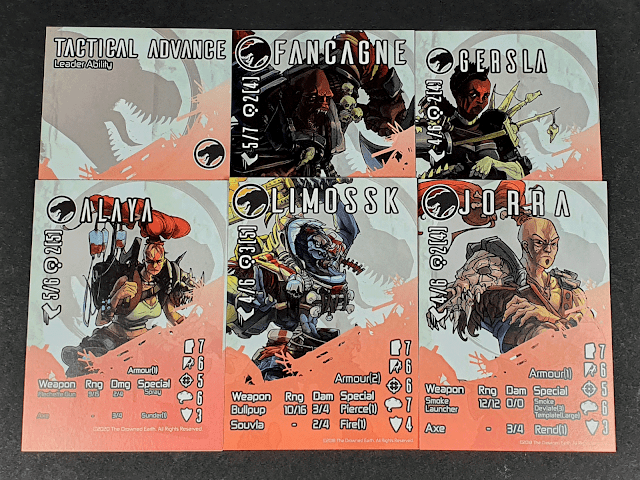 As this is primarily a gaming product you not only get five highly detailed figures but also full colour, double sided cards with those all important games stats and skills. Easy to tell who is who with the card art too.
The Bondsmen faction are essentially hired muscle and assassins. Though they would have you believe otherwise. To quote "A Bondsman may tell you he is part of a great tradition of hunting down transgressors and dangerous criminals, but the truth is quite different. Their only qualification is brutality, martial skill and a complete lack of moral qualms. Officially they are bounty hunters and thief takers. In reality more often than not they are slave-catchers, assassins and hired muscle." 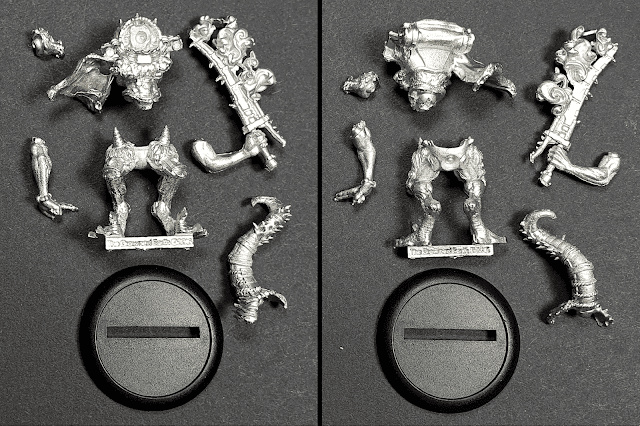 Split into six parts which is the most out of the set.
As you'll see from all the following close up photos, flash and mould lines are minimal at most. I know the mould lines might look quite pronounced in some of the photos but keep in mind that many of them are enlarged. 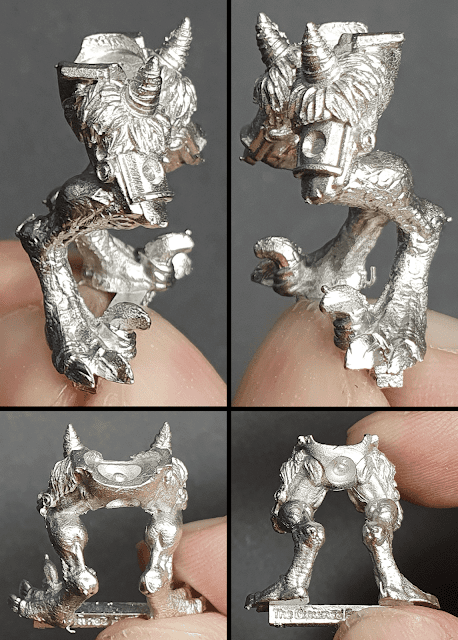 Limossk really has a mutated raptor feel, especially with those claws. This is quite a theme throughout The Drowned Earth with dinosaurs, both with more traditional looking dinosaurs (and figures...yes, dinosaur figures!) and more humanoid versions, called Sorrians.
Can see that the waist cut has been done to make casting more accurate for the details. In general with all these figure, the cuts and joins are excellent and go together really well. This waist however, I had to trim to fit as the upper body was a bit too wide. 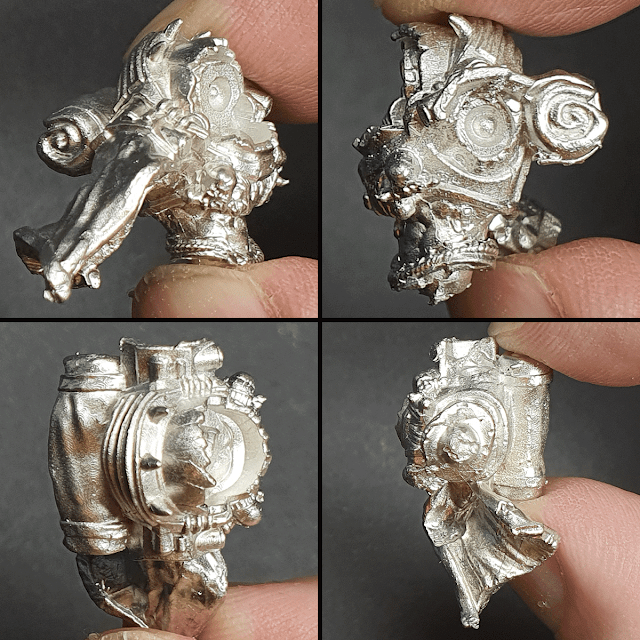 The arms and head all fitted exactly where they should once the pour points were cleaned up. Pretty typical for digital sculpting which really is one of the biggest plus points with the sculpting method.
In the bottom right you can see pretty much the only casting flaw in the whole kit. Luckily it is in a join. After drilling out and a bit of sanding it was fine though. However; I'm pretty certain that if you're more inexperienced with modelling that they would replace the part for you. You can really see the hollowed ball joints (couldn't think of a better term for it) which you find across most of the figures. 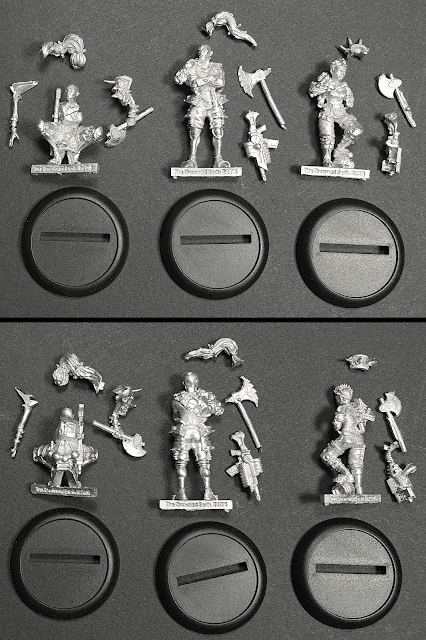 The human trio element of the set. 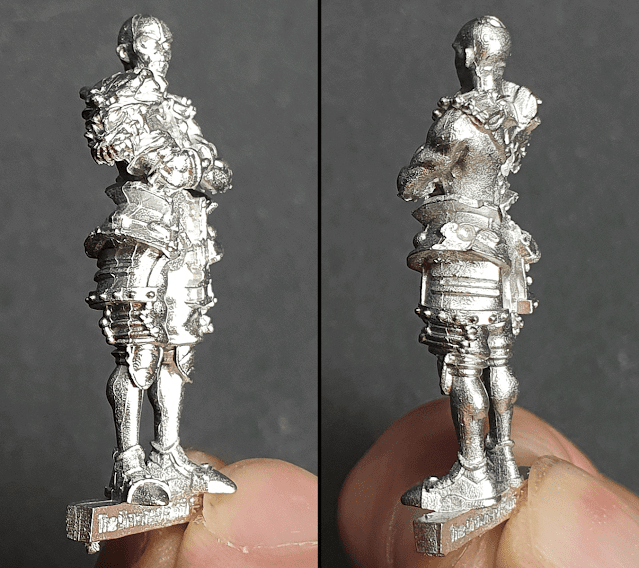 Metal minis really are tricky to photograph I'll admit.
It's really easy to find where parts go on these figures as the joining points are well shaped. Means that if you get them well glued after cleaning then they won't be coming apart during games. 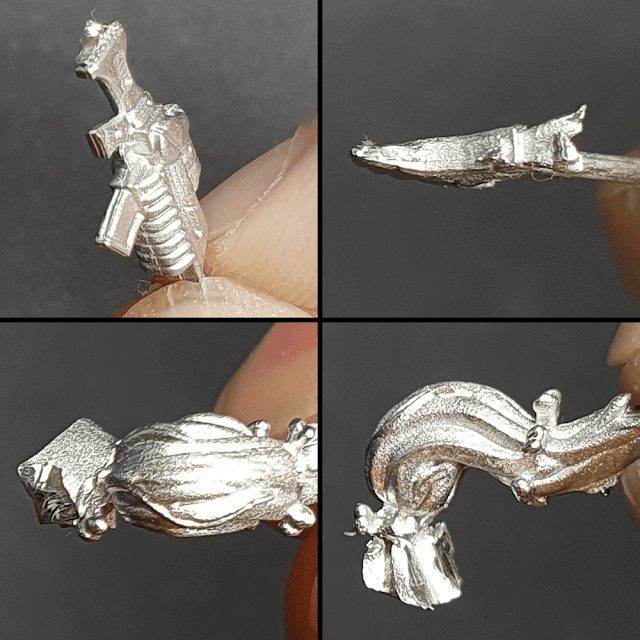 The pour point on the long ponytail is a bit of a shame as it completely covers where it connects to the head. No ball to match the socket there sadly. Will need to be pinned. Though really with parts like this, I'd advise pinning anyway for added strength. 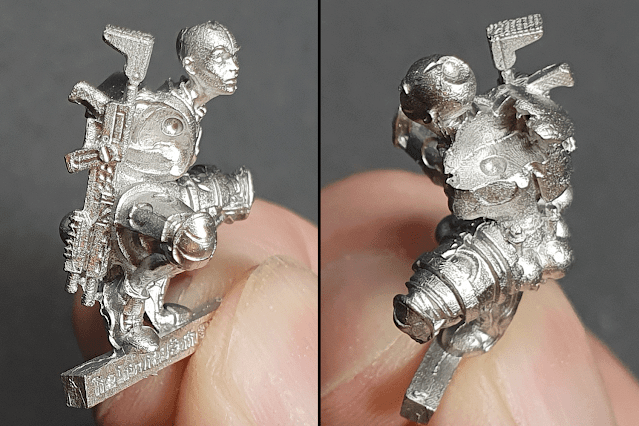 That cut for the right arm is crazy. At first I thought the odd shaped edge towards the back might need some trimming, until I fitted the arm into place. It matches the shoulder skull exactly and creates a great join.
He right arm sits well into place too which ends up being creating an impressively posed figure. The hair this time has it's ball connection but I would still pin. That's a lot of hair for a small join. Does look good though. 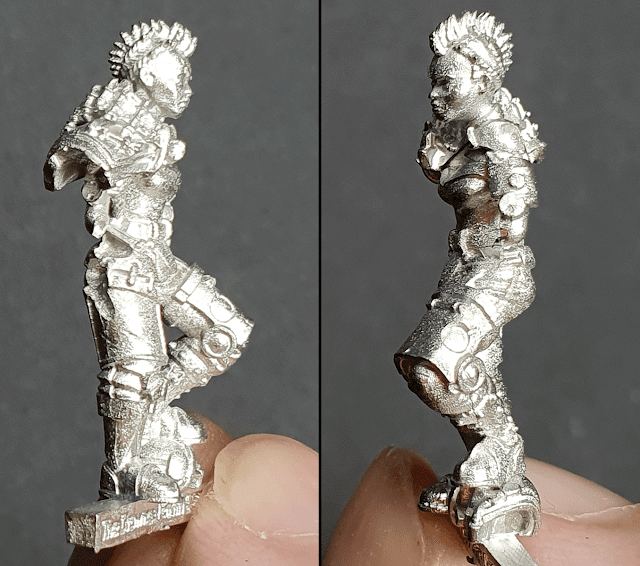 Gersla needed a little surgery to get her arms to sit where they should. There was a little rectangle of metal which I feel may have been an unfinished cut on the part of the sculptor as there is no slot for it to fit into on the right arm. Shame though as that would've created an awesome connection point.
Not sure if you've noticed but the design style of the female figures from this set and indeed the rest of the range is sensibly done. No silly combat heels or bikini armour. Just badass ladies who won't take any crap. 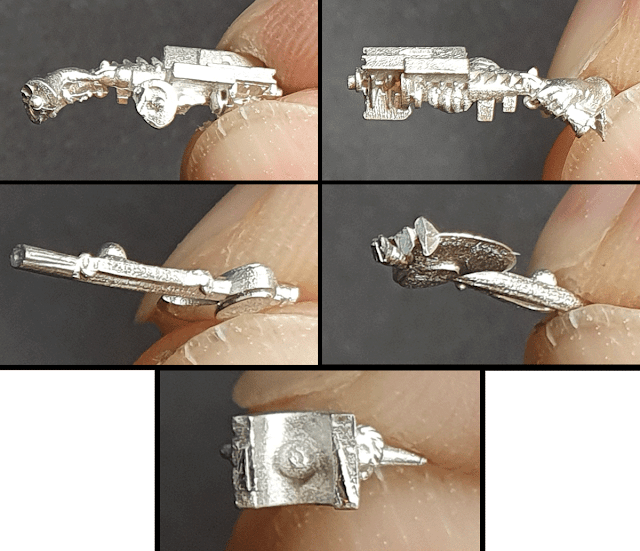 Like I said before; bit of clean up here and there but nothing unexpected. 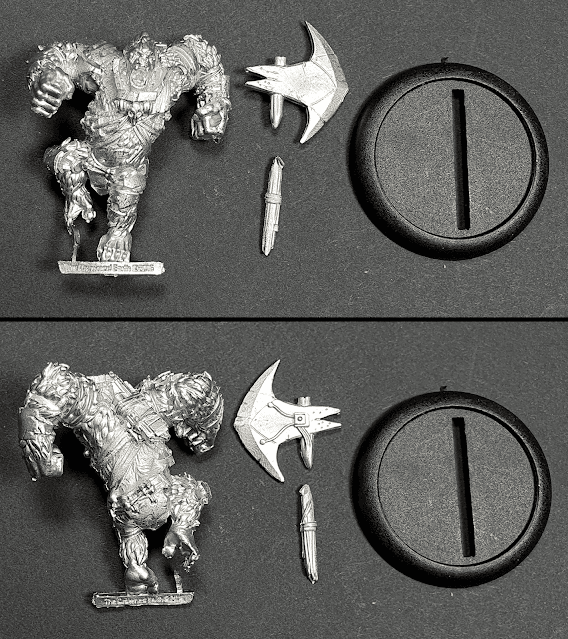 Classed as 'tough', Fancagne is a serious lump of metal. And this one is an aggressive beast, both as a figure and in game too. I'd easily guess that King Kong was used for reference at some stage.
In this setting they are known as The Berengeii. 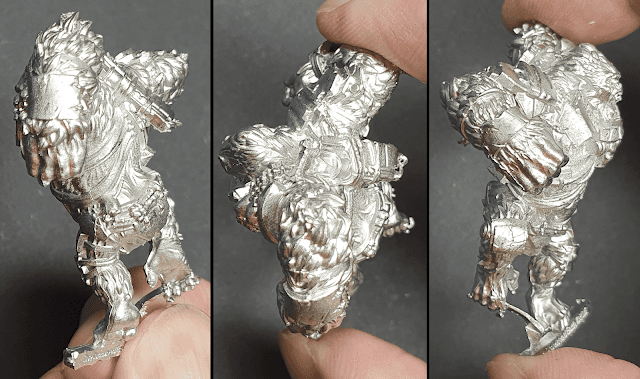 Bit of clean up needed around the undersides of the hands and right foot but in general nothing major at all. Will need some good glue to keep him in his base slot. Possibly some filler added for more connecting surfaces as there's a little gap. 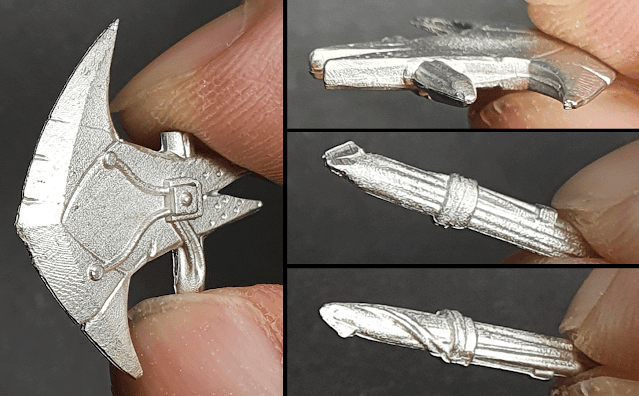 Both parts of his axe fit into place quite well, especially the axe head which I only pushed into place for the assembled photos.
You can see some ripples from the 3D printed master on the blade. Generally those are really shallow but easy to sand on that section if they do bug you. 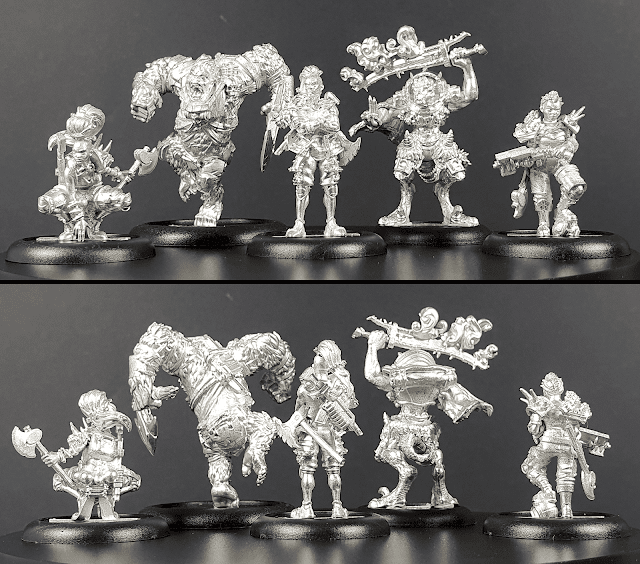 This whole range and setting really has it's own character. Each figure really is an individual; okay, maybe not so the beast in the range but those are dinosaurs and cool by default.
From the perspective of a modeller and painter, there is a lot to be said about the high quality of sculpting and casting. If you're ever tempted to creates something with a post apocalyptic and jungle like then definitely check out this range. Can really picture plants taking over from a destroyed urban setting.
£41.95 for this set is pretty good too for five high quality white metal figures and cards needed to game with them at a legal 100 point force straight out of the box.
You can expect to see a follow up to this first review soon. 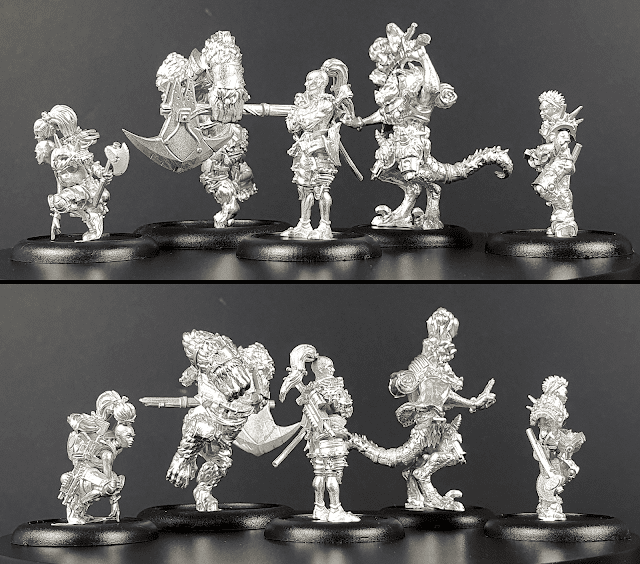 Where can I buy?

The Drowned Earth is based in the UK and can be bought directly at https://thedrownedearth.com
You can follow them on Facebook to keep up with releases, tournaments, and other goings on.
So that's it. My first look at The Drowned Earth and what has turned out to be a set of pretty cool figures. In the follow up to this I'll be showing you their alternative to the classic blister pack which I may have gotten a little overexcited about. Until then...stay safe.