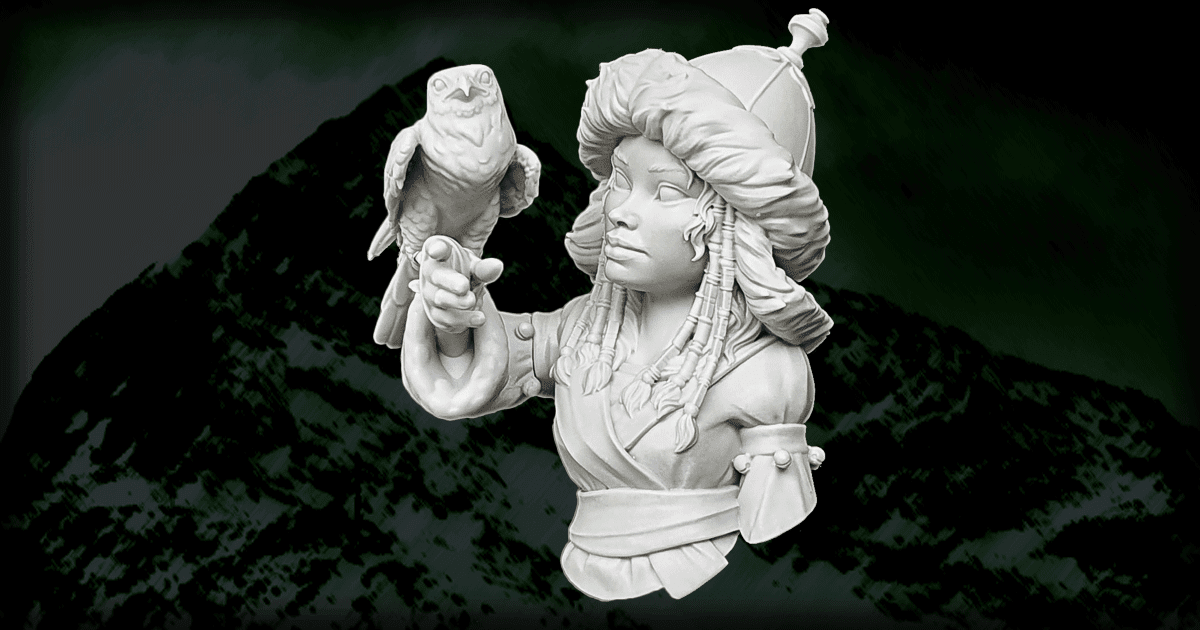 Black Crow Miniatures are becoming quite a regular thing here at GMR. Yes, it is true there has been a couple of releases between the excellent Hlin Dwarf Shieldmaiden figure and this new bust. But we can't review every release from a company. But the new Kuri was just too good to miss taking a look over.

Giving more of a nod to one of their early releases called Tenzig who was a Mongolian looking hunter which I believe was a halfling (I may be wrong on that last part). This was pretty popular and I remember seeing quite a few painted which is always better than being in a grey 'pile of opportunity' (not a term I can claim to have created, but it's miles better than the classic 'pile of shame').
This time around we have a female character in the form of Kuri who is obviously a bit good with animals. Especially as you get a choice of falcon or dragon to model her with.
Concept art is from the hands of Guillermo Gonzalez who is a regular at Black Crow.
However; sculpting duties have been done by a relatively unknown within small scale miniatures, Elina Karimova. I know she is working on something for someone I chat with a lot and I've seen some work in progress pics. Frankly I can see Elina picking up more sculpting work but go take a look at her Artstation profile for previous stuff too (especially her monkeys).
Box art is the work of Marc Masclans who has really done a beautiful job of creating different textures and breathing life into Kuri. But that's really expected of Marc with him being one of the top class painters in the world. 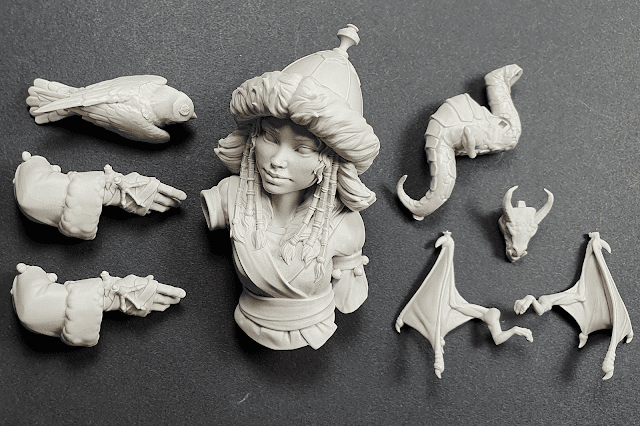 Eight separate parts make up this bust but you have a choice to make. You either go for the:
Now then... the sharped eyed of you may have spotted that both of her arms are exactly the same and... erm... yeah; this is a mistake. But being as this is a sample copy sent to me for the purpose of reviewing I wasn't phased. A little disappointed I'll admit as the previous four experiences I've had with Black Crow have all been excellent. So I felt that from the perspective of a paying customer I should ask how they deal with mispacks or perhaps the dreaded faulty parts (we've all had that at some point).
So after a quick message to their page on Facebook (you could also contact via email or Instagram) along with a photo of what I had received and... 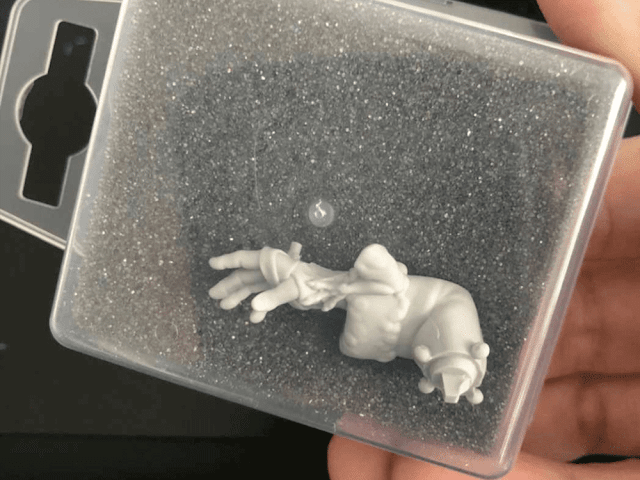 ...boom! A photo of the part needed and it was posted the next day! That is just spot on customer service and I really can't stress enough that if you ever have a problem with a purchase that all you should need to do is get in contact. Be polite (mistakes happen now and then after all. We're all human at the end of the day) and give them time to respond as many of these companies are often side jobs for those involved. No need to jump on social media for a rant... unless of course... well, erm.
Speaking of postage too; this was sent from Spain to the UK. Many companies are worried about doing this because of the new (and confusing) VAT system with the UK so it was a bit of a tester to see what might happen. Basically it took just five days to get to me with the customs label clearly filled out and no extra unexpected charges. But this isn't always the case as something I've had from Germany took six-ish weeks. Go figure. Hopefully things will level out for buyers and sellers asap.

Casting I believe is by Cipri Miniatures Production and as usual the quality is top notch. Details are replicated beautifully. Check out the bells on her arm and the cloth folds.
Looking it over and you notice that the fur isn't sculpted in a huge amount of detail. More like shapes and waves giving the feel of hair groups and direction. Hair can sometimes be really intimidating to work your brush around fine strands, but it can also end up cartoon like when it's left like ribbons. This is a nice medium between those. Giving enough to work on for those with experience while not scaring more novice painters. Good choice.
My only niggle with this, and I often find this with digital sculpts, is with solid shapes looking cut through. With this it's the beads and her hair. Mainly towards the ends where they lay on her chest. That is literally my only quibble with the sculpt though and compared to others sculpts I've seen around, this is minimal at most. 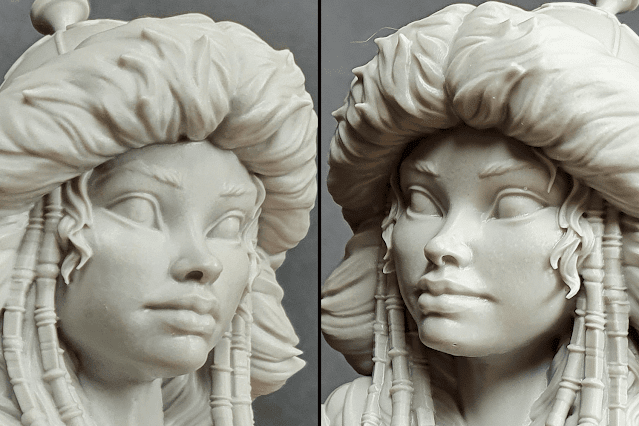 Every miniature needs focal points and the main on is usually the face. Frankly I couldn't resist zooming in and showing Kuri's face with those huge eyes and small areas of hair framing her.
Even her eyebrows have some shape to them, although I think Masclans may have removed the sculpted eyebrows for the boxart. What do you think?
Plenty of shape in the face structure to paint and a hint of the iris in her eyes too which may help when painting. 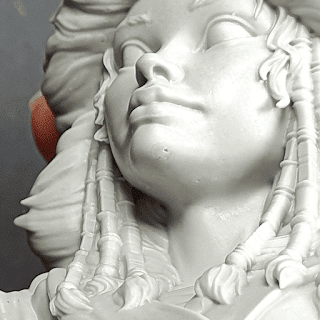 I found one!
A bubble that is.
Don't forget that this is really zoomed in but I don't remember ever spotting even a tiny hole from a bubble in a Cipri cast so I'm celebrating this on. Tongue in cheek of course because this isn't really a big deal and even paint would cover it over.
But it made me smile because I'm odd like that.

Quality wise...
Single mould line straight down the back, underneath through the pour holes, and ends at her belt. Simple to clean too which I always like.
But... on her helmet are some print steps. Which is a shame. Especially after the Hlin figure was so perfect and the rest of this bust is so well printed for the master copy. I did sand this down carefully but perhaps a few passes of a Milliput wash first would help. 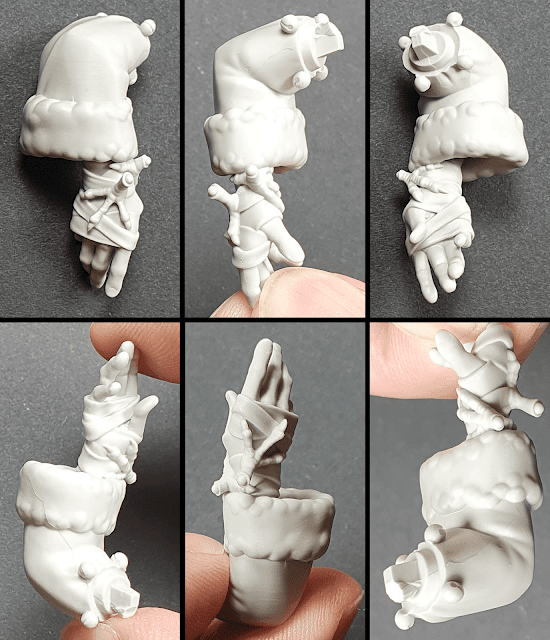 I can only show you the arm for the falcon as the dragon arm is somewhere on it's travels.
Great details on those talons, hand strapping, her hand, and well, everything. The cuff really gives the feel of a really soft and fluffy fur trim. Good to keep Kuri warm.
Oddly this part looks to have four mould lines which puzzled me. Perhaps it makes demoulding those details more reliable. Pour point is at the join to the main body though so 100% hidden once trimmed to fit.

More of that implied surface detail rather than hyper detailing. But there is no denying that the shapes, positions, and angles just look spot on. Really pushes the focus to the falcon's face with that great hooked beak and hunters eye.
Mould line was almost non-existent and you can clearly see the pour point is easily accessible for cleaning. 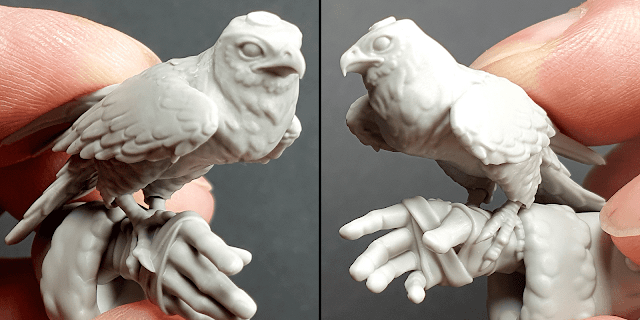 That cut though from the arm. Seriously Elina, that is a fantastic connection.
The legs look like the fine feathers are going over them and the tail rests so well on the arm but without the common indent you often see. I really hope to see more animals sculpted by her. 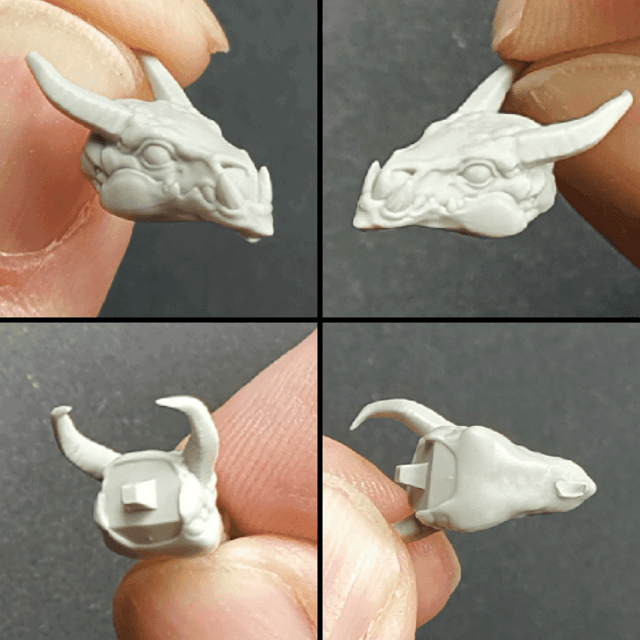 And speaking of which... here is another in the form of a more fantasy classic. A young dragon. Kuri must have a seriously strong arm.
The face is almost cute (though not on Kuri's level) with huge eyes hinting at a young creature.
When attached to the body section, that slight lip around the flat join section does a great job of covering the connection. Reducing any need for filling. And clean up is a fine line along the jawline and a bit of left over peg under the chin.

The dragon's body has a good shape to it and hasn't just gone down the route of being covered in thousands of tiny scales. You can see large, dinosaur like plates running down the back and underside which is a nice variation to how we often see dragons.
Cleaning wise you can see the single pour point on a solid part of the tail. Simple to remove and clean with some trimming and sanding. Mould line wise, there are two running up the sides of the tail and body. Easy to get to for the most of it. Just have to be a little careful between the leg and body.
The joining points are well defined with zero issues with assembly in the slightest. 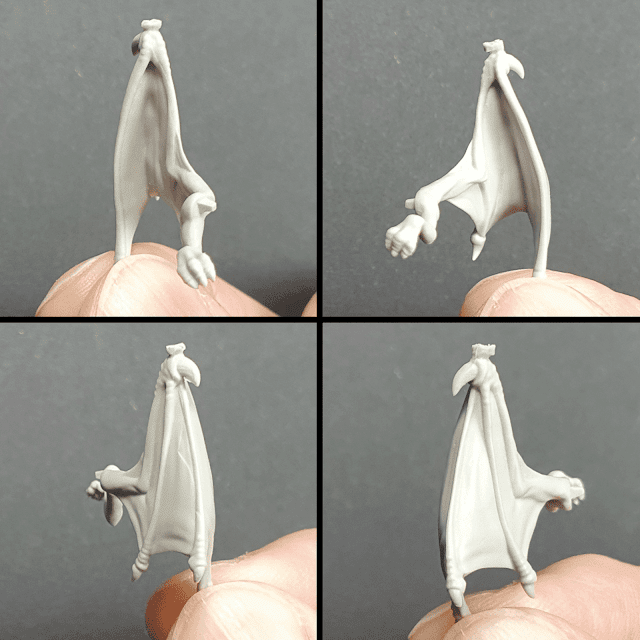 You can see the quality and what needed cleaning on the wings so I don't need to tell you that this whole kit is easy to get to a high prep standard which is always a welcome sign. I'm happy to sit down and slowly clean and assemble a kit (yes, I'm odd). But it really isn't something that many people like to have to do. 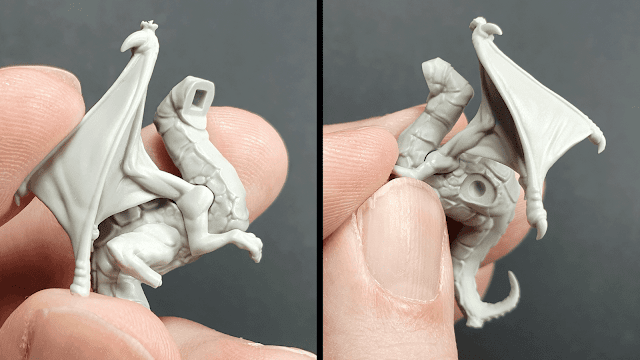 As you can see it assembles really well. A little pva or putty will blend those parts in really well and the gluing points just fit excellently.
I wish I had the arm so I could show how it connects with the back legs as I reckon it's spot on. I'll look to add an update when Royal Mail delivers.

If you get the emailed subscription version you won't have the video shown but you can find it on YouTube via this link: https://youtu.be/rSiKV1_cYqU
I'm still trying to improve these and hope you find them useful. 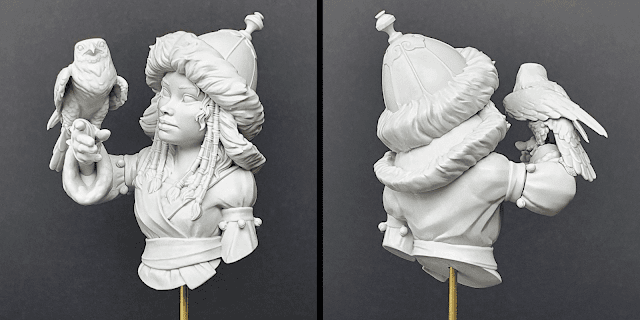 I'm not sure if it's my age or a slight shift within the hobby but I've really been loving seeing miniatures which don't have a combat based setting or feel. Kuri really hits that feeling right on the head. Elina has really done a fantastic job taking the 2D concept art (which Black Crow has also shown so go look at their social media as it's great) and creating a digital 3D bust.
Textures and materials are well created without feeling intimidating as an average painter. You've got cloth, different furs, metal, feathers (or dragon skin), and that brilliant face with her huge eyes. And there's no denying that connection between Kuri and her animals. The bond and angle it's been sculpted at is borderline perfect.
I'm really looking forward to seeing Kuri painted by different people as I feel she has a wide appeal, though I may be biased as I love it. 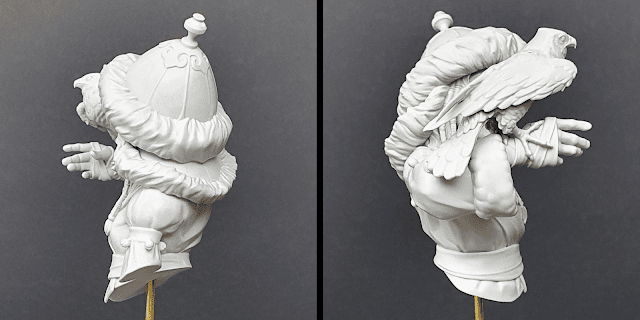 It came! The mispacked arm was sent of course and arrived within another five days which for international postage during current times with COVID, Brexit, and questionable ferry captains (okay, maybe not that last one). But I felt the dragon option needed to be set up and shown.
So here it is in the whole blutacked glory. 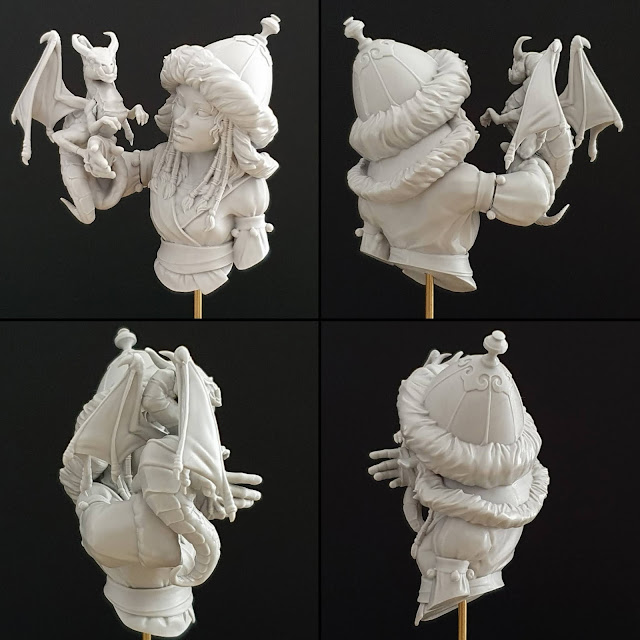 Where to buy Kuri?

Directly from Black Crow Miniatures for 38€ + VAT via https://www.blackcrowminiatures.com/product-page/kuri or from official stockists depending on your location.
To keep up with Black Crow Miniatures news you can follow them on social media on Facebook and/ or Instagram. I know they have more coming later in the year including one I spotted the art for in their teasers which I'm looking forward to seeing.
Until next time, take care, stay safe, and happy modelling.