In my years in this hobby I have collected many different pieces and genres but I am finding it increasingly difficult to find quality miniatures. With the growth of generic and TV show/movie related sculpts I have strived to seek out the best original pieces on the market today.

I have known about Carmine for some years now but only as a sculptor for other companies, the Van Helsing bust for instance.

But while surfing Facebook I saw Carmines piece 'The Slayer' which I will review later.
While I was looking through Carmines images I saw he also was the sculptor of the 'Old Druid'.

I didn’t know this was one of his pieces; I have seen it at many shows and always thought it was cool. So I purchased both and they will get reviewed in time.

But this review is for Wukong which Carmine was working on at the time I purchased the other two busts.

Wukong is sculpted in 1/6 scale and comes at the very reasonable price of €40 and was shipped via courier. You can see Alas from BrokenToad next to Wukong and her scale is 1/10 so you can see the size difference between the two. 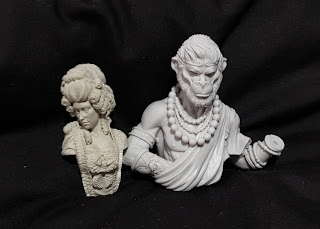 I just want to say that at this price at 1/6 scale is amazing, when you see much smaller pieces at much higher prices and that just blows my mind. I know the costings of producing miniatures and some prices are pulled out of the sky.

Wukong is amazing value as it comes direct from Carmine sealed in heat seal bags so no pricey packaging to add extra costs. So yes a total bargain. 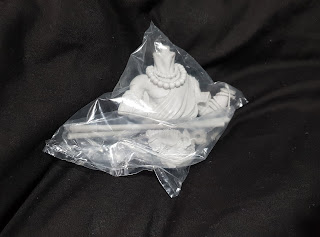 The bust comes in two bags; one smaller bag inside to keep all the parts together and then a main bag for the whole bust. Inside the bags there 6 parts. Head, torso, hand, 2 staff parts and a platted hair piece.
Wukong is based around the 16th century legend of Sun Wukong or the Monkey King from the ancient Chinese novel “Journey to the West”.
The Monkey King has since had many tales written and TV shows made and there are now several different adaptations and miniatures of Wukong. This bust is now my favourite of those adaptations.

So the quality of the bust isn’t perfect. The casting has left 2 mould lines. One up the right side of the material around the waist and one on the elbow of the staff arm.
Fortunately they are not detail destroying and will take just a few minutes to remove with a blade and buffing sticks.

I am not usually a fan of casting the head separately as the neck joint requires more work and if not filled and sanded correctly it could look unsightly. However; there is lots of fur and detail in the head it and it would have been a shame to see a mould line through it.

This iteration of Wukong is sculpted in the traditional sense of the monkey faced Wukong which appears in most movies and books. But, the head band looks very much like the one on the 80s TV show Monkey Magic.

The Outfit is designed like a Shaolin Monk's robe. This we do not see often in imagery of Wukong as he is usually covered in some kind of  armoured suit. He is not however totally simean as his torso is smooth like the average person.


The details sculpted into the wrist bands are very cool. Ornate like 16th century art you see on ancient architecture and monasteries around china. All this detail and quality sculpting make this bust one to check out and seeing it painted and in competitions will be very cool indeed.

So aside from the slight casting issues this bust is an all round lovely piece. It will take more than your average preparation time but once this is together it will look really nice.

If you would like a copy of this bust you can message Carmine directly on his page at https://www.facebook.com/thor.creart or via email at giuglianocarmine@gmail.com

Keep a look out for more sculpting from Carmine and check out what he has done previously.
Written by Normski on Monday, June 10, 2019
Email ThisBlogThis!Share to TwitterShare to FacebookShare to Pinterest
Labels: 1/6 scale, 2019, Bust, Fantasy, Monkey King, Resin, Review, Thor Creart, Wukong