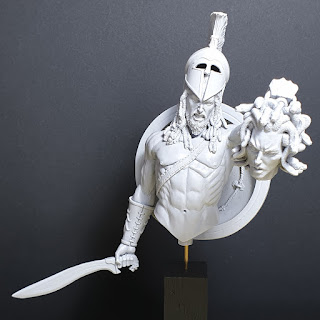 Fan Art Models launched in 2017 and have built up a current range of thirteen busts. One of just a few companies I can think of coming out of Russia but they are available in a variety of stores around the world.

I decided to take a look over their Perseus bust as the character and the creature, Medusa has always been one I have heard of thanks to the old Ray Harryhausen 'Clash of the Titans' film. 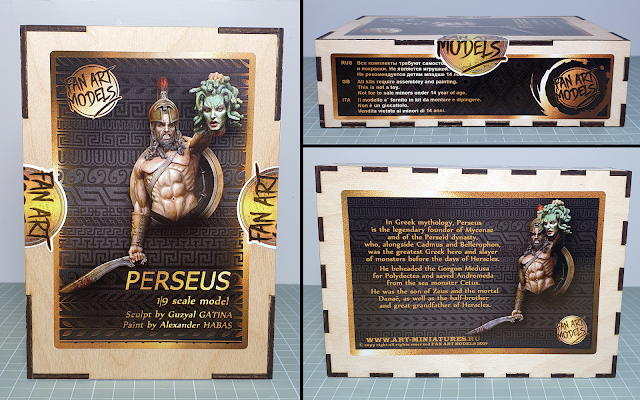 When the package reached me in the UK all the way from Fan Art Models themselves I was pleased to see that the box was wrapped in a layer of packing foam to protect it. And I'm glad it was as I was greeted to the above wooden box with full colour, glossy labels showing the box art, information about the bust, some details about Perseus, and the names of the sculptor and painter.

Guzyal Gatina is the lady behind the sculpting work on this large, 1/9th scale bust, and I'm not really knowledgeable on her other work so it's good to find people I'm not familiar with.

As for the painter; Alexander Habas. I've known him for a few years now and have seen him grow and develop into the box artist he is now. 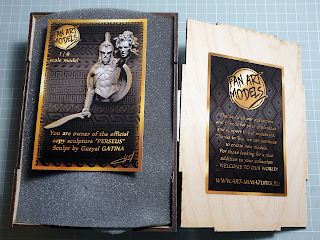 The box is sealed with two stickers and inside as I opened it was a nice thank you label and a card stating it is an official copy. 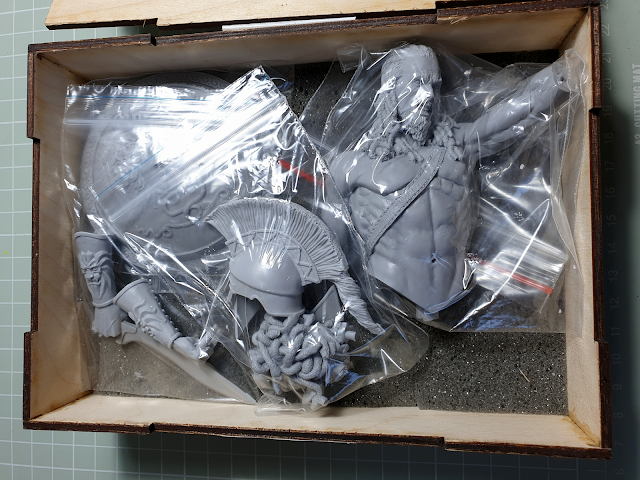 I honestly wasn't prepared for the size of this. Probably because I'm more used to smaller scale busts of ones that don't include as much of a person as this does. And the shield on his back is huge.

What I did sadly spot though was a snapped part on the helmet. Luckily the piece was still in the zip loc bag and looks like a clean snap which are usually an easy fix. Though as with most companies, I'm sure Fan Art Models would replace the part for you if preferred.

Seven parts in total. Including a rod to attach the shield into his back which admittedly feels a little odd in my mind as I'm pretty sure that the rope you can see on the inside of the shield would be used for carrying when not in use. Artistic creativity I suppose.

Left over pegs from casting all look to be in locations that join to another part so clean up should be pretty easy.

The design and sculpt of this bust has meant I've looked at is a few times. It has areas which are fantastic, like the hair in the photos above. Not a style often seen in miniatures and especially not so well defined. 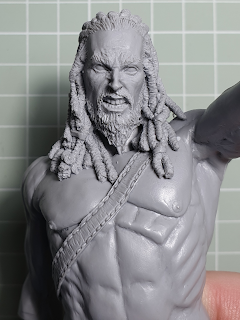 The face I'm also drawn to with it's angry features filled with triumph.

However... the biggest area that doesn't sit quite well with me is the anatomy. In particular the look of the muscles. And I'll like to address that now and get it out the way.

He's ripped. As in serious athlete or body building looks. But I'm not sure what references were used as there are parts where muscles are not pulling the right way. The pectorals being the biggest examples. And there is even a row of six muscles above the abdominals that don't exist.

I don't want to get down on someones work, especially as there are areas I really like on this bust; but a bit more research and reference images could've helped really take this whole piece to another level entirely.

Another example of a great attention to detail is that belt which runs across his torso. Now I'm sure it isn't for his shield so I'm guessing the thinking is more to hold his scabbard and to break up the mass of flesh with a different texture to paint. And it has great texture both across it and in the stitching.

Now then... the gorgon's head. Or as she's better known; Medusa.

Alexander made the box art look like there is scales sculpted on her forehead. And... there isn't. That is a good thing in my eyes as it leaves a choice to the person painting it.

I have only one thing to point out which confuses me. Snake noses. They all look to have a squared off front to their heads and nostrils. I would likely take a knife or file to those a give a more rounded look to them because apart from that I love the Medusa head.

Those snake bodies all coiling over each other gives them a life of their own. And her face seems part confused at what has happened and also still angry. Can even see her fangs.

The internal muscles in the neck look great and the peg was easy enough to remove too. In fact, cleaning this whole bust was pretty simple as any excess to be removed was easily accessible and mould lines were easy to scrape off or sand. 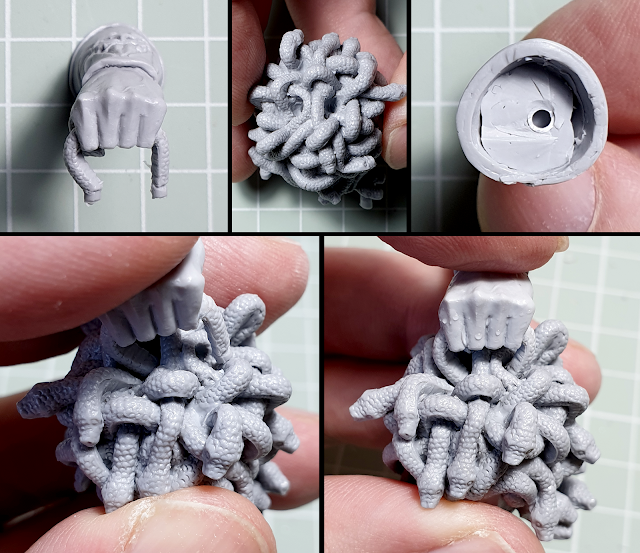 Now the way this bust fits together is excellent for a traditional sculpt. Lots of solid connections and easy to locate key and hole joins.

The only one that needed work was the hand holding Medusa's head aloft. That needed a slight dip in some hot water from the kettle and a press into place. Job done. 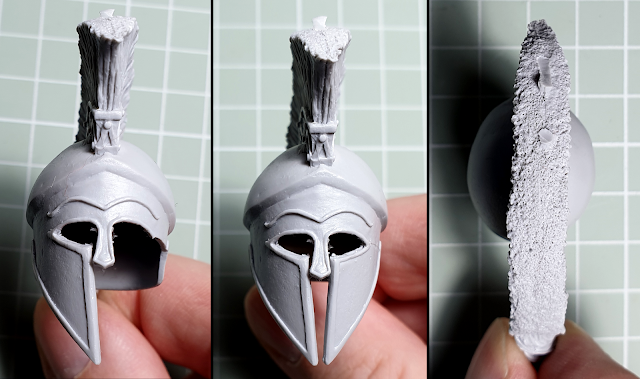 And the helmet. With it's snapped part.

Like I said, it was an easy fix and I could even add extra strength to it on the inside if I so wished as it rests on the top of Perseus head like a classic Greek hoplite look. Though I'd be tempted to leave it off rather than cover up his well sculpted hair. Even paint and display the helmet as a completely separate miniature perhaps.

It did need some cleaning up on the top of the crest as this is where the pour hole is located. Bit of trimming with a scalpel and then using a pin in a hand drill to press in some more texture sorted that out. 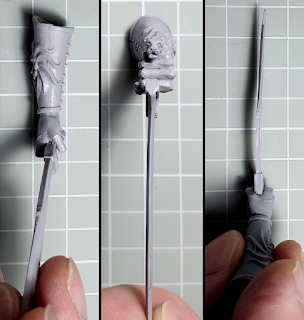 His left hand and forearm have a slight mould line along the sides which wasn't difficult to clean up at all.

As you can guess, the join is hidden by the armour so no gap filling is needed at all.

His kopis falcata sword is excellent. Great shape to the blade and pretty straight cast too. But it's the head on the handle (middle picture) that stands out and makes it look a bit more fancy.

Also, his hands are well sculpted too, especially with the fingernails and knuckle definition.

That shield. Huge and seriously well designed and defined. Though the way it attaches almost feels like an afterthought. A simple peg into the torsos back leaves it feeling quite disjointed.

I'd also say it's a shame to hide something so well done at the back of a bust which has such a strong and obvious front facing. It would be tempted to fill the back of the body in with some putty (which would give a more solid part to place a rod into) and use the shield on the front of the plinth and really show it off.

Hopefully you can see what I mean in the video.

Whist there are a few anatomy issues on Perseus, there is more than enough excellent touches and focal points to really give you a project to get your teeth into. And with the helmet and shield almost feeling like optional extras (and great ones too), it would be interesting to see how different painters would choose to display Perseus.

The resin is excellent as is the casting quality. And the presentation of the package does show and extra level of thought put into a product. 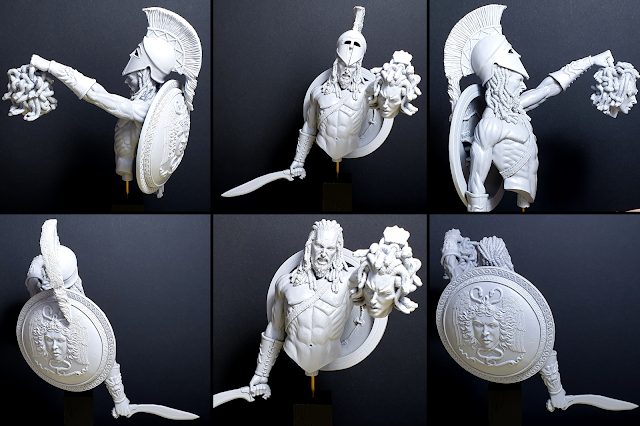 If you want to see more of the Fan Art Model range the or purchase the Perseus bust, check out their website.

Hope you're finding these reviews useful then please feel free to share around the interweb and say hello if you see us. We don't bite unless you're covered in chocolate.
Written by Steve Haydon (Forté) on Monday, December 09, 2019
Email ThisBlogThis!Share to TwitterShare to FacebookShare to Pinterest
Labels: 2019, Bust, Fan Art, Mythological