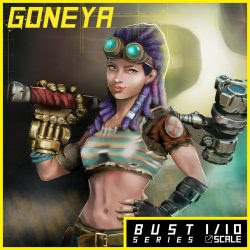 Back in May 2018, Marco Riolo released Dafne 2220 under his Alternity Miniatures brand and at the time I was looking for sci-fi females to do a display of an all female crew, and Dafne was perfect. This was my introduction to Alternity Miniatures and I have followed them ever since.

I am quite a big fan of post apocalyptic miniatures and their 1/35 scale range is perfect for dioramas and vignettes.

Following the range over the past year has seen some very cool releases. Then Marco launched Goneya which is a double bust limited edition set and perfect for the sci-fi female crew project so I instantly had my eye on this.


Marco and I had a chat at and after SMC'19 (Scale Model Challenge 2019), and I brought home a copy of the limited edition set.

Grey Mountain Reviews do not usually review limited edition model as they are usually all sold out before we get a copy if we actually manage to buy one. But from time to time they appear and need to be discussed. Goneya is one of those.

Not only is it a really nice miniature, but it has an important message inside the box.

Each copy comes with a certificate of authenticity. 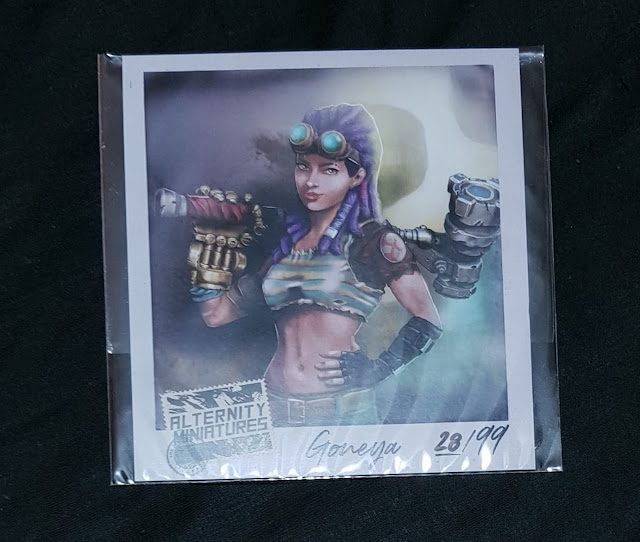 Now this isn’t unusual you may say but what it does signify is a very big struggle all producers have in the hobby and that is recasting. Marco has been targeted by recasters (as have many more producers across the world).

GreyMountain Reviews strongly opposes recasting and if you support recasting in any way YOU are part of the problem.

So, in the box is a certificate with the number of the edition which is all very standard and on the reverse of the clear envelope is a sticker that seals the flap that says “Guarantee”. 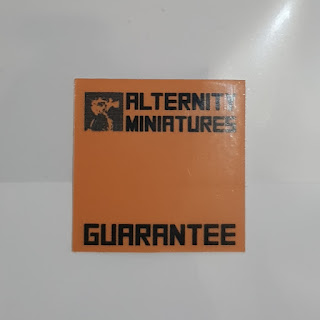 Now this may not be a high tech way to rid the world of recaster scumbags, but it does show that you have an official copy. If you bought a limited edition box without a certificate then you have more than likely purchased a counterfeit copy.

This means two things...
you have supported a recaster (possibly unknowingly) which can threaten the operating costs of Alternity Miniatures, or..
you have been given or sold a copy from a friend which is all very innocent and fine as we all often give away or sell some of our stash.

Like many producers out there, Alternity Miniatures are doing their part in a fight against recasting.

In this community there are many members who are against recasting and these are the ones supporting the hobby with integrity and honesty. But there are way too many who still buy recasts and this is fuelling the need for recasters all over the world. This is very wrong on many levels and it proves those who buy recasts are only in it for themselves. They don’t care about those who put the hard work and graft in to producing those miniatures they want so badly but are not prepared to pay the original prices.

REMEMBER... miniatures and busts are a luxury; not a necessity.


Now; with all that being said it is time to take a look at Goneya. 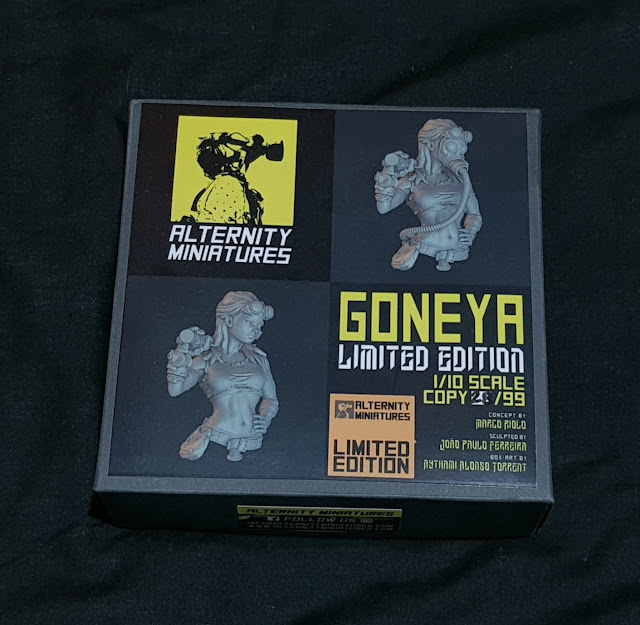 On opening the box there was the numbered certificate with the printed artwork for Goneya which is a pretty nice piece of concept art for a miniature. 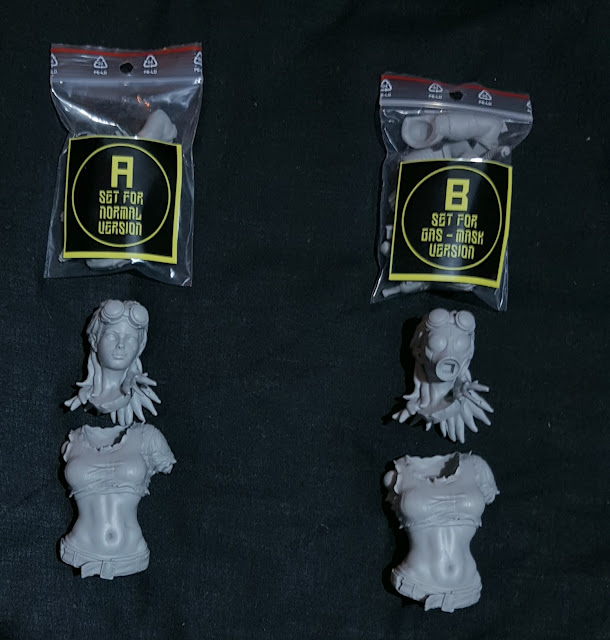 In pack A you get all the parts to complete the unmasked version fully. 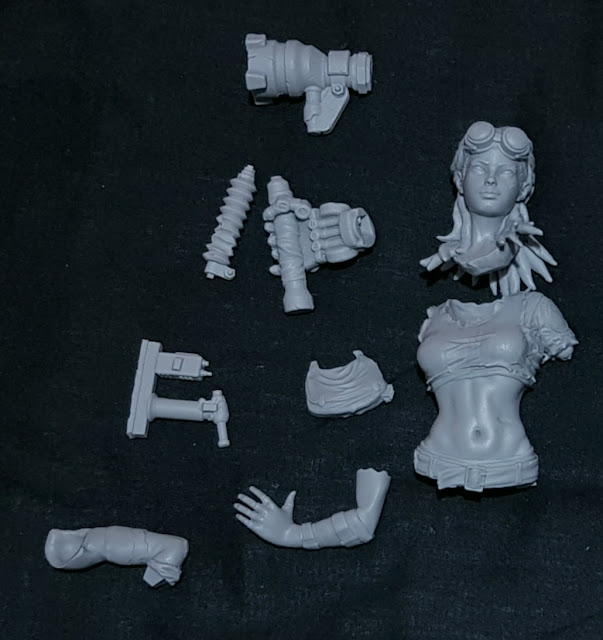 Version A is the more typical design with the least parts. When all together Goneya looks very cool and has a great face to show.

Version B has the most parts as you can see. The face has a gas mask so all the corresponding parts are present to complete this alternative version fully as well. 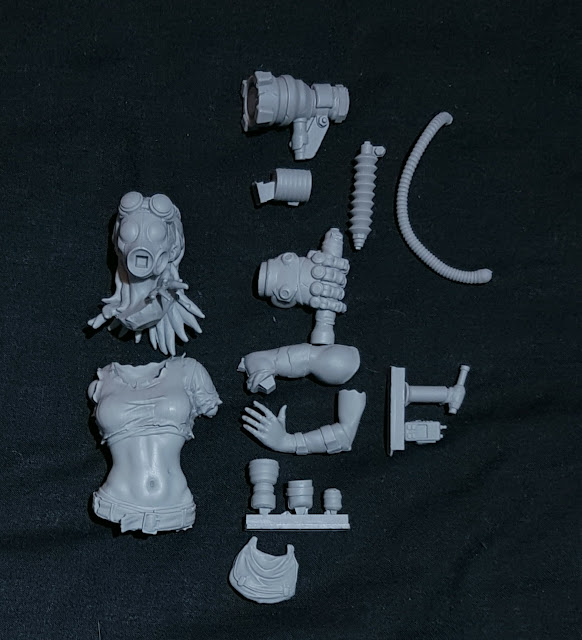 All parts are cast in nice quality grey resin. I have looked over all the pieces and as usual I looked for the defects or casting issues first of all. I am happy to say there are no defects in this kit. As for casting issues there are several minor issues but none of them are detrimental to the busts. 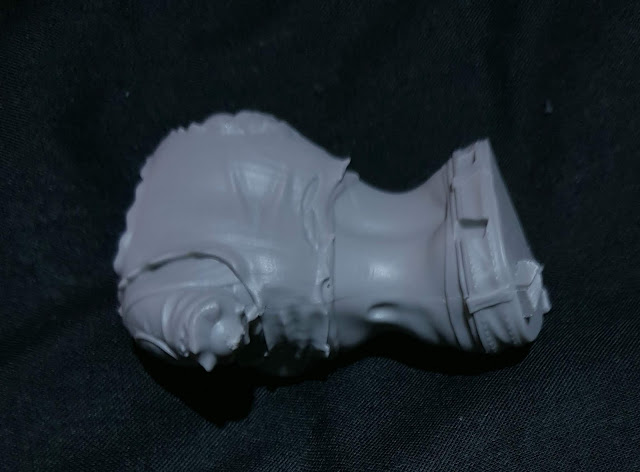 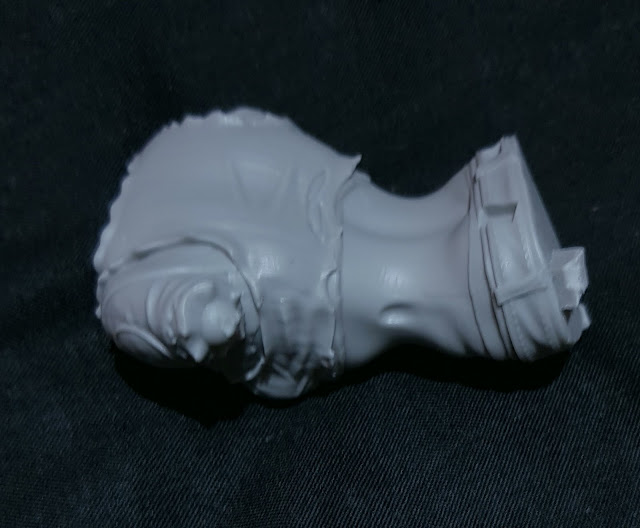 As you will be able to see from the photos the mould lines are visible but not to a point where this cannot be cleaned well.

The hammer head has a mould line on both copies but the rest of the pieces are cast quite well. Mould lines are easy to remove and some companies will do this before shipping to a degree. In fact I have several Alternity pieces and those are super clean casts.

I will need to clean them myself and it won’t take long as an experienced painter.

As a pair they cost €59. That makes it a split cost of €29.50 to each piece and many companies will sell a 1/10 scale bust of this size and quality for over €40. What you are getting here is a massive bargain. No other company will give you 2 busts of this kind for that price so if you haven’t snapped Marco’s fingers off grabbing these I suggest you are quick.

Quality at this price is highly appreciated and shows that companies who charge €50+ for smaller less detailed pieces are totally taking advantage of the community. It really baffles me when companies charge premium prices for non premium miniatures and send them out uncleaned. That is just lazy and takes liberties with the customer’s desires for those pieces.

However; €59 for 2 busts is not a premium price and as a limited edition this is a superb price.

The design of Goneya is outstanding. 3D sculpting has come on leaps and bounds recently and the detail on these busts are really nice. There is a similarity to the BrokenToad Brisket bust and the sculpting is equally as nice as the Brisket model.

Joao Paulo Ferreira is the sculptor of these two and he has done an outstanding job with the detail. The way it has been cut makes the pieces all fit together really nicely. The head fits the torso in a way that will not require filling and that again is nice work indeed. All the joints fit together very well and will require minimal filling if at all any. Goneya has been produced very well which I am happy about.

Other companies have the ability to create different versions of a bust but this requires buying multiple copies. As mentioned, Marco gives two busts at the price of one from other companies.

Value for money this piece is top of the pile. £25-£50 for a nice bust is about right, obviously licensing, creative process, and size will dictate the costings, but for a 1/10 scale bust those prices are reasonable.

The outfit for Goneya is very pin-up in style but there is an absence of those over inflated boobs we see so much on those busts aimed at the customers who look for the sexier pieces. The details are crisp and sharp. Even the vest top hem is ragged and tatty and cast nicely. If you look close at the vest you can see the knit lines and the stretches of the material and that’s pretty cool details for sure.

The dreadlocked hair is a nice detail too and completes the dystopian look of the piece.

In summary, I really like this set and it does remind me of the level of quality we have at BrokenToad so it is indeed a nice piece. If the mould lines had been cleaned off before shipping this product would have been amazing.

The style and theme of this piece is ideal for a future project and I am lucky to have received a copy of Goneya with only the 99 available. Last time I spoke to Marco there was just over 30 copies left and that was a few weeks ago. So if you would like a copy head over to Alternity Miniatures at www.alternityminiatures.com or head over to facebook and get in touch with Marco via the Alternity messenger.

Thank you for reading this review as it highlights a big issue in the hobby and thanks to Alternity Miniatures for producing original products and remember to ALWAYS SUPPORT ORIGINAL PRODUCERS.
Written by Normski on Monday, January 27, 2020
Email ThisBlogThis!Share to TwitterShare to FacebookShare to Pinterest
Labels: 1/10 scale, Alternity, Bust, Review