The Beast from Black Crow Miniatures 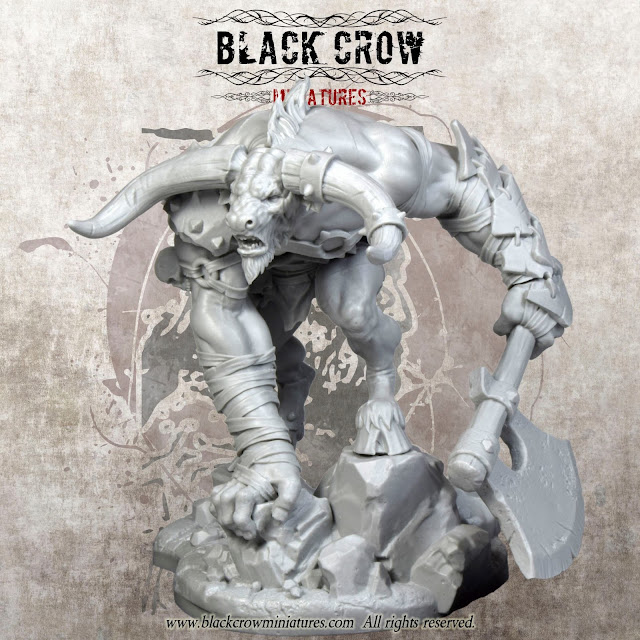 At the end of 2019 I took a look over Eldareon from Black Crow Miniatures but they also released The Beast... which I now have for you today.

The concept for The Beast comes from Black Crow Miniatures owner, Isidro Monux and a little know sculptor.. Raul Latorre (yes, but little known I mean prolific and one of the best). It's a fairly standard design for a Minotaur to be frank but then again, if it isn't broken why try to fix it? 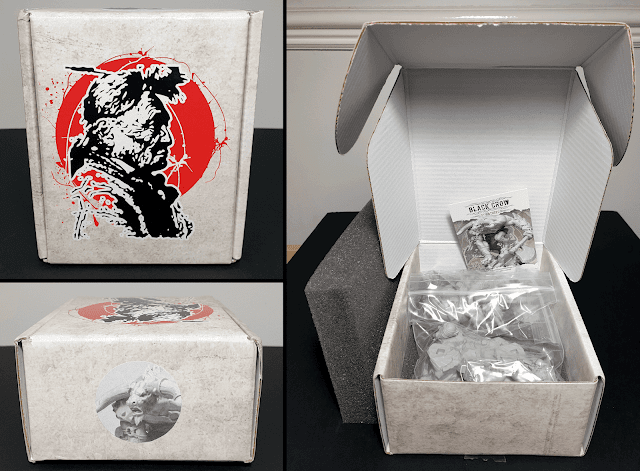 The box felt like it wanted to burst open from the pressure so I knew nothing would've been bounced around inside.

Casting duties have been handled by Ciprian so you may already have an idea of what to expect. 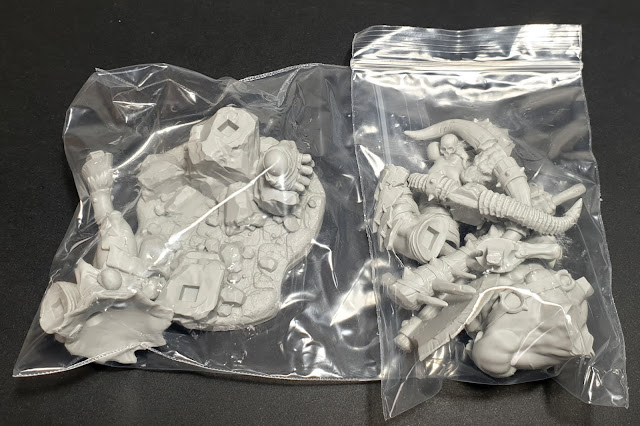 Two large zip lock bags hold everything so there was nothing left lose and uncovered. But as you can see bellow you get a lot of resin for your 48.40€ (40€ without VAT). Pretty standard price really for a 75mm size figure.

Compared to other 75mm miniatures I've looked over, this one feels huge (I know what you're thinking). If this Minotaur was more upright I reckon it would easily be at least 90mm without its base.

Just 10 parts in here and with two of them being optional (head and weapon choices to be made) there isn't going to be loads of joint work to do. But I'll speak about the joins later as I feel I really should.

The base is large indeed. A 70mm square plinth at least will be needed if you plan to use it. And if you prefer to custom build then a saw will be needed as the right hand is part of this base, frustratingly. Perhaps the hand and rock being another part could've opened up options for modellers. But many of us are more than happy to hack things apart.

First up is a more traditional unarmoured look. Huge and frankly scary horns with plenty of surface detail and not mirror images as can happen with some digital sculpting (this is Latorre after all who has a history with traditional sculpting).

A face can really make or break a miniature and a quick look over any Latorre creations will show you that he knows this. This Beast is just muscle. Everywhere. Even it's face is ripped. Subtle symmetry breaks to keep things natural and bestial.

Just the one bit to clean up which has been placed on a smooth area of the left horn and was simple to clean.

Head number two is a much more fantasy affair rather than traditional Minotaur style and even has armour plates too. The horns feel more daemonic this time and one has been damaged in combat (which is also the chosen place for the pour hole too).

So far everything has been crisp and exceptionally cast.

The torso had me wondering whether this was a 3D print or a cast. Purely due to the super fine and almost velvet like surface.

Presence of a mould line (and checking with Isidro) confirmed it as a cast. As you can see though, a little clean up has already been done before packing which is always appreciated. And the mould line is only present to about half way so not a two piece mould and brilliant detail retained where needed. 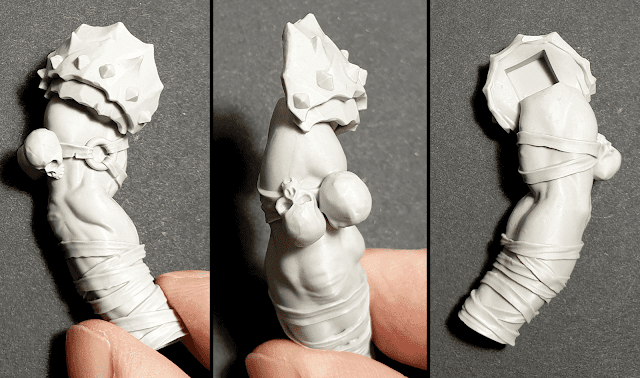 Again, realistic muscles from Raul. And a great bit of armour on the shoulder. Excellent strapping on the forearm which also shows up elsewhere too.

Minimal mould line which a bit of sandpaper fixed and a solid hole for a key which can be seen on the torso. I'd doubt much on this would need pinning at all.

And skulls. Fantastic looking skulls. Skulls which seem to be held on through sheer anger and willpower. And one of the main bits on this sculpt which has me wondering if Latorre should've spent a little more time finishing. I will have to think of a way to make these look attached  or I know it'll bug me in the long term. 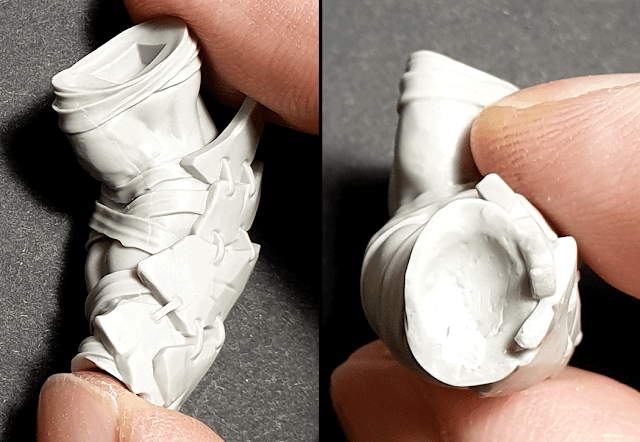 Another fine line on the inside of the left arm but again nothing that takes long to clean or fill. Bit of PVA would do it.

Pour hole hidden in a join as is common for Ciprian to do and something I love.

Again though, another tiny detail which feels a little unfinished is the armour plates on this arm. How are they attached to the straps?
Now I know that may seem quite petty but sadly my mind works this way. Maybe I'll add some tiny beads to look like rivets if I can't overlook it.

The mail leg section has a bit of a line underneath. Though again, some cleaning has already been done. Another hidden pour point too.

One of the sockets to match with the torso needed a bit of drilling out so I'm guessing something happened with the mould. I could've clipped the key down but I like to have a more solid join. 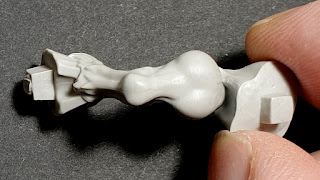 Not much to say about the left leg really that isn't repeating what I've said about other parts.

So let's have a look over the other optional pieces...  the weapons.

The brutal spiky club has multiple areas to sand but these were easy to do.

Must admit that this feels more like a weapon this Minotaur would put together and would cause some hasty injuries with. That's without the Beasts huge arms behind it.

Then there's a more typical monstrous axe. Not is the best condition and it has obviously been used to part many a person or creature.

General clean up on both were minimal... however... 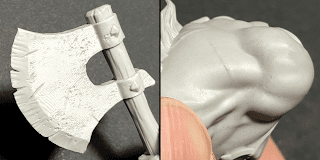 In a couple of places I found print lines. Now the shoulder isn't too bad and will likely fill when primed.

The axe head I feel would need some sanding though. Perhaps that'll change with the next set of moulds though.

I suppose it's lucky though that I prefer the big spiky club. 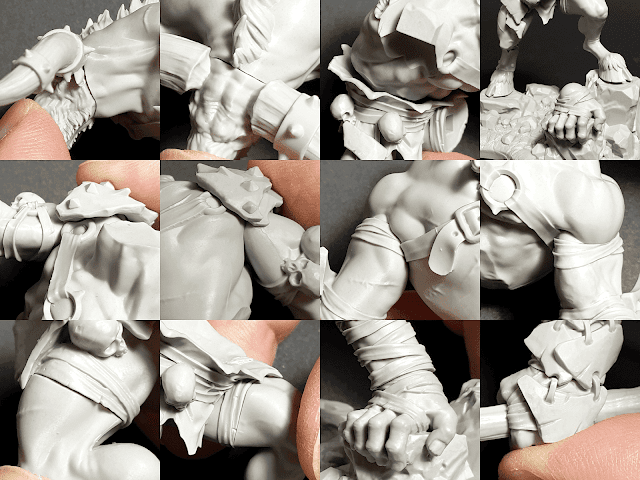 All the joins in the above collage are straight out of the box. No clean up at this point at all. None. And frankly there is only two that need some attention and some seriously minor gap filling just to be certain of a good finish.

The waist joint I mentioned already and was an easy fix. But I find that oddly the left thigh seems a little bigger than its connecting part so a little sanding will be needed for shape but nothing more.

A prime example of the one of the biggest plus points to digital sculpting really. Just how well they can be cut and joins designed.


As you can see from the 360 video above and the photos bellow The Beast is certainly an imposing figure and certain to stand out in any collection are as part of a (large) diorama.

If it seems that I've been overly critical and fussy then it's likely because I have. This is purely because of the calibre of those involved in it's creation and expectations I have from a top end company like Black Crow.

Latorre is frankly one of the top sculptors in the world and has been for years now. You can find his work in nearly all areas of the hobby and his attention to detail and anatomy is at times unbeatable. But I do feel there is a couple of unfinished areas as mentioned before but I won't dwell on those. 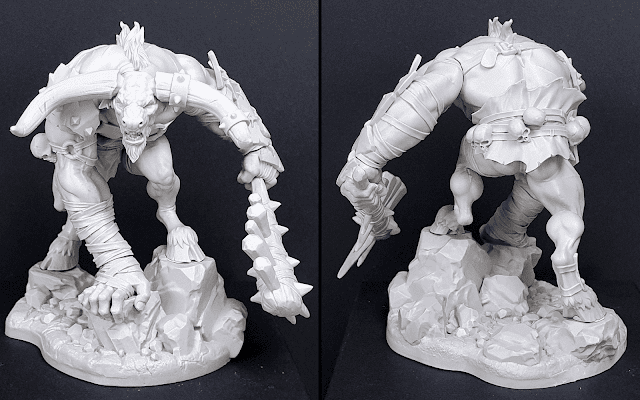 In conclusion would I recommend this kit? Without a doubt yes. And that's with the little details that I plan to add myself and possibly removing the hand/ rock from the base.

Solid pose and anatomy and almost disgustingly easy to assemble with minimal clean up. Plus the resin and casting quality in general I can't really find a reason not to be added to my "I will paint this" collection (I will... honest. Just don't ask when, yet). 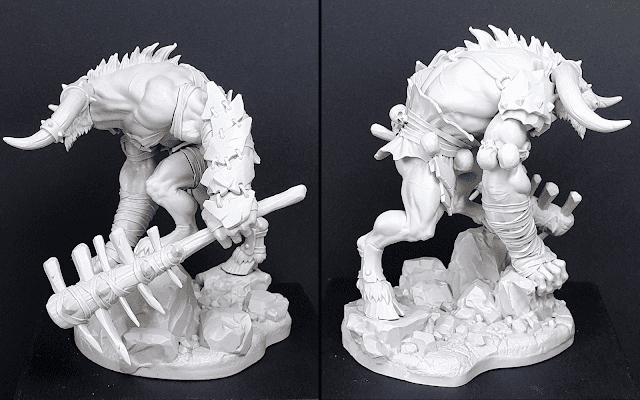 If you've made it this far, and I really hope you have (and not just looked at the pretty photos) I can only thank you.

Would you be wanting to add The Beast to your collection then it can be bought directly from Black Crow Miniatures at https://www.blackcrowminiatures.com/ or at any of the official stockists.