Kannibaal, the Ogre from PF Works 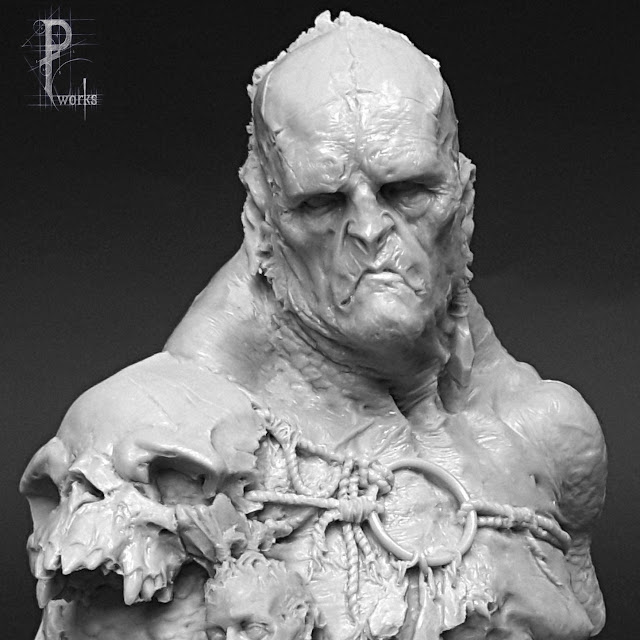 PF Works is the brand of the well known and popular sculptor, Pedro Fernandez. Often more recognised for his beautifully created female sculpts, Pedro actually has a great skill in creating personality driven monsters and Kannibaal, the Ogre is just one of them.

Released in 2017; Kannibaal still stands up well amongst more recent releases to the retail market.

Packaging as you can see is simple but functional. Large sticker with the concept art seals the box and really gives a great feel for what to expect from the bust inside.

The two parts to this 91mm tall bust are held within brown shredded paper and only the small part is contained in a zip lock bag. So plastic is being kept to a minimum. 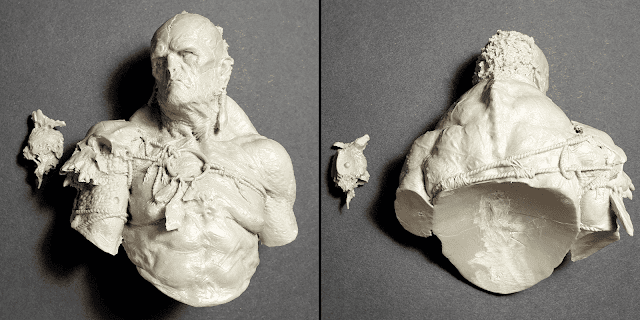 Like I said; two parts. And that is one detailed lump of a main section.

Can't help looking at all those details. Details on details.. and more detail. If you love sculpted texture then this will be heaven for you. And when it comes to creatures and skin, I do indeed love texture.

The small part is a decapitated and decomposing head. Not an uncommon detail on fantasy creatures and evil warriors but this I'll comfortably say is one of the best (and maybe the grossest) I've seen.

That dislocated jaw, tongue, and the skin just about holding things in place reminds me more of horror film special effect props than those usually found on miniatures. Which is crazy when it's less than an inch (25mm) in size. Don't forget too; this is traditionally sculpted. No computer sculpting on this one.

Fitting it into place is easy and the lone ball and socket connection lines up perfectly.

The way the cheek bone lines up with the large shoulder worn skull (which I'm guessing would be from something like a troll or small giant) is great. It's not designed to be a perfectly clean join and meant to look like a natural crack which works well.

I doubt I'd fill the gaps like I usually do. Perhaps just a little PVA to reduce the depth of the join so it isn't so obviously two parts. But that is the sort of quality join you see on digital sculpts. A sign of Pedro's sculpting ability. 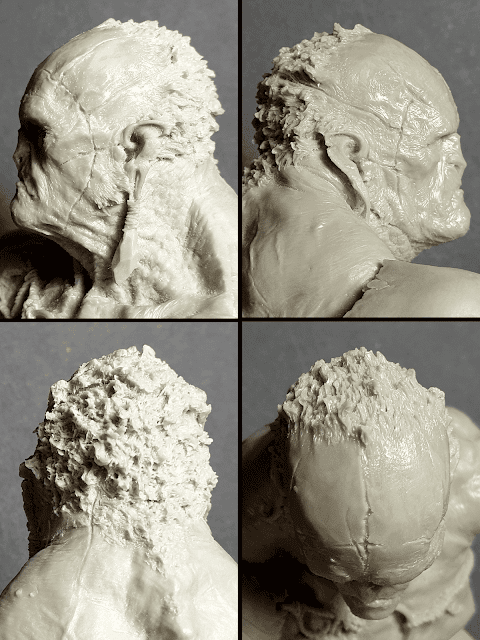 I mentioned "personality driven" above, and where else to see that than the face and head.

This beast has some deep scaring running around his face. Reminds me of the classic chaos 8 pointed star. Have to wonder how that would occur. Self inflicted? Some sort of branding from something more powerful? Who knows.

You can see his hair too. Short and wiry. No smooth and well kept flowing locks here. 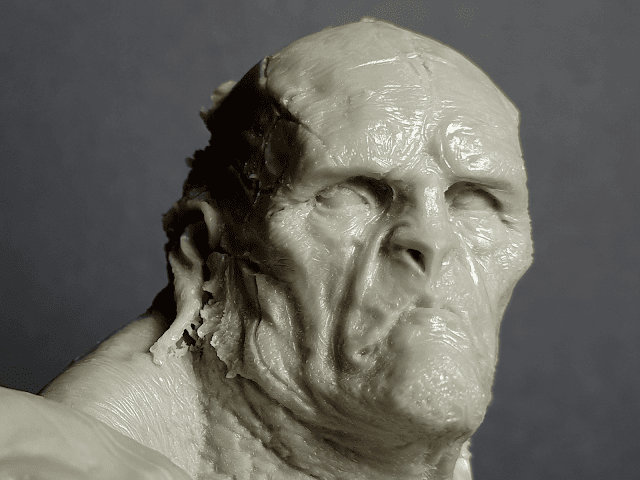 But that face. So much surface texture and muscle definition. Some may call them "micro volumes". Depending on your method of painting these could be a dream or highly time consuming. But I like it. Lets me play around.

Something of note are the eyes. The iris are sculpted so direction of view has already been fixed. It's more common to find smooth eyes or small holes for pupils. For Kannibaal I feel this way works though but if you want to change his gaze you'll need to carefully smooth those.

As for his facial expression; he certainly doesn't look happy. Not the usual angry and aggressive look for an ogre which is different. But that's something I imagine could change in it's mind. 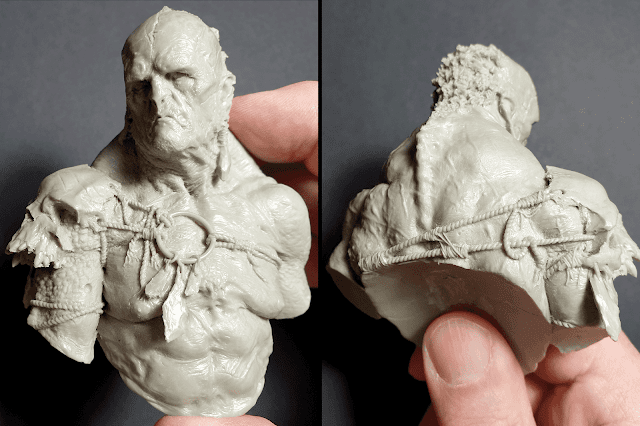 Just check out that attention to detail. The way the skin and muscle has been sculpted in the neck to suit the head position is incredible. This beast is obviously full of natural muscle but is no toned gym goer as often seen in miniatures.

That skin though. Loads of scaring (including what looks like Pedro's signature on the right arm) and surface noise. Plus some lumps to take it that bit further from looking human.

Then you have the ropes, string, stones, metal ring, and huge skull on the shoulder. I don't need to tell you how well those are made; you can just look at the photos.

So with all that surface texture and detail... how the hell do you cast it without loosing any?

Well... you can't. You have to cut a mould somewhere but luckily the caster went for the least detailed path running up the left shoulder and into the hair (first 2 pics). It looked quite heavily cleaned until getting to the hair which personally is a shame. With such a textured area I prefer to follow the texture with a scraper tool I have and kind of carve into the sculpt rather than remove a straight line. So yes, I am one of those who likes more of the fine clean up left to me.

In the other tow pics you can see a couple of areas of flash to be removed. Between the stone and body, and a line inside the skull mouth. Both were easy to do with a pointy scalpel and scraper. 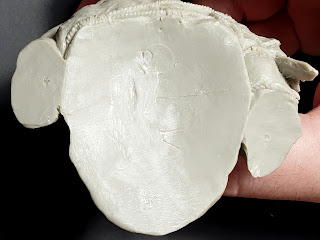 On the underside you don't find a flat/ smooth surface. It more curves inwards so I suppose if you prefer a flat cutoff you could fill it.

There's was quite a bit of sanding to be done to get it clean. Luckily wet & dry sandpaper works well in curves. You can also see where the wire frame would've been. Surprised that wasn't filled before moulding to be honest.

As usual I had to assemble this to give you a proper look at it and still trying to get a 360 video without a rotating turntable (I really should get one). So please ignore the odd knuckle or finger.

Hope you didn't get motion sickness.

But of course I took still photos too. 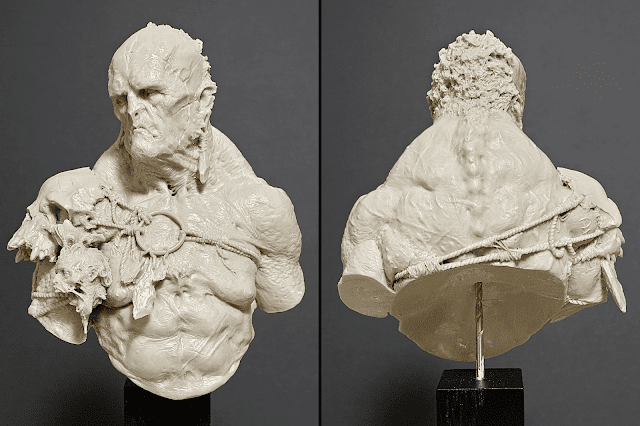 I'll admit, I have no idea what scale this would be. It's 91mm in height but going by the size of the human head I feel it's closer to 1/24th scale (75mm) than your more standard bust scales. But does that change what I think of this?... 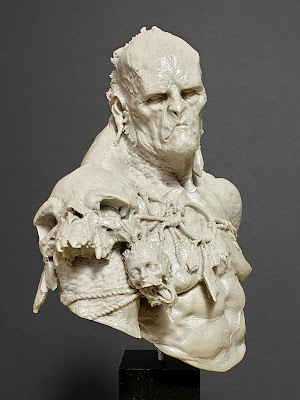 Not at all. In fact it brings with it so much I enjoy playing around with like creature skin, bone, and rotting stuff (yeah.. I'm a bit odd at times). And I find that I prefer having him with his sculpted gaze as the front view rather than the angle hinted at by the cutoff.

The casting is excellent with minimal cleaning and the resin is great quality too.

Honestly I've looked at this bust quite a few times and 50€ for the size and standard is more than reasonable. Until now I've only looked over some of his female sculpts which have always been impressive but this really ticking my monster loving boxes. 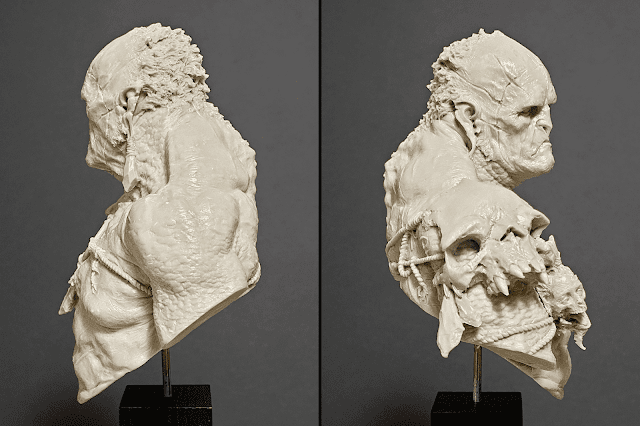 If you would like a copy of Kannibaal for your own collection or a look at the rest of the PF Works range they can be found at https://pedrofernandezworks.com.

You can also like the Facebook page or Instagram to keep up to date.
Written by Steve Haydon (Forté) on Monday, February 17, 2020
Email ThisBlogThis!Share to TwitterShare to FacebookShare to Pinterest
Labels: Bust, Fantasy, Ogre, Pedro Fernandez, PF Works, Resin, Traditional