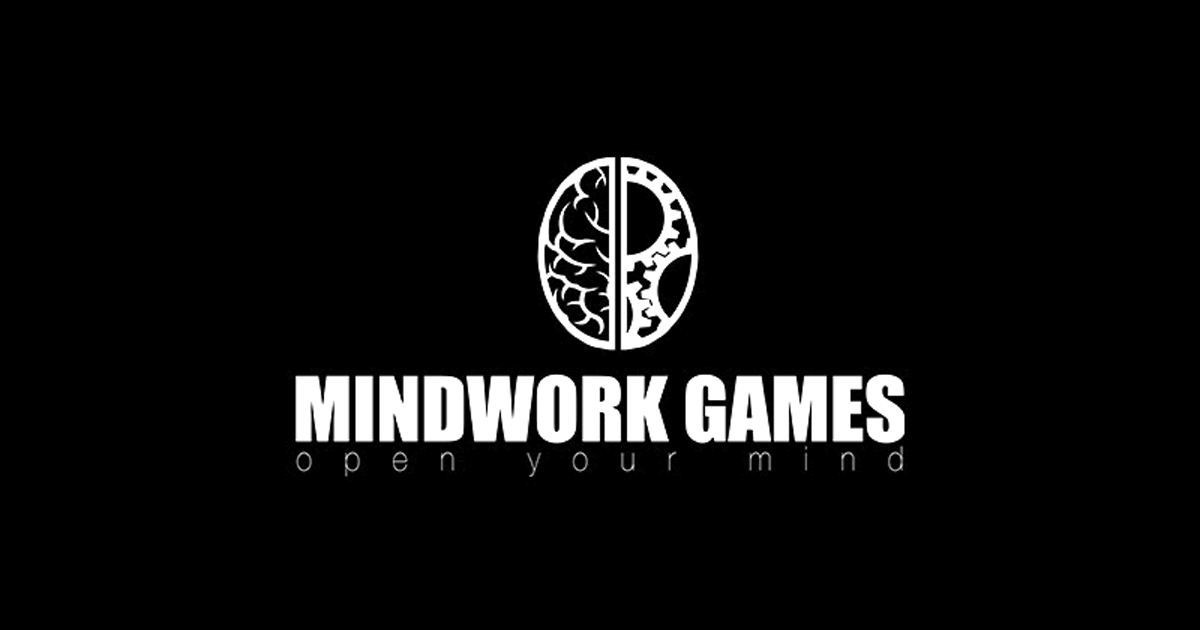 Mindwork Games have been about for a fair few years now. Initially making originally designed figures, then sold as part of Kimera Models range, and more recently back as an individual company and taking a new direction.

However; Mindwork Games releases are generally limited editions which we usually shy away from reviewing unless we know that either a. there is a lot of stock available, or b. it seriously needs to be seen. This is more to avoid having someone read a review in future and really wanting a kit from one of our reviews, only to find that it is no longer sold. Bit disappointing when that happens.
Now recently I had two kits from Mindwork Games sent to me thanks to Matteo Di Diomede which was a lovely surprise. But I didn't feel that just a review would be fair to potential customers. So after having a think I thought I would approach this a little more like an introduction to what Mindwork Games is offering while also reviewing the two kits to give you an idea of the standard of quality you can expect to find when buying from them.
To note, both kits are still in stock at the point of writing.

Mindwork Games became active again on social media by showing what would become the first release in their new Signature Series. The idea here is to work with artists to either create new art or to translate a piece of the artists work into a 3D sculpted miniature.
Now I know finding a miniature based of existing and known art isn't a new thing, but Matteo has been doing it the right way by getting permission and being able to also name the artist which can lead to more people viewing their work too. Many others are doing this in their own way, but surprisingly there are still many using peoples design concepts and artwork without permission. Otherwise also known as intellectual property theft (IP theft for short). 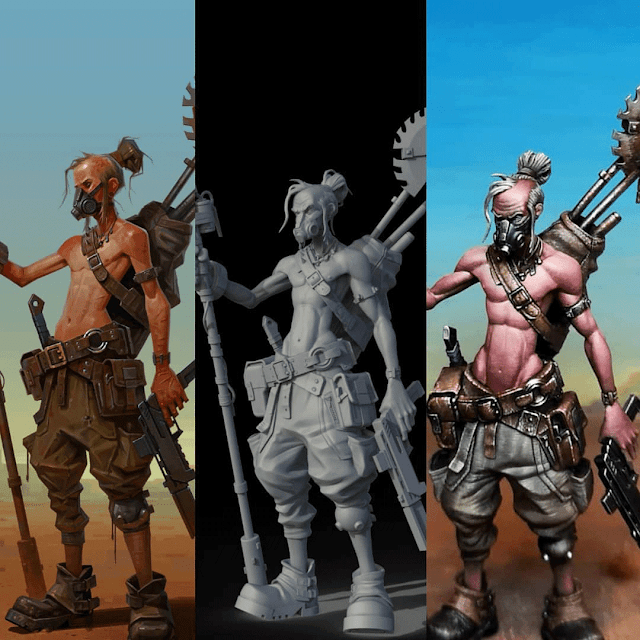 Buddy was that first new release from the Signature Series and you can see above how it went from original art, to digital sculpt, to box art.
Now Buddy has quite a current computer game comic style feel. But looking at how things progress, variety is the plan with this range. As you can see from the three releases which followed.

Left to right:
As you can see, the sculptors have really been doing fantastic work and the choice of art varied too. 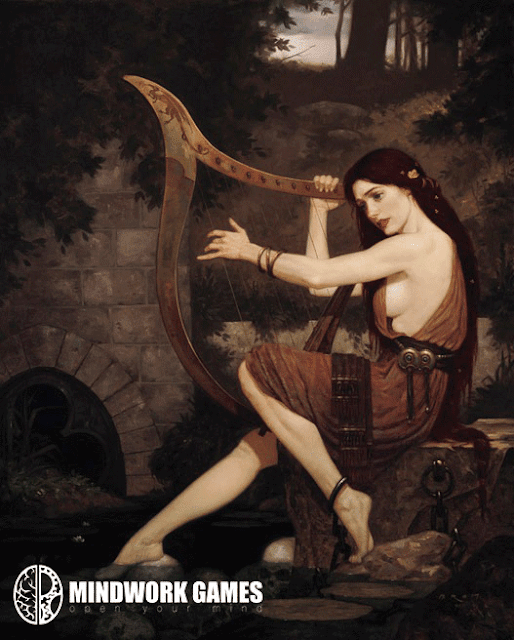 The last release in the Signature Series was Lost Note again from Brom. This time it was James Cain with the sculpting duties which he did so well that all 200 copies sold out quite quickly (which Normski luckily bought one for his own collection).
If you have a copy of Lost Note I can safely say that I'm looking forward to seeing them painted up and with some water effects too.

Not content to just create from other artists designs, they have another range named Mindwork Originals. The first in this is a rework of an old figure from them called The Puppeteer. As you can see the design has not only moved from traditional sculpting to digital but also tells a much bigger and darker story.
This shows great promise because there were some pretty original miniatures in the original range so keep your fingers crossed for more reworks.

First up out of the two reviews is Blood Temple from the art of Patrick J. Jones.

Luckily the shipping packaging was nice and solid with plenty of packing to keep everything safe because the card on the individual items, while looking lovely and having the edition numbers written on, is pretty thin.
All parts are packed with black paper and foam, while smaller bits can be found in a small brown paper envelope. No plastic packing in use there.

Eight parts in total to make the 75mm figure and the scenic base. Not anything glaringly needing a lot of work to clean or assemble and really zero need for any instructions required at all as normal for most of these kind of miniatures. 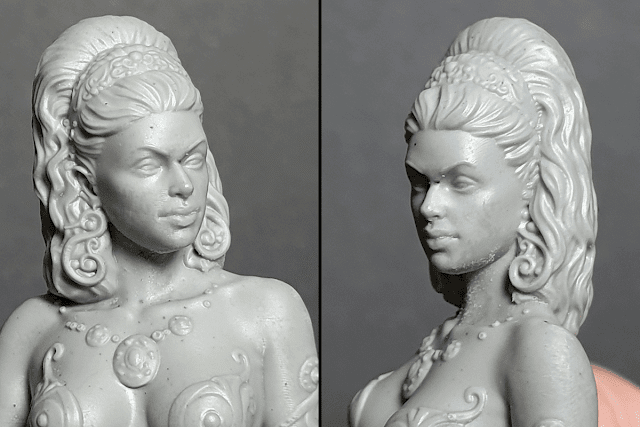 Have to start with the head really as it can really make or break a sculpt.
You can see there has already been some mould line cleaning done prior to packing. Not perfect but still appreciated. Does seem to be a tiny part of black mould at the bridge of the nose which I'll need to remove and fill. Not ideal but one of the risks of rubber moulds which you can't totally avoid with resin and metal casting.
Now this is likely to be enlarged photo wise and many of the tiny dots and lines on the resin I couldn't actually see with my eyes. Something to always keep in mind when looking at photos.
One part of the sculpt which I am surprised with it the lack of any chain connecting the parts of the necklace. Thinking about scale though, that might be a good move when something is so fine that it is pretty much invisible to the eye when reduced in size. 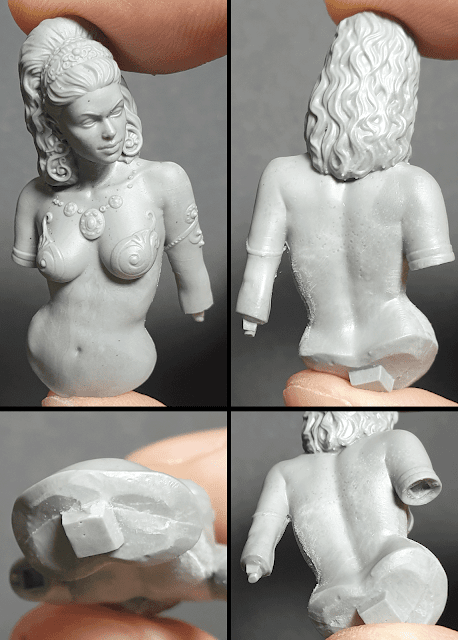 Victor did well to copy the body shape created by Patrick. This has also avoided going down the more pin up style look and has a much more art feel. Well done.
Decent detail reproduction. Could be a little sharper in places but in general it works with the style.
Bit of mould line cleaning to finish but nothing hard going. Solid shaped keys and sockets too. No pinning likely needed. 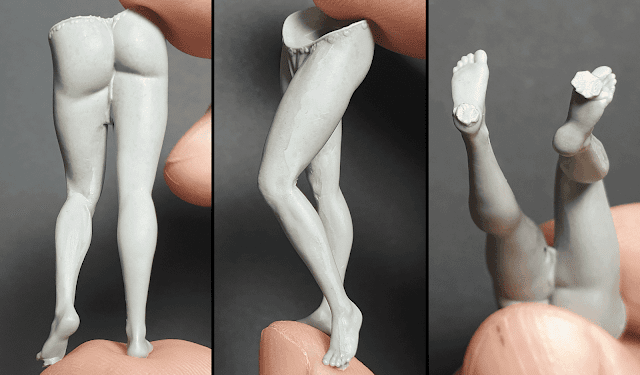 The legs as you can see needed the most cleaning. Shame the mould cut went through the toes on the left foot, but there was no bubbles.
Kind of a shame that there aren't keys on the feet to get a more solid connection to the base, but there are prints for the feet to match up to. Little odd for a solid floor but that's just my head being my head. 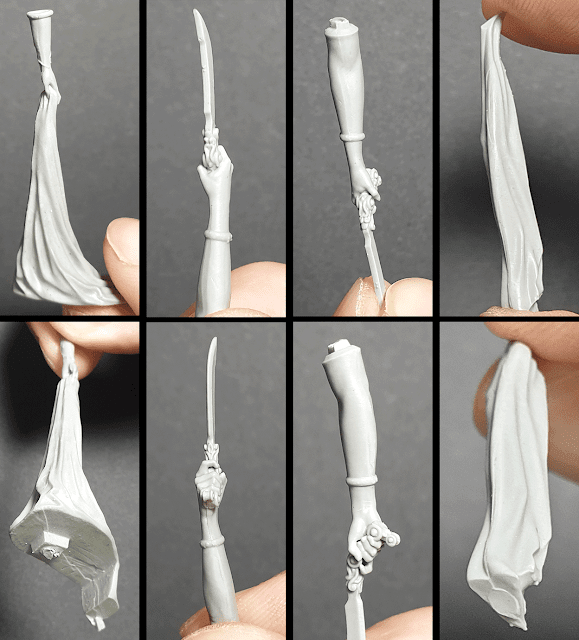 Just three small parts with some good attention to detail and a bit of cleaning needed.
Blade does need a little straightening with a hot water bath but that's pretty much it. 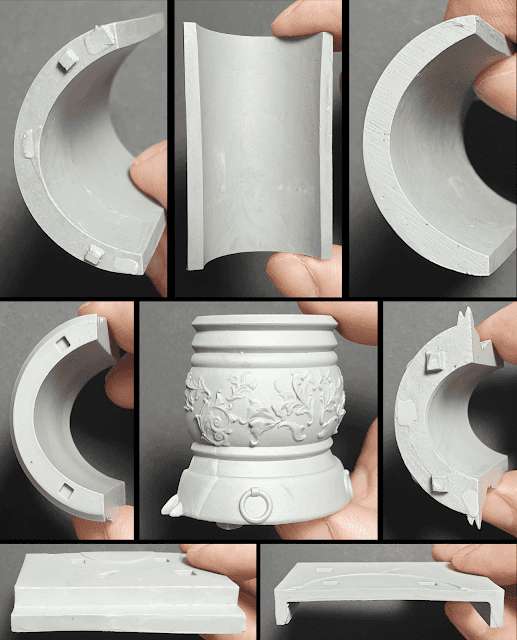 I enjoy basing and don't usually use pre-made bases. This one however works too well to really set the scene for the figure.
Interesting to see that they aren't made as solid parts. Good way to keep the weight down though. But I do feel the floor section could've benefited from not being hollowed out. More to help avoid warping and give a better join to any plinth.
I'd be tempted to fill the back in. Likely using foam board and plasticard. Just to give it a solid look. That's just me though. 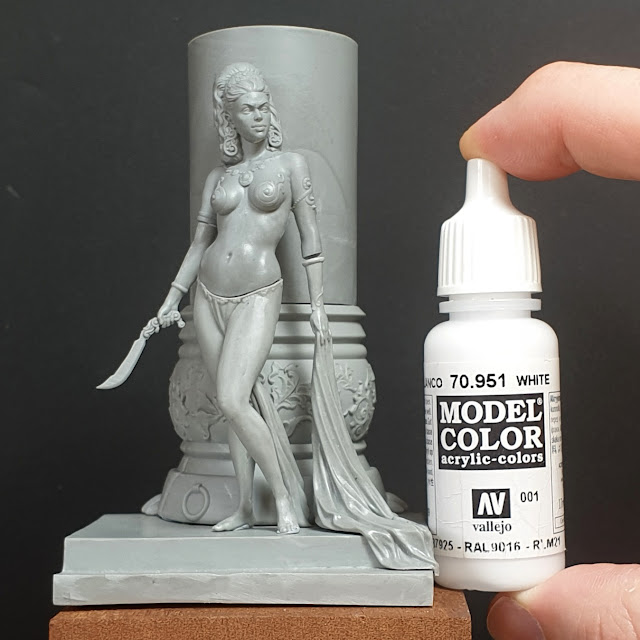 Blutac isn't the perfect material as it sometimes causes joins to not match up as well as they actually do.

I've been getting pretty spoiled looking at casting from the likes of Ciprian. Scale75 have still done a good job casting here. 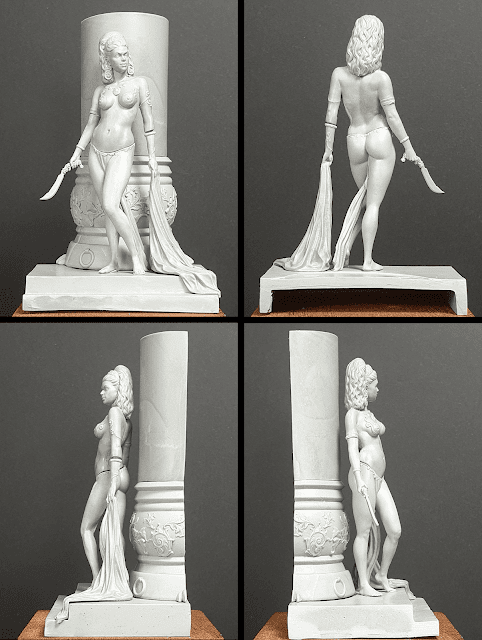 Initially when I saw this sculpt my first thoughts were "the legs looks a bit odd, short perhaps". After chatting about it with Norm it dawned on me that much of that comes from being use to seeing high heels and clothing pulled up to the hip bone. That gives the look of longer legs. Not a style and overall look I'm used to seeing in miniatures. And that's not a bad thing at all as variety keeps the hobby fresh.
Overall a great recreation of the canvas art and I highly recommend checking out how Matteo is painting this figure over on their social media channels.
Will I paint this? I'm almost scared too. I don't airbrush and don't paint smooth. Perhaps it could be a time to learn to glaze and blend with oils perhaps. Would be nice to paint though as it has a very classic art feel.
If you would like to add Blood Temple (while stocks last) to your collection or check out more of the range you can at https://mindworkgames.net/
Don't forget to check out their social media too. Give them a like or follow on Facebook and Instagram. 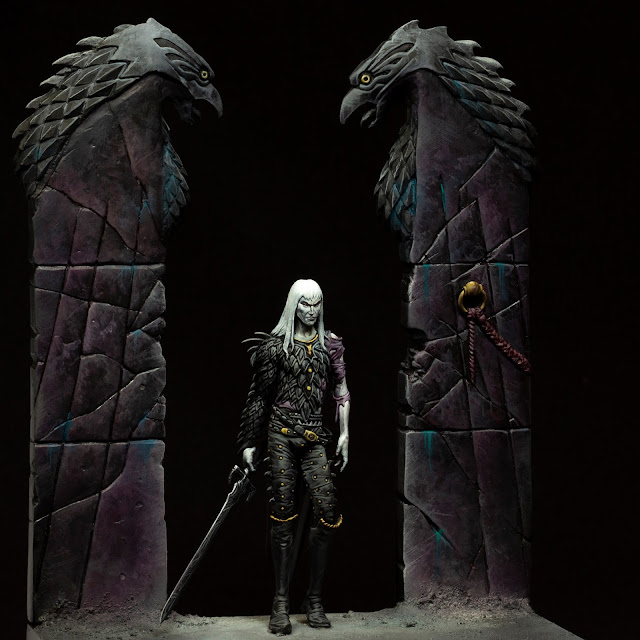 Later this week I'll take a look over another kit from Mindwork Games in the form of Brom's Lone Wolf.
Until then, stay safe and try not to lick your brushes.

Want to support GMR?
Have a product you would like us to review? Contact us and we'll be happy to talk.
If you would like to Donate to the running of GMR, anything is greatly appreciated.
Written by Steve Haydon (Forté) on Monday, August 24, 2020
Email ThisBlogThis!Share to TwitterShare to FacebookShare to Pinterest
Labels: 75mm, Mindwork Games