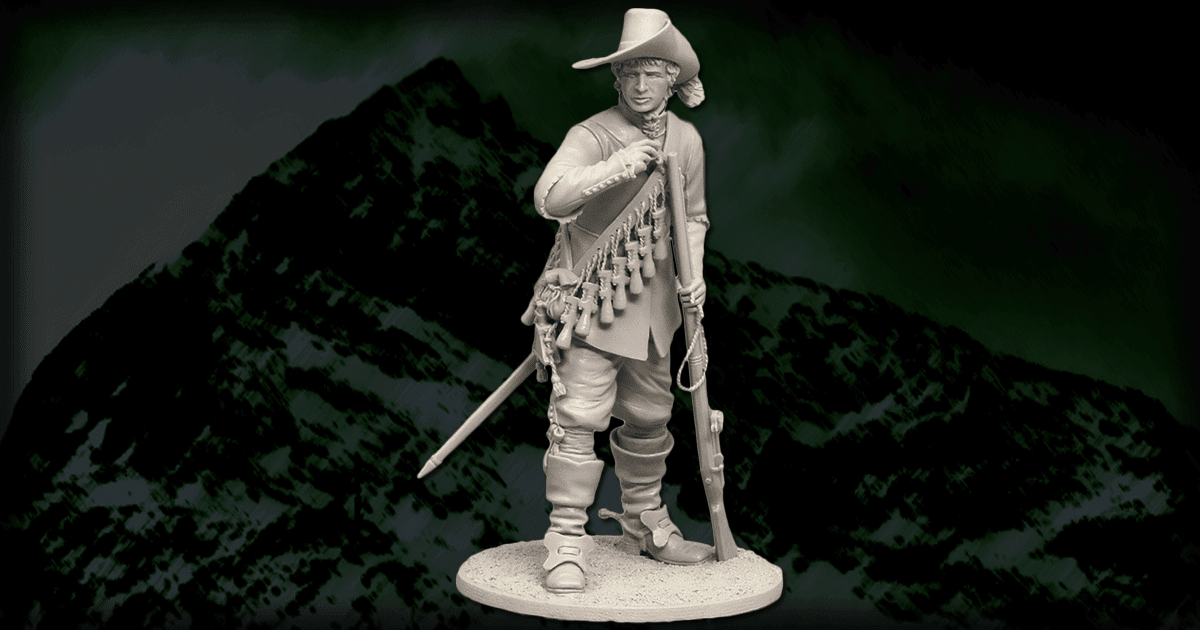 When it comes to miniatures of the Thirty Years War, Avanpost has quite an extensive and growing range both in 28mm gaming scale and in a more display painting friendly 75mm scale. For this review I'll be taking a look at the recently released Dismounted Dragoon sculpted by Maxim Voronin but you can expect a follow up looking at some 28mm in resin and metal. 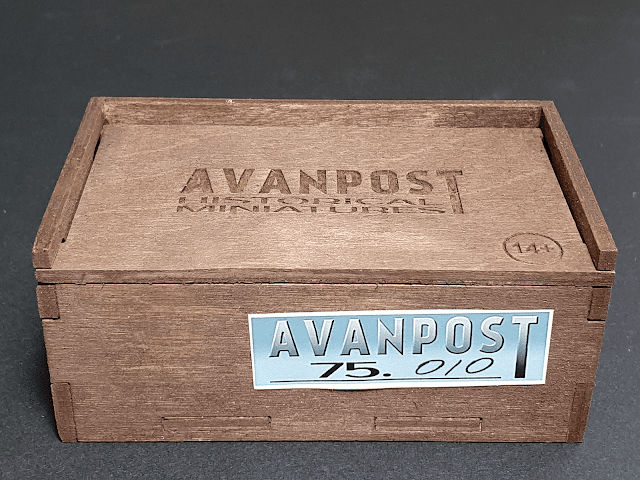 The figures in their 75mm range come in a fetching laser cut wood box with the logo and suggested 14+ age burnt into the top. No box art and a simple sticker with the catalogue number. Plain but also nice at the same time.
The lid slides forward and flips up which tickled me but I do love when packaging is a little different.

All parts are pretty packed into the box with bubblewrap folding through the layers to keep them safe and secure. Nothing was going to move about and it isn't under pressure either.
Lots of zip lock bags with the many parts in as you can see.

Thirteen separate bits resulting in sixteen individual parts...to make one 75mm figure. That to me is nuts, but I'm not complaining when it looks like this.
I'll say this straight away though, the base whist holding the figure in place well, is pretty boring and feels a little like an afterthought. I'd expect that most people who pick this up won't be using that part and create their own scenic basing. Other than that, lets take a better look at what you get. 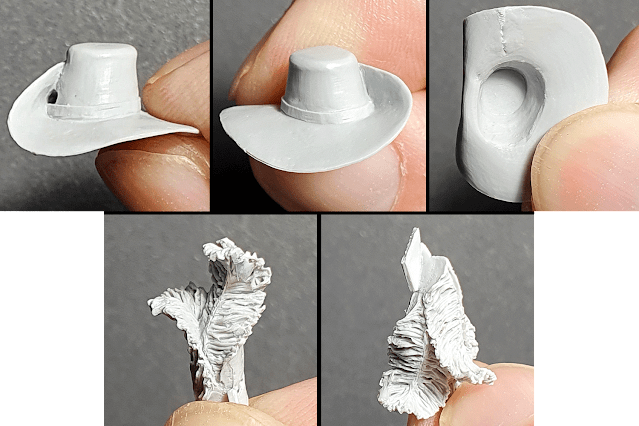 Sack me now... I have no idea what these hats are called. Did have a search but failed. Sorry.
What I can say though is it looks spot on for images I found of dragoons and musketeers. The feather like decorations look great and slot into place after removing that piece of excess excellently. 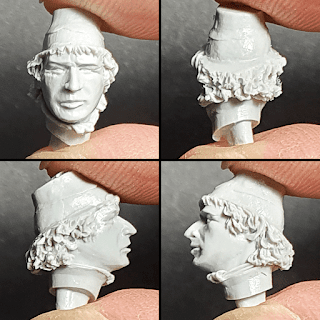 The face isn't the most defined but does give the feel of a younger soldier.
The way the connections are done meant I could just place the head and hat into position without needing any blutac to hold it in place. A good sign for the rest of the kit. 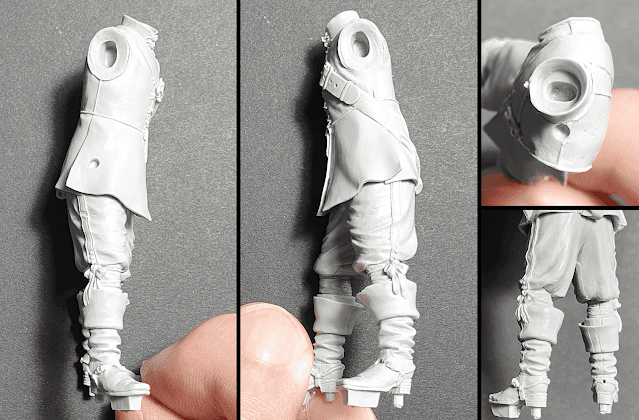 Clothing as you can see from the main body section is really well sculpted. Great folds and creases in the cloth and leather. Not to mention the smaller details too.
As for mould lines and excess resin to remove, these have been kept to a minimum. Mostly found between the legs and a bit on the outside of the boots. Nicely done. 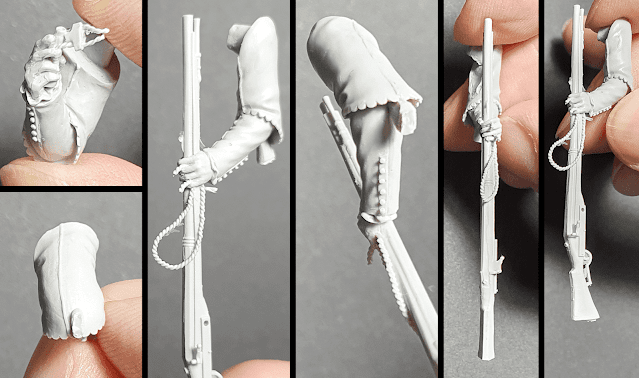 The arms and musket have some great details. Buttons, rope, and great hand positions being a part of it.
There's some fine flash, some excess to remove on the elbows, and a minor mould line here and there but generally again really well reproduced. 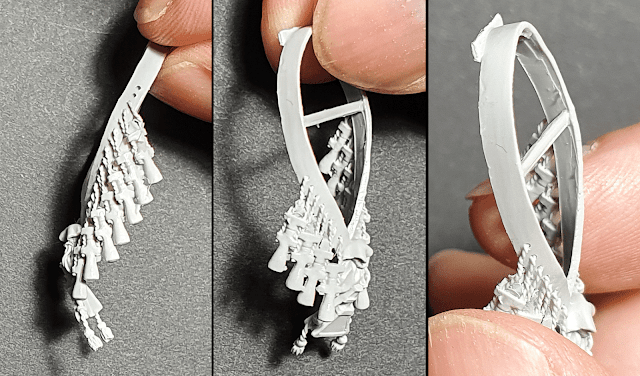 Was surprised to find the bandoleir as a separate part but from a detail perspective it's a good move. Does make cleaning within the rope parts easier too.

His spurs, boot decoration, and pivot part for his matchlock rifle are all attached to chunks of resin. Must say that the parts on the left look quite protected which is good because they're really tiny.
I'll admit I didn't add the tiny parts on when I did the assembly below because knowing me I'd lose them which I didn't want to risk for a blutac assembly. 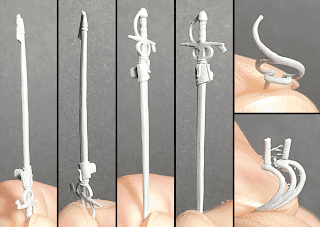 Last up there's his rapier in three parts.
This looks great though I didn't even assemble with the two detail parts to make the guard as I would've had to glue them into place.
Great looking detail and again, minimal cleaning needed. 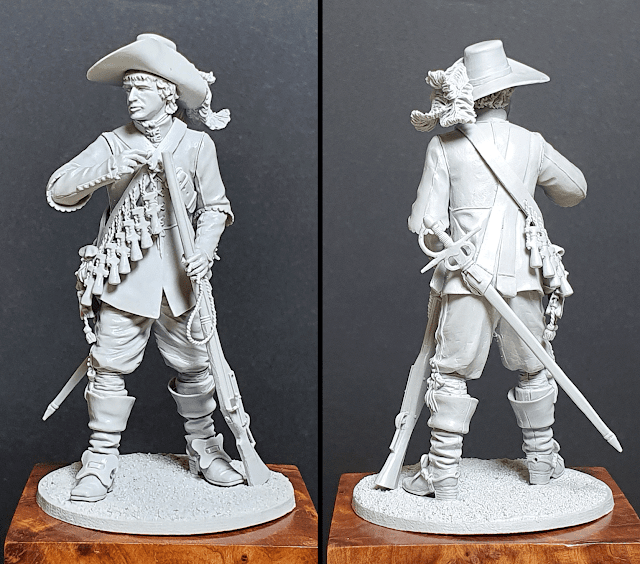 This just makes me think straight away of stories like the Three Musketeers which is no bad thing as they are frankly great stories. Doing some quick research into the Thirty Year's War will give you a hint of just how well designed this figure and the Avanpost 75mm range is.
Maxim has done a frankly great job on the sculpting and creating the various joins and parts to the kit. I've seen members on the Planet Figure forum speaking very highly of the Avanpost figures and I can really see why. Well chosen cuts and sockets made too pretty much removing any need to pin and making every part match up to it's location easily.
The casting and resin quality is great with minimal prep work required and pretty much zero need for any gap filling.
Price wise is pretty average for a multipart 75mm historical figure coming in at 40€ directly from Avanpost in Russia, or £35 from Mezzer's Minis in the UK so zero issues when quality is like this. 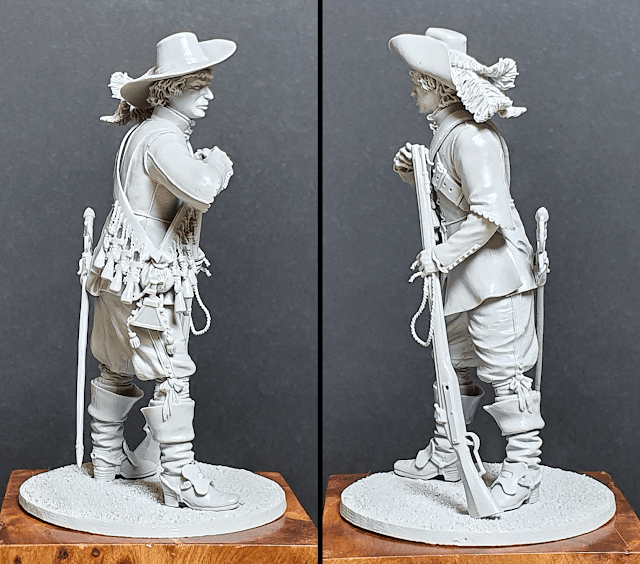 Currently Avanpost do not have a direct web store but you can see their full range in their Facebook group https://www.facebook.com/groups/avanpost.miniatures/ and contact them directly via email at avanpost.miniatures@gmail.com
You can also view the range and buy from Mezzer's Minis (especially if you're in the UK) at https://www.mezzersminis.co.uk/avanpost-75mm
As I've already mentioned the Facebook group I'm kind of left to say...I hope this review has been of use, especially if it means you've found another company to check out for your hobby enjoyment.
Take care, stay safe, and see you next time.

Want to support GMR?
Have a product you would like us to review? Contact us and we'll be happy to talk.
If you would like to Donate to the running of GMR, anything is greatly appreciated.
Written by Steve Haydon (Forté) on Monday, October 26, 2020
Email ThisBlogThis!Share to TwitterShare to FacebookShare to Pinterest
Labels: 75mm, Avanpost, Figure, Thirty Years War