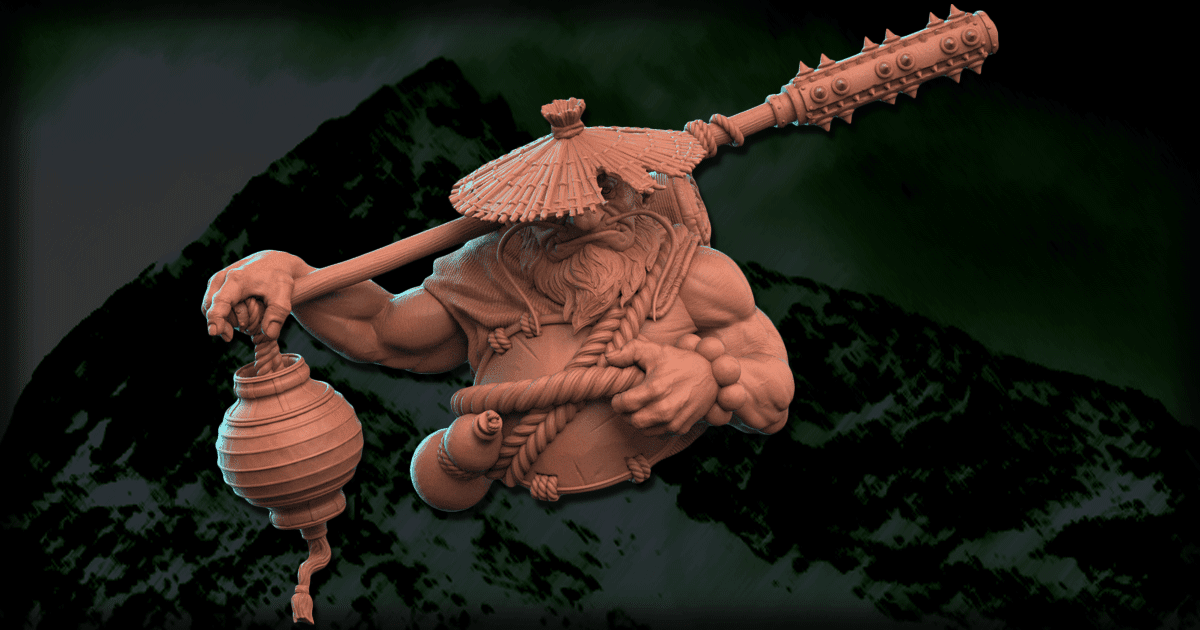 Following up from Operation Knox; Mr Lee's Minis has now released another bust sculpted by Joao Ferreira. And it is quite a sizeable one too. 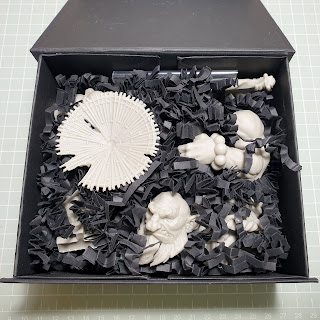 For total transparency I need to tell you that this is one of the early test casts and doesn't have things like a box art sticker or anything else other than the bust itself in the black magnet closing box Mr Lee's Minis likes to use for larger miniatures in their range.
I also do some work with Mr Lee's Minis too but Kyle (the owner) knows that I say what I see and appreciates a good chunk of honesty in product reviews, so there won't be any favouritism or mates rates. If anything I'll likely be even more critical because I'd expect the best products possible.
This thing is a lump. Boxed it comes in at 382 grams which I wasn't prepared for when the postie delivered. I'd been told it was a fair size but really wasn't expecting that at all from the photos I'd been shown.

16 separate parts; although 1 (or 3) are optional depending on if you want the lantern or a pair of balls hanging from the end of his huge weapon.
And no... I couldn't think up a better way to phrase that. Sorry... not sorry.
Right away I can see there's some work to be done removing excess resin but I'll talk about that more as I look closer at the parts below. 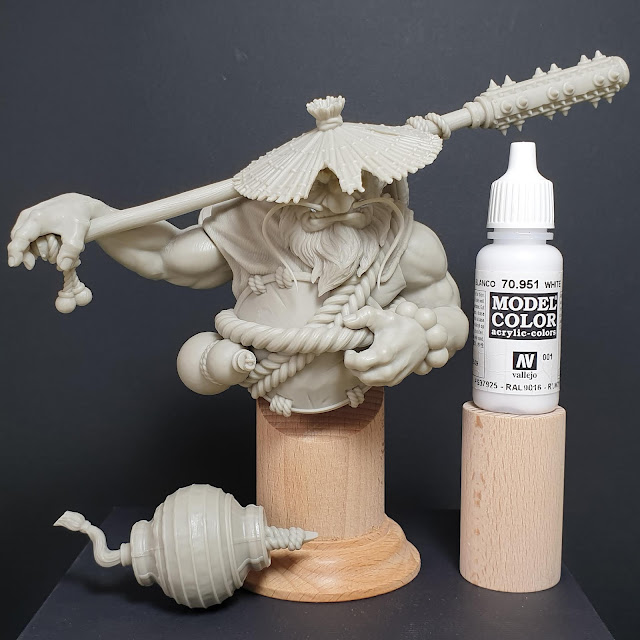 I would've hung the lantern for assembled photos (more at the end as usual) but the blutac couldn't take the weight.
Already you can see this fella is a big bust. 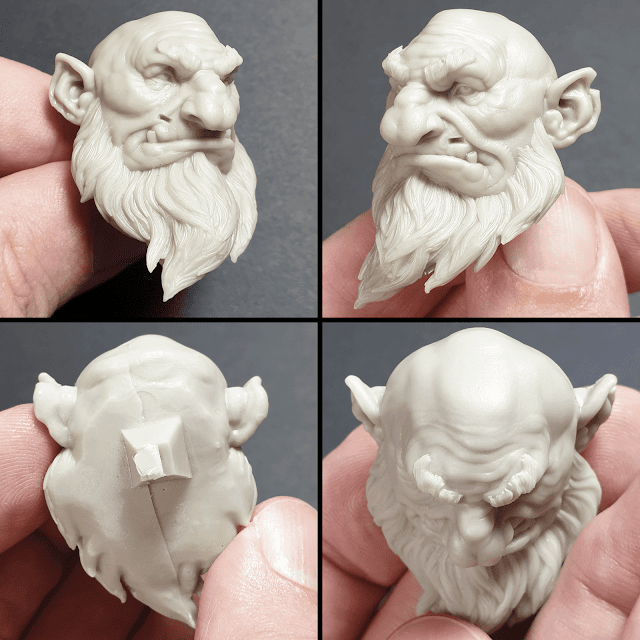 Kumarajin has one big head when compared to most miniature busts I look at for these reviews.
He has an interesting style and has me questioning if it is less dwarf and more ogre. But the creator of this calls it a dwarf so I'm not going to argue.
Race questions aside; there's plenty of character going on in that face and facial hair. Those eyebrows are particularly impressive.
Scary looking stepped mould line on the back but it's in the join to the main body and sanded away well to result in a great join when in its position. 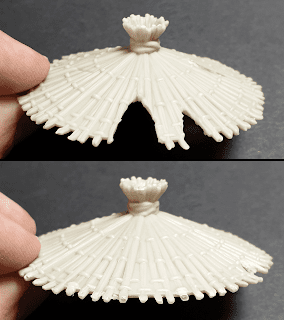 Nothing really says oriental fantasy more than a bamboo hat. Couple of large chunks missing so he can look through it craftily.
Tricky one casting wise by the look of it. On one hand the mould line goes round the edge which is good. However, as you can see particularly in the bottom photo there are also some air bubbles on the ends of some of the bamboo sticks leaving you with holes. I suppose you have two choice there though. Fill them like you usually would or treat them like the ends are hollow.
This part doesn't have a set position or join so you could pin it in place, leave it off showing the head fully, or perhaps find a way to have it on his gear being carried. Be interesting to see what people come up with. 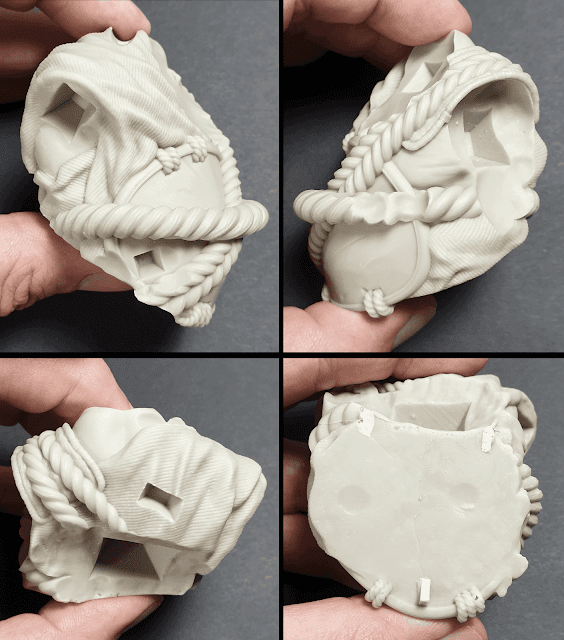 That's surely a figure of a very content dwarf (or ogre...who knows). Also a huge lump of solid resin.
A variety of materials can be seen with the thick rope, metal belly plate, bits of skin, and the robes with their sculpted lines. Now I'm still on the fence when it comes to the likes of cloth being quite textured at the sculpting stage. Don't get me wrong, it has great shape here with the creases and folds, and looks to have some weight to it. But in my mind the lines restrict painting options. Obviously many disagree with me and that always pleases me when it comes to miniatures or we would always be seeing the same things being painted and nothing else.
The holes for other parts to lock into are solidly designed and everything locks in place nicely so and gap filling will be minimal of not needed at all. I did have to cut what looked like a drip of resin out of one, but like I said before this is a test cast. Some mould line and excess to clean but none in the way of details. 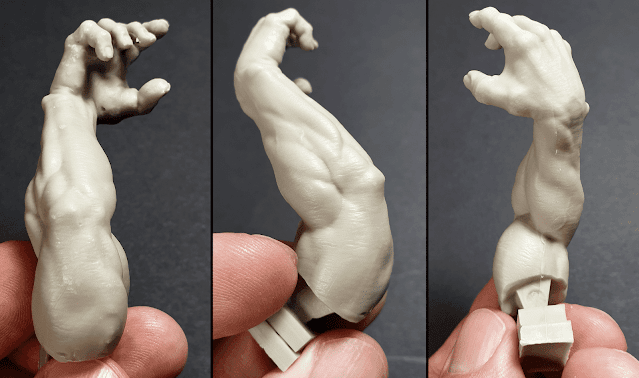 Some great definition there. Skin texture too. This person has surely lived a rugged life.
This arm and of course the hand has a great shape and pose to it. Joao must have found some decent reference images for the anatomy.
Slight mould line along the top of the arm and between fingers but some light scraping and sanding fixed those. Just have to be careful on textures areas. Don't want to smooth it really. 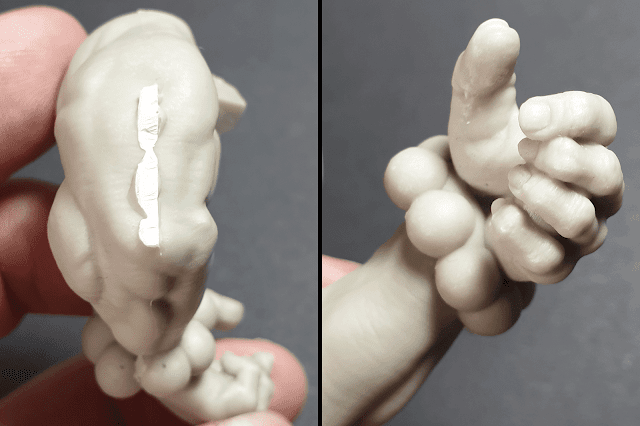 Again, more great looking sculpting but one of those "ouch" moments when finding that area to clean. Took some careful trimming and almost carving across it to follow the direction of the surface texture.
Inside the thumb really wasn't and issue as you don't see that area once assembled anyway.

Now I'll be completely honest here. I have no idea what this actually is. But I like it. Can picture it being filled with either food or drink. Beer or ale most likely, or perhaps a strong rice wine. Either way it has an interesting design to it, especially with all the looped rope and string.
As for cleaning...was pretty much limited to trimming the key to make sure it sat flush and a little mould line that faces the join anyway. Just too simple that one. 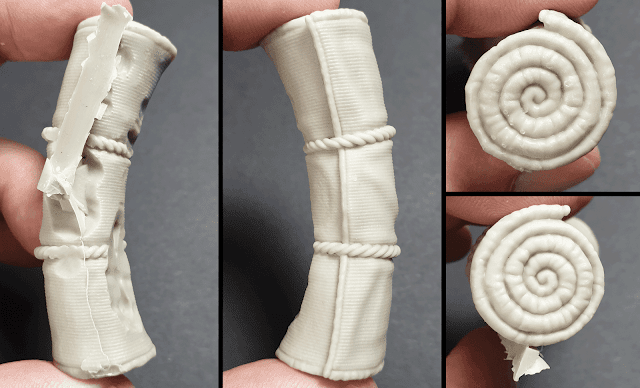 Bedding! Every adventurer needs a little comfort surely.
Again we find more textured material but I can excuse that as it does have a bed roll sort of look to it.
Seeing that extra resin and line did have me a bit worried I'll admit. Plus I wasn't too sure with the shape as there is many odd shapes cut into it. But the excess came off much easier than expected and almost all of those cuts match to other parts ridiculously well. There will be a little filling work needed though as you can see at the bottom of the first photo. 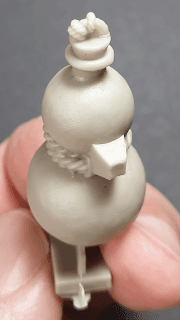 Now this I do recognise. Have to blame Jackie Chan in 'Drunken Master' for that. So perhaps the larger container is food. This is definitely his drink to keep him going though.
Bit of trimming and sanding on the bottom section and finding that it, like everything else, fits into position perfectly.
These cuts digital sculptors pull off are really getting insane in quality and precision. There's only a few traditional sculptors who come to mind who are equally impressive.

Here you have a choice to make.
A large lantern which reminds me of the paper and wire type that were popular in the 80's for their oriental style. This one possibly weighs as much, if not more than the real full size thing. Slightly tricky to clean the bottom excess and a bit of mould line on the sides. Thought there is also a hint of print lines running through this part. Perhaps I need to start looking at different primer sprays. One that is a bit of a light filler aimed at 3D printed items.
The other options is the...ahem... dangling balls (really sorry...not. I can't help it). Much less weight but no where near as impressive as the lantern.

Last up is a massive polearm like club similar to a Kanabo used in feudal Japan and often a weapon seen pictured with Oni daemons. The spiked head is similar in size to most gaming miniatures and I wouldn't recommend finding it with your foot if you drop it.
I did need to drill the hole out so it would fit into place. Easily done but when all the rest of the joins were so well cast it was a little odd to see.
There was also a piece of excess resin the full length of the pole but it came away easier than expected and only left a little cleaning to do. 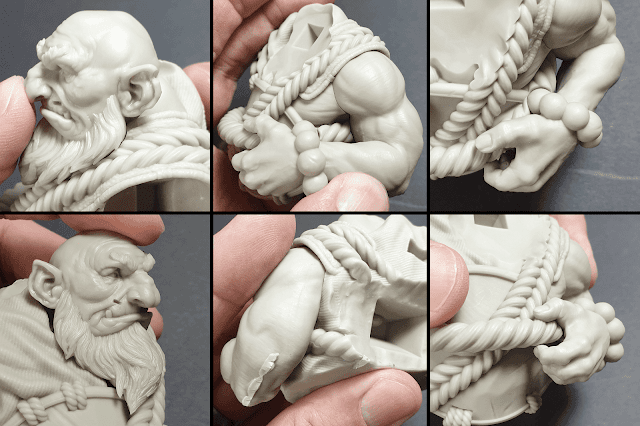 As you may already have guessed, the joins and assembly are pretty nuts.
There is just one area that confuses me though in regards to sculpting decisions. That is to do with the ball bracelet and the rope on the inside. Sometimes you'll find on a digital sculpt that a part completely cuts through another which can look a bit odd. Sadly this is one of those. At least it's a slightly hidden area so I may be able to look past it. 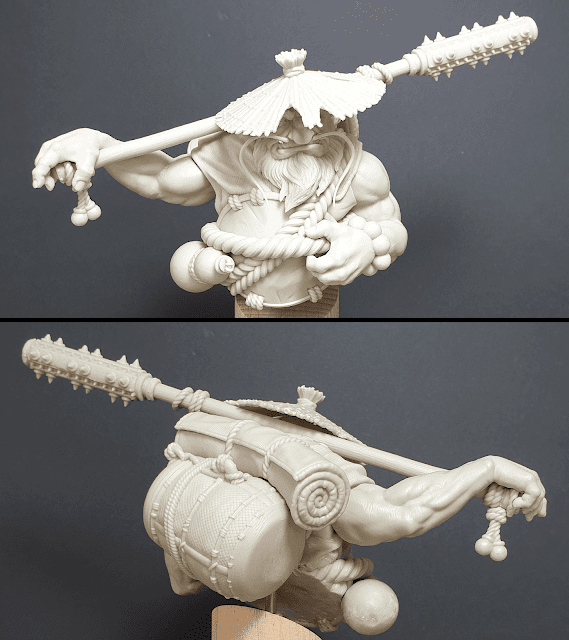 Dammit!!! I forgot to talk about the two parts that create his moustache. Well, if you (like me) like slightly cheesy Chinese Wu films then you'll love the look of them. I do.
Frankly the combination of the whole oriental monk look coupled with Joao's sculpting and cut designs really gets me smiling. Really needs some large brushes and a more substantial plinth to really take his size. Oval perhaps. But yes; I do definitely intend on trying to paint this though I may need to really just go for it because it's a serious size.
As for the price... just £50! Pretty cheap for the sheer amount of resin you get so well worth a look if this takes your fancy. 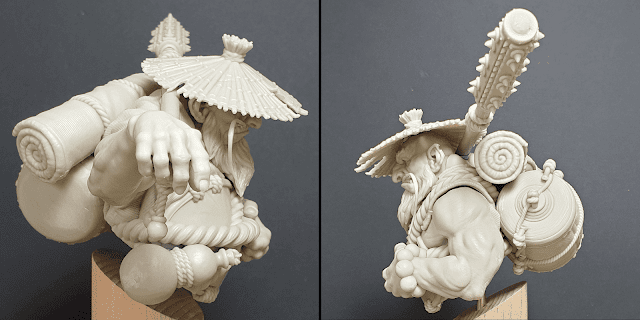 Where can I get Kumarajin?

Directly from Mr Lee's Minis at https://www.mrleesminis.com/product-page/kumarajin
As with any company these days you can find and keep up to date with Mr Lee's Minis on social media on Facebook and Instagram so give them a like or follow.
Thank you for taking your valuable time to check out our reviews. Stay safe and happy hobbying.

Want to support GMR?
Have a product you would like us to review? Contact us and we'll be happy to talk.
If you would like to Donate to the running of GMR, anything is greatly appreciated.
Written by Steve Haydon (Forté) on Monday, November 16, 2020
Email ThisBlogThis!Share to TwitterShare to FacebookShare to Pinterest
Labels: Bust, Dwarf, Joao Ferreria, Mr Lee's Minis