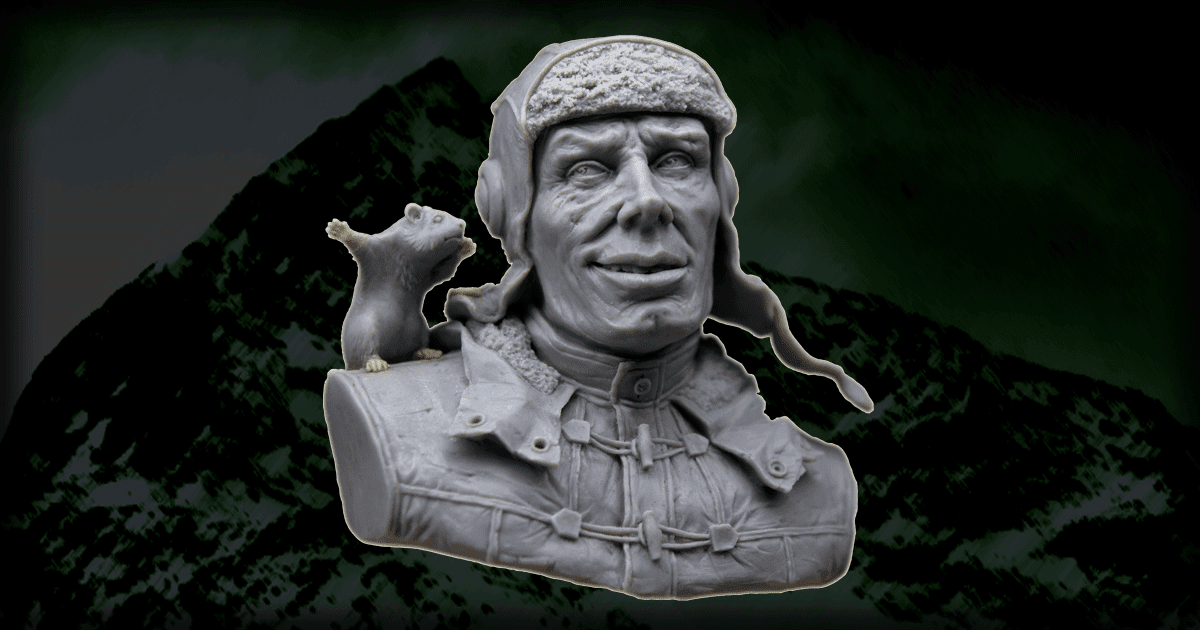 Welcome back my fellow GreyMountaineers to the 2nd instalment of reviews from the Veiled Lamp brand.

As many of you already know, Seb Archer is one of the best talents in the sculpting and painting world and has launched his newest brand. We are delighted to have the chance to review his sculptures.

The 2nd release from Veiled lamp is called Radley and Bellow Roos Explorers of the Northern Tundra, and apparently this pays homage to one of Seb’s favourite games. After a bit of Google shenanigans I think the game is Baldur’s Gate?

Boo is a miniature giant space hamster who is the companion of Minsc. While the homage is being paid, there is actually no similarity to Minsc, and only the hamster bares resemblance but only because it is a hamster haha.

The sculpture was done as a study into a well travelled and weathered face, which also takes inspiration from another great sculptor Romain Van Den Bogaert, whom is also a super nice guy and we have reviewed some of his pieces here on GMR. 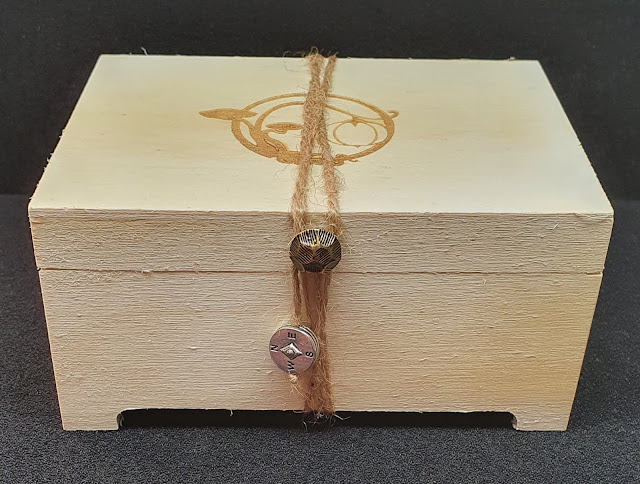 Radley and Bellow Roos is a 1/11 scale traditionally sculpted kit and is cast in resin and has 3 parts to the kit.

Each release has arrived in its own nicely presented box and this time we have a full hinged wooden box secured with a pin and yarn with a small compass trinket on the yarn. I love this kind of presentation from companies as they build a rapport with the actual kit when most boxes are throw away bin fodder. Boxes like this are very much a keeper.
Inside the box is a wood shaving birds nest hiding the kit like away like new born chicks waiting for their feed. 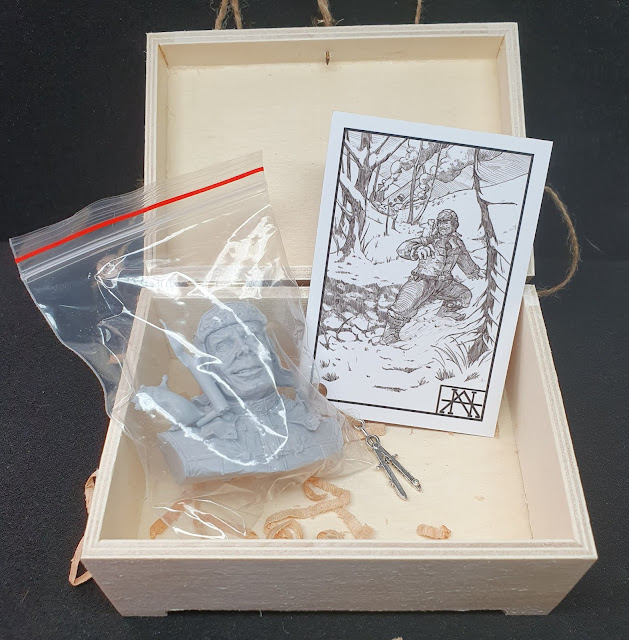 We also have an art card which has a trinket attached in the form of a navigators tool called a Divider. These are used to measure distance on a map.

The art card is produced from a wood print from the very talented Nicolas Amaroso who has worked with Seb several times, including the Twisted game from Sebastian’s other project with Peter Overton, Demented Games. 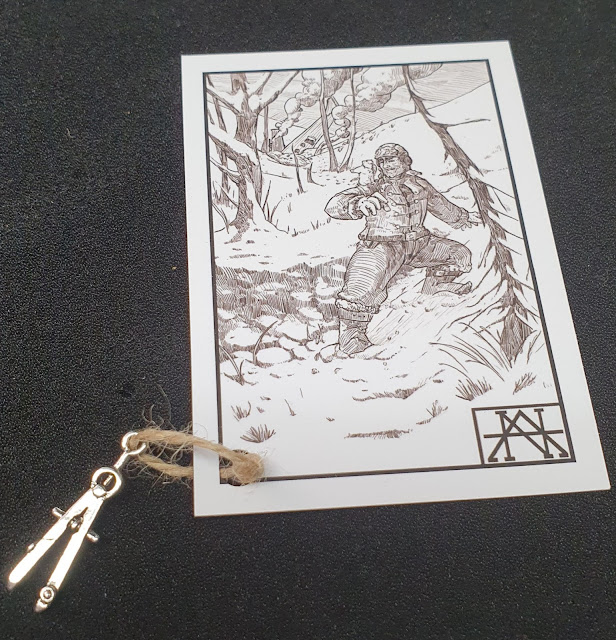 The wooden Prints are done in the traditional Japanese style and the artwork shows a little background to add that extra immersive experience with this kit.

Presentation wise this gets high kudos indeed and all the bits will be kept safe for sure. 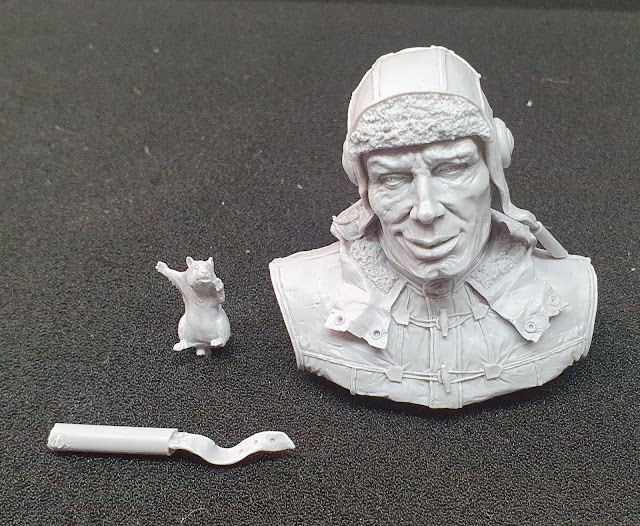 The torso is a two piece cast it has been reproduced really along with one strap separate. The gates and vents on the underside of the bust have been placed well and the mould has been cut to minimise the mould lines, of which there are none.

The only visible casting marks are the gates and vents which can be sanded off and you won’t see the underneath anyway when it is in place on a plinth.

The Hamster is cast the same. Zero mould lines or flash but still attached to the gate, as is the strap which will need attaching to the helmet. 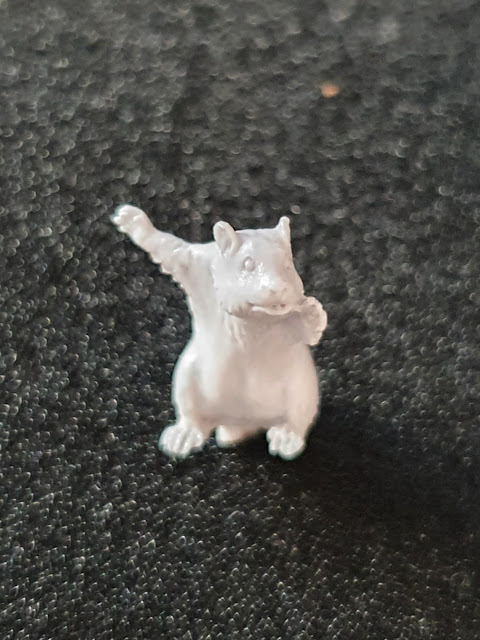 The casting has been done really well so hats off to the caster.

The actual work that has gone into this sculpture is outstanding.

If you look closely at the details you can see how the leather has synched and pleated at the seams. There is small details like buttons and press studs, along with peg and loop buttons on the front. 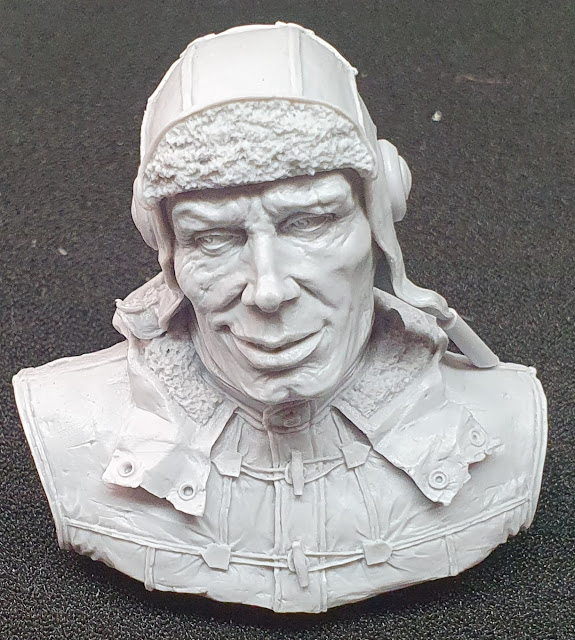 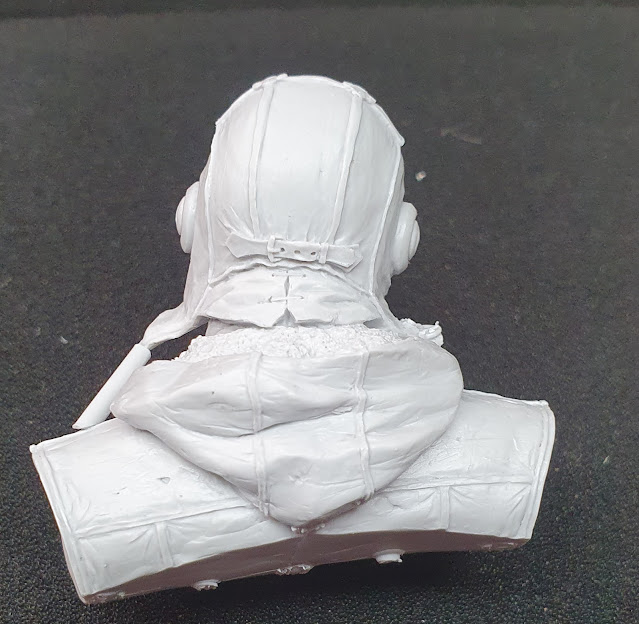 The strap and buckle on the back of the flying helmet as well as the stitches are just details that bring sculptures like this to life. The way the leather sits and creases is done so nicely too.

There is just something about traditional sculptures that blast 3D out the water for me. There are some flawless 3D sculptures but you just can’t replicate hand craftsmanship with a computer.

The whole kit is posed with the hamster whispering into Radley’s ear and he is listening intently with a half smile and a turn in his eye to suggest they are in full communication. In times gone by I would normally not like a sculpted pupil on a miniature but as I get older, and my eyes fail, and my hand shakes more, I just can’t paint eyes anymore. So I think for me this is a good thing now but I am aware others don’t like a sculpted pupil. In this case I think it lends itself to the story.

So, in conclusion I have to say this kit as a whole is simply lovely. I understand it will not be to everyone’s cup of tea but I personally like it. From the presentation to the execution it is a quality kit and only commands a $60.00 price tag but don’t forget that is Australian dollars, so that is around £33 in the UK... Yes £33.00 for a limited edition run there will be a shipping cost too but still when all is said and done this kit is a freakin bargain.

The run is only 150 copies so if you want one then head on over to www.veiledlamp.com and pick ya self one up.

While you are there check out the previous review piece of Persephone which is also a bargain. Also, make sure you give them a follow on their socials on Facebook and Instagram.

Well, thank you for reading this and I hope it helps you decide on grabbing a copy of Radley and Bellow Roos.

If you do decide to pick either kit up just let Sebastian know you read about it on GMR, this would be great help.

Thanks again for reading and as always please please remember to not drink the paint water.


Want to support GMR?
Have a product you would like us to review? Contact us and we'll be happy to talk.
If you would like to buy us a coffee or Donate to the running of GMR, anything is greatly appreciated.