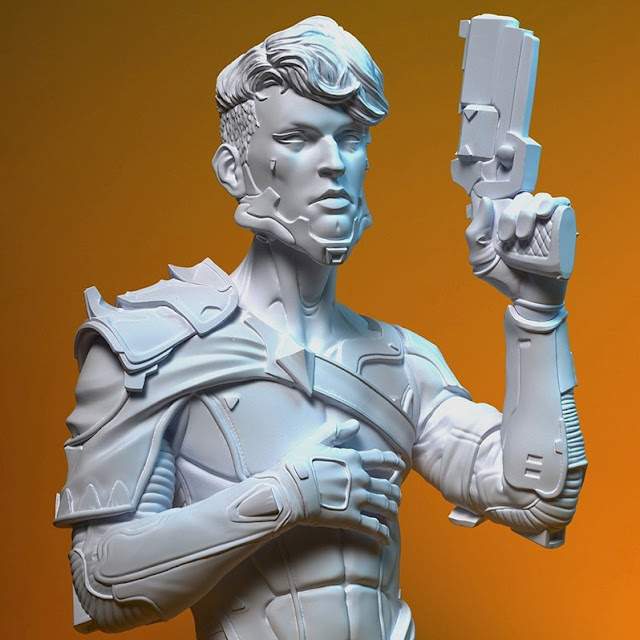 Operation Knox is the first large project from Mr Lee's Minis and has been a labour of love from Mr Lee's owner/ director, Kyle. Being designed completely from the ground up from concept to retail rather than drawing on already existing art and imagery.

Now then. Before I get going I need to explain something for complete transparency so you know my part in all this. I work with Mr Lee's Minis since the start of 2020 and have been friends with Kyle for a number of years now. It would be easy to just say "this is incredible; go buy it!" but that wouldn't be fair on yourself who put your time into reading these reviews, or to Kyle who expects my honesty and wants to deliver the highest quality product he can. 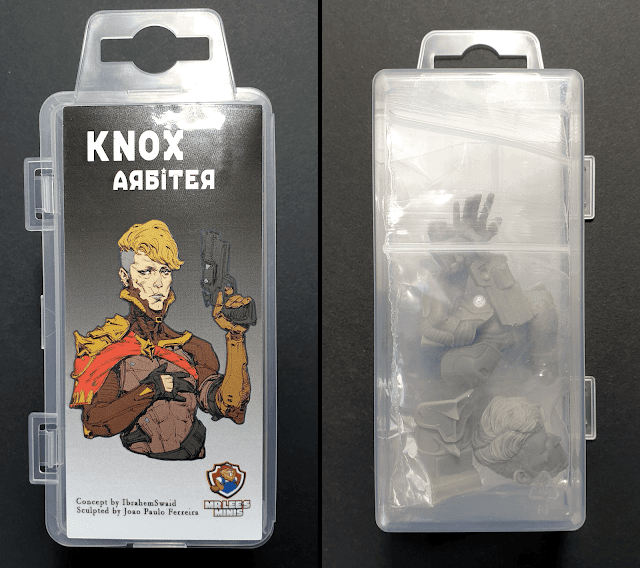 I need to tell you that this is one of the test casts. A first batch for quality control. On one hand it's exciting to see something before the general release. On the other it's a chance to highlight any potential issues to feedback to Mr Lee's Minis.

You can expect the standard packaging of choice of Mr Lee's Minis. Sturdy, deep plastic box with a flip open lid. No painted box art but a glossy label giving you the concept art by Ibrahem Swaid and other details like the busts name and sculptor.


Speaking of concept art and sculpting; Mr Lee's Minis have been showing these on social media for a little while and I'm the sort of person who likes seeing stuff like this. For me, the concept art gave me a bit of a nostalgic feeling. Old comics and animations from the 80's and 90's like 2000AD and Aeon Flux instantly sprung to mind. All five concepts were character filled individuals and it grabbed me as soon as I saw it.

Kenton Moore has even written a short background for each character too. Helps you get some ideas when you come to painting them.

As for sculpting; Joao Paulo Ferreira has really been getting his name around the past couple of years for sculpting miniatures. I can safely say he's done a great job on the digital sculpting as you can see here with the renders all together. I'll explain later why I chose the team member that I'm now reviewing. 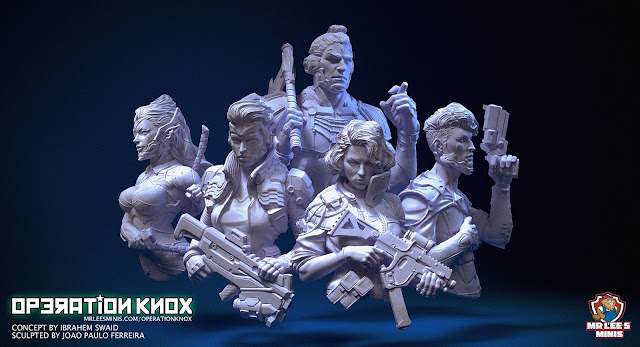 Enough of the background part though. Time to really look over Arbiter. 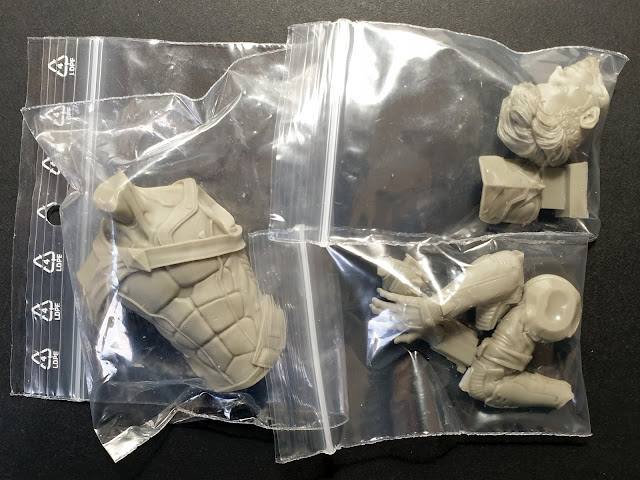 Three zip lock bags were held within the box so minimal contact between the separate parts. Can already see through the plastic that there is only one large pour part to remove. 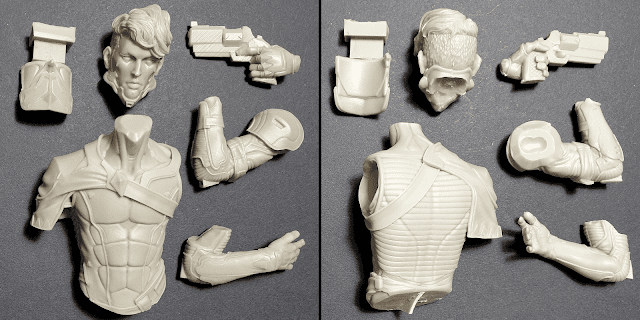 Six parts in total. I was a little surprised to see the shoulder armour and right arm are separate but that does add to the overall dynamic as when assembled there are gaps and undercuts which wouldn't be able to be cast in one piece.

Can already see that there will be some prep work needed. But I enjoy that anyway (and have even done near six hours on one figure before. That was my limit though).

Lets start at the top. Joao has avoided my digital sculpting pet hate and broken the symmetry in the face. Very subtlely and took me a while to work out where. No sculpted eyebrows but what look like long eyelashes. Something more seen on female sculpts.

He has two small bumps on his cheeks which are in the art too. I'm guessing they're some kind on piercing. No idea why but it's different. 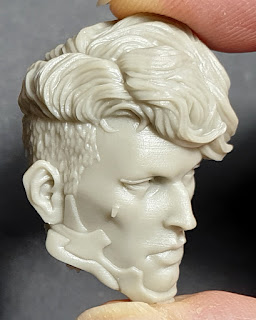 Great shape and definition. Especially that hair, and hair is something that to me really stands out with this range. They all have actual believable hair styles. When it comes to Arbiter it isn't a style connected with your usual masculine miniatures and busts. It's touches like that which I'm impressed with and drawn to.

You have also likely noticed many tiny lines too. If you're unaware, those are print lines left from the master print and something I've spotted quite a bit when looking this test cast over. Also one of the main things fed back to Mr Lee's Minis. If you're a spray can primer sort of person (like me) then I doubt these will even show once sprayed. But some airbrush primers are pretty thin. Fingers crossed this will improve with the next batch of casts.

The main body section has some interesting clothing details along with a main mould line running up along the right side up to the bottom of the shoulder. This did clean up with some gentle sanding and running a scraper and scalpel blade along to get into the lines.

Along the edges of the shoulder cloth and the body cut off you can spot quite a lot of bubbling. Much of this opened up when I sanded these areas while cleaning, though I opened more up with a pin so I could fill with a little Milliput. Wonder if that's anything to do with the pressure pots used or quick turnaround of test casts with the resin not quite finishing degassing. 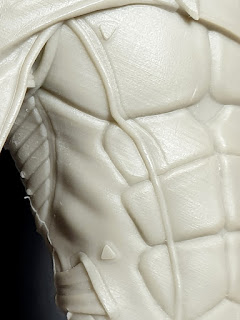 You can see more of the print lines on the chest image. Though that's not why I've added this photo.

I wanted to show a little attention to detail that Joao has one which makes me picture the suit as some kind of rubber based armour.
Look at the two triangles. And see the slight push marks around them. Nice eye for detail.

His shoulder plate still has that large pit of excess resin attached. Kyle has actually been doing some prep on these busts pre-packaging, as many companies do, but I'm glad he left this one as it could cause a loss of detail if you're not careful.

I used clippers to reduce it to a bit just a couple of millimetres thick and then trimmed and sanded the last of it. Reducing the chance of me causing damage to the shape of the edge. However; I did also take a line off the largest point which I've noticed is actually part of the concept design so I kind of messed up there. Oops.

Fit wise, it has a pretty much perfect connection for where it goes. Have to love digital sculpted cuts. 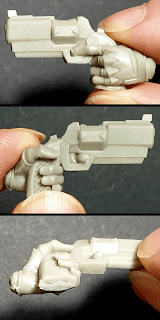 If that huge revolver doesn't scream cyberpunk then I don't know what does. Solid, bulky, but simple in it's design. Quite a contrast to the more complex assault weapons held by Fox-Jupiter and Neutrino.

The surface does show probably the most print lines though.

Pour point was cut pretty close on the handle. Perhaps a little left to sand flush could be good. There's a little mould line along the bottom of the hand to clean up. Otherwise; not much to do... so I drilled out the guns barrel. Not something I often find myself doing on busts but a little extra detail I like to add to my miniatures. 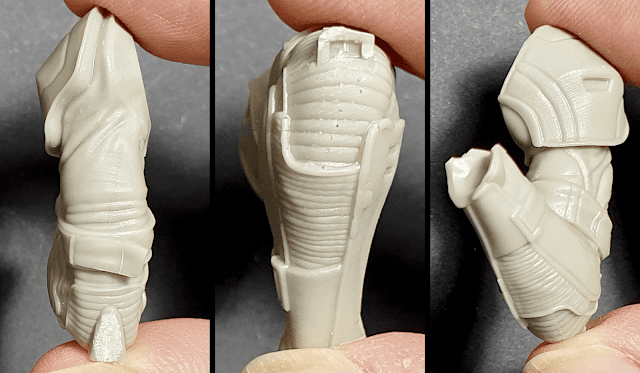 Both arms have similar issues. Bubbles around the elbows where the pour points were. Those pour points had been cut off a bit close too so I didn't have much to sand and smooth. That is another point I've fed back from an initial look over the cast.

There is a slight mould line running along the outside of the upper arm. Nothing major though.

I wanted to show the inside of the right hand. Purely because once Arbiter is assembled you cannot see it. Bit of a shame for sculpting touches like that to not be seen I feel.

Much more work to do on mould lines on this arm. The one on the inside of the cast was tricky due to the angle. Had to go easy. 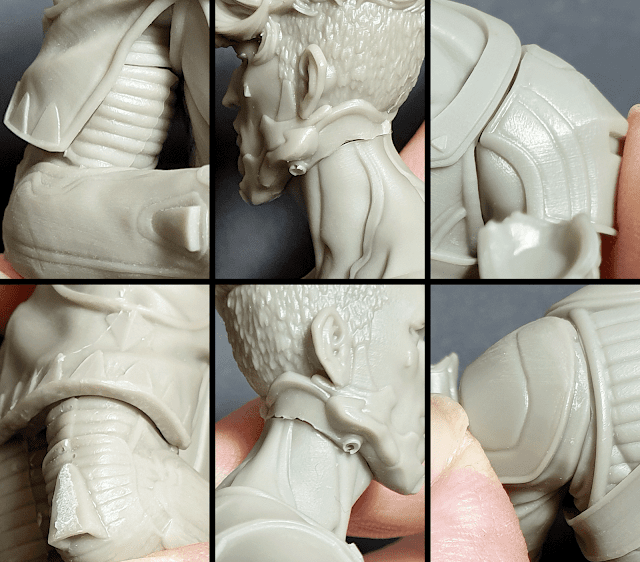 Joints on this bust aren't your standard key and socket type. They all have slightly more shaped connections which match up pretty well and won't require much or any filling or pinning (though I did pin because I like a solid join).

You can see more of what I mean about the joins in the 360 video.

By now you might have worked out some of why I chose Arbiter out of the five characters.

He's different to majority of the male miniatures and bust available on the market. Much of the time male sculpts are muscular and more looking like strong barbarians or body builders. Overly macho. Arbiter has a slender build and isn't posed in an overly masculine way. Much more arrogant and aloof. 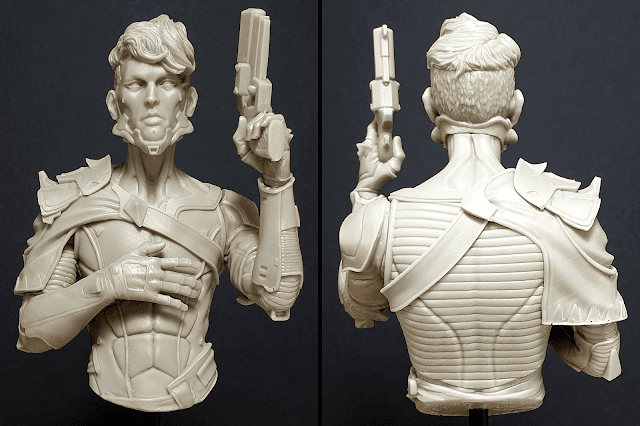 As you might have realised, I really like the design and sculpt of this member of the Operation Knox team. It stands out as being original and something a bit different.

Quality wise, the resin is good and solid. Handles being cleaned up really well. Lucky with the tiny bubbles present. My only concern is the faint print lines but I'll be able to update better once I've given it a spray with primer. Hopefully it'll improve though with the next batch of casting. But details are well rendered and defined. And at around 85mm in height I'm looking forward to having a go at painting him. 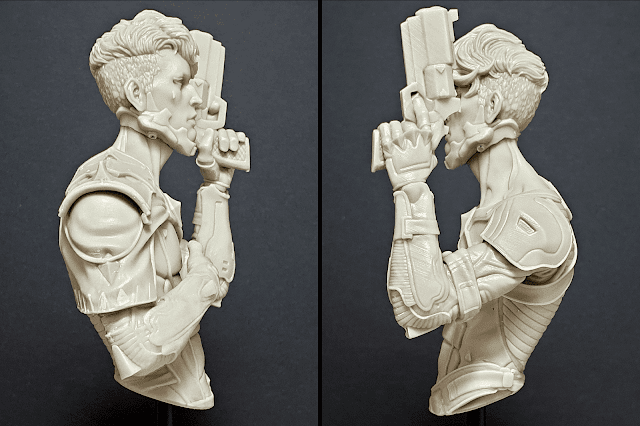 Arbiter and the rest of Operation Knox are available directly from Mr Lee's Minis at https://www.mrleesminis.com and are on a pre-order discount until March 14th 2020. Usual price for Arbiter is £45 which is pretty reasonable.

Feel free to leave comments if you would like to know more.
Many thanks.
Written by Steve Haydon (Forté) on Monday, March 02, 2020
Email ThisBlogThis!Share to TwitterShare to FacebookShare to Pinterest
Labels: 1/10 scale, Bust, Mr Lee's Minis, Operation Knox