Portraits From The Middle Ages busts from FeR Miniatures 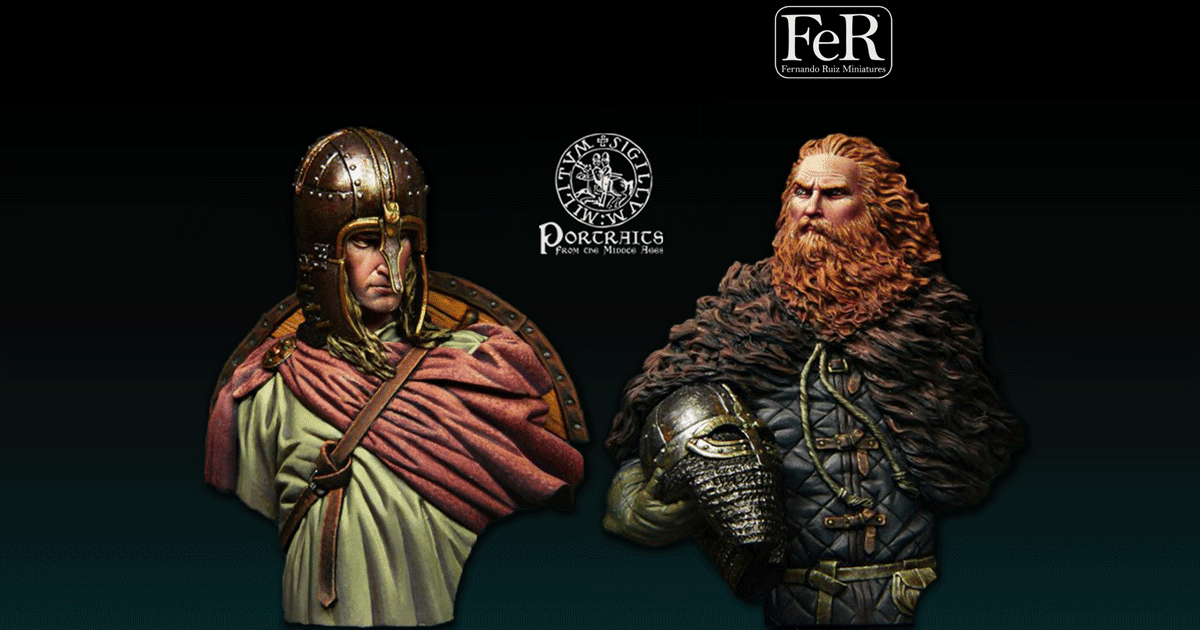 Back in 2016, FeR Miniatures launched the first two busts in their Portraits From The Middle Ages range. A range of Middle Ages busts in 1/16th scale sculpted by Paul Deheleanu.

Now in 2020 we have the next two additions to the range in the form of 'Northumbrian Theng' and 'Ivar the Boneless', Jórvík, 866.

Jórvik (or York in the UK as it is known now) was controlled by Norse warrior-kings. First captureed in 866 by Ivar the Boneless leading a large army of Danish Vikings known as the "Great Heathen Army". But that's enough history for now.

Both busts are packaged in zip lock bags inside sturdy clam shell boxes. Many companies are using these and I'm not surprise at all. Especially seeing that these came from Spain to the UK in a padded envelope. As you can see, completely intact.

Labels nicely show Fernando Ruiz's box art painting and gives you the important information of bust name, sculptor, painter, and range. Always like to know who is involved in creating miniatures I look at. 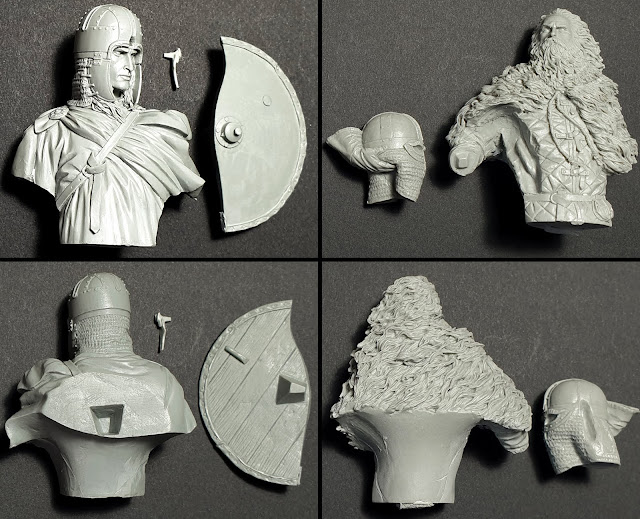 Nice and simple. Just two or three parts and noting too taxing unless you're butterfingered... and yes, I did drop that small part... a number of times. Oops.

Starting with the Northumbrian Theng; you can easily see well defined details and materials.

Straight away you can see a good knowledge of how cloth folds. Can easily see that there's a cloak of some kind so you have two main cloth areas to play with. They look like they will be good to practice painting volumes and light direction on.

Armour wise you have a really well recreated version of the York Helmet found in 1982. There are some great photos of this helmet so have a search up to see more on that.

The face is excellent and a nice contrast to the older looking Ivar. Good decision to cast the nose guard as a separate piece.

Mould lines are really minimal and only need a little scrape and sand which is excellent because you can get painting quicker.

Can see the chainmail detail from these photos too. Not the most defined but give a good feel for mail armour. Just a slight flat spot which can be seen in the left photo. 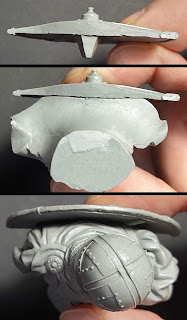 The shield is a classic design for the time and gives you a nice flat area to play with. Good wood and rivet detail on the inside to paint too.

Can see how well the two parts have been cut and the key to hold it i place is substantial.

Under this bust is where you can see the most cleaning is needed. Hobby knife and sanding pad had that sorted in no time. Plus with this having a flat cut off you don't need to mess around with any tube or rod to attach it to a plinth. Though I would recommend pinning to be sure it stays mounted. 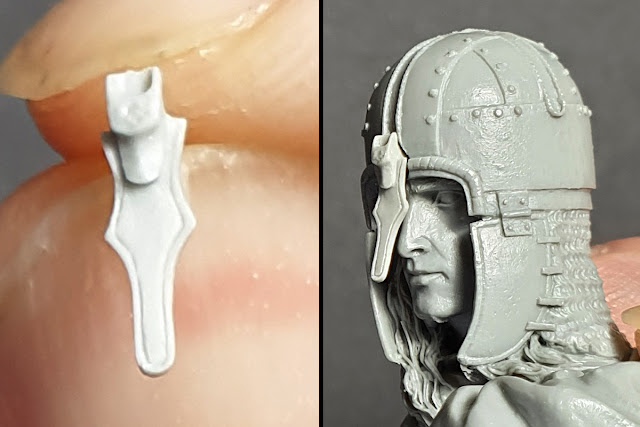 Had to show the nose guard. Tiny piece and yes, for those of you who know the York Helmet it is missing some fine detail. But at this size that is very much excusable.

The fit is really close and only needed a little scrape on the key to fit it near perfectly.

Nice view of the face too.

And now Ivar the Boneless or Ivar inn beinlausi in Old Scandinavian. Have to say it's an odd name because he must have had bones. Though that might refer to a hereditary skeletal condition such as osteogenesis imperfecta or to an inability to walk. Finding historical image or statue seems to be pretty impossible though.

So much hair and fur on this bust. Almost tricky working out where one ends and the other takes over. Very cool though. Almost screaming for some snow effects. 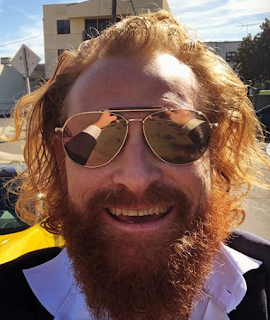 Now there is an obvious elephant in the room with this bust...

And yes... I do feel it looks influenced by the look of Kristofer Hivju. Especially his role in Game of Thrones.

But honestly; if you want to give the feel of a legendary Viking invader then you can't really go wrong by looking like this. 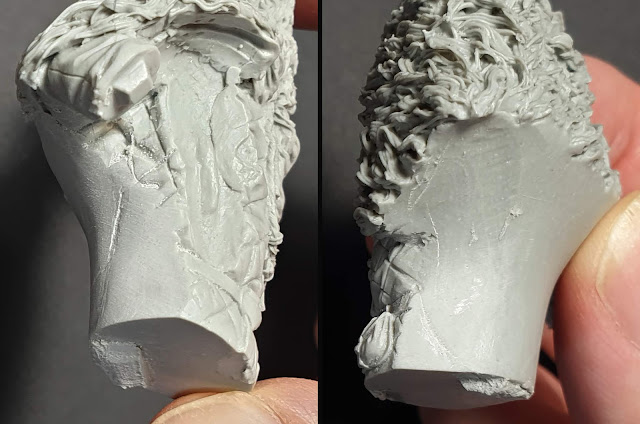 Mould lines and clean up is similar to the Northumbrian. Fine lines on the undersides which look to have already had some work done, and some excess to remove on the cut off area. Nothing taxing or distracting at all really.

Good to see a more realistic helmet style too. No horns or silly parts sticking out. Possibly influenced by the Gjermundbu helmet. But there aren't really many good examples of real Viking helmets. Just many fragments.

The sculpting is good and has a nice feel of the movement chainmail has.

Again; another excellent cut which fits snug and won't need any drastic gap filling. Bit of cleaning and a little putty, gel glue, or even PVA should do it. 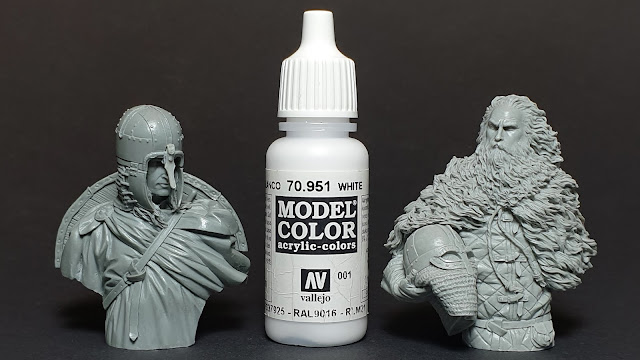 Like I said though, these are 1/16th scale busts. Not much bigger than many Games Workshop figures. A good entry size if you're looking at having a go at bust painting and want to try something historical or prefer a fantasy feel.

Listed as 28€ (including tax) or around £23.50, the price is pretty comparable to a GW hero too, but with less clean up needed and no soft details due to the plastic moulding limitations.

The resin here holds the crisp details excellently and is easily cleaned up where needed. 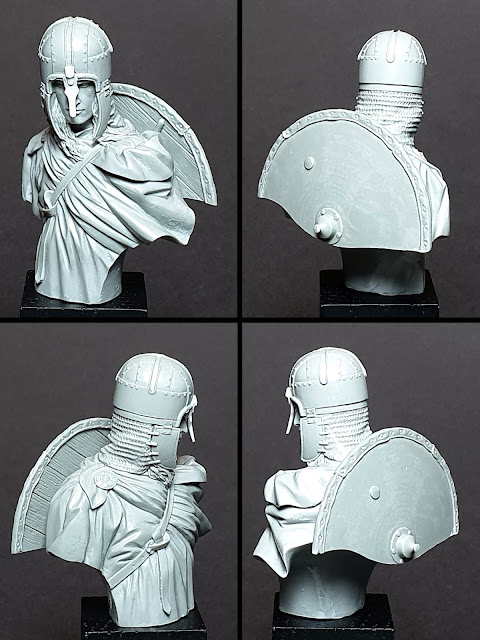 Definitely. The range started in 1066 which was a period I studied at primary school. Plus I've always preferred the Middle Ages to most other historical periods. Not totally sure why. Possibly because fantasy draws so much influence from the period perhaps.

However; I reckon I sway more towards the Northumbrian Theng than Ivar. Will be interesting to paint and put next to my old Latorre 54mm Northumbrian Theng. Plus all that hair and fur on Ivar scares my brushes (okay, I'll admit it. I struggle with hair and fur). Maybe you'll see Normski painting Ivar in the future? 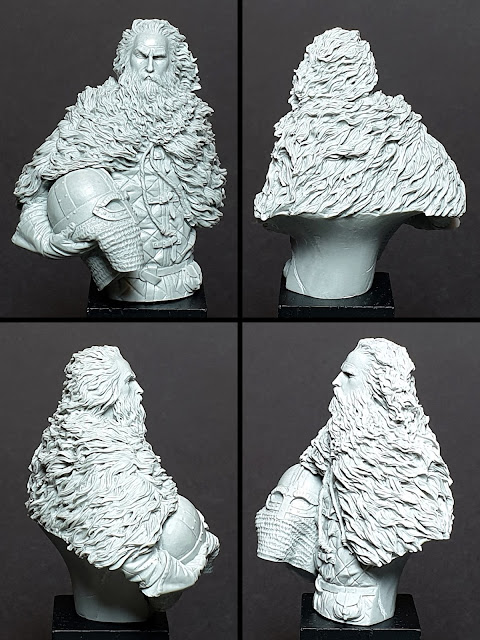 If you would like to pick up either of these or ever the 1066 pair then they are available directly from FeR Miniatures at https://ferminiatures.com/product-category/portraits-from-the-middle-ages/ or from their official stockists.

You can also keep up to date with FeR Miniatures releases on their Facebook page, Instagram, or Twitter.
Written by Steve Haydon (Forté) on Friday, May 22, 2020
Email ThisBlogThis!Share to TwitterShare to FacebookShare to Pinterest
Labels: 1/16 scale, FeR Miniatures, Portraits from the Middle Ages