Back at the start of 2020 I was treated by the lovely people at Juweela to a mixed selection of products from their huge range of scenic materials to review and show to you. Trouble I found was figuring out how best to really show them to you.

Back in 2019 I reviewed their Juweelinis set aimed at 28mm, which is a fantastic taster set which really impressed me and you can check that out here.

Now Juweela have been making scenic products aimed at the railway and scale model market for many years but have been working towards increasing their products in scales more suitable for use with gaming miniatures and those sizes more common with us figure painters which is a great move. 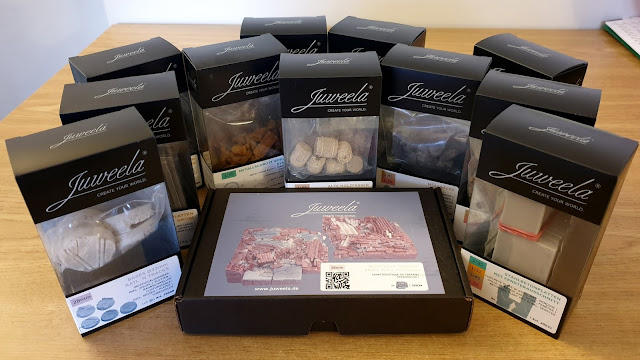 As you can see, I have a lot to look over. So rather than just open the box and show you I thought I would show what can be done with these over a series of articles rather than dump it all in one go and leaving it at that.

I knew I had a little scene which I put together a couple of years ago (you know you do it too so stop judging) which just didn't feel like it had enough street detail so grabbed a couple of packs to see how adding a few bits can give a scene a little more life.

So there you have it. Pretty basic scene with paving and a corrugated steel fence. But it really needs more and frankly I'm a little lazy when it comes to making small details.

After a check through I thought I'd try these bin bags (garbage for many of you outside the UK). Something often seen dumped. Especially on collection day. 1:45 and 1:50 scale are ideal for 28mm minis. 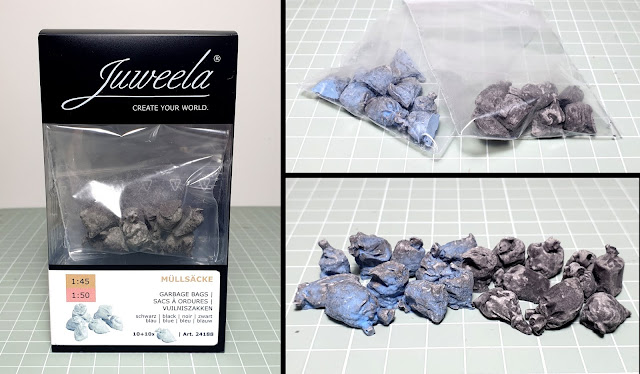 Now these are made from ceramic like the majority of their products. That gives the added option that you can cut and sand them (or break and crush in the case of bricks and paving slabs). That means that I could easily have half a bag on the edge of the basing as an interesting cut off.

The packet contains 20 in total. 10 blue and 10 black. But you know us miniature painters will paint them so the colour isn't important. Likely more aimed at railway and scale modellers.

Just adding two bags gave a different scene and maybe story too. Happy with the change but as with stuff like this, until you glue things you can still play around. And so I grabbed metal scrap rusty (that's it's name).

As you can see, this pack is 1:35 scale so closer to out 54mm figures, but I was interested to see what would be done. And to check out what the pack means by "real rust".

These are again moulded in ceramic so you could cut parts to make them look part buried in the ground. And yes, that is real rust coating it which does give me some ideas for salt or hairspray chipping done before priming. But I haven't got around to trying that out yet (sorry).

A few interestingly shaped parts later and a lot of placing, moving, adjusting, mucking about... oh you know where I'm going really because we all do it when trying to be creative. This is what I came up with.

But I can't just leave this article at once base, and so...

I recently painted a Primaris Space Marine for a challenge set by Spud from Chilling Wargamers (check their site for more on that). So I wanted some base details.

Debris of bricks with mortar droppings spring to mind.

These are a mix of their 1:45 and 1:50 bricks but they have some extra texture added giving them the look old, used bricks from a damaged building or wall. But I wanted more because just one detail isn't enough for me these days. So out came the rusty waste again and I found what looks like a gas bottle. 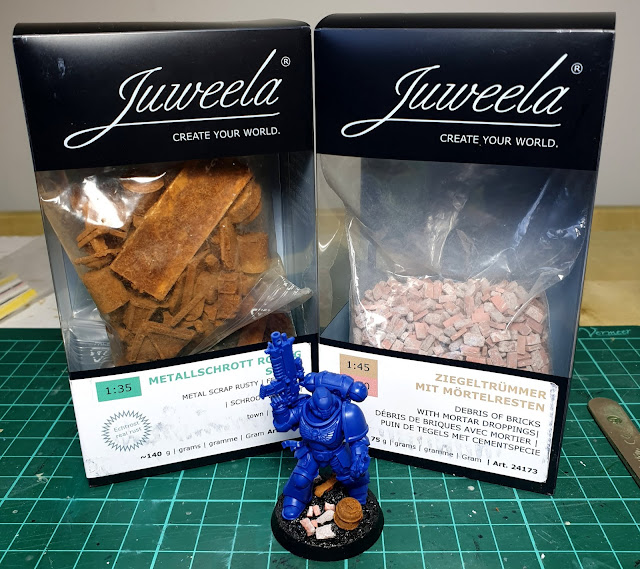 Bit of basing texture paste and pressing the parts into it and withing five minutes (plus drying time for the paste) I had an urban base I was happy with.

Now then... good news is, that rusty waste takes primer and paint well. But maybe I should've put some liquid mask in a few spots to see how it looks with the rust showing. Next time (so long as I remember). 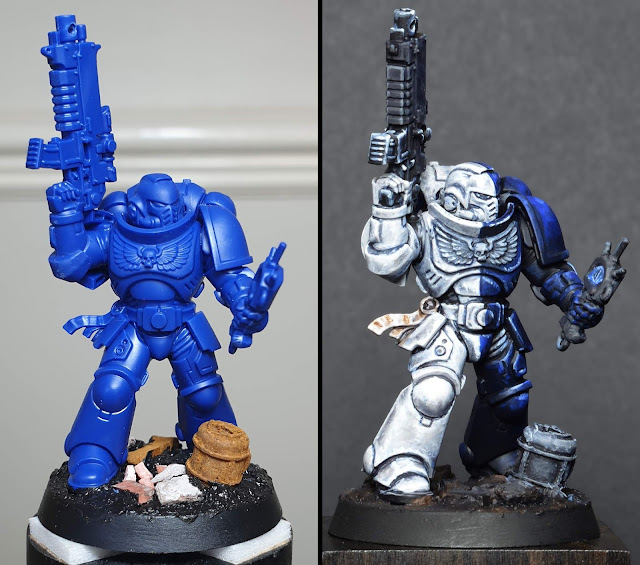 I only had three paints to use as this was a painting challenge but I do like how quickly I could put a base together and you may have noticed that I broke some of the bricks up too for even more variation.

As you can tell, I really like using these products and I'm looking forward to showing more in bases I create. Next time I think something with some 54mm post apocalyptic figures (which will be reviewed too) as I have a great Flexyway brick product to show.

Check out the Juweela website to see more of their products then have a go through their list of dealers here for where to buy from (support local if you can). You can also check their Facebook page too.